Is your fuel line transparent? If so, can you see fuel being sucked up the line from the tank if you hold your finger over the carburetor inlet while cranking the engine over?

No fuel at all was being sucked up in the fuel line Brian. I then made a little adapter to replace the carby and connect the fuel line directly in to the head. Just a slight turn of the flywheel and fuel shot up the line like a rat up a drainpipe. I guess the fault lies in the carby

Herbie-- You have to gasket every joint that you can. The fit of that center which revolves in the carburetor and turns with the throttle handle has to be a very, very good fit. All of the joints which screw together should be given a coat of clear liquid "seal-all" after they are screwed together . If you have anything that creates a vacuum, like the pick up tube on a sandblasting gun, a good test is to put a flexible tube between the vacuum pick up tube and the engine end of the carburetor air-horn. This simulates the engine vacuum. Put a second clear tube from the gas line attachment on the carb into a glass of water. Open the needle valve on the carb 2 turns. When you blow air thru the sandblasting gun, it will create vacuum at the pick up tube and suck air thru the carburetor, the way it would normally act on an engine. You should see the water being sucked up the tube from the glass of water, quite quickly. if you don't then you have a major carburetor problem. Make sure you have an air bleed hole in the screw on lid on your gas tank. Your test holds no significance. It is not the air flowing into the cylinder that sucks up the gas in the tank like a "rat in a drainpipe". As the air flows thru the air horn of your carburetor, it passes thru the restricted area in the center of your carburetor and this restriction creates a "low pressure" area, called the "venturi effect". This low pressure is what sucks up the fuel from the gas tank. the reason you momentarily put your finger over the carb throat is to quickly get some gas up to the engine to start firing. You only do this for a second or less, because you don't want to flood or hydrolock the engine. As soon as the engine begins to run, there will be enough hi-speed air flowing thru the carburetor to keep the fuel constantly flowing to the discharge nozzle in the fuel jet which is controlled by the needle valve..

Do you have a head gasket on the engine? It needs one, even if it's just cut from a cardboard cereal box. When you look down the air horn of the carburetor, can you see all the way thru it when the throttle is open. You should be able to. How "stiff" is the engine to turn over by hand? These little engines don't like friction, although with ball bearings there should be very little friction anyways. Are you turning the engine the correct way?--It turns clockwise when facing the flywheel side of the engine. If you try and "flip" the flywheel clockwise by hand, does it "bounce back" when it tries to go up on the compression stroke? If it is too stiff to tell, take out the sparkplug, liberally oil everything including the piston, and put a v-belt sheave on it, then drive it at about 600 rpm for two hours with an electric motor to loosen everything up---keep giving it the occasional squirt of oil--we don't want to burn anything out for lack of lubrication.

Thanks again Brian.i have used proper gasket paper and the rest of the check list checks out fine..absolutely no friction and good compression..I shall check out the carby today to check for blockages after Christmas dinner and the family have gone home. In the meantime I hope you and your family have a great Christmas.

Apologies to Bruedney and Parksy. I seem to have missed these posts.i checked the carby and somehow I managed to get a heap of solder into the spray bar preventing fuel from getting through. Drilled it out and started it up again this time I got a couple of puffs of smoke out the exhaust.i then noticed the large gear wheel wasn't turning so today I shall tighten everything up and try again.

Well guys--It looks like we are going to finish out 2016 with 3 Rupnow Vertical engines up and running. Keep me posted, I'm looking forward to 4 more that I know of for 2017.--Brian

My final update for 2016 - some small progress made, the top end is completely finished except for clean-up, plus I still need to make a spark plug.

And a family shot of my disappointing small collection of parts. I have the material for the frame and cylinder base plate but still need the cast iron for the cylinder, 1 more crank bearing (I got scammed on my purchase) and some sort of ignition.

Definitely be running some time in 2017 (almost certainly. probably...) 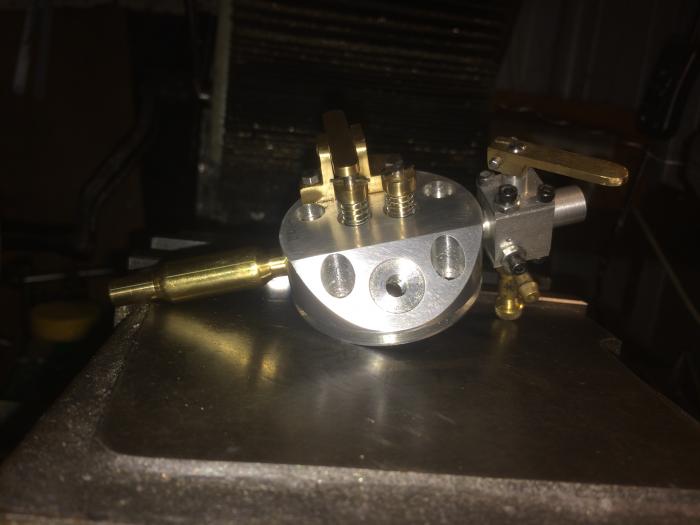 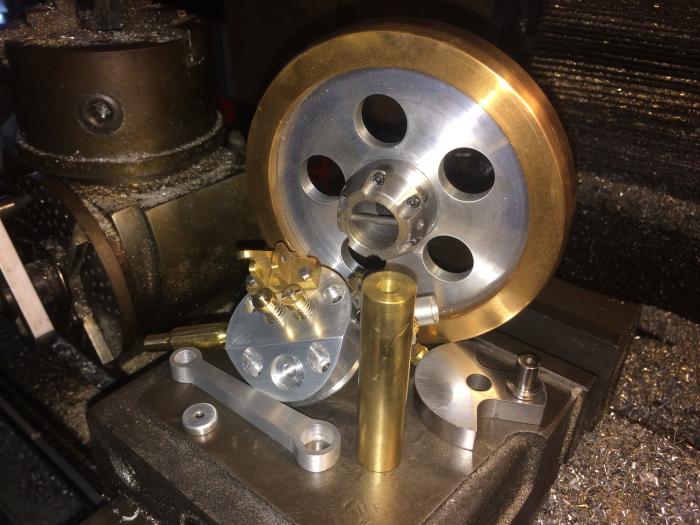 Herbie--did you give up on this thing or has it been too hot to work on it?--I'm hoping the snakes didn't get you!!----Brian

Hi Brian. It's bee way to hot lately. I have only got a tin shed with no airconditioning. With temperatures around 42 degrees C or 108 degrees F it's hard to concentrate on the job. Cool change predicted for Monday in the low 30s so hopefully back into it by then.

Herbie--It is - 15c here as I type this, with about 16" of snow on the ground and 6" more in the immediate forecast. if I could send you down some cool, I certainly would.---Brian

According to my Fitbit, about 10,000 strokes of the hacksaw yields one horrendous blister on my palm and one rough engine frame.

The second pic is the almost finished part - I'm really glad to have this piece behind me, I've been dreading that hacksaw work since I got the raw material.

Still no cylinder material and no extra funds in sight. I'm considering using some tool steel I have, which should clean up around 47mm, inside a bored out piece of seamless steel tube I have left over from my speedway days (roll-cage bar). It'll be a lot of work but it won't cost me anything so I'm tempted to give it a go. Not too sure how many more machining days I have before I have to get back into my research but I really want to get this engine finished. 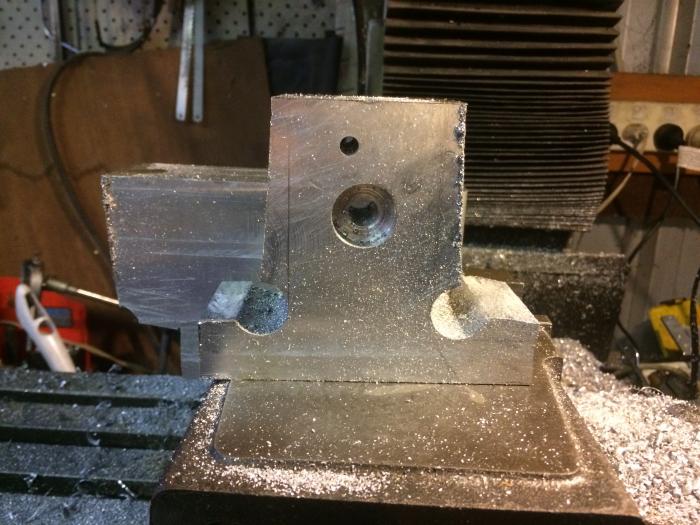 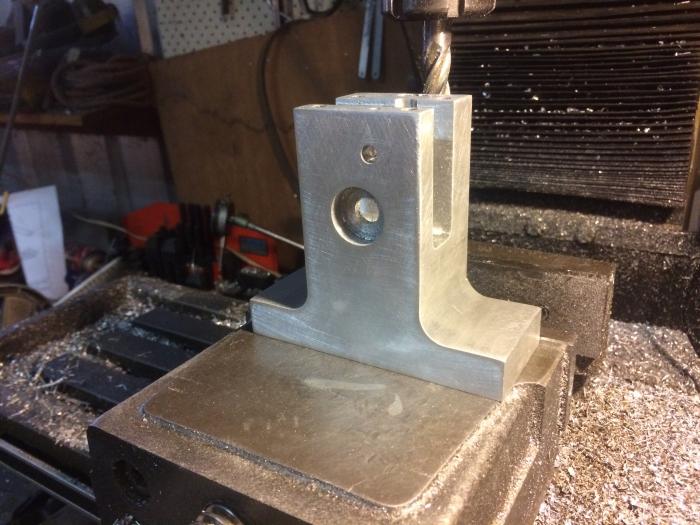 Al--I love ya!!! It takes real dedication to cut something like that by hand. Good on ya!!---Brian

Rain and cool change is here Herbie,no excuse you should be finished now

Cogsy said:
According to my Fitbit, about 10,000 strokes of the hacksaw yields one horrendous blister on my palm and one rough engine frame.

The second pic is the almost finished part - I'm really glad to have this piece behind me, I've been dreading that hacksaw work since I got the raw material.

Still no cylinder material and no extra funds in sight. I'm considering using some tool steel I have, which should clean up around 47mm, inside a bored out piece of seamless steel tube I have left over from my speedway days (roll-cage bar). It'll be a lot of work but it won't cost me anything so I'm tempted to give it a go. Not too sure how many more machining days I have before I have to get back into my research but I really want to get this engine finished.
Click to expand...

Al, I know how it feels, had to do the same myself, at least the hard bit is over.

Well I'm now getting very close. I actually got it running for a couple of seconds before there was a huge spark behind the flywheel. The cap screw holding the points in place had worked its way loose and totally mangled the points. Not sure if I can repair the damage or need to buy a new set. I shall check it out when it gets a bit cooler. Today it's 39 C in the shade and 43C in the shed. It's a pity you can't email me some of that sub zero weather you got there Brian.

I haven't forgotten you fellows. I've been a bit busy this past week, and keep looking for more running engines whenever I have a spare minute. Dang, Herbie, I can hardly stand the suspense!! If you had that thing firing a week ago you should be driving it around by now. Cogsy, I know all about the time and money crunch---been there, done that. Somebody named Franky contacted me early last week and said he was starting to build th eengine, but I guess he's too shy to put his build up on a forum. Bruce--what's happening with your build?- I have an idea for a new and wonderful engine that I want to start in February, but I have a couple of big design jobs coming up that may delay that a bit.--Brian.

Brian, mine's hit a snag in the form of a worn (or damaged) MT2 taper on my mill and awaiting a new one to come from agent. Then I have to fit it and tram the mill. Plus I have been laid up with a bit of a head cold which has not been condusive to workshopping. Hopefully some movement soon.