Making a Boiler for a 3 1/2" Gauge Locomotive

I've been putting this off long enough.

But first a warning:- boilers are pressure vessel and are dangerous they are not to be taken lightly, if they fail they can cause serious injury, so due care needs to be taken when you build one. Make sure you understand the boiler regulations that apply to your part of the world, and if you have no experience of boiler building, find someone who is that can guide and mentor you.

I did a lot of research on boiler building, to some extent this was a mistake as I found a lot of contradiction in design and methods, to such an extent that I was seriously looking into buying a commercially made boiler, but this would have cost up to £1500, but I began to realise that methods and thinking have changes over the years and talking to club members and the clubs boiler inspector cleared a lot of the uncertainty up, and with encouragement I decided to have a go at building my own.

To help you Guys to understand some of the term used in the UK I've done a Crap-O-Cad of the type of boiler I will be making.

By way of explanation of some of the terms:-

Supper Heater Tubes:- these are large tubes through which pipe work runs that takes "wet steam" collected in the steam dome back through fire box to give it an extra dose of heat.

Foundation Ring:- This fills the space between the outer and inner fire box

Front and Fire box Tube plate:- These are the plates that the Flue and Superheater tubes fit too.

I think the rest of the bits are self explanatory.

I bought a boiler kit for my Loco from Reeves it cost £290.

This is the kit of parts.

Everyone I've spoken to has given me the same bit of advise:- the key to good boiler making is in the preparation, so over the next week or two I'm going to spend time preparing for the build.

You have my utmost attention!

Wow, that's going to be a serious boiler.
I'm still building myself up to make a pot boiler to run at 15PSI. :big:
Look forward to watching this progress
G

Stew,
I'll be watching with great interest as I will eventually have the same boiler to build.

I will be following close...

Hey Stew, thanks for the CoC drawings, well done. Those copper pieces are just begging to be assembled and I am certain they will make a handsome pressure vessel when you are finished.'

I'm going to be watching too. And thanks for the definitions and labels!

Zee you've spotted deliberate mistake No 1 it should read March at least I got the year right ;D

Thanks again for your interest

Hey Stew, this looks like an interesting project. For me, I think I passed the point of no return for building a locomotive when I turned 50. However, I still have hopes of building a small, low pressure boiler one day. Since I'm now 66, I guess I better get started soon!

This will be very interesting. It looks like the boiler tube is about 3" which is a nice size boiler.

Looking forward to this; as doing one of these has crossed my mind since I did my 3" vertical and got into bashing the cr*p out of copper sheets.

The plates look all clean and tidy. Is it a kit? or are you mighty well organised?

Have a you a copy of Martin Evans Model Locomotive Boilers book? A good read and full of usefull info.

Pete:- Yes the parts came as a kit with the end plates pre- flanged but to be honest the flanging is a bit rough full of hammer marks and not to tidy corners I'm going to make some flanging plates and tidy them up myself.

I have a copy of Martin Evans book and very interesting it is too, its only fault is that its not up to date with current practices, as you read up on boilers you find inconsistencies between authors that seem to get greater with time, it can get very confusing. The best current boiler information I found was an article in Model Engineer 9th May 2008 by Julia Old it describes how she used modern methods, with expert guidance to make her first boiler, its a very well written article, and she wasn't too embarised to explain her mistakes and how they were corrected, its a must read for anyone building their first boiler.

OK Made a start not to exciting but every journey begins and ends with a step.

You may think I'm sad but I like to plan out jobs as best I can before I start, I use to make my living designing building and testing items that could be a bit hazardous, if you didn't get your preparation right:- I just can't get out of the habit.

So after much reading and talking to people and listening to advice, I made out a list of items I thought I may need I may end up not using everything but its better to be prepared than wanting. I started my To Do List I'll add to this as thing progress, and as putting a boiler together is complicated and the order of assembly is important:- I listed the order I would assemble the boiler, I may combine some of the operations or even change things round a bit as they go but the shear act of making the list helps make things clearer in your mind:- its all part of the learning curve.

The first job I thought I would tackle was to make some clamps I want to leave them outside to go rusty so that the solder wont stick to them to easy so the sooner I get them made the better.

A rummage through the scrap box turned these bits of material up.

I burn the paint off the long bars and just squared the ends and sides up in the mill and drilled and tapped them as for toolmakers clamps, they will get a bit of heat so nothing too posh, as long as they will do the job.

The shorter bars again were squared up and a slot milled across and the end drilled and tapped M5, I rounded the jaws off in two of these so that I could grip the rim of the tube without the sharp edges damaging the soft copper.

I was going to make a pair of tongs but them I remembered these.

I bought them at a car boot sale many years ago, don't know why I just thought they would be handy one day, well their day has arrived ;D

Stew,
Looking forward to the build. Glad to meet a fellow list maker! I've noticed the older I get, the more valuable the lists are.
Dennis

Thanks Denis I make lists of lists

Thing have been a little slow, bin on Gardening Duties and looking after our grand son.

Any way made some progress with a backward step thrown in, more about this later.

Made the former for the backhead plate you this former for the throat plate as well. First square it up so that you've got four good edges on each face, then blue it up and mark it out on the mill.

Then centre pop the line to give you something to work too.

Then mill out the shape I used the rotory table this time, it just fitted the clamping is not too elligant, but hay:- its effective.

Then it was just a matter of tidying up the plates on the former her they are all done with the formers.

OK it's a scrapper:- so decided to drill the rest of the holes any way to perfect the best method.

Over too the mill:- this is the set up, the plate was position over a slot for the drill to run into and clamping onto a chunk of wood in the middle, so the flange wouldn't be damaged.

That worked like a dream why didn't I do that to begin with :wall:

This is the scrap plate, the 3/4" hole on the left is the one that run out. you can work out for your selves which 3/8" hole went wrong.

Guess what I'll be buying at the Harrogate show, still I've got the formers know.

Who knows that "drilling soft copper can be tricky" :wall:

Stew,
Eliminate the heartbreak and frustration of drilling copper with . . . the UNIBIT!! It did for me. I will now never drill larger holes, say 1/4" or larger, in copper with anything else. They work well in all common sheet metals.

PS - I use them at a rather low RPM (slowest drill press speed) with a drip of tapping fluid otherwise they can sqeal a bit in making the larger holes. ALSO (FYGI) . . . I like to put a slight chamfer on my holes in boiler copper for relief, to give the solder a place to run/puddle, such as in flue holes. When a step drill transitions toward its next larger step, before beginning to cut that next larger size, it will cut a very small chamfer, which I usually let it do and leave in place. Convenient how that works out. 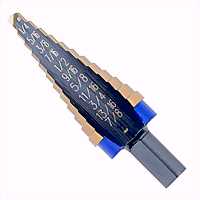 Thanks for the tip with the step drill I do have one but its metric I'll pic an imperial one up ay Harrogate.

I agree entirely with Harry's approach to using a step-drill for making large(ish) holes in copper boiler plates... works a treat, well worth the investment. I use to cut the holes for bushes in the boiler barrel also.