Firstly hope you all had a great Christmas and wish you all well for 2020.

I've been absent for a while and a lot has changed at home, a house move, new job, (again), hopefully a little more settled now. Anyhow onto the post.

I was lucky enough to aquire a 2" Durham and north yorkshire traction engine for a very modest sum, it is far from been built to an excellent standard. When I first got it I looked over it and then started to take measurements and look over the parts I have.

Lists of issues that have been found are as follows
• wheels not running true to axle bores
• timing belts stuck on wheels with evostick adhesive
• front axle was not correctly centred before machining, meaning axle ends have large flat spots on them.
• Front perch fork seems stiff in the perch bracket so may need lapping or remachining
• smokebox has been silver soldered internally to seal the smokebox
• chimney base on smokebox not centred, it was machined incorrectly then bodged
• smokebox doesn't fit on the boiler, as the front tube plate has bulged the outer shell where it has been tapped in before silver soldering.
• The hornplates don't measure parralel, on investigation this is because the sides of the outer Firebox aren't parralel, and slightly taper to the top.
• the castings for the axles and crankshaft need their bearings remachining as it was bored oversize to accommodate the above
• the rear wheels same as the fronts with timing belts stuck on and rims not running true to the bores.

Having had the ME write up for sometime I have all the plans available and spured on the purchase of this miniature traction engine.

Having got moved into a new house I have an average sized garage which compared to the 6x4' rickety wooden shed is luxury. I will be setting the workshop up before continuing much further with this thread, however arrangements have already been made to have the boiler initially hydraulic tested to working pressure. This will ensure there are no leaks in tubes or the main soldered joints. Without over stressing the copper boiler, until it's time to conduct a full x2 Working pressure test after the modifications described below are completed.

If all goes well with this then I will proceed to try and rectify first the issues that lead from the boiler, the bulge in the tube plate, and skimming the mounting bushes on the sides of the boiler to half overall dimensions from the centre line of the boiler. This will mean the hornplates will be able to sit vertically instead of tapered. Then I can move onto sorting the other bits out.

After a conversation with another chap who has built a Durham, he said he had a spare unmachined cylinder casting. And the bonus bit he said I could have it if I could pick it up. Sadly we are at opposite ends of the country (uk) so it means I'll have to arrange a courier to collect it. But far cheaper than paying for the fuel or even paying for a new one at over £100. So my head has been thinking of how to machine it on the myford ML4 and I think I have an idea which will involve a fixture plate attached to the vertical slide (bought some more tooling too), and the casting bolted to this through tapped holes in the top of the cylinder for the regulator chest. I can then machine the rear face of the cylinder, the bore and the mounting all in one setting, turn the vertical slide around and machine the front cylinder face. Then mounting on an expanding mandrel on the vertical slide I will be able to machine the valve face and make any corrections to the valve ports if required.
Doing it this way will ensure that four of the five major machined surfaces will all be parralel to each other. Or at true 90° (for the cylinder ends).

Anyhow still paint to strip and a workshop to set up so will be back again soon with an update on how the hydraulic test goes..... 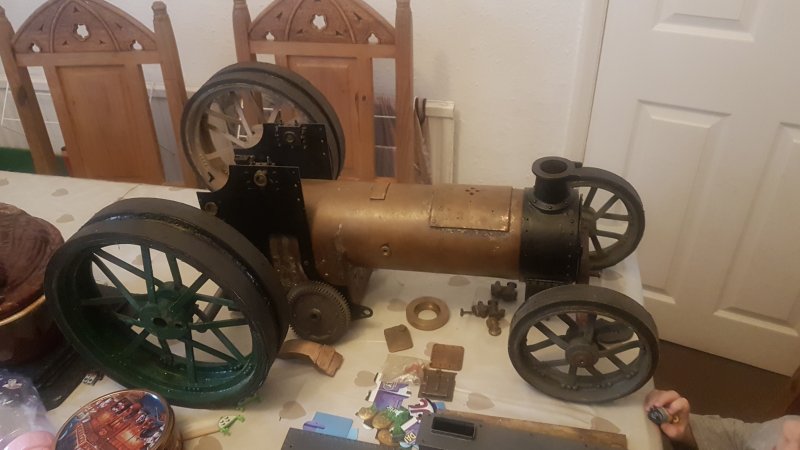 A good look at the horn plates and the castings for the crankshaft, has revealed what I already suspected, that I will have to make new ones the machining is pretty poor quality to none existent. After feeling quiet dismayed by it all I thought I would see if I was flogging a dead horse, and plugged the boiler up to see if it would actually hold water, and didn't have any prevalent leaks. thankfully I can say that the boiler held up and even after been left overnight with hot water in it there was no signs of water under the engine in the morning, so signs are promising for a hydraulic test.

The next question I have for you all, given the castings are so badly machined and I will be making new horn plates anyway, (they aren't parallel in any axis), would it be easier to fabricate the second shaft and rear axle/suspension bearing or machine a casting. I have yet to work out how to machine inside the rear axle bearing holder, other than with a really small long series end mill. So for me building up would seem easier on this part. unless any of you have any ideas on how to machine inside it? woodruff cutter would be too larger a diameter to get fully to the top of the slot.
Last edited: Feb 11, 2020
G

Hi Jon
For my thoughts, I would do a proper hydraulic test- with water at at least double the intended working pressure and then do an equivalent steam test.

After all, the boiler is effectively the chassis on which the rest of the bits are 'hung'- or not, as the case may be.

Christmas ? Just a frightening situation where my bank balance changed from a healthy colour of black to a horrid shade of red. Then came Hogmanay and somewhere in between was a couple of family visits to Leeds with train delays, cancellations and all things ugly. It's rough for a guy who is half blind, deaf, with COPD and a wheelchair user.
It turned rougher with the news that an old Spitfire engine fitter who had been a mate of mine for over 70 years seemed to be heading into dementia and then I was really knocked sideways with the news that he was dead.
So I'm the last of my old RAF 31 Squadron lads.
My Unimat has gone along with the Myford ML10 and being in the 'black' again am simply waiting for the weather to improve and get my almost new all singing, all dancing Myford Super7B with power feed, industrial stand and suds pump and possibly an inverter. Price? Don't ask but I been out to buy a bottle of red ink again!

goldstar31 said:
Hi Jon
For my thoughts, I would do a proper hydraulic test- with water at at least double the intended working pressure and then do an equivalent steam test.

After all, the boiler is effectively the chassis on which the rest of the bits are 'hung'- or not, as the case may be.
Click to expand...

Christmas, well the original post was posted on the 9th January.
Sorry to hear of your friends passing, my condolences.

With regards to the boiler the "Wet test", was just to see if it was even worth getting the boiler blanked off for a hydraulic test, and didn't leak like the proverbial sieve. The test will be x2 WP when I have the blanking plugs made. Steam test will come when I have the cylinder and motion to the crank made.

The boiler is the main concern at the moment but after seeing the state of other bits that I have with the engine, I was looking to see how much needs doing elsewhere before I can pick up where the original builder had got to. Thus far I haven't found a single piece of it that doesn't need work. Still that's what you get for picking up a "bargain". I have also obtained the tender now for the engine, that was hiding away at the back of the garage, which is surprising good, compared with the rest of the engine. So once i've got the boiler to dimension and new horn plates made, the engine should rather rapidly start to look in a half done state. At least the datums will be correct to work from, and everything looking square. Will make the job much easier.
You must log in or register to reply here.
Share:
Facebook Twitter Reddit Pinterest Tumblr WhatsApp Email Link