The two conrods on a common crankpin seems to work OK for Harley Davidson so I'm sure Brian's will too. It's not a lot different in general layout to the Hoglet model engine and they run OK too.

I'm about to try and start the engine, but I have discovered that the coil hanging on the wall really was bad.----Poop!!! Should have threw it away 10 years ago. I just called PartSource and a new 12 volt coil is $60. I'm trying to reach Canadian Tire to see if they have any cheaper coils. While I wait for Canadian Tire to call me back about a coil, I'm sorting out my shop and putting away tools and cleaning machines.

not sure if you have a tractor supply in Canada or not (or even near by) but they used to have very cheap 12 and 6 volt coils for old tractors. i picked up my coil for my old farmall there years ago seems like about 25.00. but who knows if inflation and such what they sell for there now days.

edit - they were generic brand for points ignition.

A second-hand motorcycle coil should be considered.
Gordon, is the snowmobile engine a 90 degree Vee?
I have an idea that a coil that fires through 2 leads simultaneously (redundant spark) should work, but I haven't yet sat at the board and drawn the cycles to see where the redundant sparks fire.
Is that what the snowmobile coil does?
K2

Steamchick said:
A second-hand motorcycle coil should be considered.
Gordon, is the snowmobile engine a 90 degree Vee?
I have an idea that a coil that fires through 2 leads simultaneously (redundant spark) should work, but I haven't yet sat at the board and drawn the cycles to see where the redundant sparks fire.
Is that what the snowmobile coil does?
K2
Click to expand...

I don't know. Brian has the snowmobile coil that he used on another twin. Apparently the two cylinders are 40° out of sync so I am not sure how that would work out. I think that it would fire at TDC (0°) then 40° and then again at TDC

Exciting time at the Rupnow house!!! I bought a new coil, wired everything up, and the engine is firing dependably on one cylinder. The second cylinder is firing sometimes. Engine hasn't decided to take off and run on it's own yet, but damn, it's close. I've developed a massive oil leak, and initial impression is that it's coming from that access door I cut into the bottom of the crankcase to get at the rod bolts. I will dump the fuel back into it's regular container, turn the engine upside down, and have a look at the oil leak---Got to fix that, because once the engine runs on it's own I don't want to shut it off for half an hour.

Hi Gordon, I don't think it is 40 degrees, but a whole revolution and 40 degrees. Which would be an inlet stroke at a pressure too low to ignite.
That's basically how my Moto Guzzi runs... no problem.
K2

Well shoot Brian I was really hoping today would be the day. Sounds promising!

Today the first change has been made. My beautiful exhaust pipe assemblies were just the right length to dribble oil out directly onto one set of ignition points. This was not good, so I have added 1 1/4" extensions to my exhaust tubes. I have changed the solid model, and drawing to show the pipes at the correct length. 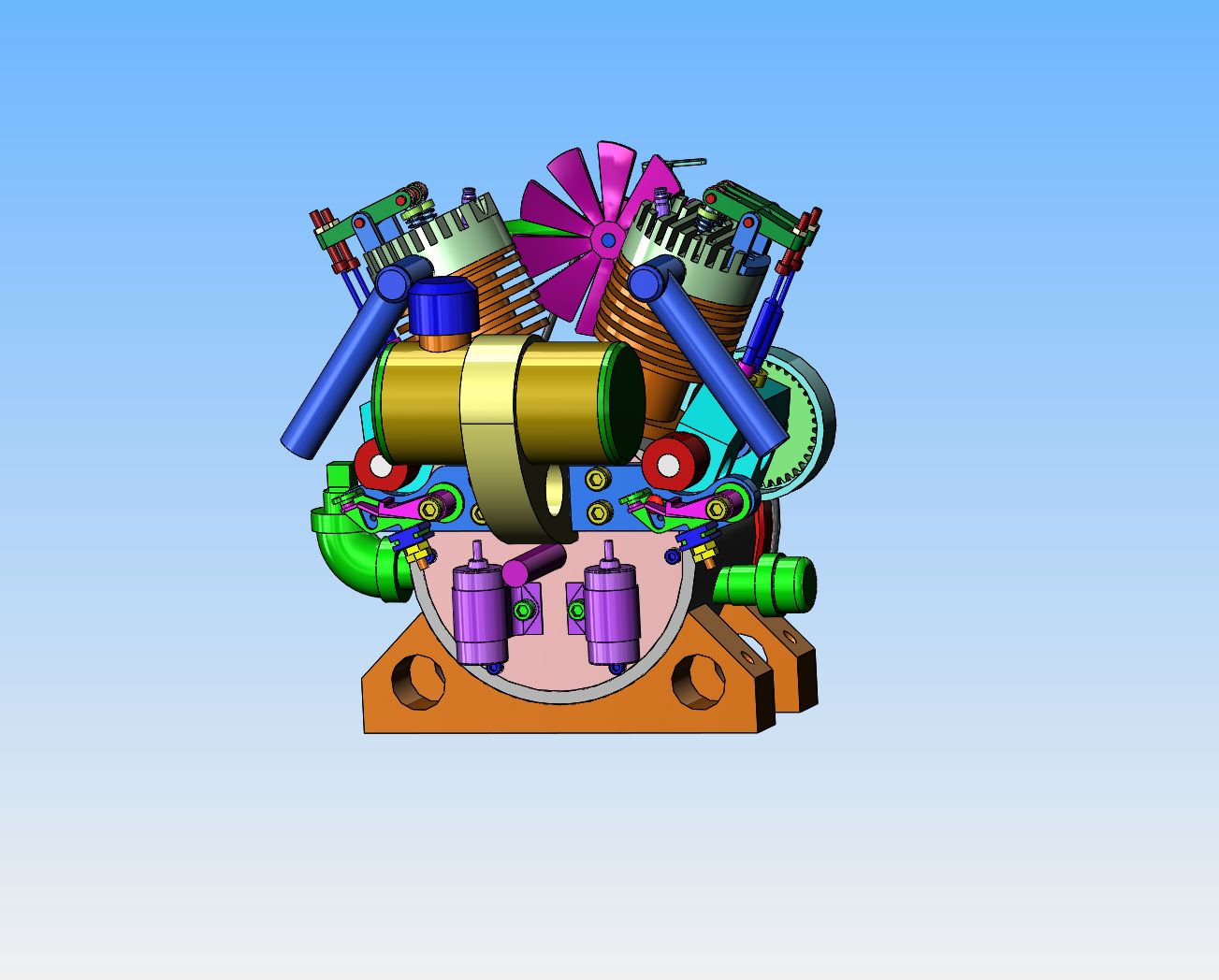 30 Pounds are 45 Canadian dollars. It isn't cheap being a Canadian. My coil was $60 plus tax, ended up being $67.30. I might have found a cheaper source at a farm and tractor supply company.

I have been using the COP (coil over plug) coils as used on Ford and a few other cars. You can buy a set of 8 from eBay for $25/$30. Another option is to get them from the junk yard. They are small and seem to work just fine.

Both sites also list them for 8 to 10 times that for one but there are several other options for Mini Cooper BMW Peugeot.

These may not be the greatest quality but for this purpose they should be adequate.

Gordon--thank you for that info. if I need any more coils I may use that approach. Today the engine ran. Both cylinders fired quite well. Had a two minute sustained run. I have way, way, way more oil than the engine can cope with.--Engine could be used as a mosquito fogger. Blue smoke like you wouldn't believe coming from both exhaust pipes as it ran. Okay--I'm pleased as punch!!! At the end of the two minute run, both sparkplugs were overwhelmed by oil and the engine slowed down and quit. Now I have to make a decision about my oil in the engine. One of the possible solutions is to cut access holes in the engine endplate where the ignition points are located. I could reach in with my trusty oil squirt can and lube the big ends of the connecting rods.----forget about having an oil sump. The only problem with that is how to get oil to the small end of the con rods, up inside the piston. Anyways, I'm happy happy happy. Videos will follow once I get the oil situation figured out.

Brian,
Do you have a crankcase vent? You never mentioned it in the build. It could be causing the oil problems as the crankcase has to vent somewhere.
Cheers
Andrew

No Andrew, I don't have a crankcase vent. I will think on that.-I'd like to keep the oil base.---Brian

You might just be over full and slinging way more oil up than the rings an o ring can scrape off. Try lowering the oil level a bit and see what happens.

Brian,
That would do it, as the pressure in the crankcase builds up, it pushes the oil out every where, in cars it is usually any gasket, rocker cover usually. Shown in the pics is a Saito FG-17 running on 20-1 petrol/oil mix, as can be seen is the amount of oil being pushed out the crankcase vent.
Cheers
Andrew

I checked on my CAD software, and I can lower the oil level 0.2" and still touch it with the rotating conrod. I will do that tomorrow and then have a test run. If it still oil fouls the sparkplugs I will open up the engine endplate for oil squirt oiling.
You must log in or register to reply here.