You right, I missed the fact that the Supertigre 5CC was most probably a 2 strokes.

After a month or so working on my hibernating Honda CX 500 , I turned to the leak problem of the pistons. Compression cold is not bad, starting with an electric starter is a piece of cake, and still there is the problem of dying out at full RPM, combined with excessive blowby from the crankcase vent. The obvious choice is to fit two piston rings, like the original.
There was no room on the existing pistons to cut an additional ring groove so I decided to make new ones. 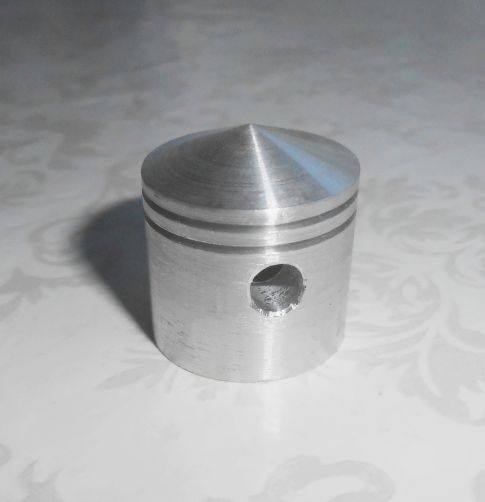 This is the prototype version from mystery aluminium, a strange alloy that could only machined with oil based lubricant
such as WD-40.

My guess is a cast alloy.
Cast alloy tend to make chips rather than strings and do not achieve the mirror finish achievable with the extruded types.

Yeah, that is what one would think but.. it is extruded bar stock. I do not know where it came from but it is very brittle.
At the start of the Edwards project I tested some alloys with a home made tensile test device. Is is just a lever with a sliding weight using test bars with a minimum diameter of 2 mm . 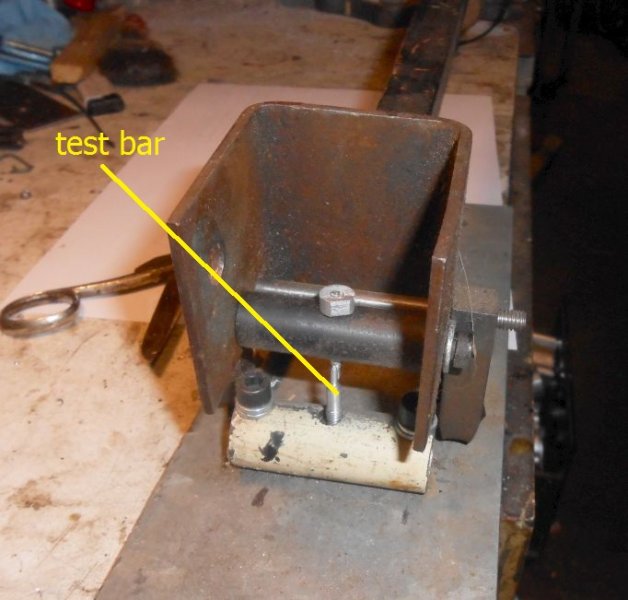 This was not exactly testing methodb according ASTM (or any standard whatsoever) but it gave me an idea which material was rubbish and which was not. 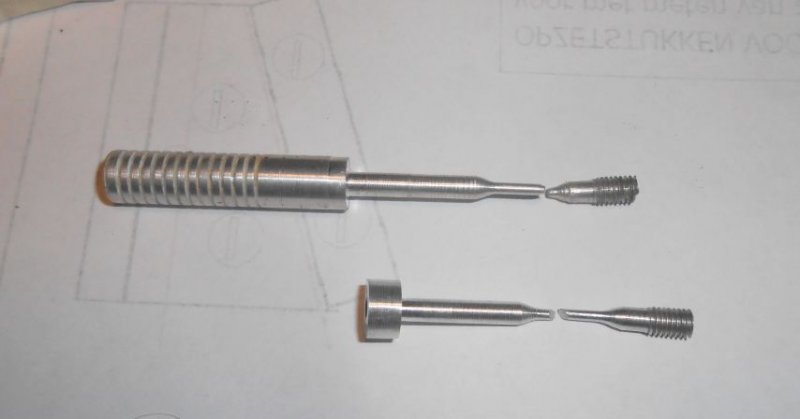 When I tried to make a test bar of the mentioned alloy it broke before I finished it so is it really brittle.

Now I remember from the past that the German piston manufacturer Mahle once produced an alloy with a very high silicon percentage for people who wanted to make their own pistons so that would be a possibility but then again, I haven't a clue where the stuff came from.

Anyway, I went on harvesting material form my old diesel piston which is now depleted as far as 20 mm material is concerned. 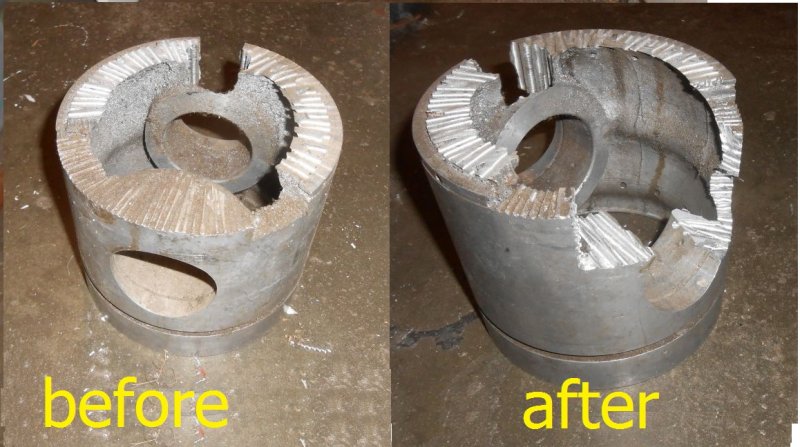 It gave me sufficient blanks to make a new series of pistons for the Edwards. 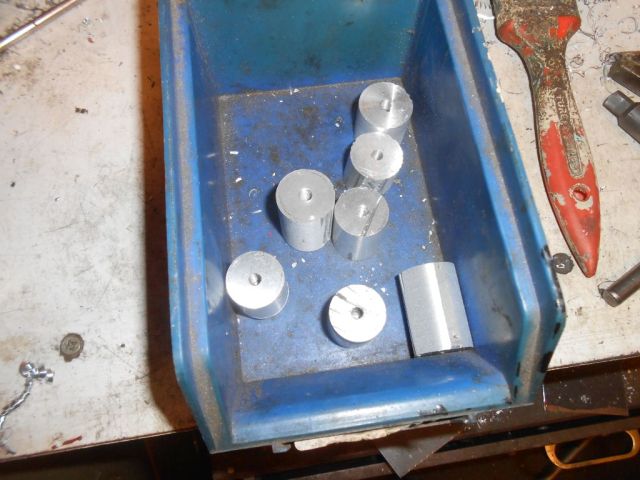 When I made the prototype piston I discovered that I could not measure the depth of the piston ring grooves. I made the grooves slightly smaller so I could possibly use left over rings that were rejected because of their thickness.
So I made a pair of attachments to fit over the jaws of my digital caliper, saving me the money for an expensive groove measuring tool that I would hardly use. 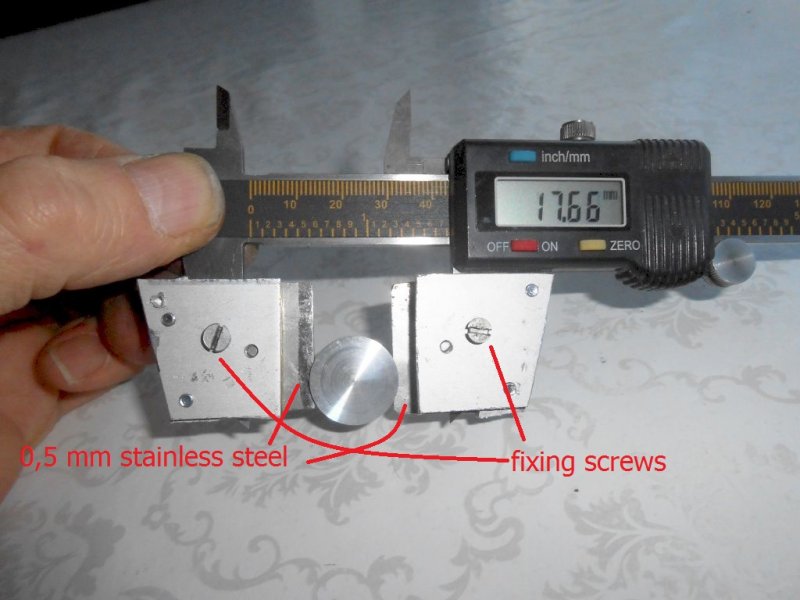 Very clever accessories.
I use the same technique of "gnawing" with holes when sawing is not possible.

On the subject of piston rings: I wonder whether old brake cylinders could be used to make them. 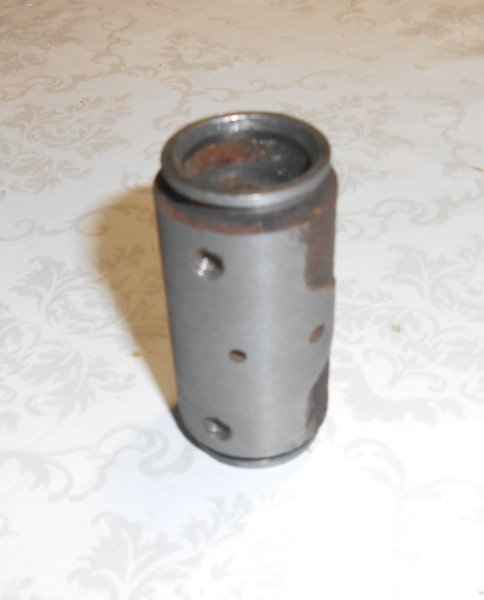 The material is cast iron and is easy to machine. Old brake cylinders can be obtained at any scrapyard for next to nothing ( or nothing at all if you fix your car yourself). The only question is if the material quality is any good. Being a safety item, it should be made of good material ... shouldn't it?

No problem, the cast iron in the brake cylinder is good quality. I has used brake disc who are made of cast iron to produce piston rings. My model engines has still good compresion after a lot of years. And the cam shaft of cast iron too except the cam is too hard to machine.
A

I used brake cylinders to make piston rings. As they were the only rings i have ever made i can't say it is a good idea or not. My engine is a runner so they do work.

After measuring the wall thickness of the piston crowns I found out that they were... well, a bit thin, the thinnest measuring 1,7 mm. Whoops.... Now I can fit them in the engine and see what happens but I'd feel more comfortable if I would know that these pistons could withstand the pressure. Now a long time ago I made a hand operated hydraulic pressure pump, just for the fun of it. It came in handy afterwards. I helped a friend of mine who had the piston of the brake caliper of his old BMW motorbike seized up. With the pump connected, the piston came out quickly. To test the strength of the piston, I made a thick-walled cylinder4 housing with a connection for a hydraulic pipe. The testing object was a previously rejected piston that was adapted to fit an O-ring instead of the usual piston ring . 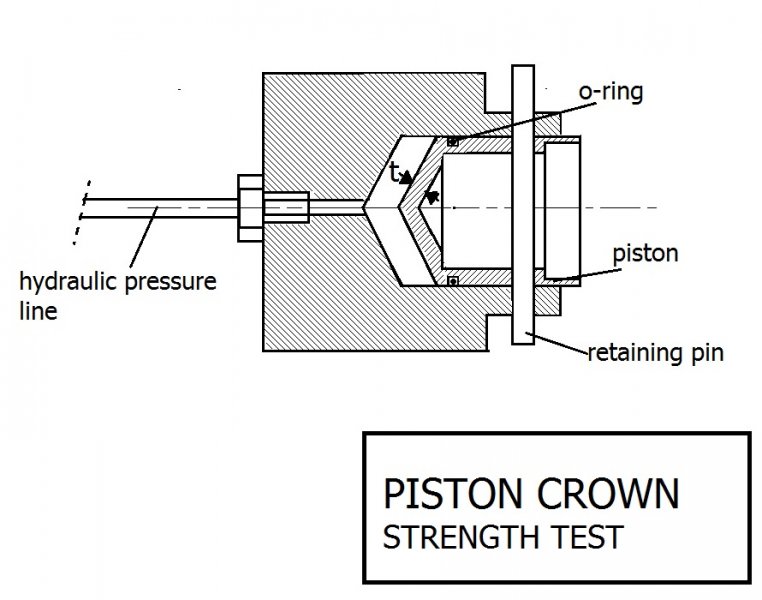 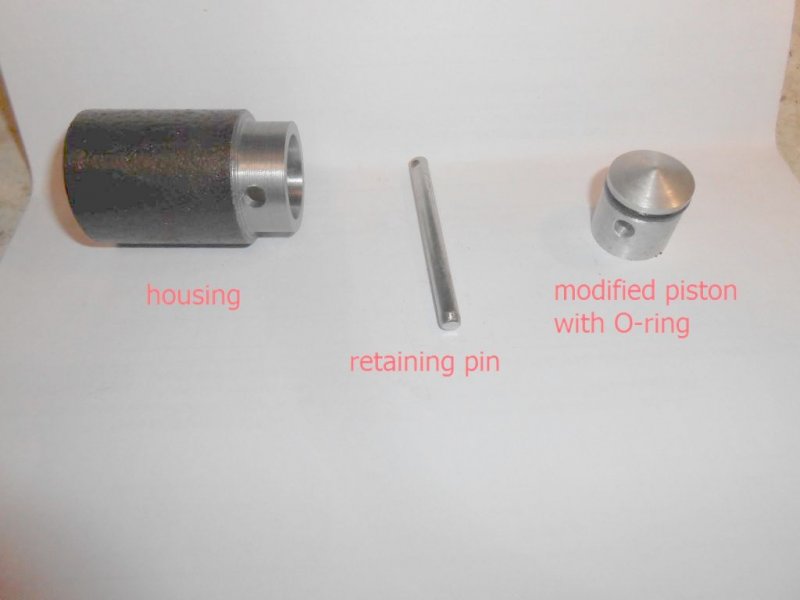 I managed to get the pressure to 100 bar, and nothing happened. 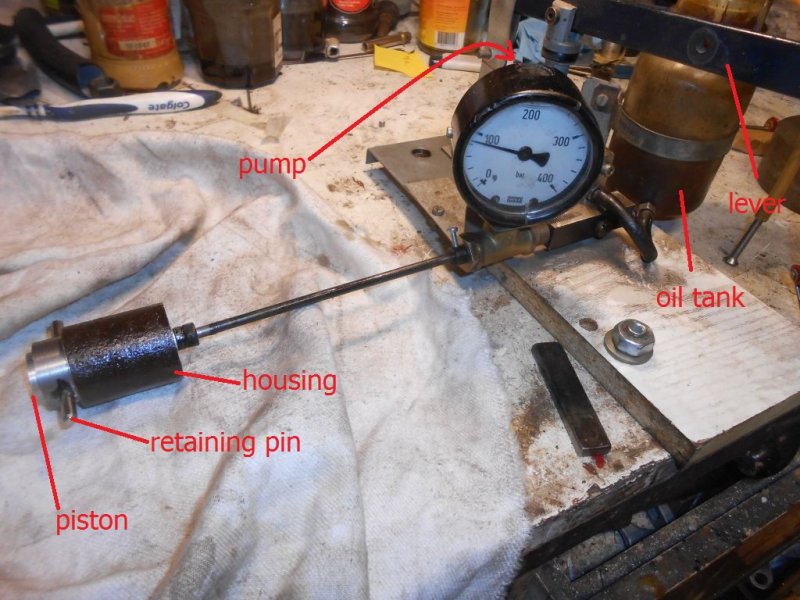 From various sources I found out that combustion pressures in four-stroke petrol engines are about 30-40 bar. Even if the pressure in glow engines would be higher and taking in account a reduced strength of the piston material due to high temperatures, I think I 'm am quite safe.

I hadn't realized peak pressures get that high. I've seen a few generic pressure profiles like this sample plot but had not payed enough attention to the Y-axis. Amazing. The duration at that pressure spike must be very short, but it repeats often & I guess stress is stress when it comes to materials.
https://performancetrends.com/Definitions/Cylinder-Pressure.htm

With the pistons complete I went on to the piston rings. Having made the ring grooves a bit narrower I could use previously rejected rings that were too thin. This meant that the thickness had to be reduced form 1,00 mm to 0,80 mm. Doing this manually would probably result in a lame hand so I made a lapping machine using old parts form various sources. 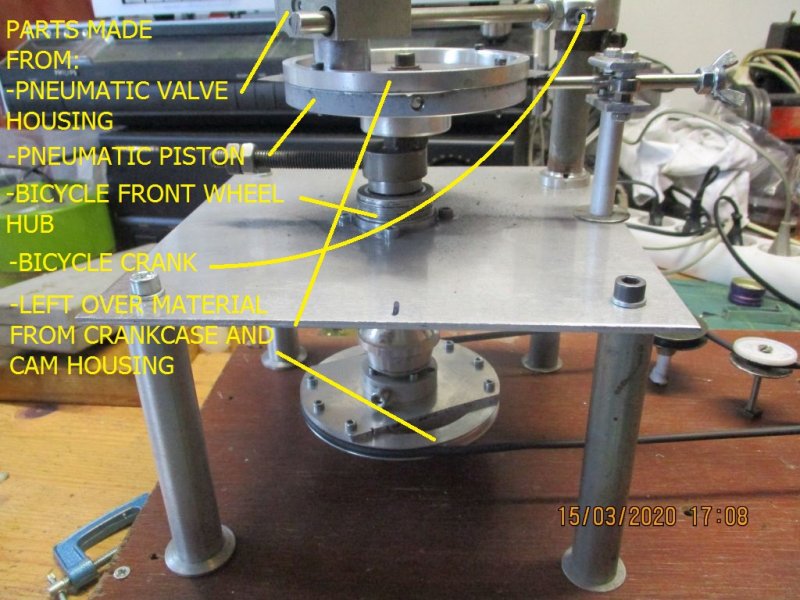 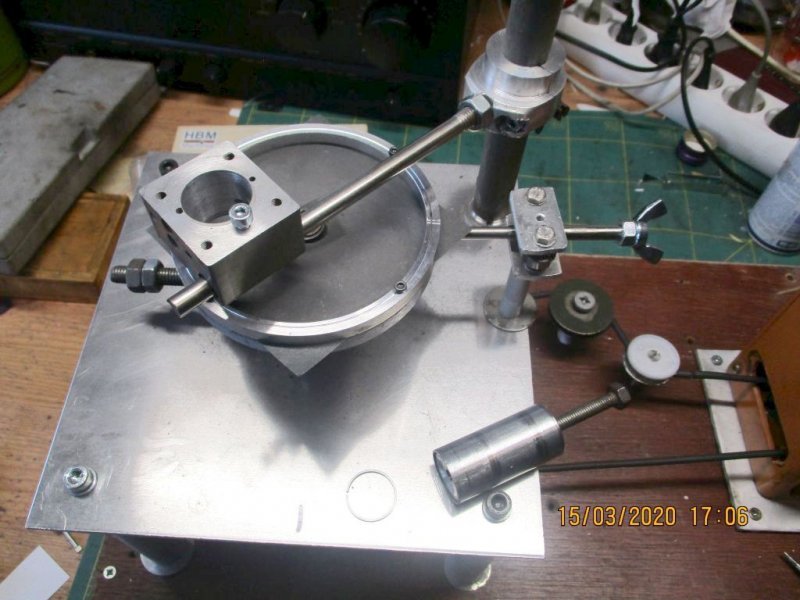 The ring is kept in place by a plunger-type tool, adjustable to match the thickness of the ring. 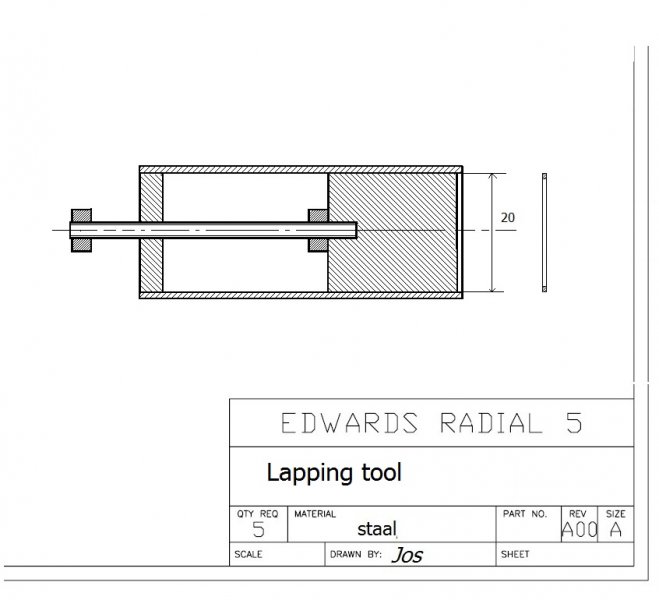 There is a ring on the lapping disc to hold the sandpaper in place. I started with grain 100, final lapping was done with 400. 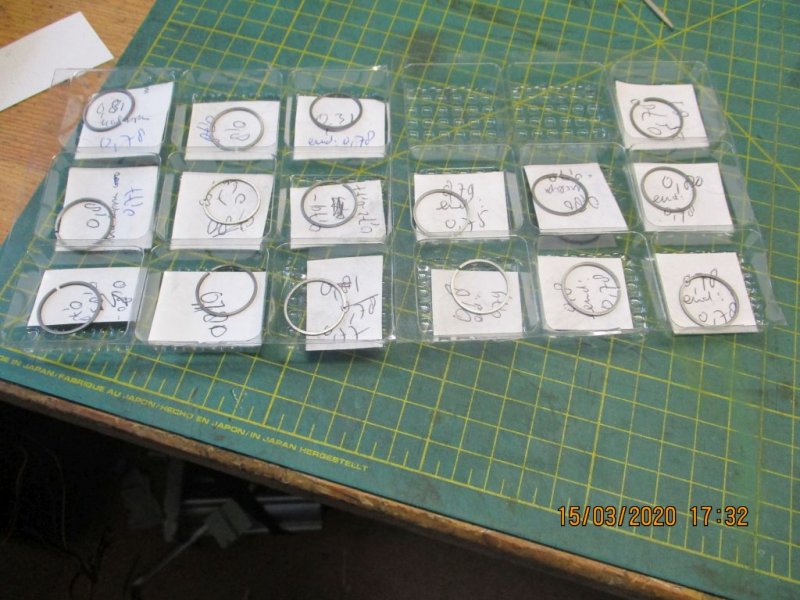 Very cool! Any chance of a video of it in action?

This is how it works.
It sounds a bit wacky but it does the job..

Ingenious! So the sandpaper is held by both the central nut/washer and by the outer ring, right? Any tendency for the sandpaper to pull up, wrinkle, or rip?

I've long contemplated some sort of sharpening contraption using wet/dry sandpaper - that's what I use to get my chisels and planes super sharp, but currently I have to do all the motion, with the consequent danger of rounding over. Something like what you have rigged up, without the oscillating motion, and a tool rest ... hmm ...

Hi Awake, the sandpaper is held in place by the ring only, the bolt in the middle is for keeping the hollow shaft for the disc in place.

awake said:
Ingenious! So the sandpaper is held by both the central nut/washer and by the outer ring, right? Any tendency for the sandpaper to pull up, wrinkle, or rip?

I've long contemplated some sort of sharpening contraption using wet/dry sandpaper - that's what I use to get my chisels and planes super sharp, but currently I have to do all the motion, with the consequent danger of rounding over. Something like what you have rigged up, without the oscillating motion, and a tool rest ... hmm ...
Click to expand...

I have one question...What glow plugs do you use?
I am building my own Edwards radial 5 but it seems difficult to find the ones that the plans specify (Fox Long with idle bar) they seem to be really old stuff...

I have one question...What glow plugs do you use?
I am building my own Edwards radial 5 but it seems difficult to find the ones that the plans specify (Fox Long with idle bar) they seem to be really old stuff...