MuellerNick said:
All parts do have some character.
Click to expand...

I fully agree your point of view Nick. It's very complicated to build a scale model as close possible to the reality.
Thats also one of reason why, I prefer Cast Iron insted of Aluminium castings. It's a world of difference. The material choice and the material mix also very important. To much brass or an engine in full brass is not definitively not beautifull. Also the choice of screws & bold
Here one of my produced engine, if you look good, there a lot of fault
Question Nick, are you going to Karlsruhe in Jan 2013 ??
LeZap 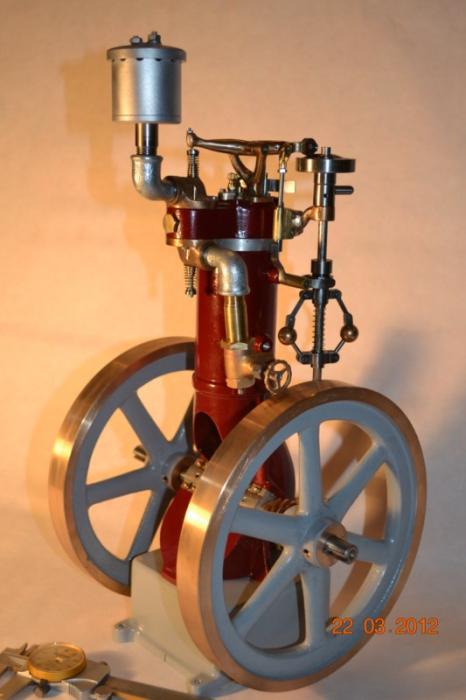 I will try.
I have no reservation, but maybe pictures of all the castings mocked together convince them to make an exception. There are always people that do not show up, so I hope to catch their place (keeping fingers crossed).
I was at Sinsheim several times, and my Ellwe was admired quite a bit.

Desaster-week!
I made 5 core boxes, three of them were wrong.

2 core boxes for the platform's support arms. I confused positive and negative. A long story to explain how easy that can be done. And so (there are three separation planes) core sand molds didn't fit together. I realized that yesterday when I made the core sand moulds. Changed the core boxes and milled them again 'til 2 o'clock this morning.

Then I made two core boxes for fence posts (around the flywheel and the generator). Having made the cores sand moulds, I realized that one of the posts should be shorter, but it wasn't. Didn't make that core box new yet. Anyhow, casting that posts is a challenge. I do get them cast, but with a rough surface. So I need more tries to show these.

Then I made a core sand mould for the steps up to the platform. That one doesn't cast that well either. I got only one 'til now. Will have to make more attempts. Luckily, when watching the mill, I realized that I made an error in the G-code. Now one of the steps (out of four) comes out of the mould already ruined.

So I do have just one casting to show. It is the platform's arm. There are two different ones (one just shorter), but I only have casted the longer one. The short one should work too (but with my bad luck this week )

Will be cut off at the red line. The lower arm is upside down.

Detail of the arm's end.

Core box and core sand mould. The red exclamation marks are a reminder for me to pay attention at this spot when ramming in the sand.


Hope I do get all that mess fixed until Tuesday
I had completely different plans for this sunday. I wanted to show an overview of all the castings arranged on a wooden base.
Well, things sometimes go wrong. :fan:

MuellerNick said:
..out or at least let make the RTV mould as I do have a spin caster (that is collecting dust)...
Nick
Click to expand...


I for one would be very interested in this aspect (molding, rtv, spincasting etc). should you decide to post similar pictures & explanations in the future.

Your casting stuff is just fascinating. I came to realize I really had no idea how this stuff was produced. The work involved - jigs, technique, materials.. its like alchemy. I dont see myself going down this path for those reasons, but I certainly appreciate the work that goes into 'chunks of metal' castings we sometimes take for granted.

I am very sorry to hear about your casting mishaps you had this week. All I can say is that these things happen (don't ask how I know).

Although I know next to nothing about casting, I still find this thread fascinating. It gives me a glimpse at how it is made and makes me appreciate the extra effort one has to go through to just get a good casting.

Keep up the good work.

MuellerNick said:
Desaster-week!
I made 5 core boxes, three of them were wrong.
Click to expand...

Batting .400 makes you an all-star in baseball.
M

No more pictures about that one, as the core box and core sand mould are very similar to #31.

Casting #33. Long version of fence post.
This was the trickiest casting until now. I thought it will be a piece of cake &#8230;
I had to tweak parameters more than I would like to know. Just one notch up or down with the vacuum, and it fails. Just 10 °C off with the temperature, and it fails. I also had to go up to 750 °C, I normally cast the vacuum assisted parts with 680 °C.

As cast. No, that would not work as a lathe part.

Different stages of failure. I do have more of them!

The core box. No pictures of the mould, I used up all of them.

Casting #34. Step of the platform's ladder.
This one also drove me nuts. But it wasn't as hard to crack than the fence post.
I also do have to cast that one very hot.

From the top. Ingate still in place. There will be a bore instead of it.

With the gate and runner system in casting position.

Different failures. Here too, I do have more than I dare to know.

Core box for the lower layer, will be flipped over.

Core box of the middle layer, with the gates (bores going through).

And core box for the runner system (top layer). All three layers will be stacked and glued together.
Yes, initially I wanted to cast four in a go. But that didn't work that well. So I changed the runner's core box to feed just two cavities.


With the previous two castings, the model gets some visual scale reference.

Next, I'll mill the core box for the short version of the fence post. I think I learned a bit to make that one better. And I think I have found a way to cast the double walled exhaust tube&#8230;

Casting #35. Arm for the camshaft, for the left cylinder with mounting plate for camshaft gear-case. It is similar to castings #3 & #4 on page 3.

As cast in oil bound sand.

Other side with gate sawn off. The area where the gate goes in will be machined.

A bit tricky pattern. It has a shifted separation plane (hand carved) and a loose insert.

Both pattern parts, the right one with the loose insert in place.

The loose insert taken out. When pulling the pattern, I have to press down that insert through one of the two holes. Then there is a thread (backside) to screw a bolt in, pull it inwards and lift it out.

I'll have more today after the pizza.

Forgot these two pictures that belong to the previous casting:

Core box. No cores left, so use your imagination. Works like casting #3 & #4.

That is how the loose insert looks like after the pattern is pulled and it still sitting in the mould. It has to be slid inwards by about 1 mm and then lifted out.


More after the break
M

Casting #36. Lower half of the camshafts gear box.
Cast in sand, with a core and a loose insert.

A look inside where the gears will go to.

Rear side. Arrow points to machining surface. The ingate (largish) is still in place, that's not a defect.

Pattern. The left one has a loose insert.

Here, loose insert removed and flipped over. The thread is for pulling it out of its pocket.

The loose insert still in its place in the mold. It is quite a close call to get it out. I had to add that ear for the thread. Fortunately, there was just enough room for the ear in the pattern itself.

Casting #37. Upper half of the gearbox.

The pattern. Nothing fancy here.

And the core box for both.

And casting #36 & #37 "assembled" after roughly grinding off the gates:

There are 2 mm machining allowance on both mating surfaces, so things look a bit offset.

You sure have mastered the art of casting.
M

And here is a picture of the original:

MuellerNick said:
Casting #36. Lower half of the camshafts gear box.
Cast in sand, with a core and a loose insert.

View attachment 59112
The pattern. Nothing fancy here.
Click to expand...

Edit - This is supposed to be the picture of the camshaft gear box pattern. Somehow I did not get it right.

Nick,
What material did you use for these patterns? Are you milling them directly or creating a mold for them.

Thank you for putting so much work into documenting this. It is truly fascinating. Having done a fair amount of Al casting I am just flabbergasted at the levels you have taken this. I am hunting up a vacuum pump so I can try the vacuum casting.

That is blockmaterial from Renshape. Don't remember the type, but it is for matchboards.
I directly 3d-mill it and then use it. Very good to mill, sand, polish, bore, tap, glue ...

Thanks Nick, I am aware of blockmaterial I have just never used it.

Jim
You must log in or register to reply here.