Yesterday I finished designing a welding fixture for one of my old customers. Earlier this week I redesigned one of the cylinder heads for my opposed twin engine, seeing how I could relocate the sparkplug up near the top of the cylinder head. I don't really want to mess with a finished engine, so I decided to design a new engine to go with my redesigned cylinder head today. Of course this leads me right down the garden path, and seven or eight hours after I think of it, I've designed it. This engine will be air cooled, and will have two valves and a throttled carburetor. I've put a 2" diameter fan on it, and even designed a fancy fan shroud to support and guard the fan blades. I'm not sure when I will get around to building this one, but winters coming and I will need something to do---- 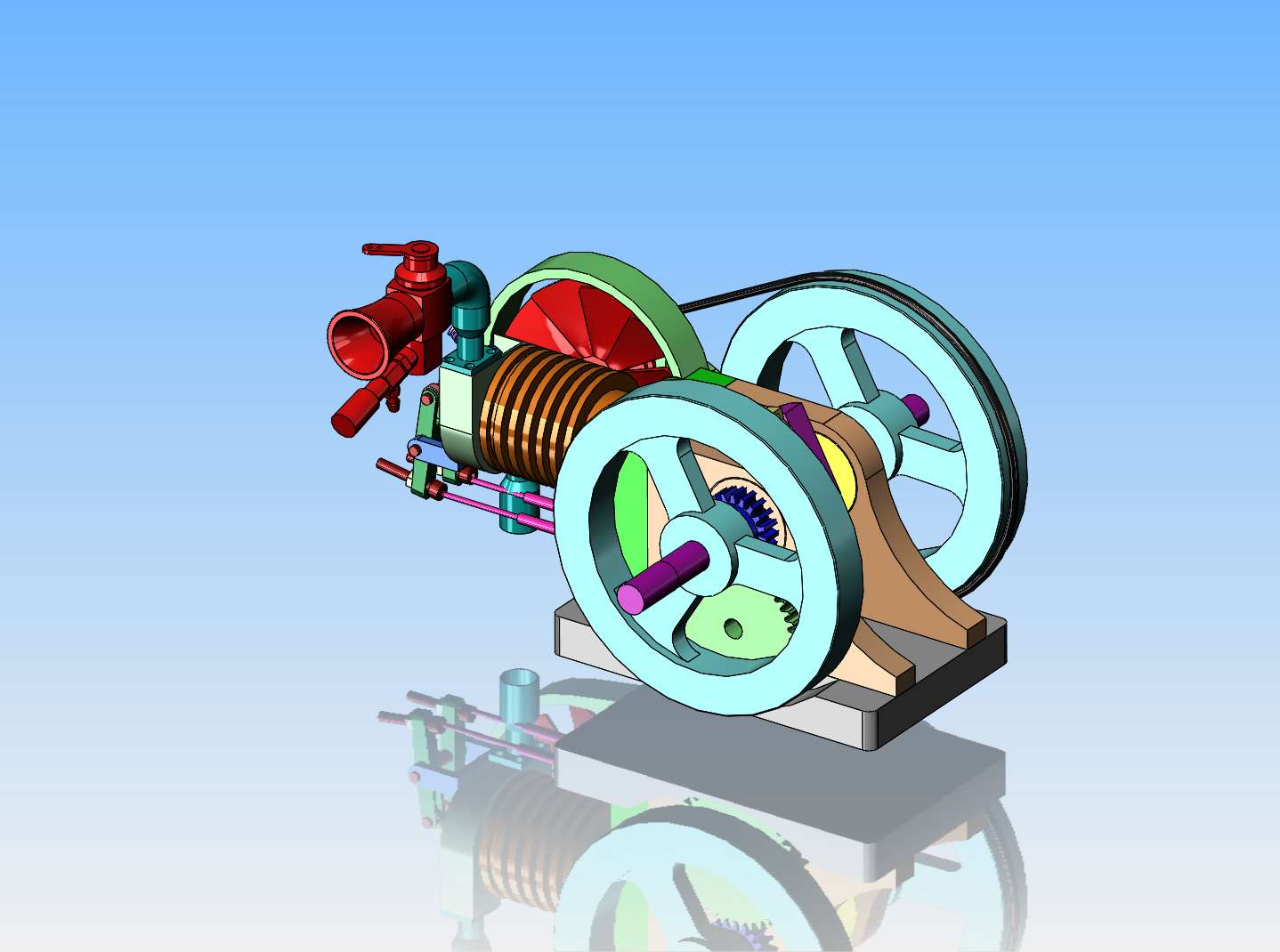 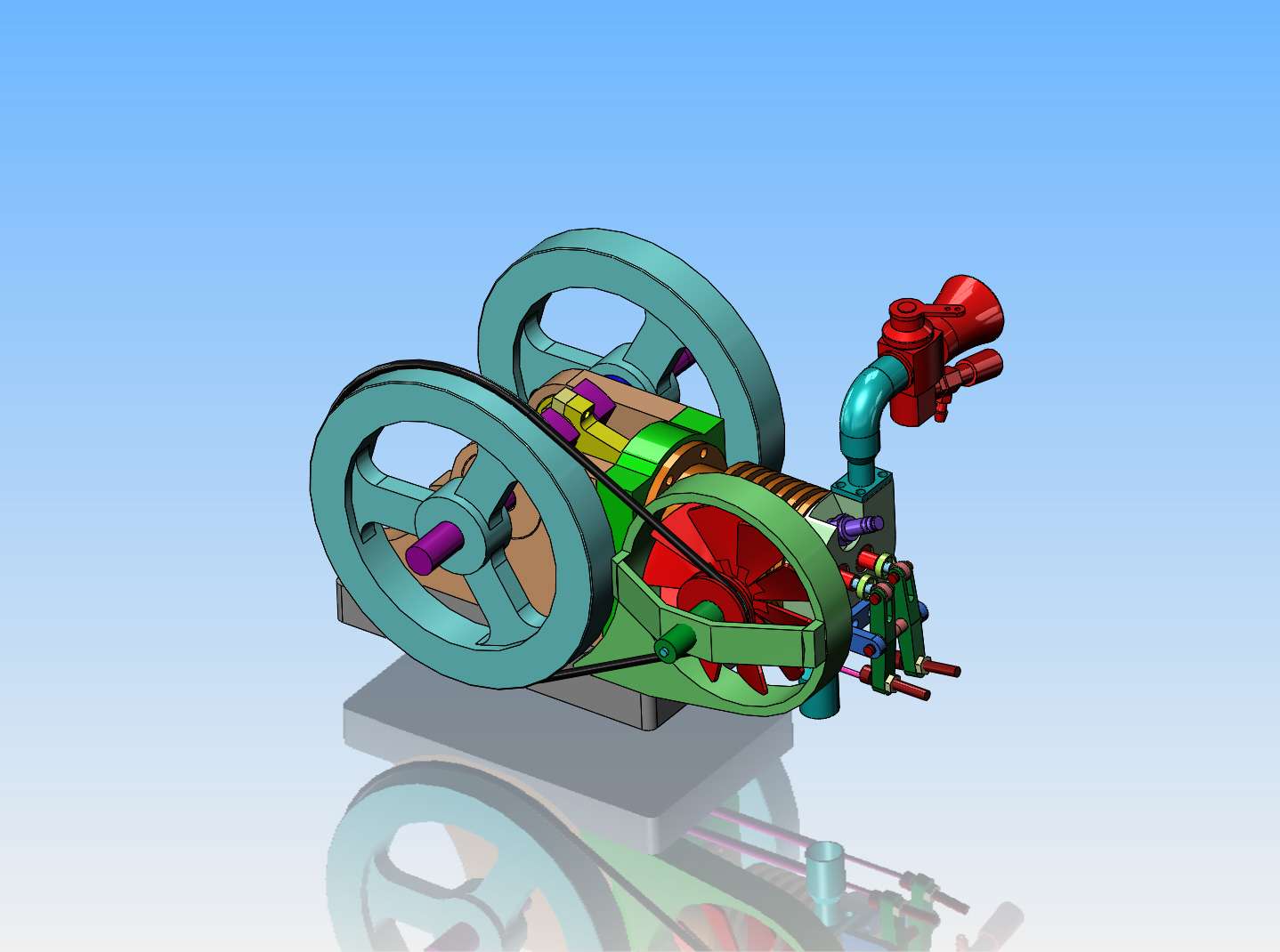 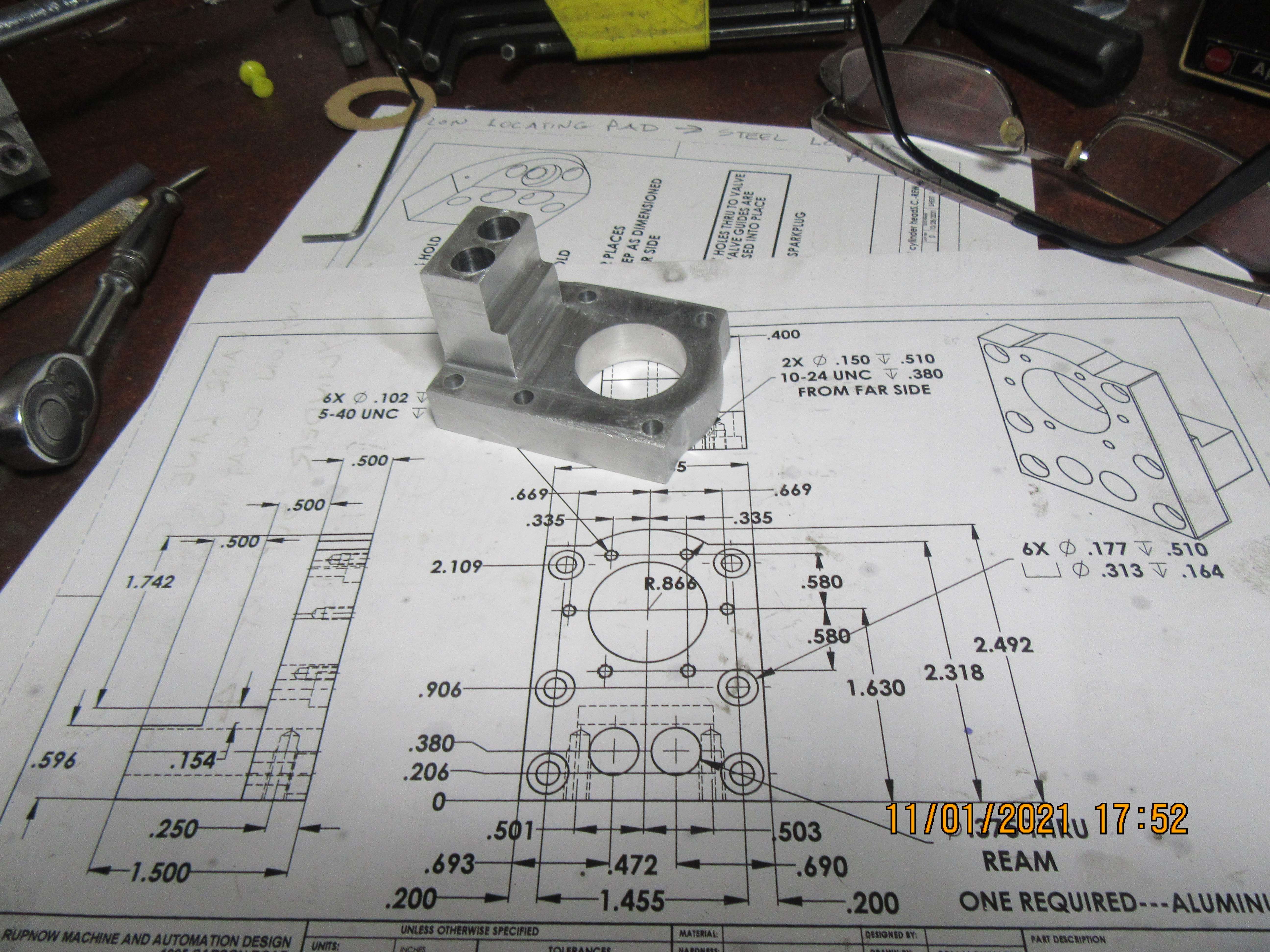 I don't like the carb mount. a plug in the current hole and a new hole through the side might look better. Of course the right angle path would not be good for efficiency.

Coulsea--I'm not a huge fan of the carb mount either, but the trick with engines like this is being able to keep the carburetor above the fuel tank. I did consider putting the carb straight out to the side, but that makes the carburetor so low that it makes an even lower gas tank look goofy.---Brian

Why not a downdraft carb?

Coulsea---When you're right, you're right!!! The more I looked at it the uglier it looked. I haven't built anything on the head yet, so I was able to go in and change it---carb comes straight out the side now. I left that big air horn that was on the front of the carburetor off too.---Thank you. 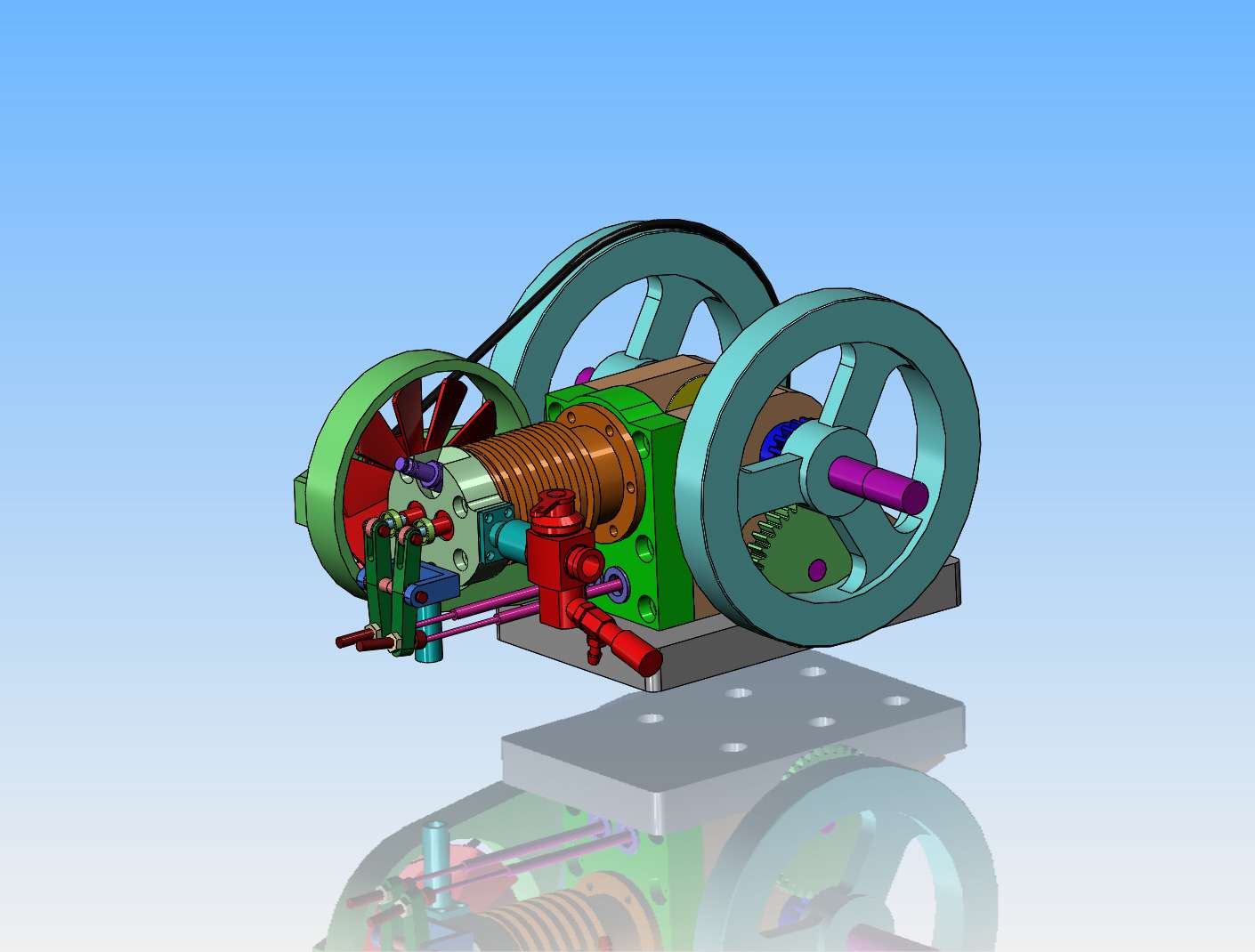 Looks really cool. With the gearing, that fan looks like it's gonna need thrust bearings to keep it from flying off! Should run nice and cool, though I'm wondering if it'll need baffles to direct airflow around? That way the cooling wouldn't have a sharp gradient. It'd look better without for sure though.

Brian, in the first and second pictures in your first post, it looks like one of the push rods intersects with the muffler. Maybe just an effect of the angle / rendering ... ?

It misses. Not by much, but it does miss.
G

Hi Brian. I'm already thinking of making this one... Do let us know when plans are completed.?
K2

Today was spent making sideplates. They are finished except for tapping a bunch of holes. I have used up my entire day machining these parts, and will do the tapping tomorrow. 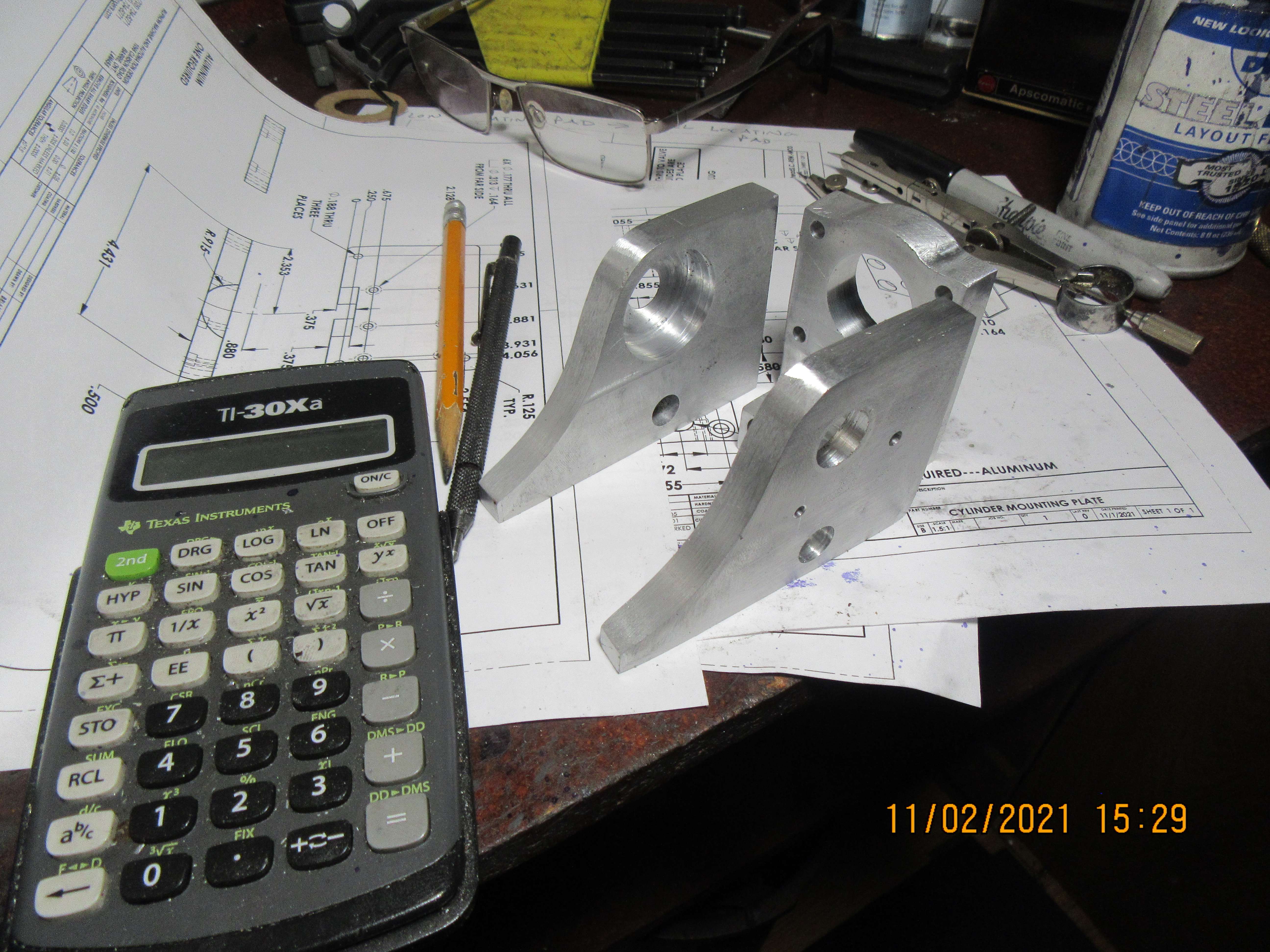 Nice work! You must have a CNC mill.

No, all of my machinery is manual. Pretty well all of the stuff I do is 'One of'.
F

Brian Rupnow said:
Coulsea---When you're right, you're right!!! The more I looked at it the uglier it looked. I haven't built anything on the head yet, so I was able to go in and change it---carb comes straight out the side now. I left that big air horn that was on the front of the carburetor off too.---Thank you.

Hi Brian,
Just a thought from someone very new to this,,,
My first reaction is running the fan off the large part of the flywheel just looks off, to me of course.
What about running it off a slightly smaller step down channel or groove just in the inside of the flywheel,,,
The reasons I’m thinking why,,,,
A small ”groove” on the inside of the flywheel puts the belt off the surface face of the flywheel and gives a better look of symmetry. (I’m a big believer of symmetry when it can be done.) And having it slightly smaller on the inside it won’t reduce your fan speed all that much, and with the groove, would it help keep the belt running true??
You won’t have to worry about belt wonder and adjustment screws like you do with belt grinders and keeping the sanding belts running true.
And the fan looks to be supported only from the one side, and the bracket just looks “off”, to me of course. What if the fan was supported from the bottom with a small pedestal on both sides and a split bearing and top cap. And either leave the fan blades completely exposed, or have the fan included as part of a small flywheel as you typically see on compressors. It has more of the traditional look of stationary engines or steam engines with the flywheel fan design, or a wow factor if you leave the blades exposed. I don’t think OHSA will be after you.
The flywheel fan idea ”may” help with evening out the speed and timing pulses because of the added mass.
Just my less than 2 cents. Love your work.
Cheers,
Ken
Last edited: Nov 3, 2021
F

Sorry another idea,,,,
It appears now that the one side flywheel is offset a “significant“ amount in order to provide alignment for the fan pulley and the flywheel belt.
If you run the fan off a small stepped down groove on either the inside or outside of the flywheel, you should be able to keep the fan and the flywheel in the same plane of movement if that makes sense.
cheers,
Ken

It looks quite symmetrical to me the offset fan drive flywheel is no further away from the frame than the other which has to clear the timing gears and was often even further out on hit and miss engines to allow room for the governor spool. I expect Brian will squeeze his ignition points into that space anyway.

Hi Jason,
I hope my previous comments didn’t sound negative, because they were not meant to be.
I was just tossing out some of thoughts that popped into my head.
Good enough for IHC doesn’t mean we can’t entertain other concepts. I am always looking at drawings, and pictures trying to see what I would do different if I was designing it.
Your picture does however present the idea I was talking about regarding the fan not being caged.
Regards,
KJ

Jason---thank you for the great picture---Brian
You must log in or register to reply here.