It's alright Lloyd. I am not Cornish, I am an import from Hemel Hempstead Hertfordshire. The town with a two way roundabout, and not only two way but each of the exits has a mini roundabout that are also two way. The whole town came to a halt whenever Americans visited. To watch them navigate this roundabout was one of lifes joys! They were rescued, eventually!

OMG, I watched a horror movie about that roundabout. This naive young American couple had rented an American style gas guzzler and got stuck in the roundabout going clockwise and anticlockwise and being blocked from exiting and getting dizzy and dizzier and the English zombie cars were increasing in numbers and getting closer and closer and crowding them more and more and they couldn't find a McDonalds to go to the bathroom and they knew they were going to run out of gas eventually ....... the ending was not pretty.

I told my Canadian buddy that I would perhaps attempt to visit the UK one day, to see the old engines in the museums.
He sternly warned "Do not attempt to drive over there !".
I believe him, I would not attempt it.

My daughter dated a Brit for a while, and his driving was quite good considering he was having to reverse it all in his head.
The Brits do seem to act like they are in the Indianapolis 500, and getting somewhere first at a high rate of speed while getting in front of every other car on the road seems to be highly imperitive.
I told my daughter "he drives a bit on the wild side", and she said "You should drive with his dad, definitely a white-knuckle ride" (she visited his parents in the UK).

These days we seem to have a bumper crop of crazy drivers over here.

I had a Korean buddy in college, and he taught me how to do first-rate drafting.
I made the mistake of riding with him to lunch one day.
He only used two throttle positions; which were "floored", and "off", and one driving speed which was about 75 mph on small back streets with limited visibility. He was a superb friend though, and I miss that guy.

College was the best.
I had buddies from Ethiopia, Korea, Malasia, all over the world really.

Lloyd-ss said:
Greentwin,
It's doubtful you'll find too many gas stations in the middle of the Atlantic, either.
Click to expand...

LOL, that is why I would have my "AmphibiTank" floating behind me, to carry some extra gas.
I never go anywhere without my Amphibitank.

Any chance of a link to THAT video!

Sorry, that video is limited to "Amphibicar" members only.
LOL.

Luckily there are some Amphibicars on the market, but they are rather pricey.
.
Edit: Yes, I realize he is not looking for an Amphibicar link; a bit of humor.
L

Is an amphibicar the same as what us Brits called and Amphicar.
Bit of badly researched, as in none, history now. It was an American who invented the first amphibious vehicle. Way back in the early 1800s about the same time as Richard Trevithick was driving around Camborne in his steam road vehicle. The name given to the American steam vehicle, a boat with 8 steam driven wheels, was, Oructus Amphibulos. No, it's true, an American built a boat and had to fit steam driven wheels to it to get it to the water!
Well done America!

I have tried to use the correct spelling "Amphicar", but my fingers won't type it correctly.
I looked at purchasing one a few years ago; they are available in the US if you have the $$$$$.

A bit too much money for a novelty, and the insurace would be extreme.

I discovered the Amphicar when I was about 5 years old, going to the grocery with my mom.
I saw a car in the parking lot with two propellers sticking out the back, and immediately figured out what could be done with the car.
I told my mother about it, and she did not believe me.

They sit rather low in the water, and so probably not exactly extremely seaworthy.
I have seen some VW's made into amphibious vehicles, and supposedly they float well, I guess due to the monolithic body.

The main reason I would want an Amphicar would be to watch peoples faces as I drove down the ramp and splashed into the water.
They would be screaming and calling 911, and I would just motor away, waving and smiling.

GreenTwin said:
They sit rather low in the water, and so probably not exactly extremely seaworthy.
I have seen some VW's made into amphibious vehicles, and supposedly they float well, I guess due to the monolithic body.

The main reason I would want an Amphicar would be to watch peoples faces as I drove down the ramp and splashed into the water.
They would be screaming and calling 911, and I would just motor away, waving and smiling.
Click to expand...

At one point Volkwagen did ads with the Beetle floating in a lake. National Lampoon copied the ad with the legend "If Ted Kennedy had been driving our car, he would be president today." I believe some folks were rather offended. but I loved it.

For those with no idea of the event, have a peek at Wikipedia "Chappaquiddick incident". Another politician gets a free pass, this time for a homicide.

LOL, Stan and I think a lot alike.

The National Lampoon thing sounds hilarious, and yes, I know we should not make fun of such a serious incident, but it is still funny in my opinion.

I remember when it happened (that kind of dates me doesn't it?).
They would always gloss over that sort of stuff when it happened to the politically connected, and the news would say "Well, what an unfortunate and totally unavoidable accident that could have happened to anyone...........AND in baseball today........".

GreenTwin said:
I guess like the Titanic having two reciprocating steam engines and a single turbine; a hybrid approach to the power plant.
Click to expand...

That was quite a common approach in Merchant vessels up until about 1950. I sailed on two vessels built in 1947 (s.s. Urlana and s.s. Purnea) that had a triple expansion engine and a low pressure turbine coupled to the (single) main shaft. It was a way of increasing the efficiency of the steam plant. The turbine was taken out of gear when the t/e engine was reversed for manoeuvring.

I had a plastic model Amphi car.. but water got in and soaked the battery box... which rusted and the batteries turned to yik! The motor rusted up, so all my savings lasted just a couple of plays one summer. About the time of Supercar, on the TV. If anyone is old enough to have seen it, or even had a tv back then!
K2
L

Supercar, Fireball XL5, Dr. Who, I grew up with the magic of those TV programmes. I think Stingray and Thunderbirds came a bit later.

But do you remember really old puppetry like Twizzle, Four Feather Falls, Muffin the mule, the Woodentops, all be it for younger viewers, etc?
K2

But real Engineering attractions were the diesel road rollers where my Dad worked, rides on the Transporter bridge, watching steam locos working locally, on tracks that no longer exist, a the really special things were trips on the paddle steamer across the Bristol channel, where you could see paddles feathering, the large steam horizontal engines driving the paddles directly, with huge con-rods swinging around the massive cranks. Awesome! Until the day when a trial hovercraft service ran from Penarth to Weston-Super-Mare! That was rocket science in my experience! Beyond Gerry Anderson's creations!
K2 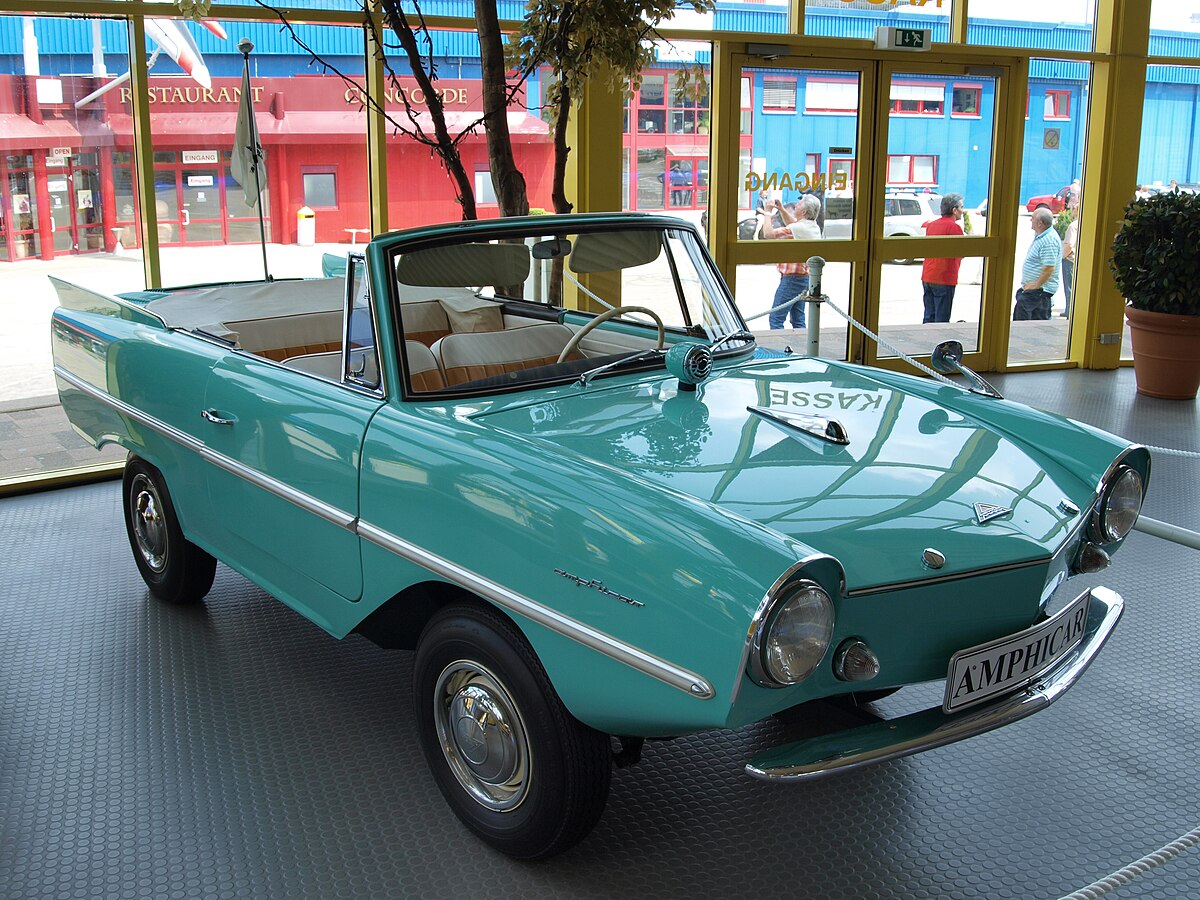 When I was in elementary school, My Dad took my brother and me and some other boys from the neighborhood to a "Sports Show" every year and I remember they were on display, along with films being shown in the display showing the cars in the water. I also have seen one owned by a car collector on one of our local rivers. A car buddy told me someone he knew (Maybe the person I saw?) tried to launch his on a local lake, and despite it being registered as a boat as well as a car, the park officers wouldn't let it in the water for safety concerns.

Regarding the Volkswagen, in WWII there was the Schwimmwagen: 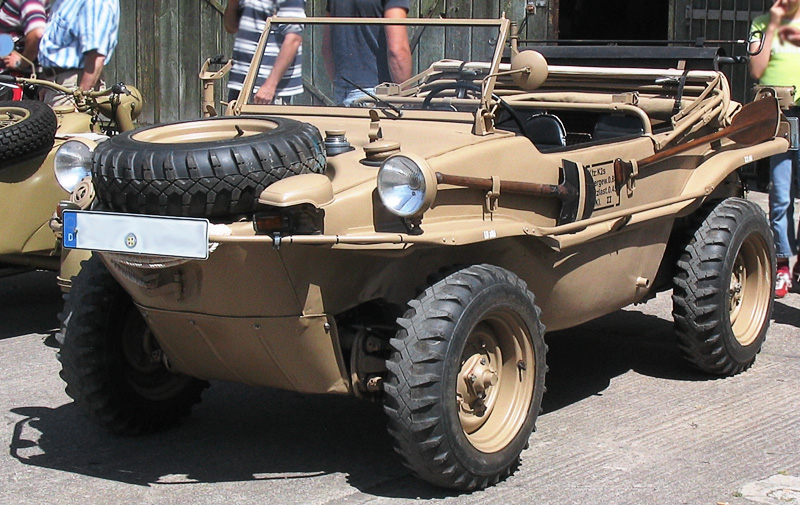 There were also other amphibious vehicles in WWII and since and they're all interesting.

But do you remember really old puppetry like Twizzle, Four Feather Falls, Muffin the mule, the Woodentops, all be it for younger viewers, etc?
K2
Yes! And Torchy the battery boy.

Getting a bit nostalgic, are we? Funny how a single comment can conjure up some old memories that have been hidden for years. We didn't have Muffin the Mule or Twizzle, who actually sound a bit lame, LOL, (sorry) but in the 50's we had an afternoon local TV cartoon show that was hosted by "Poop Deck Pappy." Black and white TV, and my brother and I had to go next door to watch because we didn't have a TV. The program was done live in a studio in downtown Norfolk VA, and each day a group of local kids got to participate on the show. Our Cub Scout den went one day and I remember being a bit aghast that Poop Deck Pappy was NOT really on a ship and that the "Heave me a line matey," was just a piece of fake rope thrown by some guy with head phones on. But of course, the bathroom humor of Poop Deck Pappy becoming Poop-on-the-Deck Pappy was hilarious. So much for our 2 minutes of fame.

Lloyd, "Nostalgia ain't what it used to be..".
We've had something old, here's something new...
Top 10 Incredible Amphibious Cars - Wonderslist
While browsing this a pop-up advertised something I may try and get on! I'm sure I have written something suitable for a list like this...
Top 10 Least Interesting Top 10 Articles

Back to Engineering though... During WW2, for D-Day, the US built amphibious tanks!
DD tank - Wikipedia
Surely the heaviest and least sea-worthy land vehicles to be converted for sea-trips! Sadly a lot of good guys died while getting ashore at Omaha beach particularly, in sea conditions worse than they were built to take. But those that did get ashore helped make this world and freedom we have today.
And let us not forget the DUKW... - one of the most successful of it's era?
DUKW - Wikipedia
Surely that is a classic Chevy we would all love to own?
K2

They use to operate duck boats in this city until that unfortunate accident in heavy weather on a lake somewhere in the US.

And I was amazed when I saw a photo of a floating tank.
That really does not seem possible, but of course the truth is often stranger than fiction.
.
You must log in or register to reply here.