The photos posted are of the castings. I got the same set when I enquired last week. I do not know the weight.

"The castings we have available at this time are the engine block and the oil sump only, as per attached photos. They are aluminum heat treated to 6061 T6 for better machining. The selling price is $300 plus shipping, which is about $25 to the USA.
Thanks for the interest."
F

aonemarine said:
Ouch!! What material are they cast in and what is the weight of the castings? Id like to see what the finished castings look like before making any decisions. That picture you posted was of the patterns??
Click to expand...

I don't think he is out of line for the price. The castings are very good quality. The picture I posted is the castings.
There are a lot of steam, and gas engine casting kits out there that cost more.

Im a back yard foundry man, to me it seems like alot because I can make my own castings for just a few dollars. The time spent making the patterns is another story. My hat is off to the guy that made the patterns. Very nice and detailed work.
M

Do you still have the castings, and ifso how much are they please

michael_au said:
Do you still have the castings, and ifso how much are they please

check post #13 on this thread. the email address to buy prints and castings are on that post.

Or is it derived from one, as the Gypsy Major was an inverted four cylinder.

I too once had the thrill of flying in both a Tiger Moth and a Chipmunk, although my first ever flight with 'hands on stick' was in a North American P-51 Mustang... The most exhilarating 45 mins of my life!

Cogsy said:
I too once had the thrill of flying in both a Tiger Moth and a Chipmunk, although my first ever flight with 'hands on stick' was in a North American P-51 Mustang... The most exhilarating 45 mins of my life!

My Aussie boss now 90 living in Bandanoon,nearby Sydney, was 18 year and trained to fly Spitfire .Soon after he got his wings and WW-2 was over.:wall:
He was all set to dog fight and shoot down some Japs.
Made it a must to visit him every year and after every visit promise him I will visit him again next year. Was a good boss.He gave me a chance to rise up thru the ranks over 20 years and retired as Ops Manager.He made me work my guts off.
G

I'm Goldstar 31 which translates as Royal Air Force 31 Squadron and whose aircraft still carry the Star of India as their emblem.
In my days -1948-50, we had Gypsies of all sorts. We had them in our Percival Proctors mks 3 , 4 and 5, we had them in as Gypsy Queen 71's in what was then the new DH Devons C1's which were actually Doves and as our adopted aircraft, those in Austers of the newly formed RAF Antarctic Flight. We sort of collected things on our little patch of green in the middle of London and had Air Observation Post Austers of 661 Squadron and an assortment of Spitfires of 601 and 604 Squadrons before they flew away to get DH Vampires.

As for Spits, we were left with 3. a RR Griffon, Rolls Royce Merlin and those bloody awful Merlin Packard things. Dear old SL-721 a Mk LF 16E is still airworthy whilst there is still a pair of Devons in RAF Cosford Museum. Old VP-981 is still airworthy but is now registered as a 'Civvy'. The last we heard of her was at John Lennon Airport waiting for an engine change- and then she flew away.
Johnny, my old mate used to mend the Gypsys which were notorious for oiling up- and one crashed on the Queens Birthday 21st April 1949 killing all 3 crew.

So RAF 31 is still flying alongside the Tornados of 617 Dambusters -and all that jazz. 1915 is our Century and with luck, we'll just make it.

Oh heck fellas I seem to have accidentally got something started here Gypsies, Merlins, Griffons, and even Packup & Witless (sorry guys ,bias showing, no slur intended but I am a Brit) all good Motors but I don't want to corrupt the OPs thread, so should I start a new one along the lines of "Favorite Aero Engine ?"

It is perhaps a good idea to ramble a little about the 12 inches to the foot variety of things if only to get some concept about what the miniature version is all about.

With the hindsight of old age, none of you would be quite where you are now had it not been for the little Gypsy engine and the men and women who learned their trade on them. The Battle of Britain- and that is only one instance was won by men who had sat behind the little Gypsy not much earlier.

Quite, well said Sir, amazing little engine which deserves to be celebrated.

It would make a splendid model, a tribute to an unsung hero, not just in times of war but peacetime too, and the many brave men and women who trained on them.

The last post on this was about 8 years ago but I recently (3/21) purchased the Keystone castings for this engine as well as the drawings from John Chenery. The castings are still $300 USD. Only the top and bottom crankcase halves are available. I‘m in the process of casting (lost foam) the gear cover / oil pump housing / magneto carrier and the carburetor. The carb will be lost wax.
I think the original kit also included a casting for the crank bearing caps and possibly the dummy magneto‘s that conceal the distributor and contact points.
The quality of the Keystone castings looks very good. I have not started any machining as yet though.
R

Not sure if this is of interest as it’s not machining, more pre machining, but here is some account of the the foam pattern for the oil pump housing/ cam gear housing etc. derived from the Chenery Gypsy drawings. The oil pump cover (with the figure 8 looking bit) is designed to be cut off the casting so is made overly thick. The pattern is a mixture of a thick housing with thin‘ish webbed ‘arms’ to support the ‘magnetos’ / distributor so there is some challenge in successfully casting this (at least for those of us not skilled in the art, this is my first try at foam casting… in case anybody thought I knew what I was doing !) 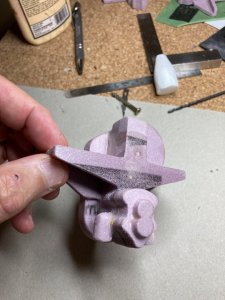 The first attempt was not a success as the metal did not reach the ends of the magneto support ‘arms’ before it cooled. This used a simple sprue arrangement into the top of the oil cover, you can see the remains of it here. No additional gating, so not really a big surprise I guess. I did use a vent at the other end of the pattern, but I will dispense with it next time, it’s just a heat loss. Lessons learned at least. The second pattern attempt with a repositioned sprue more centrally placed and additional gating attached. I put a dog leg in the main feed sprue to try and reduce turbulence in the pour as there was evidence of ‘oxide folding’ in the first casting attempt. Probably only the gates to the arms are needed but this is all experimental anyway. 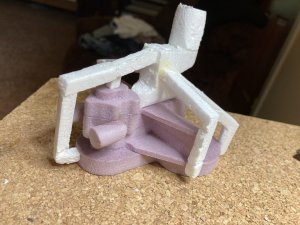 Last step is coating the pattern with a refractory (aka drywall mud) to improve the cast surface finish and leave to dry. 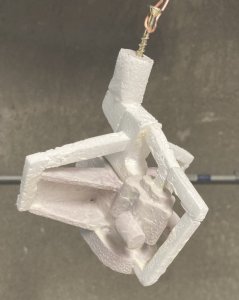 Interested? Are you kidding? Count me in! I think this is absolutely applicable to the hobby and is of high interest. I love following threads like this. Keep it coming.

MrMetric said:
Interested? Are you kidding? Count me in! I think this is absolutely applicable to the hobby and is of high interest. I love following threads like this. Keep it coming.
Click to expand...

OK. Cool.
I poured a casting of the revised pattern and as expected there was a good bit of improvement In the result. The webs of the magneto platforms that caused premature cooling of the metal last time were completely filled this time around and it looks like all the pattern edges came out reasonably well.I think the sprue position was the chief factor here, the additional gates may have helped but at least one of them did not fill . 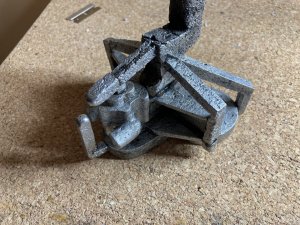 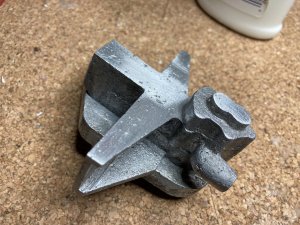 Here’s how the casting joins to the crankcase, it becomes the cover for the gearing from the crank up to the cam shaft. The piece I am holding is the oil pump. Just above that there is a housing for a shaft with a 90 degree helical gear. The secondary shaft then drives the dummy magnetos on the two horizontal armson either side for the distributor and points.
So there is a lot going on in this little casting ! 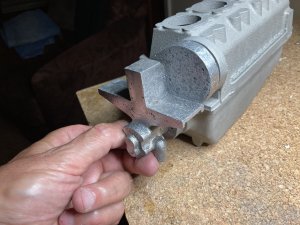 I’ll keep this one but I‘m going to have one more shot at this. The issue is that there is quite a bit of pitting on the rear surface (just above my thumb) which will be very visible. I should have built the thickness of the pattern up here so it could be milled down to size. There are also a couple of bearing caps that fit on there as well so it was an obvious oversight not to allow for machining.
Third time lucky.

I'm no expert with casting... And, in fact, I'd say that you clearly know more than me. However, even a nincompoop can sometimes help one remember forgotten steps. To that end, I guess there are two questions I would have for you. First, I assume you degassed the metal prior to your pour? Second, what alloy are you pouring (where did you get your metal). It looks like you've got quite a bit of porosity voids there, as you have noted.
R

Good Questions.
The metal used was from a scrap alloy car wheel.
l have done some sand casting in the past and have had better luck with cast alloys than extruded stuff like drinks cans and window frames etc.
I did not use degassing tablets in either of the pours and on the subject of gas and voids here is a cross section of the first casting. 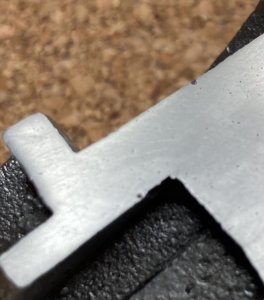 This shows a couple of pockets that formed at the surface. One on the top edge and one in the middle of the photo. Plus a cloud of micro pores across surface.
Here is the top edge zoomed in. 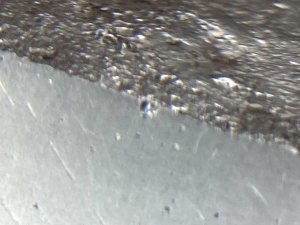 These are relatively small in comparison to the much larger ‘craters’ on the surface maybe 3mm across in some cases. Most are a superficial depth but others are maybe 0.5mm deep. 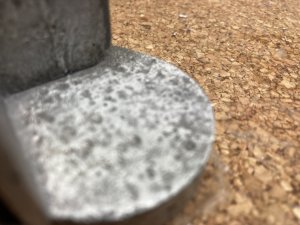 Is this larger pitting gas voids from the metal or maybe some residual of the foam that fails to escape. If they were gas from the metal I would have thought the metal at the surface would have cooled far quicker than the interior metal and the voids would not have grown so large.

I‘m using quite fine sand that is packed by vibration. I’m wondering if the foam gas is not absorbing well into the sand because it is so fine and I should try a coarser sand with more permeability.
I’ll add that to the list.
Thanks

I have often wondered about how well the foam burns out or gets displaced. So, you are definitely hitting an area that is a curiosity for me.... I'm more familiar with die casting than with any of the investment type of casting methodologies. And even there, I grew up in that area (die) but never did it myself. I went into electrical engineering instead of following the family tree.
You must log in or register to reply here.
Share:
Facebook Twitter Reddit Pinterest Tumblr WhatsApp Email Link