Apart from the bore and stroke being copied from the PeeWee V4 my plans are not really based on any particular engine, the crank layout and firing order are the same as a small block chev but then there's probably many engines out there that follow the same firing order, while I call it my own design, you could say that word design is used rather loosely as I can see many many images of V8 engines on the internet and then it's just a matter of scaling it down and juggling dimensions and clearances to get it to fit, once I have a part drawn I print it full size so I can get an idea of what it will look like in real life, so I guess you could it is just copying.

I'm drawing it up in autocad and also modelling it in fusion360 mainly to get practice at 3d modelling, I've been using autocad for around 10 yrs and feel quite comfortable with it and even though I know I don't use all the features offered I can get by and produce reasonable drawings. Fusion360 is new to me since last xmas and is something I would like to get better at.

SailplaneDriver said:
I know what you mean, retailer. I've been modeling the Li'l Demon in Fusion 360. I frequently could do the machining faster than the modelling but it helps me understand the parts and hopefully keeps me from making too many mistakes. I also find that setting up and holding the part frequently take much more time than machining.
Click to expand...

Yes I like to have things modeled up before building anything. I like to check fits and stuff first.

Echesak said:
But being a gluton for punishment, I machined my block from steel.
Click to expand...

Spent a bunch of time sizing stock and screwing up the dimensions of the main bearing caps. Why is it I screw up on the simple things like cutting these steps? Both sides went too far to the center and the right side excessively so. I was using a vise stop so I screwed up all three. Not paying enough attention I guess. Will try again today. 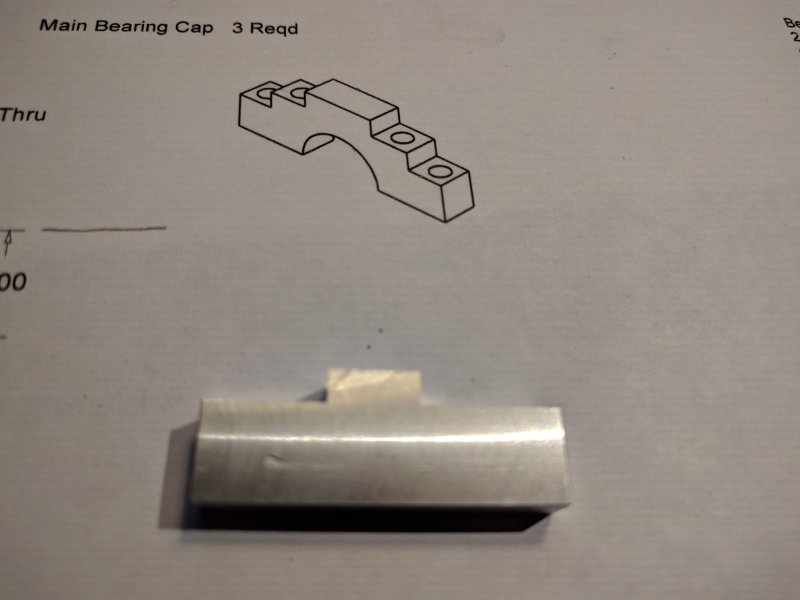 Got the main bearing caps done yesterday. Don't have the right length cap screws so ordered them from McMaster. Bored the cylinders to size today, at least the first diameter. Have to do three more operations on each cylinder, two more bores stepped plus a relief for the water jackets. Tedious and unrewarding work since it is merely refining a feature I already made.

Finished the block except for the crank and cam bores. Working on the oil pan. Screwed up the first attempt at the pan and working on the second. I don't have any long LOC end mills so ordered some. Can't finish the pan until they arrive. I tried using short LOC mills for the inside of the pan and they rub messing up the finish. Not a problem on the inside but not the look I want on the outside. In the meantime, I made the valve covers. 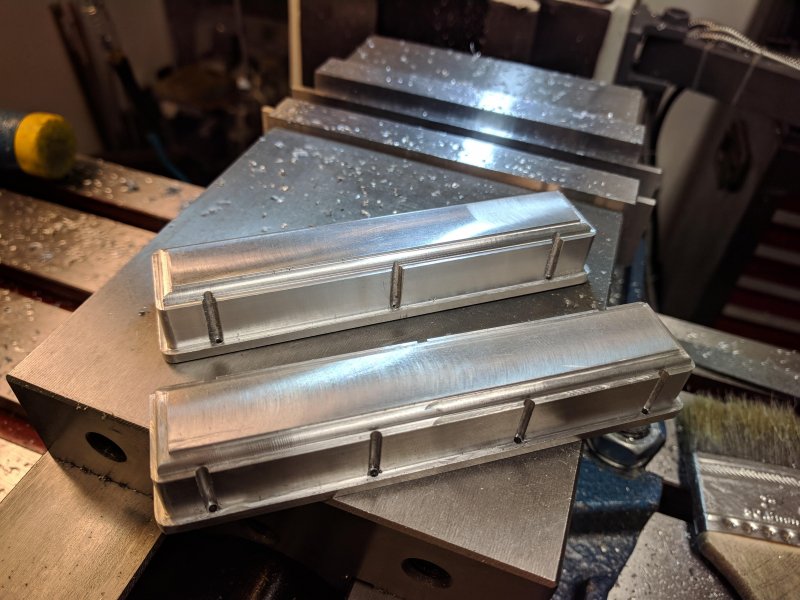 I'm debating whether to start on the crankshaft or the heads next. I'm going to need some help and suggestions on the crank since I have not made a single piece crank before. Any input or links to crank builds would be appreciated.

I have made and documented several crankshaft builds on the forum but I'll be darned if I can find them so here's one from the other forum.
gbritnell
http://www.modelenginemaker.com/index.php/topic,3846.210.html

Got started on one of the heads. Figured I'd do one complete which will probably wind up as a practice run. Here it is with the head bolt holes drilled and countersunk, and the pushrod holes. The plans show a standard 5.5:1 compression ratio with an option for 8:1. Is there an advantage of one over the other? I know that higher comression typically results in higher power output but this is a working display model. 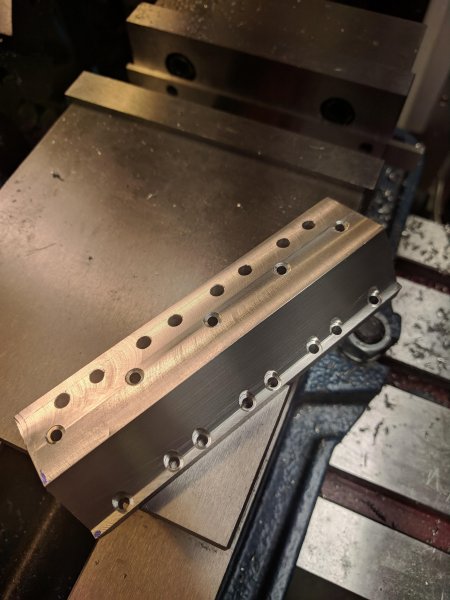 The higher compression ratio will give more power. It will also put more stress on the pistons, wrist pins, rods, and crankshaft. It will also affect the ability of the engine to idle down. I built the prototype Demon with the 5.5:1 ratio because it is a display and will never do any real work.
R

You look to be getting on with it at a good pace, I'm still working on the block and crankshaft and have not yet finished the head drawings - I checked out the crankshaft building posts made by gbritnell, well worth a look, he does some really good work - much better than I'll ever be.

retailer said:
You look to be getting on with it at a good pace, I'm still working on the block and crankshaft and have not yet finished the head drawings - I checked out the crankshaft building posts made by gbritnell, well worth a look, he does some really good work - much better than I'll ever be.
Click to expand...

I keep getting stalled with either lack of material or tooling. I just got the long LOC end mills I ordered so I can try and finish up the oil pan and get the block bored for the cam and crank. I looked at gbritnell link. I think he's forgotten more than I know about this stuff - and his work is first rate.

I got the two heads mostly done and have found a mistake. 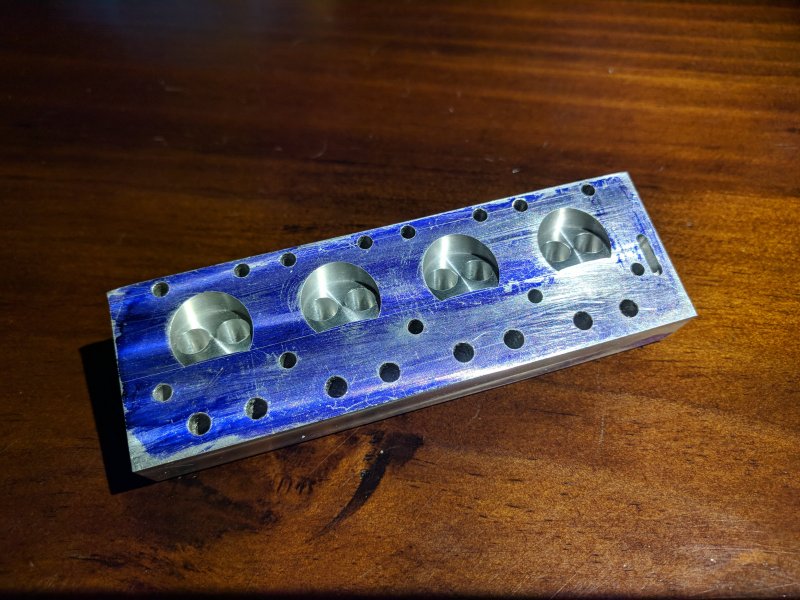 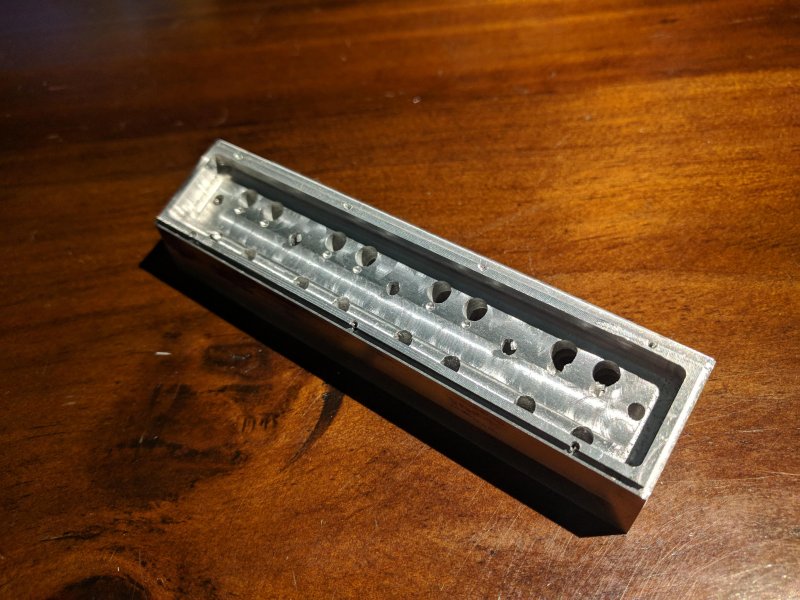 Problem is in the top. The valve locations are off on the top but not on the bottom. The rocker stud locations break into the valve bores. This really sucks. I put a lot of time into these. Now I have to figure out what I did wrong.
B

Yes. I misunderstood the plans and thought the dimensions were on the plane of the head bottom, not with the head angled at 22 deg. I will have to redo them.
R

It's a bummer when that sort of thing happens not sure about you but for me when I make those sort of mistakes I can never make up my mind if the loss of time or loss of material is worse.

Got both of the heads done. I got two good onesout of five tries. Now to try the crankshaft. 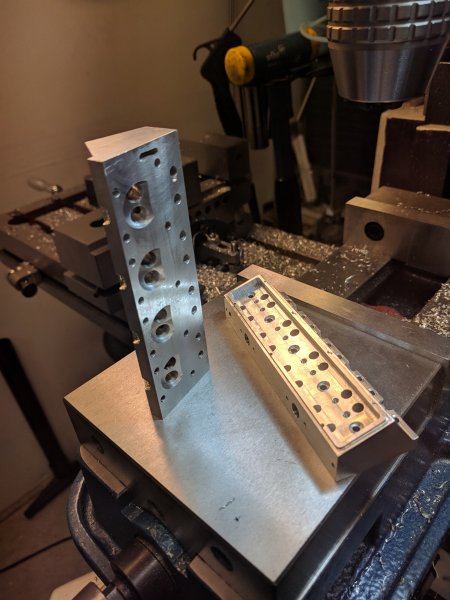 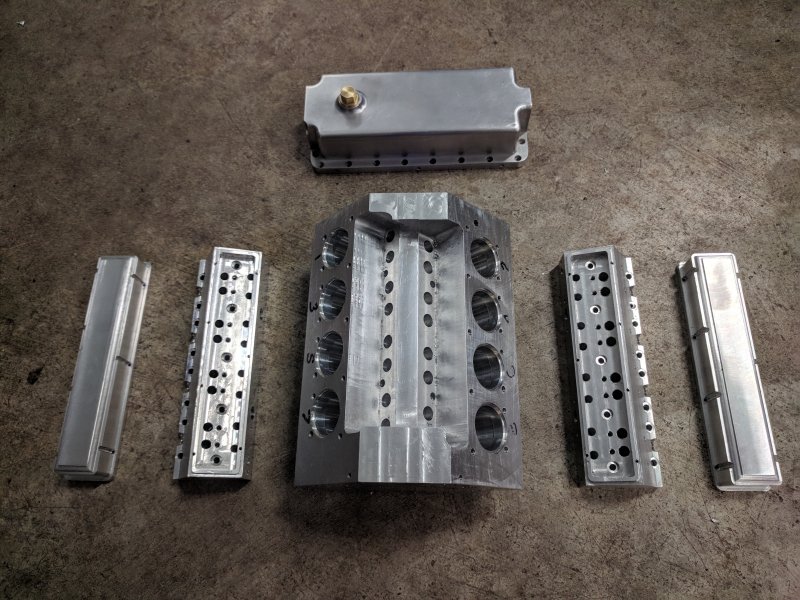 OH, how many times have I misunderstood plans. 22 degrees is not the same as O degrees. GGGRRRHHH and I never throw away my mistakes. I keep them to remind me, "Don't do that again!!!"
Grasshopper

I was practicing making a crankshaft out of aluminum 6160. Sequence was to do the rod journals first then the mains starting from the front and going to the rear with the rear driven and the stock between centers. I milled out much of the excess but only for the journal I was working on. Got the 1-2 journal done without drama. It grabbed on the 3-4 journal, bent at the 1-2 journal and spit it out.

Is aluminum too soft to try this or was it just lousy technique? 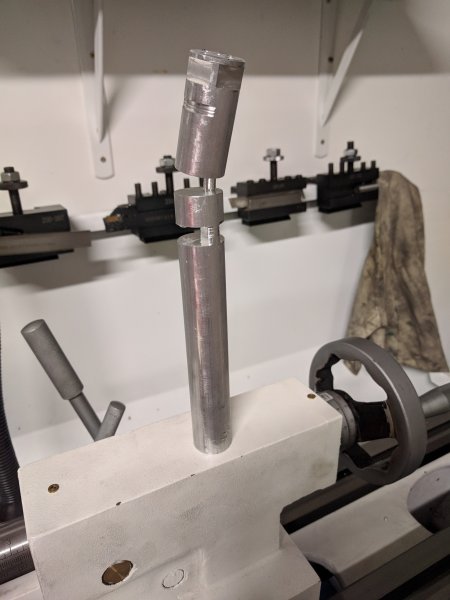 What worked for me when I was making Bazmak's 2 times Cirrus Compressed Air V-8 and botching up 3 cranks, was to do the mains first. Then with the crank in the offset jigs, using a parting tool (about 0.125 wide) to start on the rod journals. Start from the tail stock and work on the journals towards the chuck. After each rod journal is made, make some biscuits to slip into the rod journal space that you just made rather snugly. Then when you go to the next journal, give a little snug pressure on the off set jig in the tailstock with the biscuit and this should give you some stability. It's time consuming with the cut off blade, but you shouldn't twist another crank.
Grasshopper
R

Quite a few forum members (me included) find that if the bulk of the metal is machined away in the mill there is less chance of a disaster in the lathe.