My client is a highly intelligent and knowledgeable clock collector, here is his description of what he wanted. Quote:


On the cover of the October 2003 issue of Horological Journal was a beautiful great-wheel skeleton clock by the firm Buchanan. I was interested to see if the firm was looking to sell this clock. After some discussion it was learned that this company was looking to have specialty commissions. Both I and a friend of mine were interested in hiring the firm and it was decided that he would initiate the first commission. That has since been completed and was featured in the April 2006 issue of Horological Journal - a magnificent wall hanging regulator featuring dual counter swinging pendulums and movements based on Breguet's famous design, but including a unique escapement and remontoire system.

I wanted my commission to be unusual and unlike anything built before. My three guiding principals for the clock were that it had to have scale (an imposing presence), movement (many things happening to catch the eye) and complexity. Of course it had to look beautiful incorporating all the basics of good design and fabrication techniques as demonstrated by the master clock makers of the 18th - 19th centuries. All to maximize visual impact. What you see here is a full scale mockup done in wood of what has now begun to be manufactured in metal. The overall size of the movement is 24"w x 29"h x 18"d. With the stand and case 36"w x 77" h x 24" d. Including the weights it's mass will be about 600-700 lb. No expense has been spared in the design. It is my belief that this firm is possibly unique in it's ability to build such a challenging project and to apply the high standards expected for such a monumental effort.


You can see a lot more here at his website. http://www.my-time-machines.net/my_current_project3.htm

We had many discussions and I was sent many photographs of other clocks that had mechanisms or styles that he wanted incorporated. He also sent sketches of possible layouts.

Buchanan then had to produce a set of pencil and paper drawings in 2D of the presupposed design. Then we built a mock-up in wood and plastic. I sent this mock up to Chicago for his approval.

All the mechanical design is done in house,on a traditional drafting board. Only recently have I started to use 2D cad.(Draftsite) My client will follow the whole design procedure and often will have input in details of construction or suggest ideas that can be incorporated.

CZ 121 leaded engraving brass by choice or CZ121 drawn bar. I very rarely lap anything , as you say , there is danger if embedded abrasive ,but often use a burnisher to 'compact' the surface finish on a high tolerance finish. Sharp smooth tools produce an almost polished finish that can be controlled to 1/100 mm easily. Attention to corner radius's and sharp corners are important. Good tools are a great help.
Jewels and ball races are used for almost all rubbing surfaces.

As for the Antikythera mechanism, that is another story altogether. You are not even sure what it actually should be! The detective work is more than the construction. I don't know where iwould even start on that.

Amazing. Even the wood mockups are works of art. All done with pencil and paper. What a testament to thousands of years of clock making, from wooden gears and water wheels through the great European traditions to the pinnacle of the art with this clock. It would be worth the trip to Chicago just to see it, if that is where it ends up.

The Antikythera people have been scratching their heads for years. Your insight into how such mechanisms are constructed would be valuable to them. The interesting thing is how old it is. That means the early foundations for complex gear systems goes back even further. Those makers had to create each gear, bearing and shaft entirely by hand. The depth of human creativity in mechanical construction from then until now is a fascinating study. I can understand why your client is so interested in it.

It's just an awesome, beautiful testimony to skill, persistence, craft and imagination. A truly wonderful creation!

Ah well, back to hacking out that chunk of aluminium for a gear I was going to make.......Sigh!

Thank you for the compliments. Terry I know your work , so it is a compliment indeed.

This is where we are now.
The inner planet gearbox is practically complete.
This is gearbox in two halves 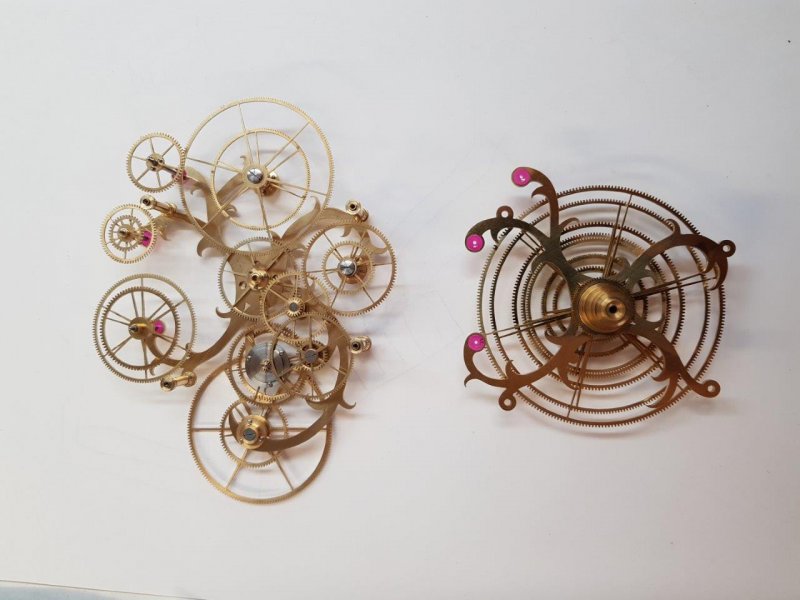 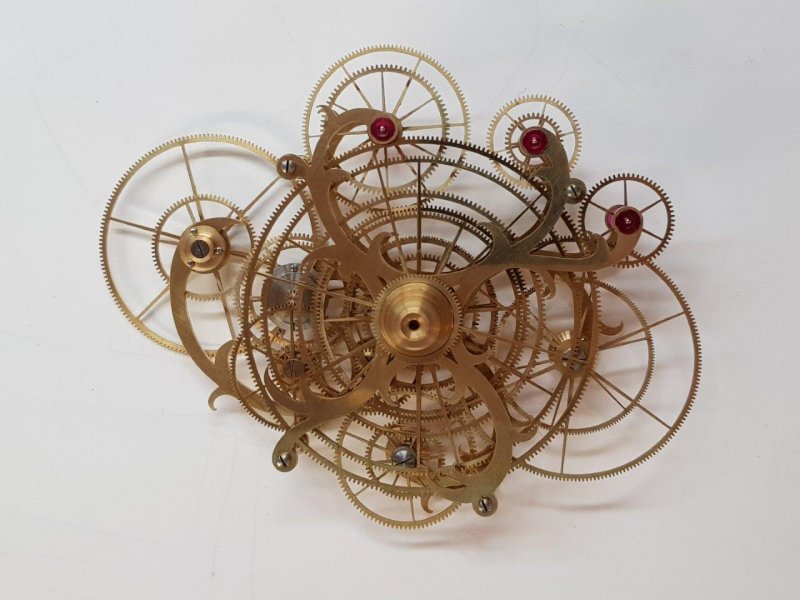 There are about 40 gears here.
It is not all that big either 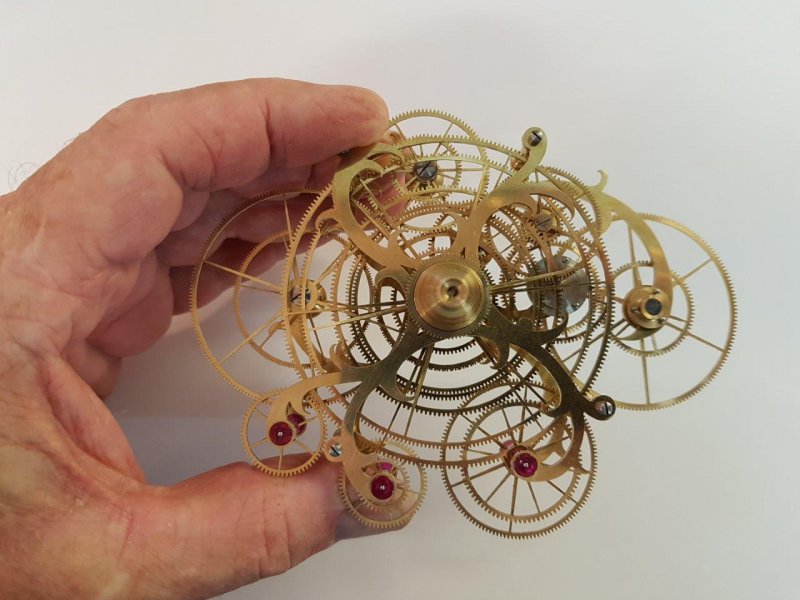 There is 15,5 mm between the plates, less than 5/8th of an inch
Here it is with the rest of the orrery. 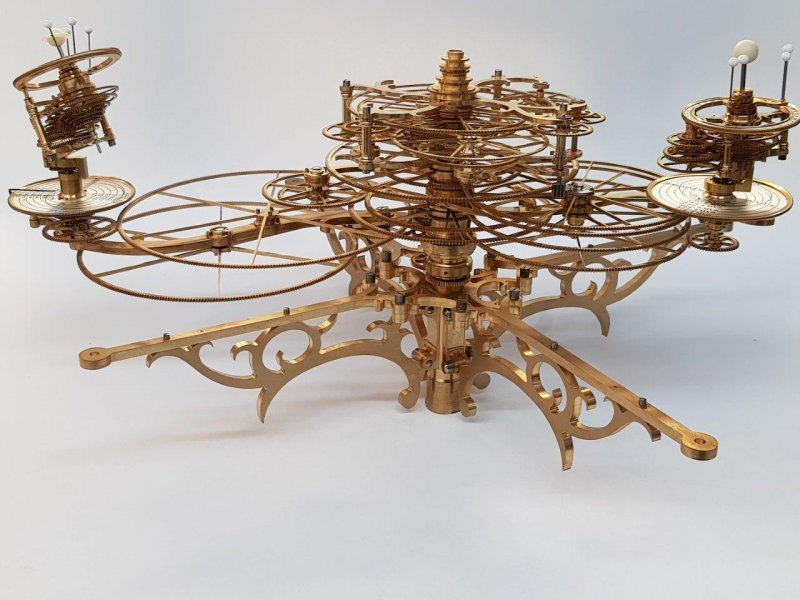 Here it is in the clock. 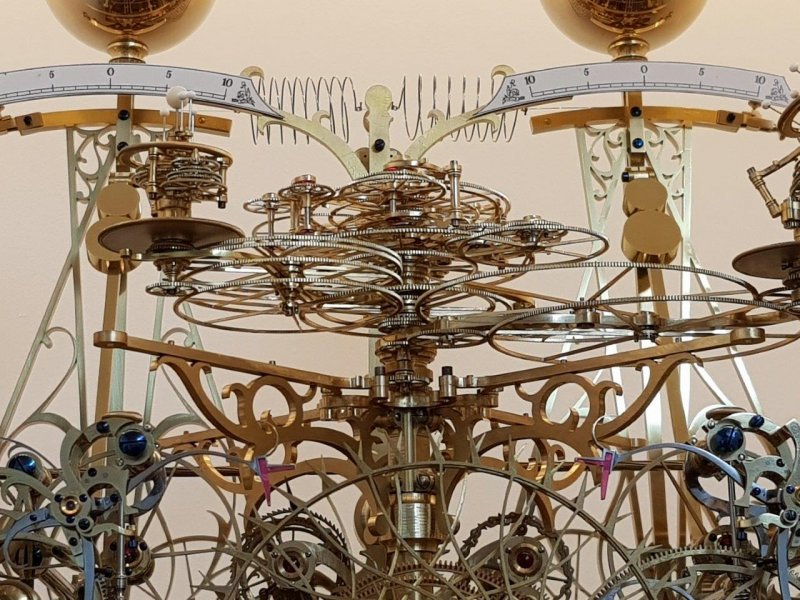 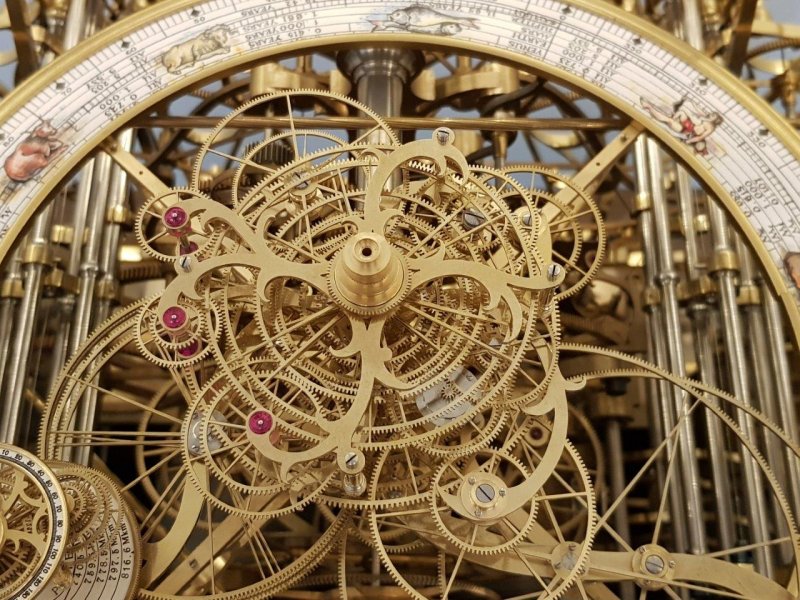 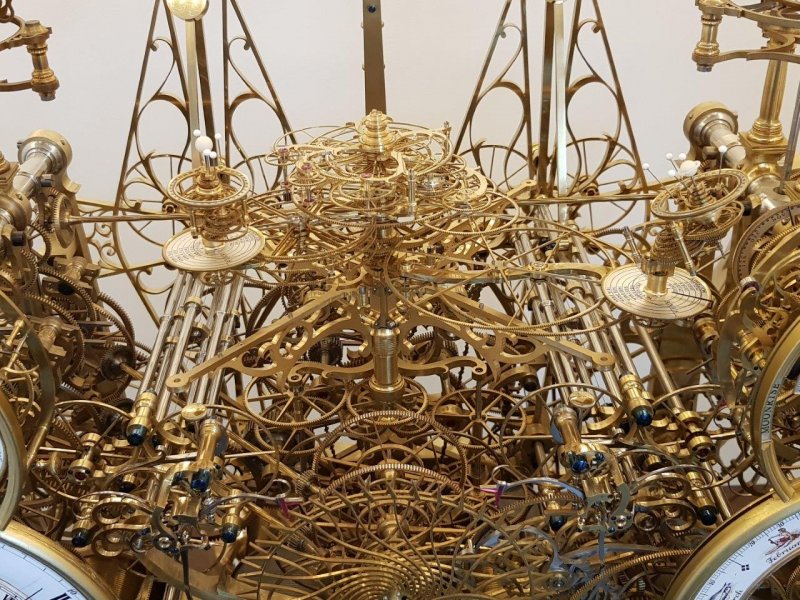 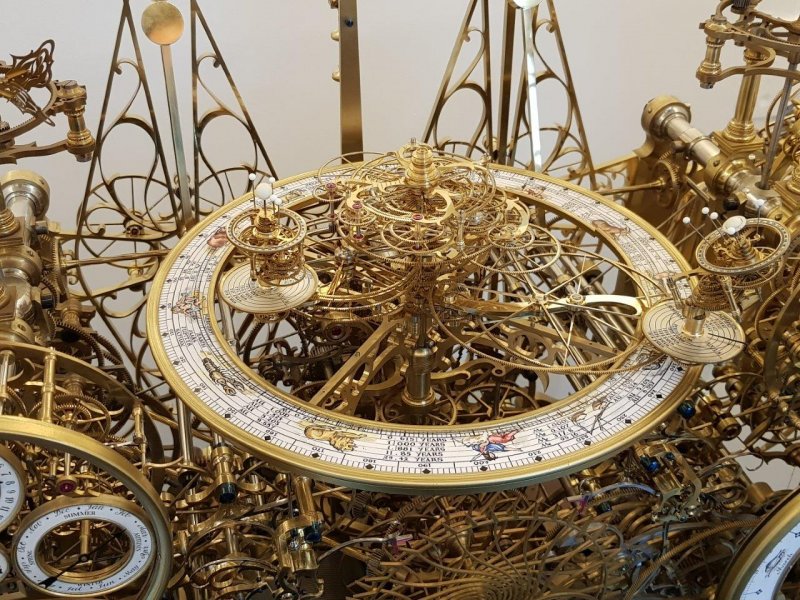 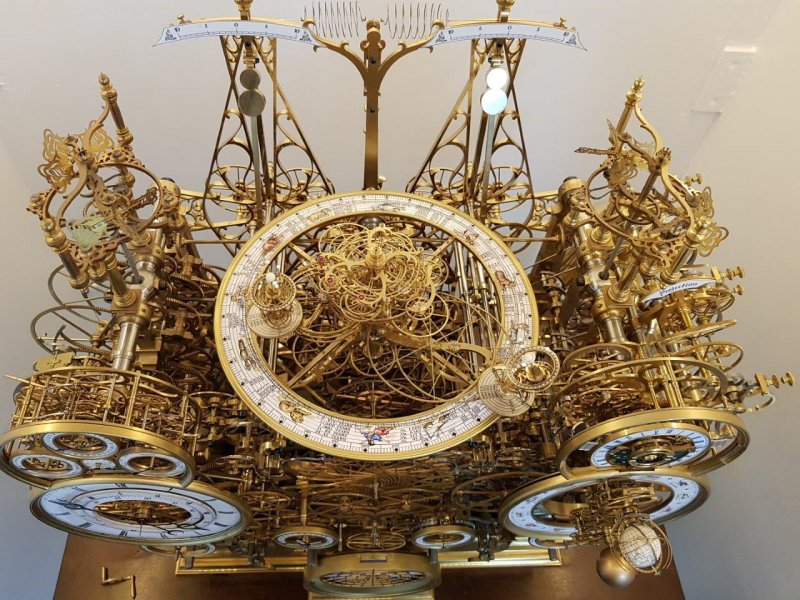 It's so delicate looking that a lot of engineering had to have gone into making sure it can support its own weight. No wonder the gears had to skinnied down so much. And the frictinal losses in so many moving parts must have been staggering to keep track of. It must also be really interesting to listen to. With so many parts it's probably musical. Be sure and record a sound bite before you send it away. - Terry

I'll bet the assembly manual will be impressive.

I can’t believe that the gear wheels are cut by hand. The video showing this is unbelievable. The operator is cutting dead straight on the spoke outline with what looks to be a cranky old mechanized coping saw. Is he pumping it with his foot? Certainly shows the high level of accuracy that could be obtained historically. I can’t help but think that a whole bunch of parts could be cut out of a sheet of brass a lot faster with a laser or water jet

Shopgeezer said:
I can’t help but think that a whole bunch of parts could be cut out of a sheet of brass a lot faster with a laser or water jet
Click to expand...