I had a look at all 21 pages and I found a lot of different programs.
I would like to build a controller with 4*4 pad and the 4 row LCD display.
I am little bit confused, where to find the latest version of Bruces program together with the wiring plan.

awake said:
Skyline, I understand your point. Earlier in the conversation, it sounded like the suggestion was just to put a DC motor on instead of a stepper, as though one could just slap any old DC motor in place. This is where I hope the DC motor in question is actually a servo motor! But let me be the first to say, I may have misunderstood the intent of that earlier post.
Click to expand...

I agree completely, The "motor" in question would need to be either one of the newer "self correcting" steppers with an internal position sensor and feedback loop to correct for missed steps or a true servo motor with a built in driver that could accept the same control signals (Step/Direction I assume). Both are pretty expensive components due to their complexity.

The cheaper and most often adopted solution (even in some quite large and expensive machines) is good old fashioned open loop steppers provided they can develop sufficient torque to overcome the likely resistance.

In a fault condition where for example an axis inadvertently hits a solid object that it shouldn't, open loop steppers actually have a slight advantage, they will lose steps until the controller "thinks" they are at their final position and then stop.

In the case of a servo, due to the feedback the controller "Knows" that it is not in it's final position and may continue to drive the motor in an attempt to get there.

This is a generalization of course and not always true. In reality overload protection should protect both the motor and to a lesser extent the machine. (whatever it may be).

So the choice is up to the individual both open and closed loop will work but for this particular application, I personally would stick with plain stepper motors.

skyline1 said:
In a fault condition where for example an axis inadvertently hits a solid object that it shouldn't, open loop steppers actually have a slight advantage, they will lose steps until the controller "thinks" they are at their final position and then stop.
Click to expand...

Are the stepper drives better now, I had a Summit-Dana Bandit control on a Bridgeport clone and the control did know when it hit something solid, it blew the power transistors on the axis drive?
R

today I got the 4*20 LCD Display. During lunch, I connected the display and a Keypad switch to my Arduino uno an installed the original program of Bob.

The keypad did not run as it should, so i changed the wiring as suggested. Now it works.

Later i will test the program with my rotary table. I also downloaded a program with Accelstepper from this thread. I will also test this version, because I like the Accelstepper library to run Stepper motors. Next step will be to search for a nice box. At the moment I am not sure if should put the power supply into the Arduino box.

I had to go back to the beginning of this thread to see, that kquiggle has two rotary table sketches.
So I loaded the version Table_Control_2019_7.25.
After making the setup, it works without any problems, but it has hard start and stops for the stepper.
After uploading the sketch Table_Control_2019_V2 4.69, the output of Pin 2 looks strange at the ozilloscope.
But I will connect the arduino to the stepper driver to see how it run.

just loaded the sketch with AccelStepper. It runs smooth without any problems.

So, special thanks to kquiggle for this sketch, I really like it.

L98fiero said:
Are the stepper drives better now, I had a Summit-Dana Bandit control on a Bridgeport clone and the control did know when it hit something solid, it blew the power transistors on the axis drive?
Click to expand...

Failures like this are far less common with more modern drivers although not impossible.

I have the plugin type on my 3d printers and I have had the occasional axis crash. None of them have resulted in blown driver yet or a burnt out stepper motor.
Usually just a failed print.

These crashes are almost always due to errors on my part (poor slicer settings or an incorrect configuration usually). not a fault in the machine itself

These little driver boards are remarkably inexpensive and easy to obtain. Being plugin they are also fairly easy to replace. I keep a couple of spares just in case a failure should happen but to date have not needed them.

One caveat to this is that although they do have remarkably good overcurrent protection it is adjustable and needs to be set appropriately to the stepper motor being used.

The stepper drives on your Bridgeport were probably much larger and more powerful than these though and would probably need more sophisticated protection simply due to the larger amount of energy in the system.

the program is still working fine. The output of the Step Pin 2 is still looking strange. I have never seen such a signal duty cycle with AccelStepper.
Is there any PWM regulation of Pin 2 in this program? 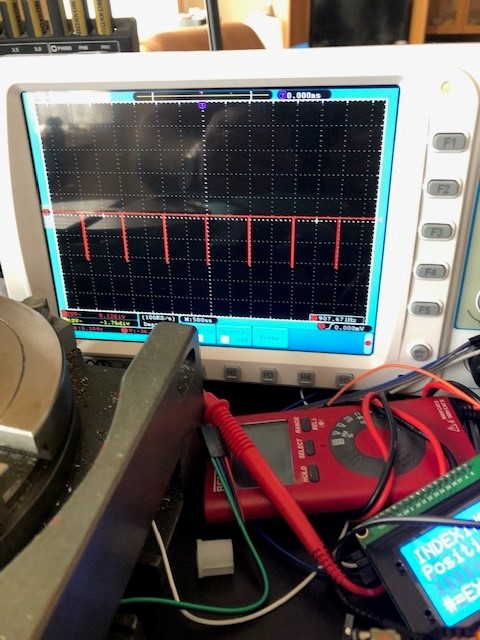 skyline1 said:
The stepper drivers being used in this project are likely to be the plugin Arduino type (A4988 or similar) or the larger TB6600 type if the motor requires it

Both of these seem to be remarkably rugged and tolerant to accidental abuse
Click to expand...

I finished my rotary table project today. Special thanks to kquiggle who gave me the support I needed. I decided to use annother keyboard. I do not like these membran switch bords. 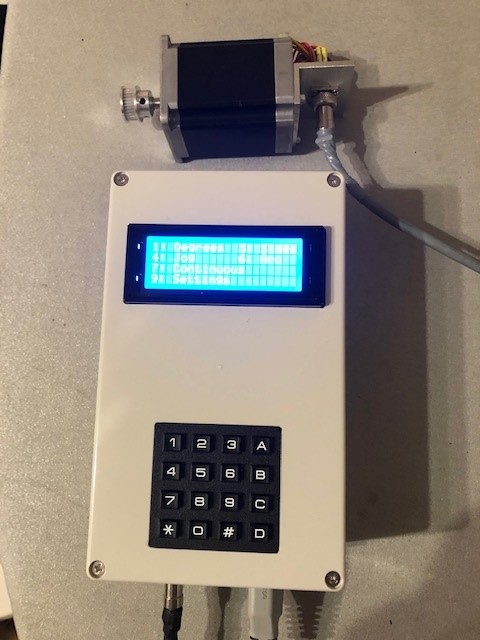 tjwal, It doesn't look like you ever got your answer, so I'll jump in and say that it's probably this one:

Worm gears find many uses in engineering applications due to their compact size and high gear reduction ratios. A disadvantage of this type of gear set is that only one tooth on the spur gear is engaged (or "in mesh") with the worm gear at any time. This causes high contact stresses which can...

How many steps/PPR are the encoder ?

I have used for equipment a electronic counters

Does anyone use a encoder like they use on mill DRO?