First I want to say what a fantastic site this has been. I've learned a lot from just looking through other's builds. I've got a project that I started the design work for months ago, but just now started the machining. Here is my CAD model. While this engine is supposed to be a 1/3 scale LS1, I couldn't exactly just scale all of the dimensions, so I had to draw it all myself. Thanks to stevehuckss396 for helping me sort out the camshaft geometry. 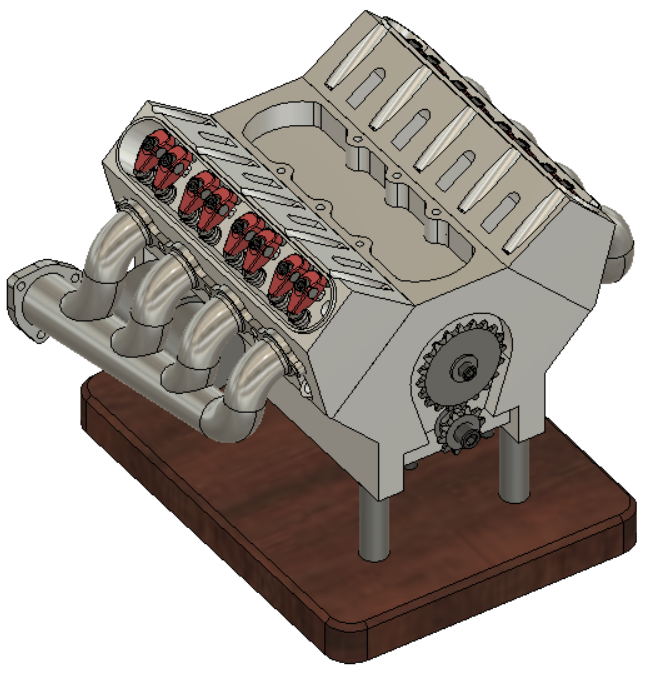 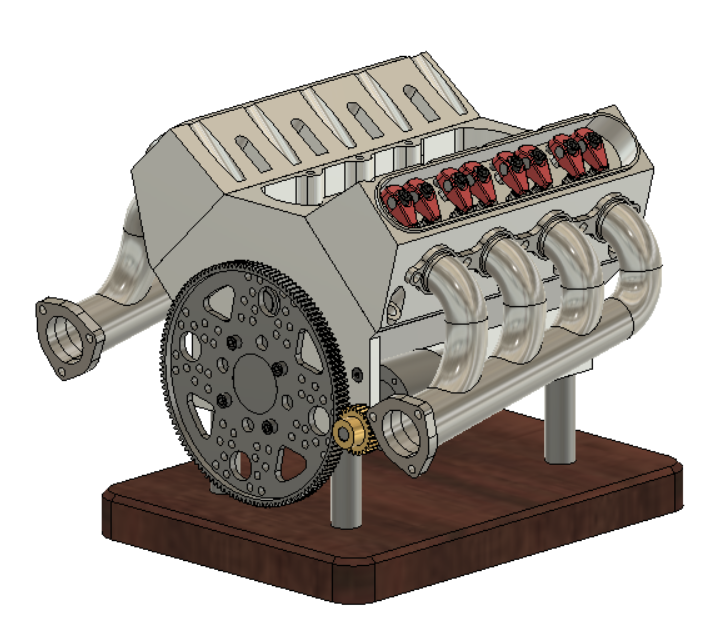 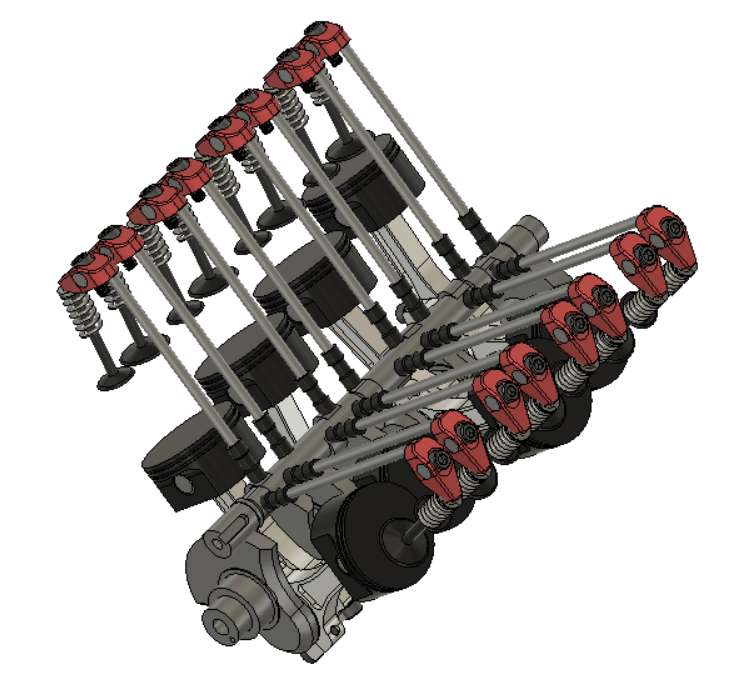 My goal is to make all of the parts, but this was not designed to be a running engine. I'm not planning to do lubrication, compression, fuel, or ignition. Three is a small DC gear motor that mounts where the starter should be on the LS1 so that I can "run" it by giving it 12v and watching all of the parts move.

I am a student at a local technical college in the machining program. This summer is my last quarter and I wanted to learn more about multi-axis CNC machine work. Much of this engine project will be completed on large CNC machines that aren't necessarily for home use. Sorry if that turns anyone off to this project.
B

I've made a start on the machining of the parts over the last two days. I began with the rocker arms. I know, most people would probably start with a more critical component, block, crank, etc. Since the block and other parts will be machined using a 4th axis, I wanted to start small learn how to program the 4th axis before jumping in on more complex parts. This started out as 1/2" aluminum bar stock and here it is after completing the first operation. Off the mill, I used the saw to cut it off the rest of the way before starting on Op2. 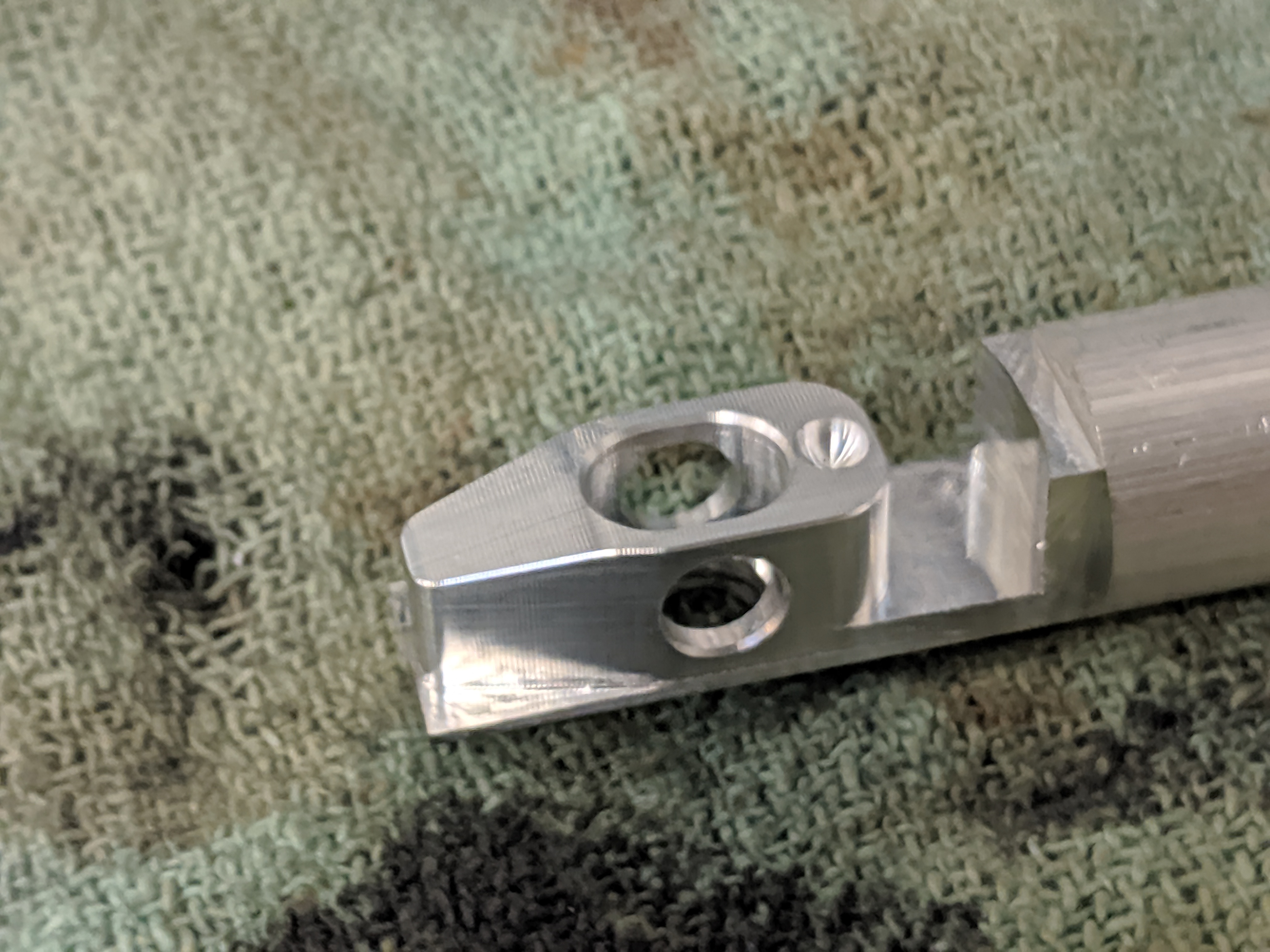 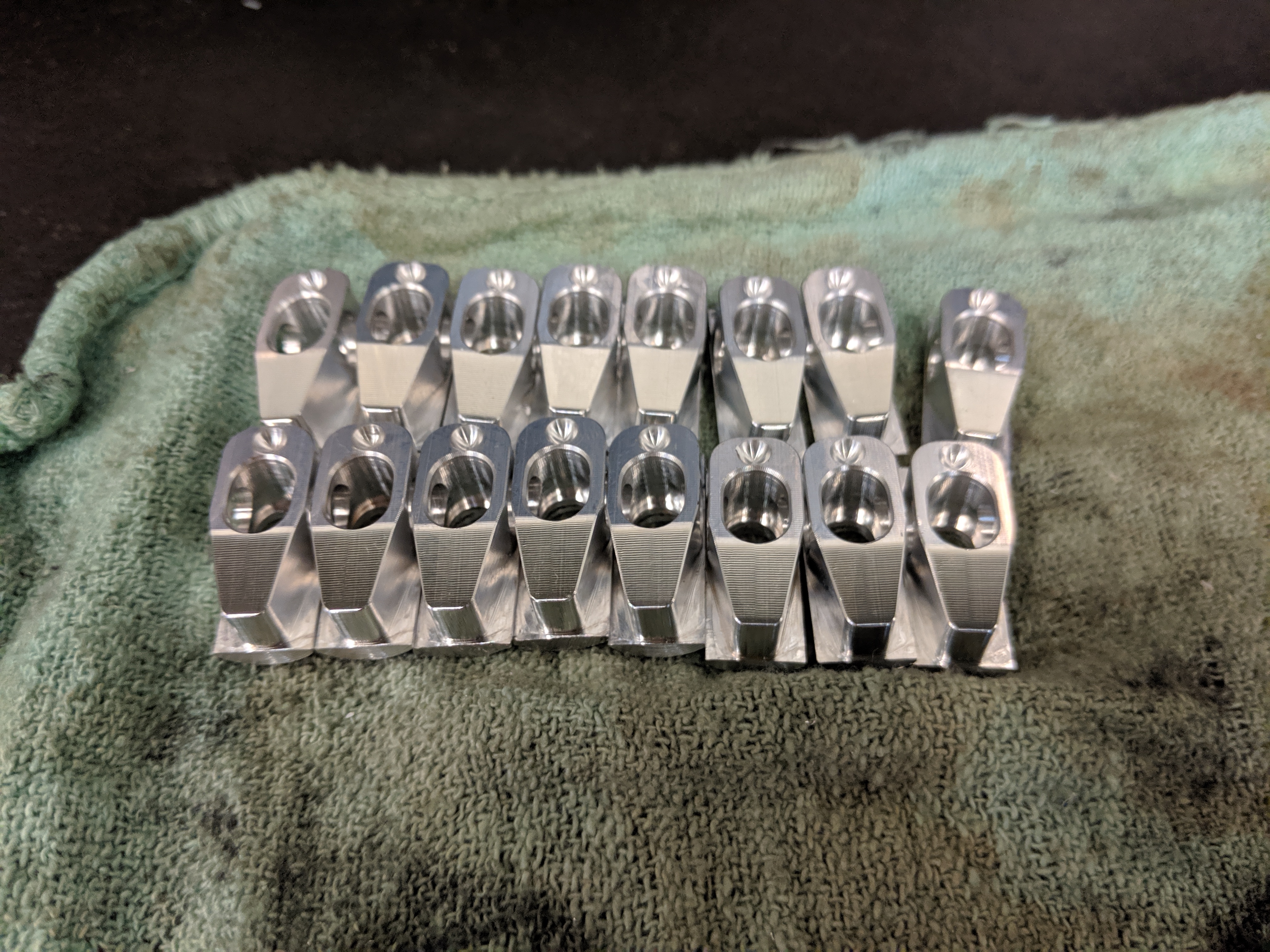 For the second operation on the rocker arms, I made some quick soft jaws to hold it in the vise. Here it is after the final contouring. 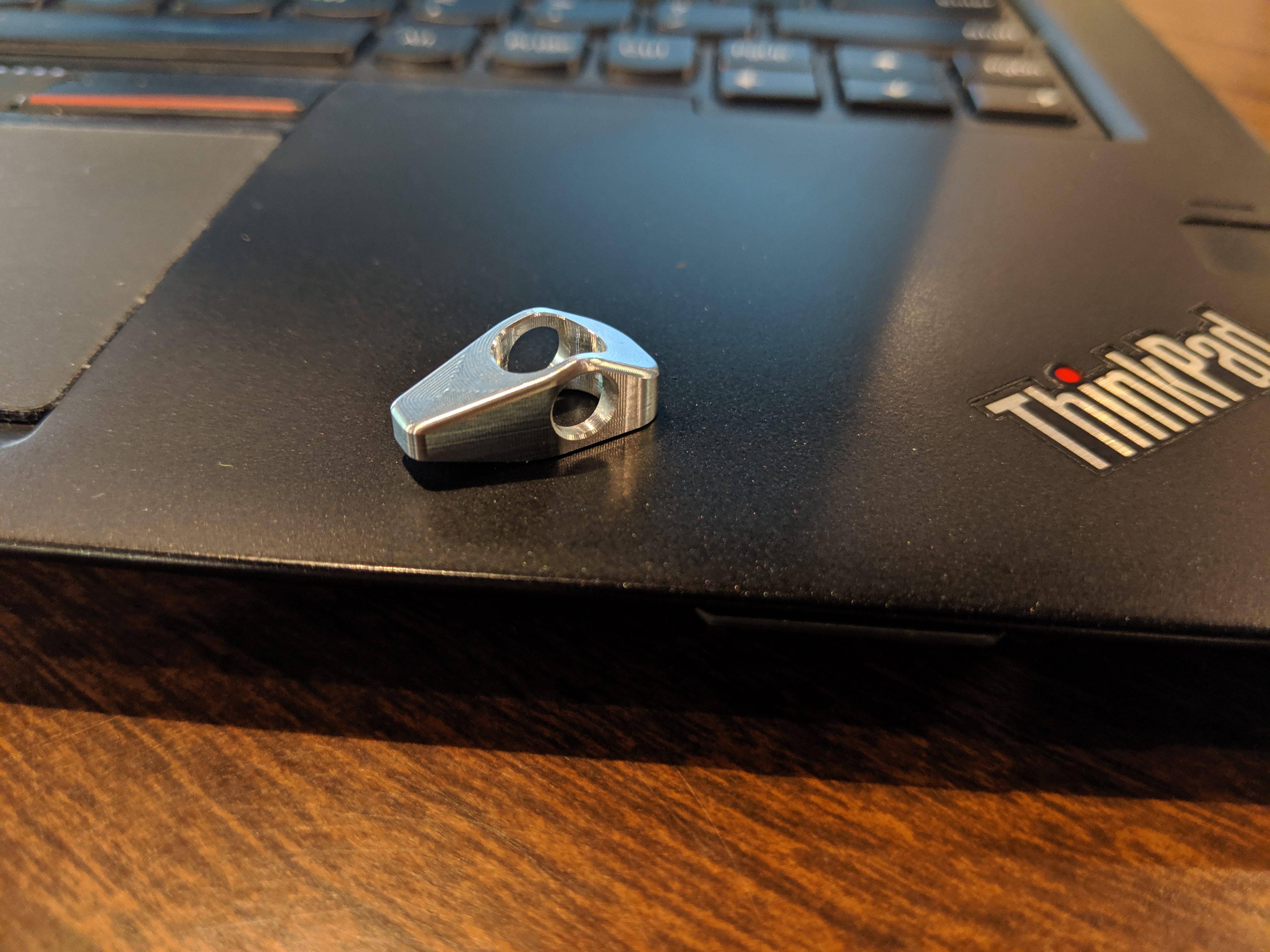 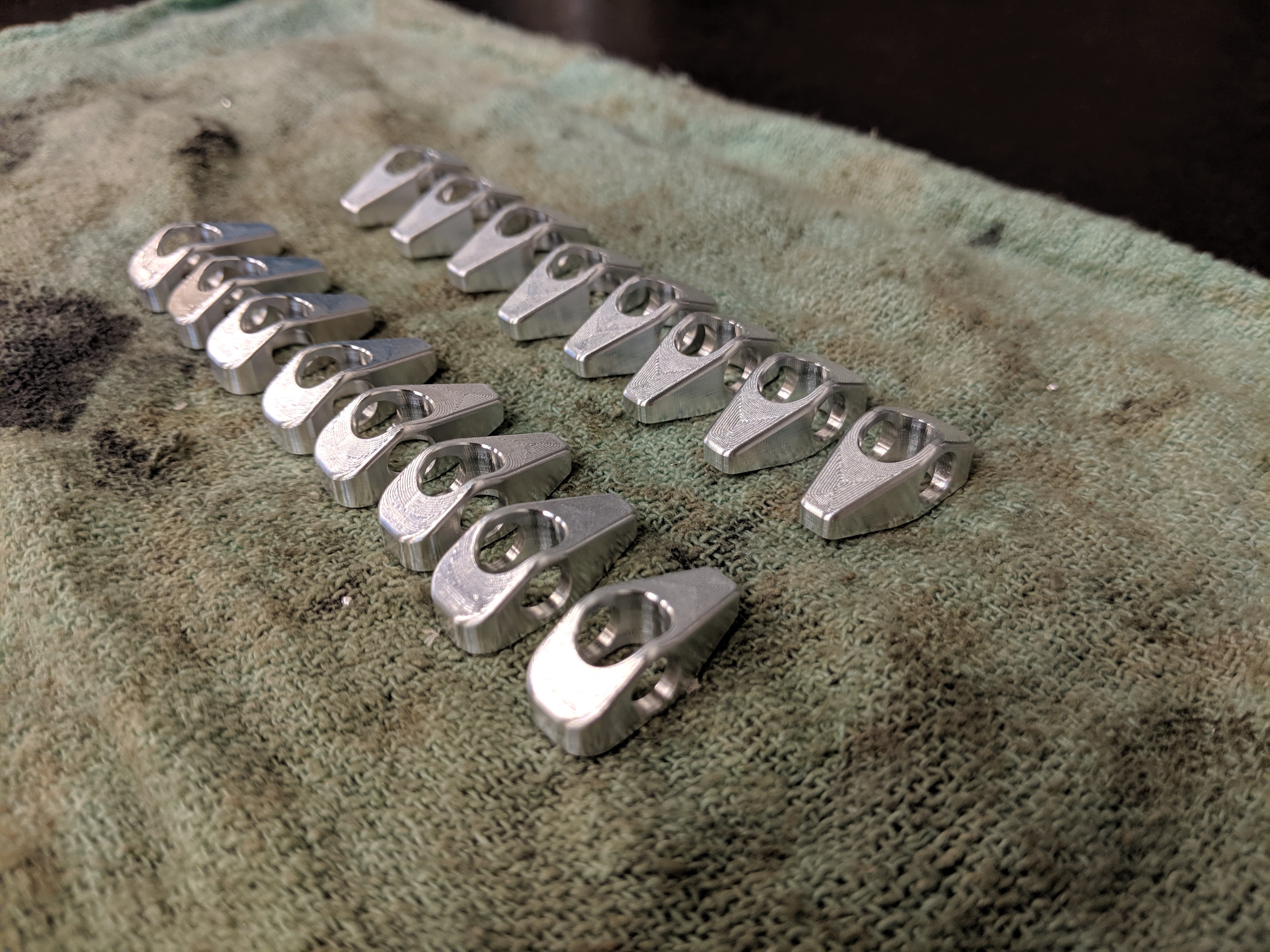 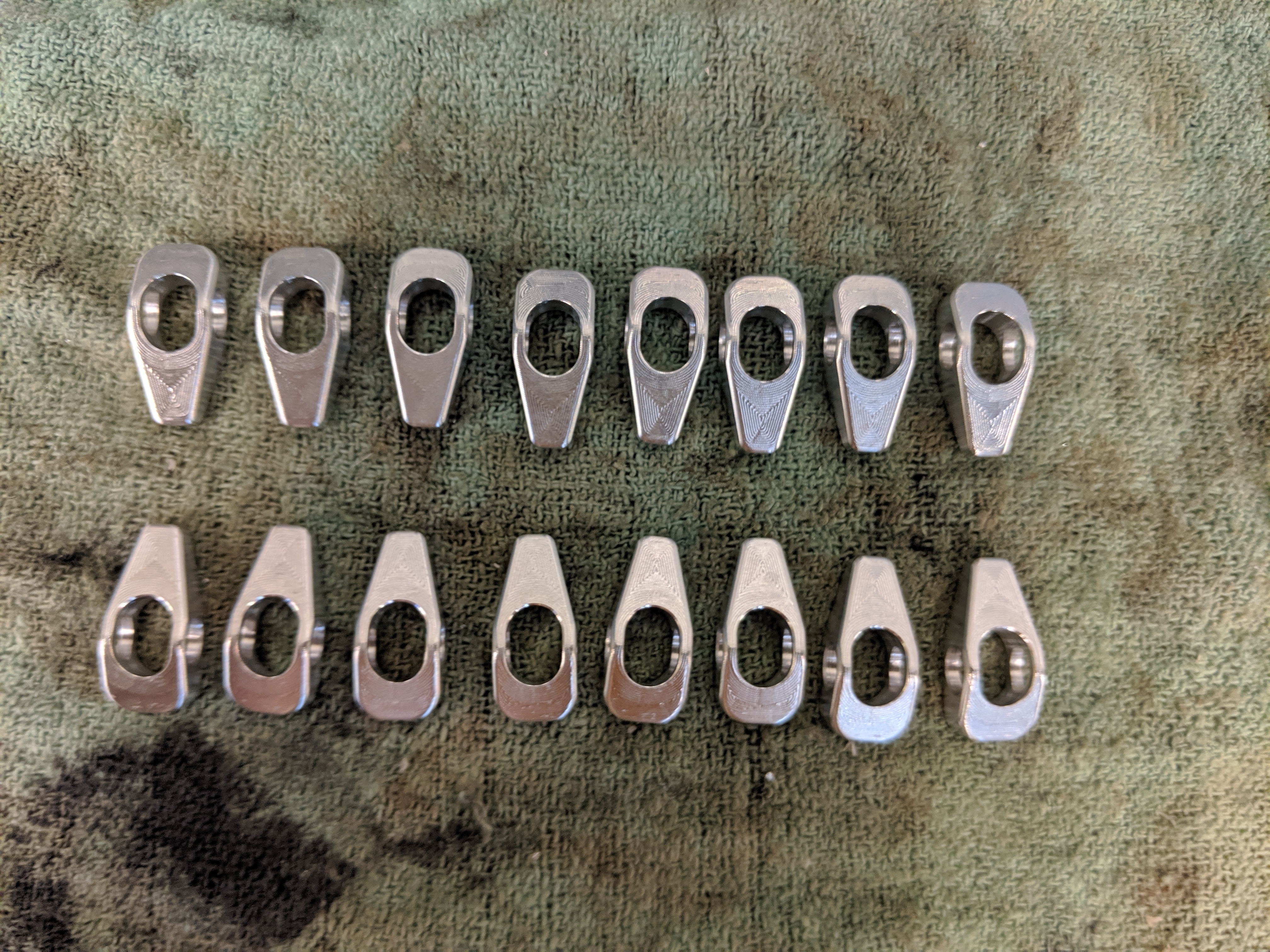 Now that I had gotten a start with using the 4th axis, I decided to tackle the connecting rod caps. These were made using 3/4" aluminum bar stock. This time I managed to nearly part it off on the mill, leaving just a thin skin of aluminum that I could break off and clean up and buff off. While I'm happy with the final result, I spent most of the day fighting chatter. Hopefully I can finish the rest tomorrow now that I have a recipe that seems to work. 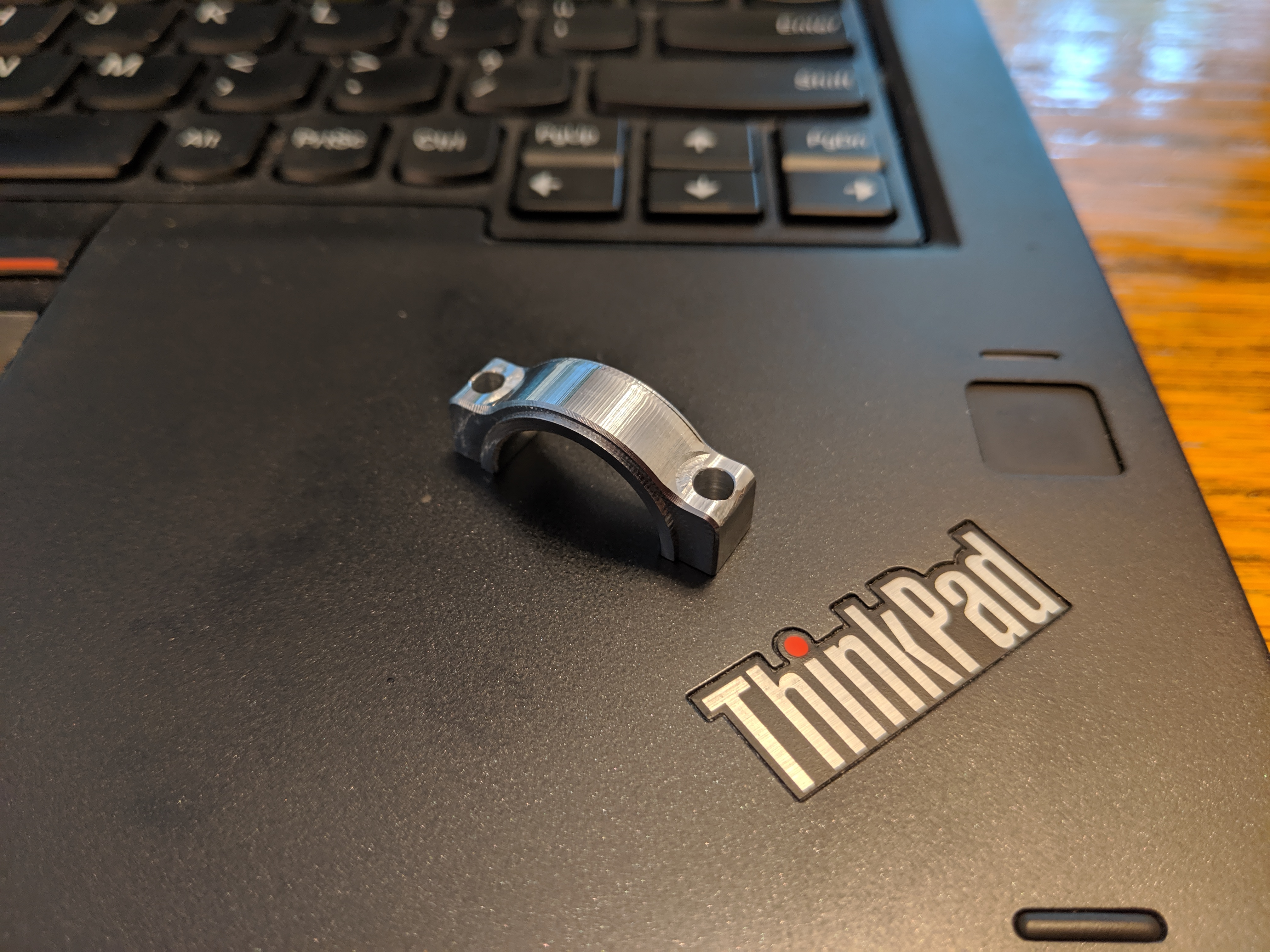 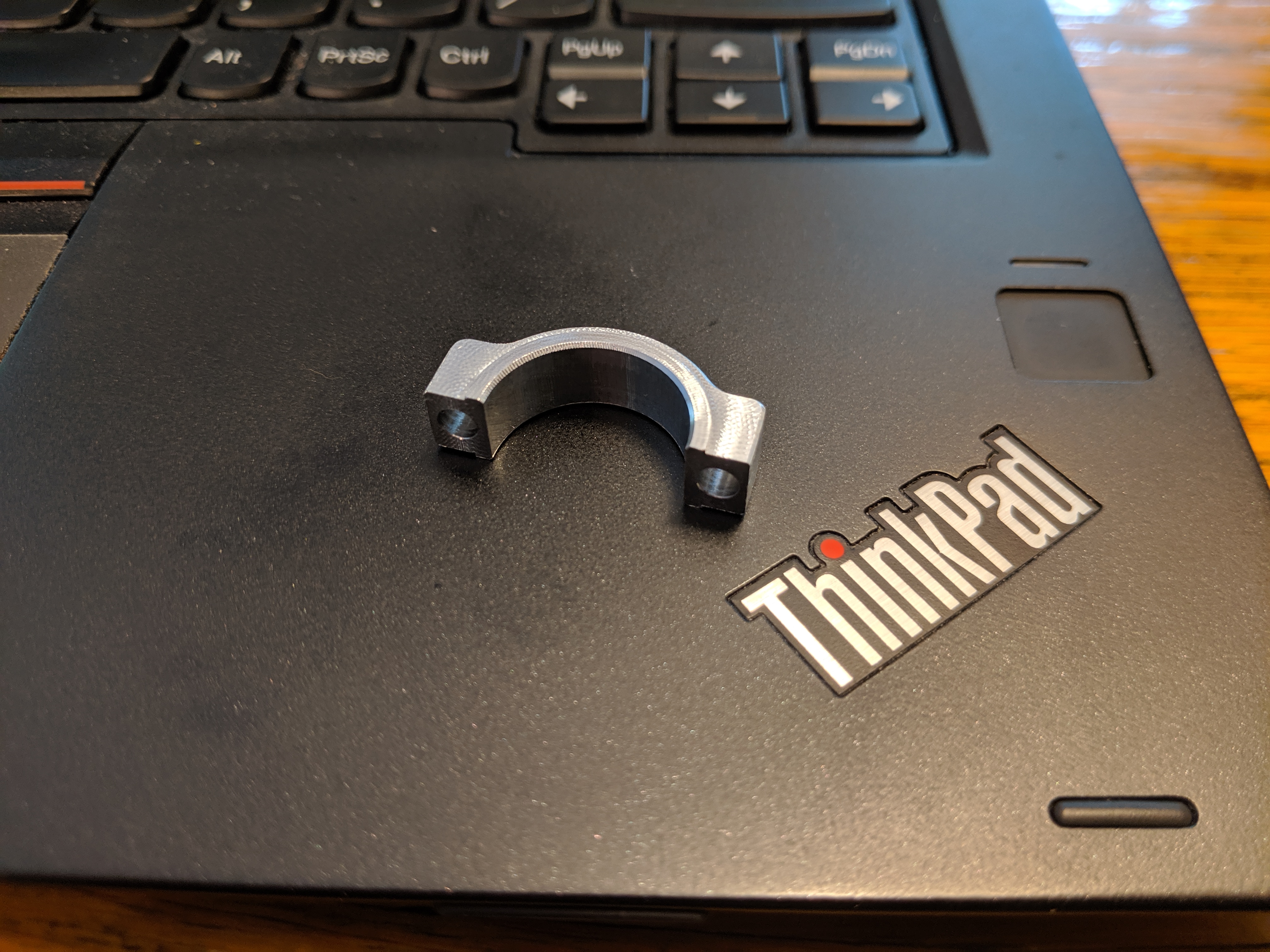 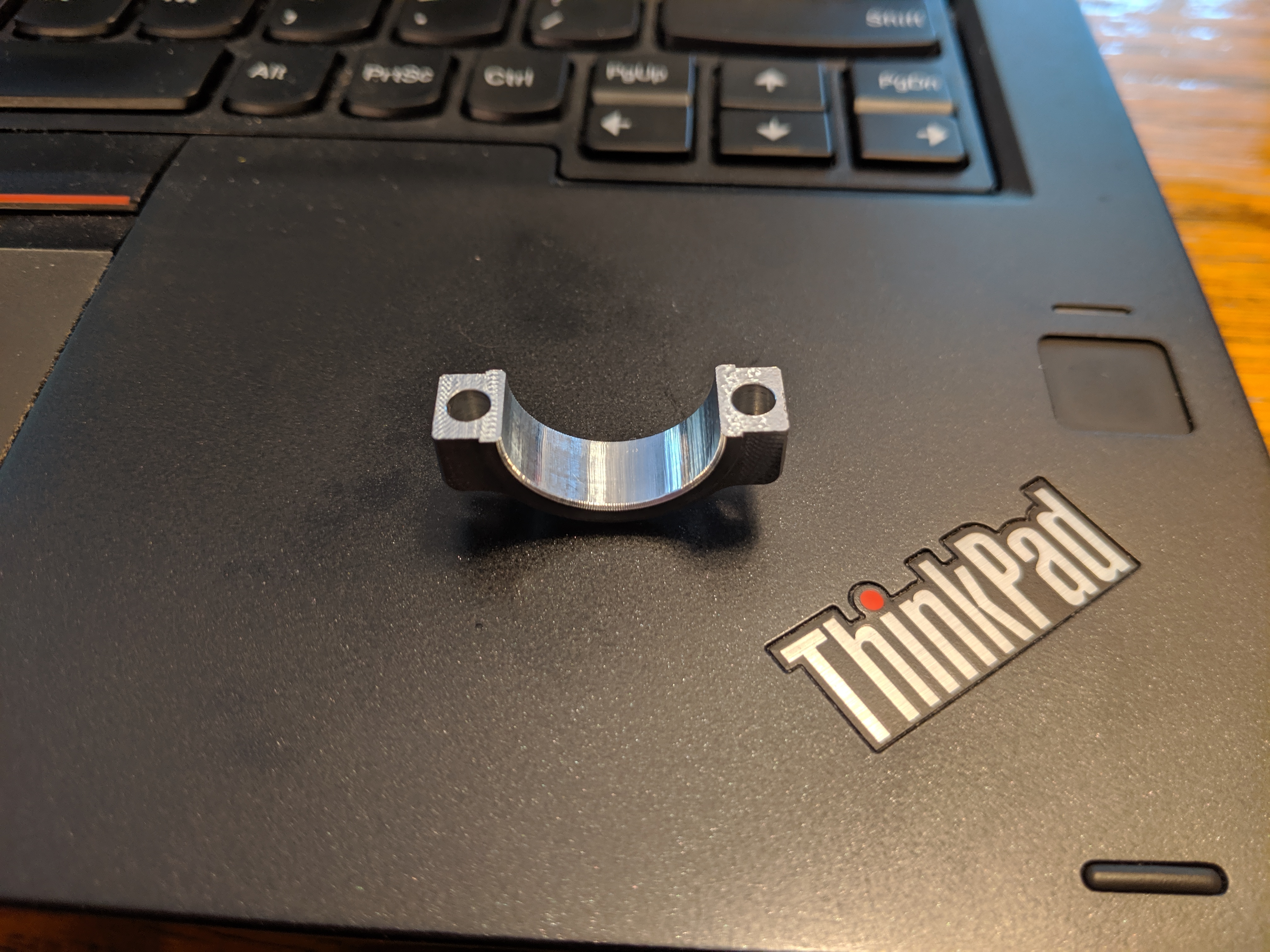 I made more chips today. All of the connecting rod caps are finished. 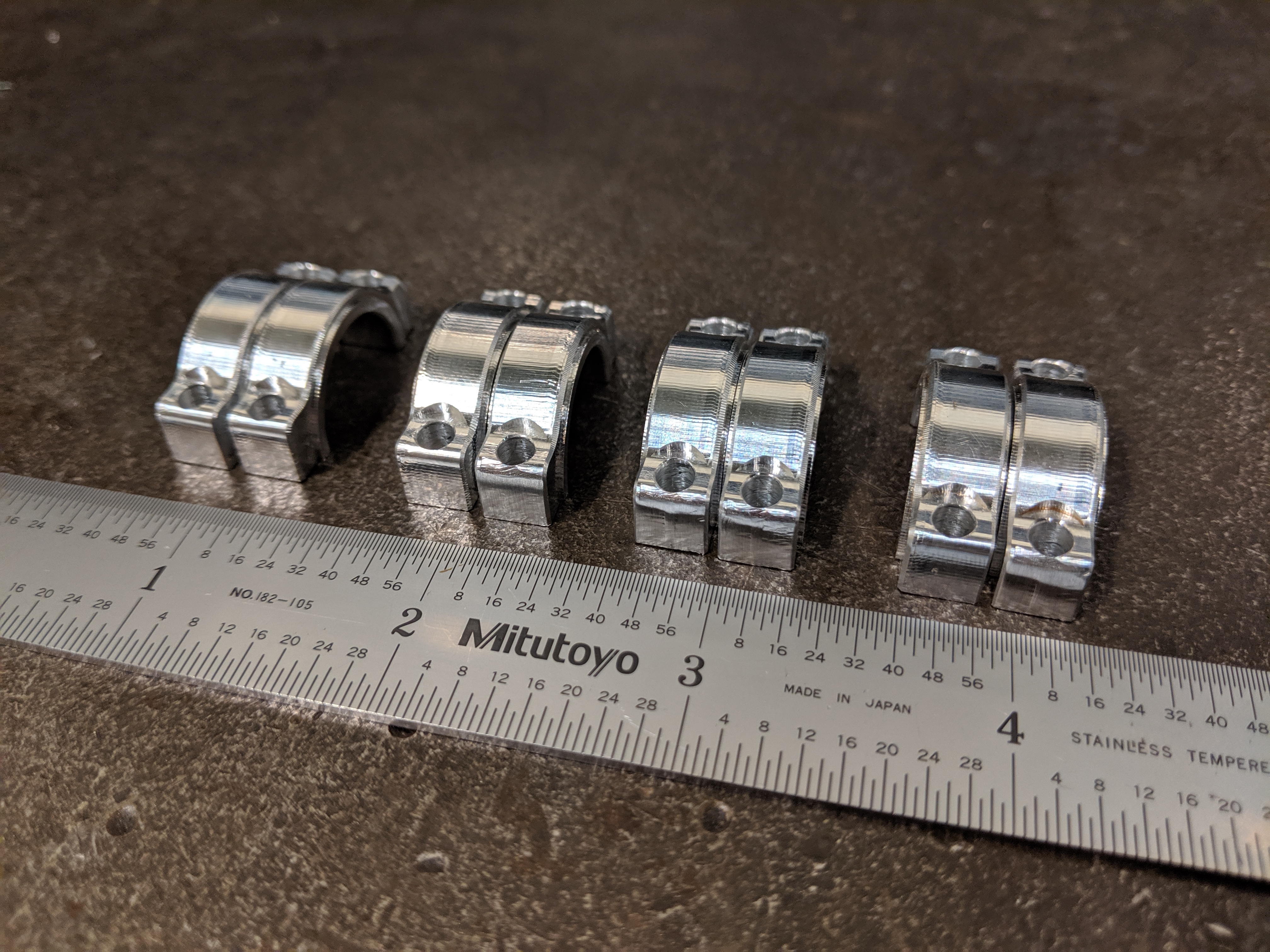 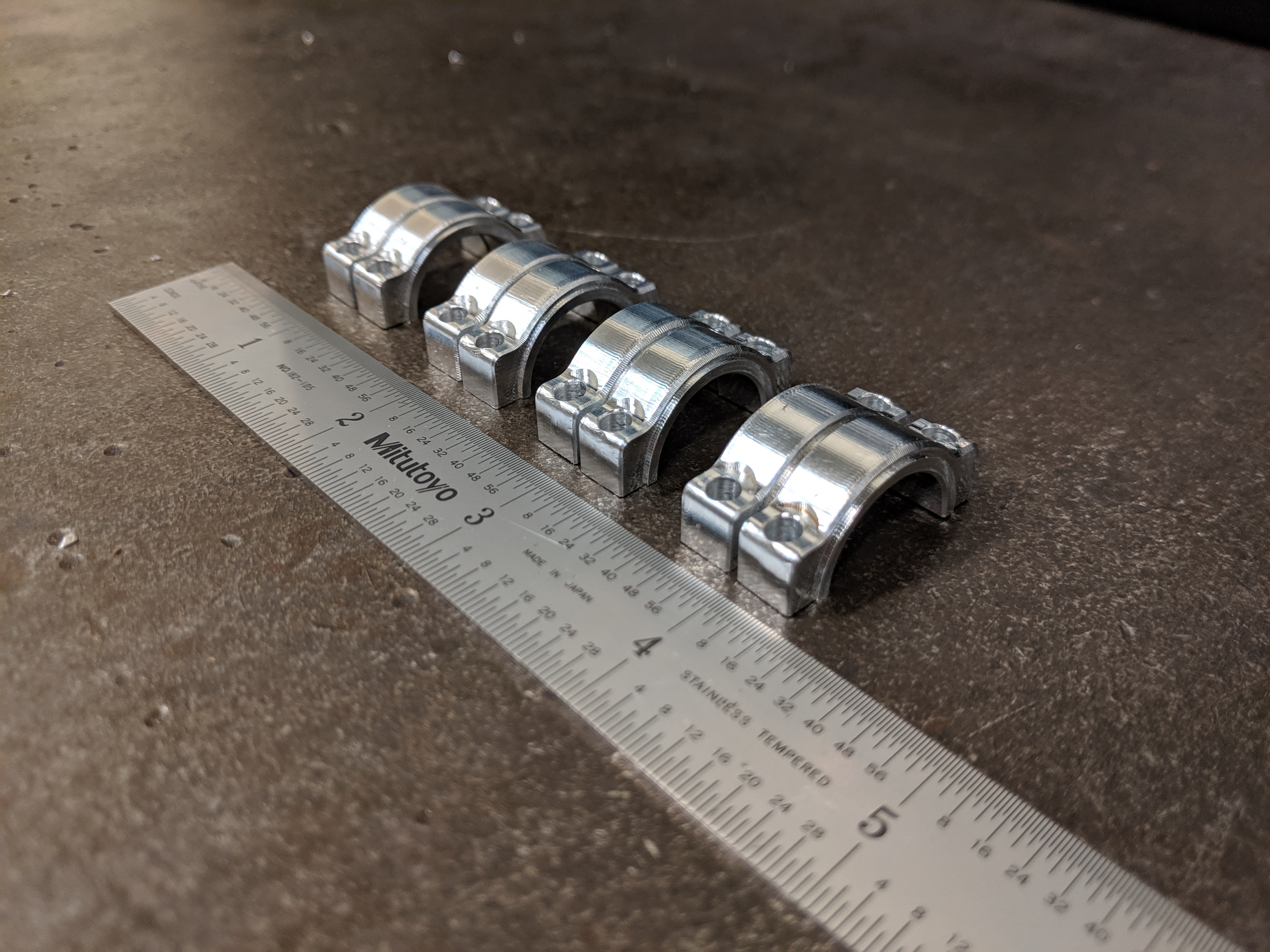 With any luck, work on the block will begin Monday. LOTS of programming to do this weekend...
K

Nice work. That's an interesting and challenging project. Please keep us up to date on your progress.

I spent most of the day yesterday getting the CAM work done for the engine block. Estimated machining time at 100% rapids is only 4 hours 46 minutes... If I'm lucky on Monday I'll get all of the tooling setup and the dry run finished. 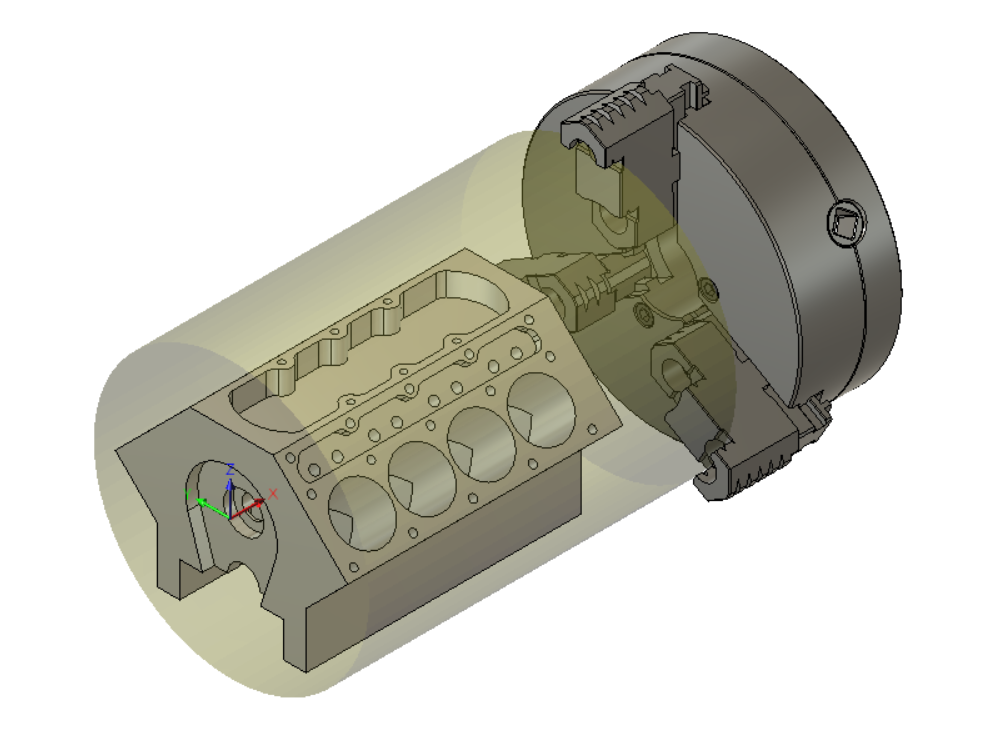 Since I'll be making the crankshaft on a manual lathe I wanted to have a physical model of the crankshaft for verification when changing setups. I'd really hate for Mr. Bozo to come and pay me a visit on the last setup. With some scraps of 1/4" plywood and some dowel stock I mocked up the crankshaft. It's not 100% dimensionally accurate, but the necessary geometry is correct. 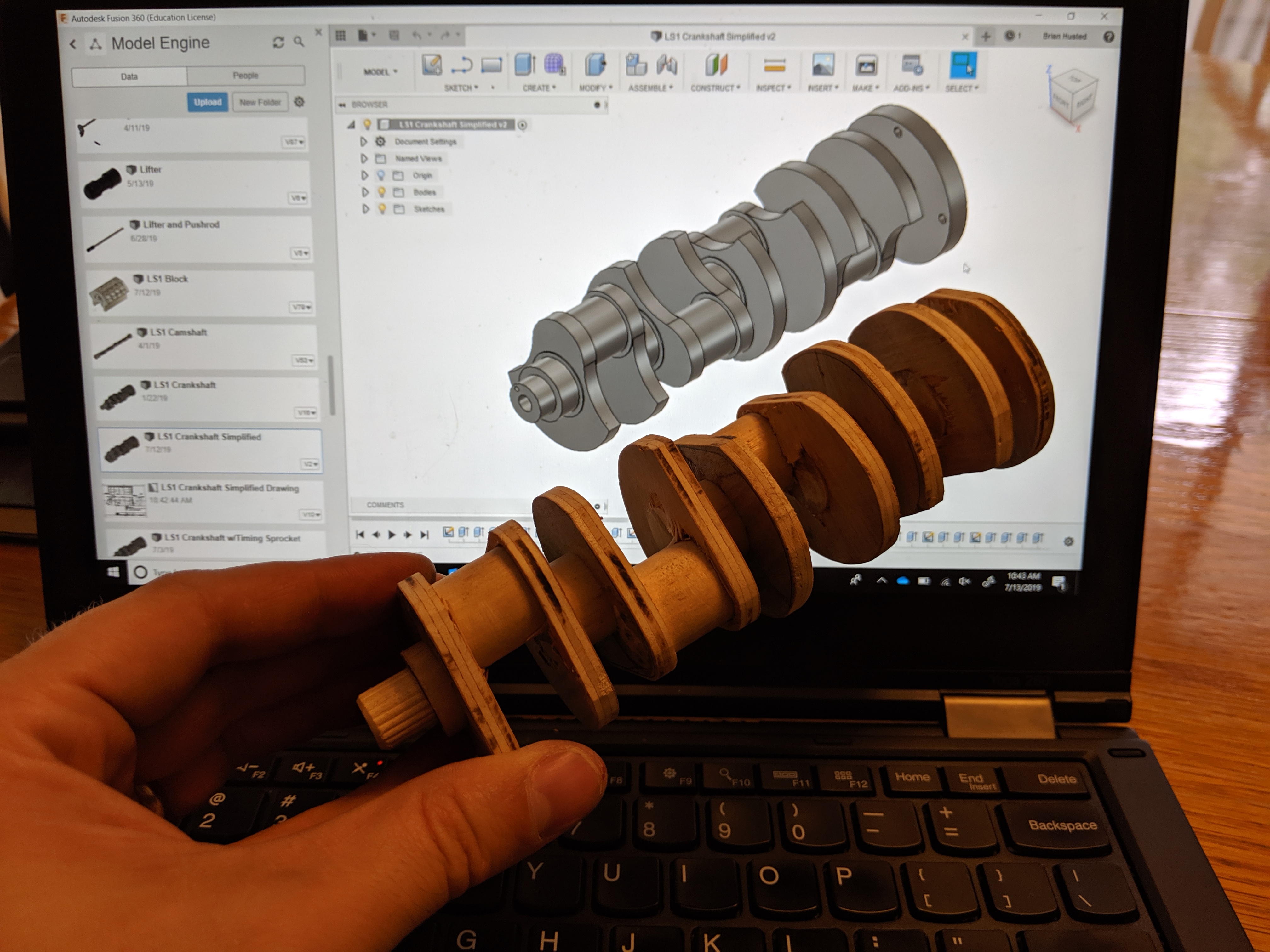 What materials do people prefer to use for model engine crankshafts? As I said before, this is not intended as a running model, so forces will be much lower. I'm looking for something that will machine well, but perhaps not develop surface rust. My instructor suggested using stainless. I've seen a couple of builds here that suggest using stressproof.

1144 is my go to crankshaft material. It machines real nice and won't move around on you as much as other metals. Nothing worse than machining a 20 hour part and finding .007 runout when complete.

Why do you CNC guy's start with round stock. If you started with a piece of square in a 4 jaw chuck wouldn't you reduce the amount of material to be removed by half? Wouldn't that reduce the machining time by a bunch?

5C collets for square stock are readily available. I have a few different sizes of them, and a few hex sizes as well.
B

I've never seen square 5C collets before. The school I'm at does have a few hex ones, but that wouldn't have helped me.

Another thing I thought of is that if I had started with square stock for the rockers or rod caps, I'd also have to dial in the A-axis position for the program. I'm not a machinist, just a student/hobbiest learning as I go.
I

do they make 5C collets that will hold 3 in x 3 in material?
Ron

I know the piece is way too big for a collet. I was thinking 4 jaw chuck. Not a big deal to use around, I was just curious.
Let the build continue!
B

Progress was made today, though not as much as I would have liked. I actually looked and the school doesn't have a 4 jaw that fits the 4th axis. It's not the same spindle mount as the other D1 chucks they have. After my experience today I wish I had square stock big enough and a 4 jaw to hold it. First I setup all 16 tools required for the block operations. Then I cut the biggest piece of metal that I've ever worked with. That's a 6" ruler for scale... 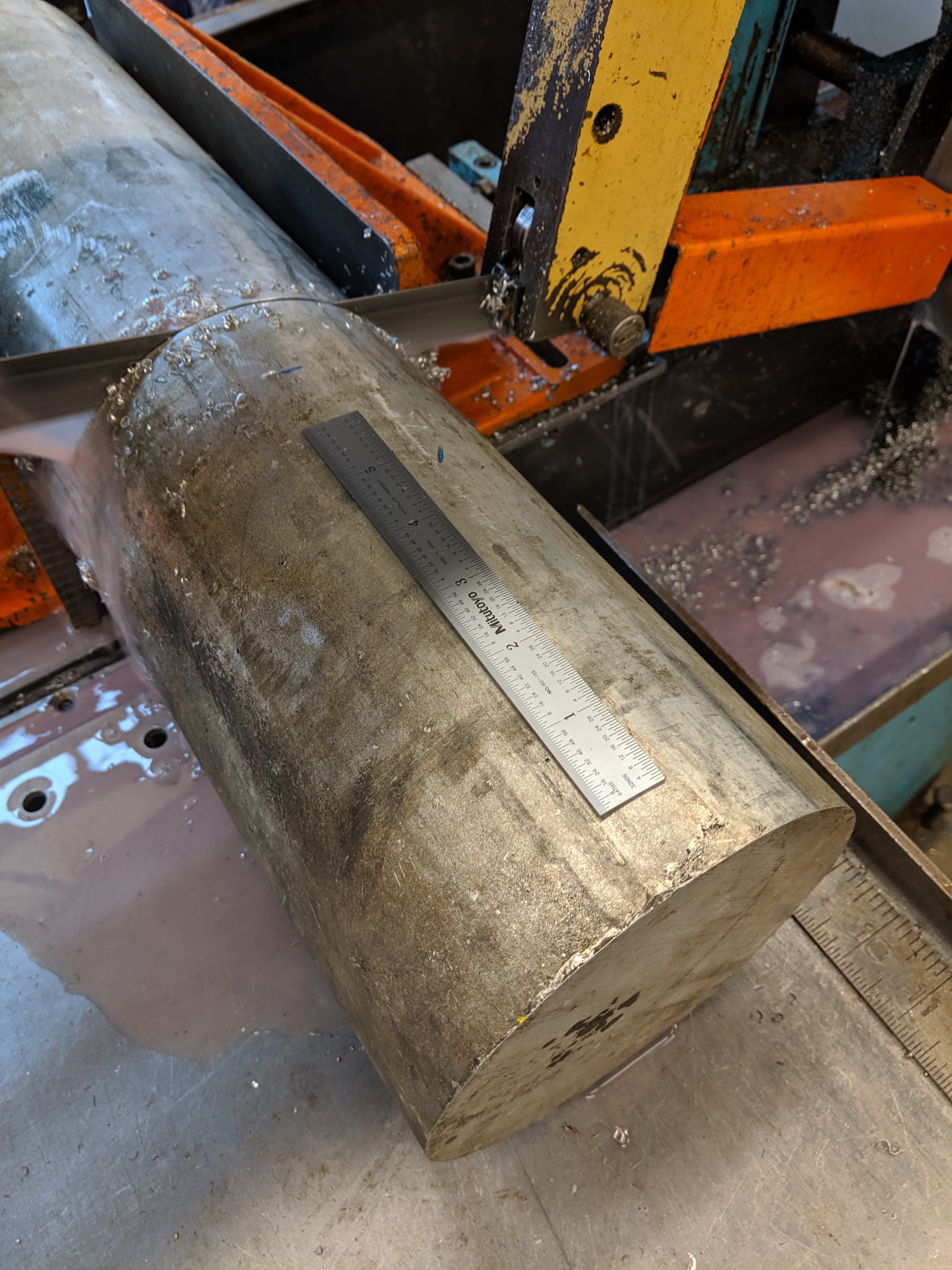 Since I had to flip the jaws around, the stock was only held by ~1/2" of the jaw. They don't have a tailstock for the 4th axis on this machine, so I had to get creative. There is a tombstone that can be mounted instead of the chuck that has a tail support with a plastic bushing. I stole the support and decided to turn a pin on the end of my stock to fit the bushing. 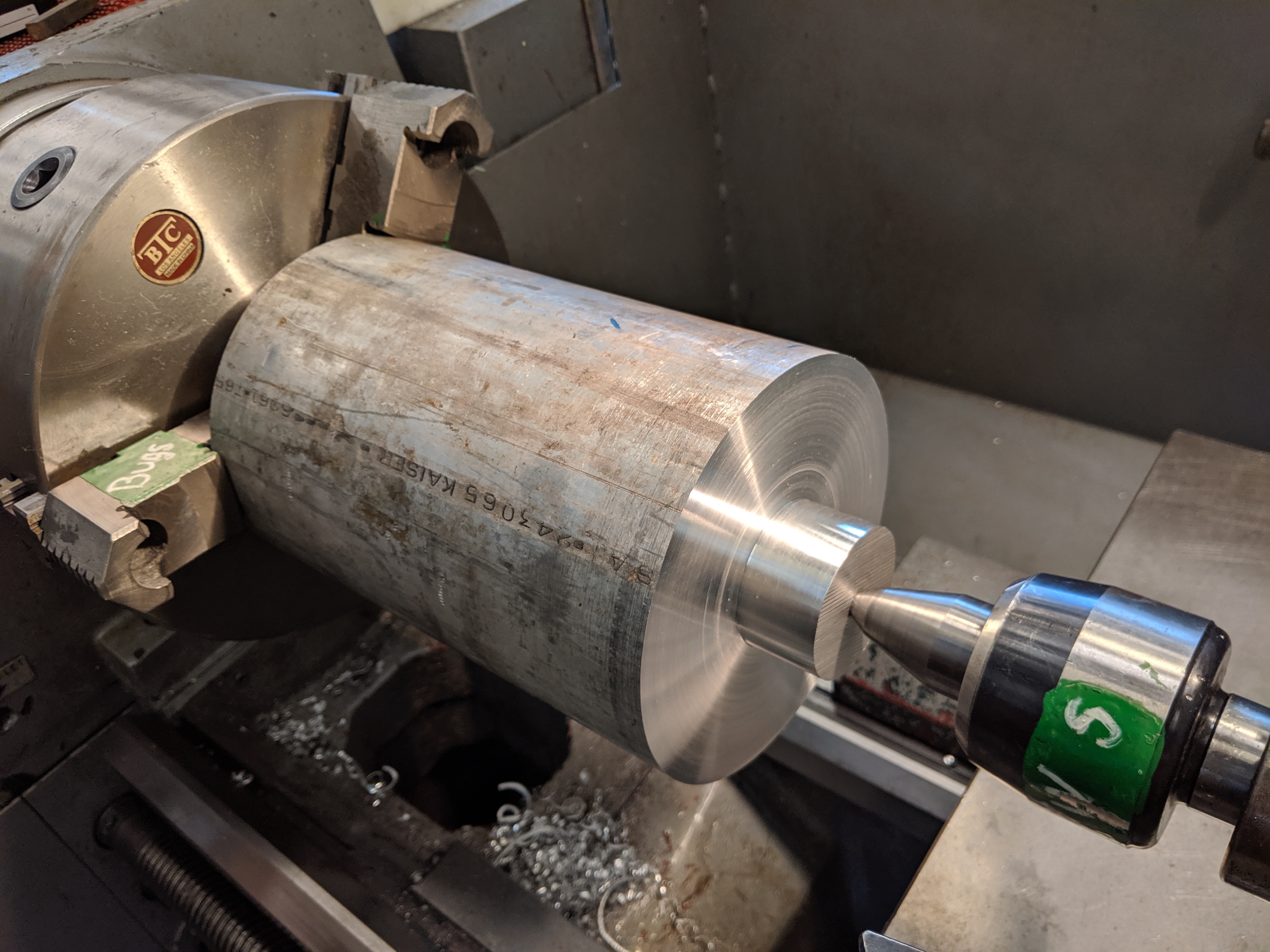 Then it was a matter of getting things dialed in on the machine to get rid of the run-out. I was pretty proud of myself until I realized that on the bottom roughing operations, the cutter and the tail support were going to share the same space...

Barring allowing the tool and the tail support to become intimately acquainted, I've come up with a couple of workable solutions.
a) Rework the toolpaths so that I avoid the collision.
b) Remove the plastic bushing and turn a dead-center that fits in the support housing.
c) Turn the face back farther so that the pin is longer and don't have it all of the way into the tail support.
Last edited: Jul 15, 2019
B

Progress has been made. The first thing I'll need to do tomorrow morning when I start up the machine is to clean it out with a shovel. Boy did we make some chips today. As for solving the problem I was having, I went with a little bit of solution A mixed with the proper amount of C. I did a dry run and got the clearance I needed. We hit the green button and did some roughing. 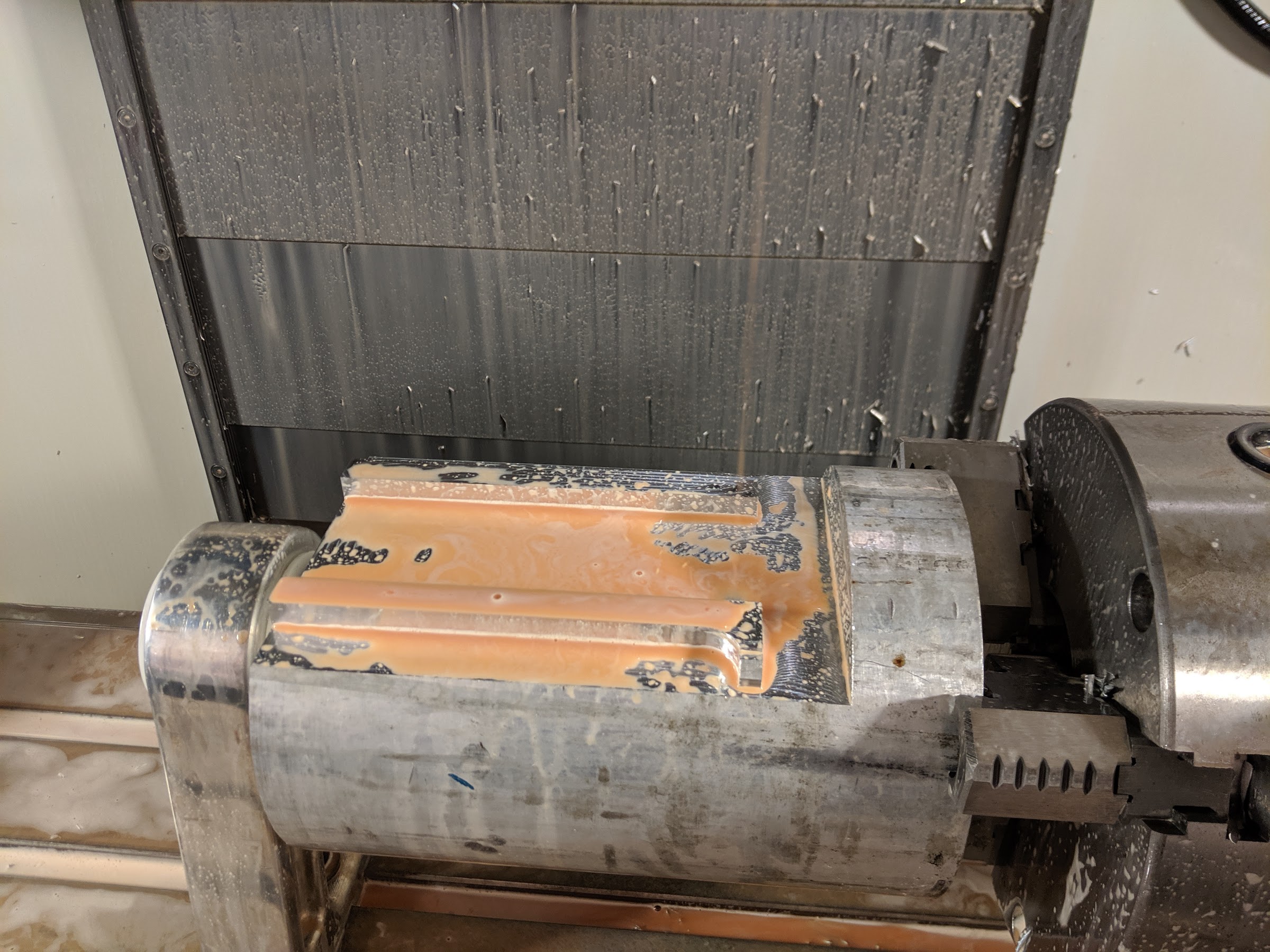 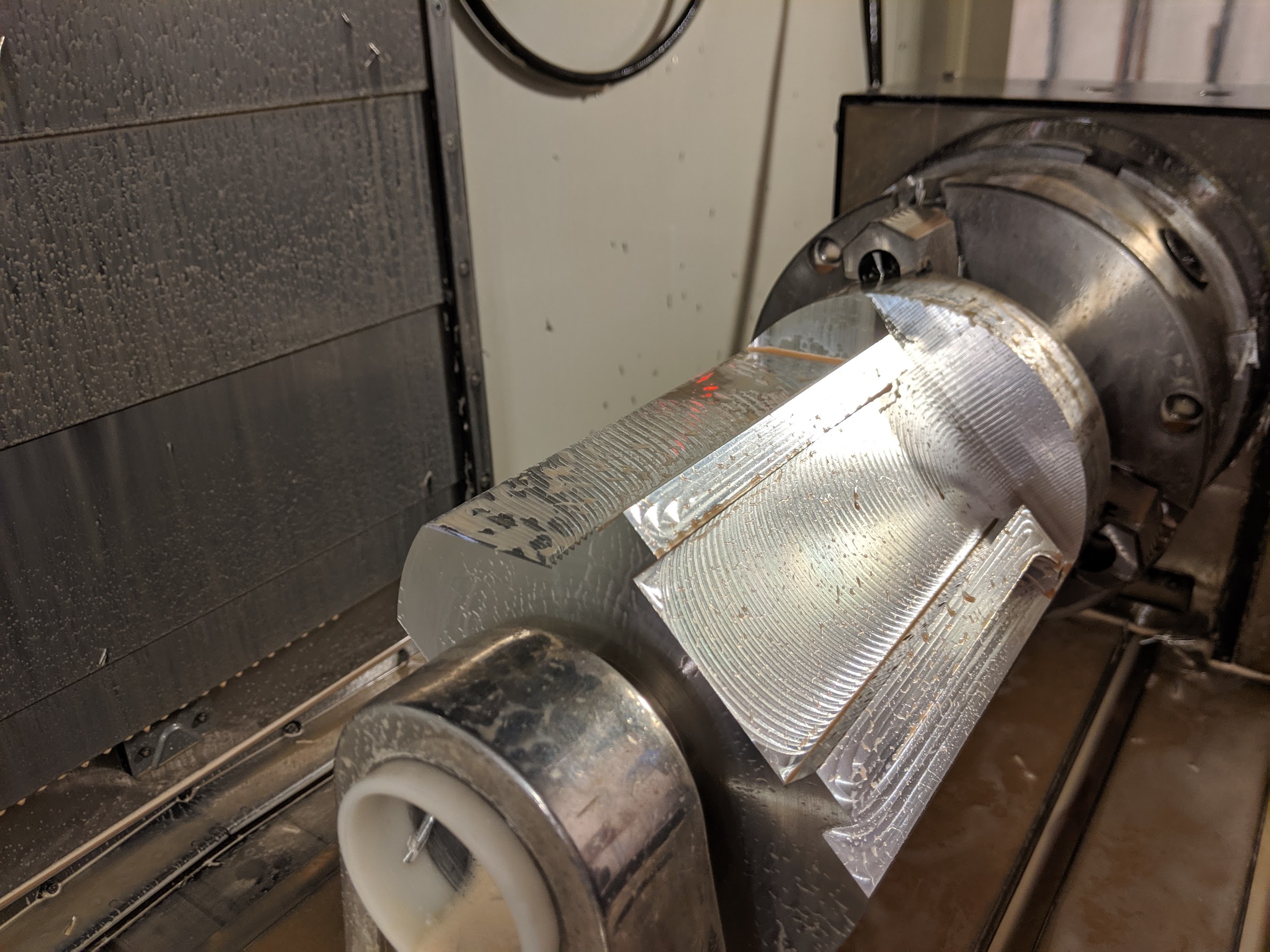 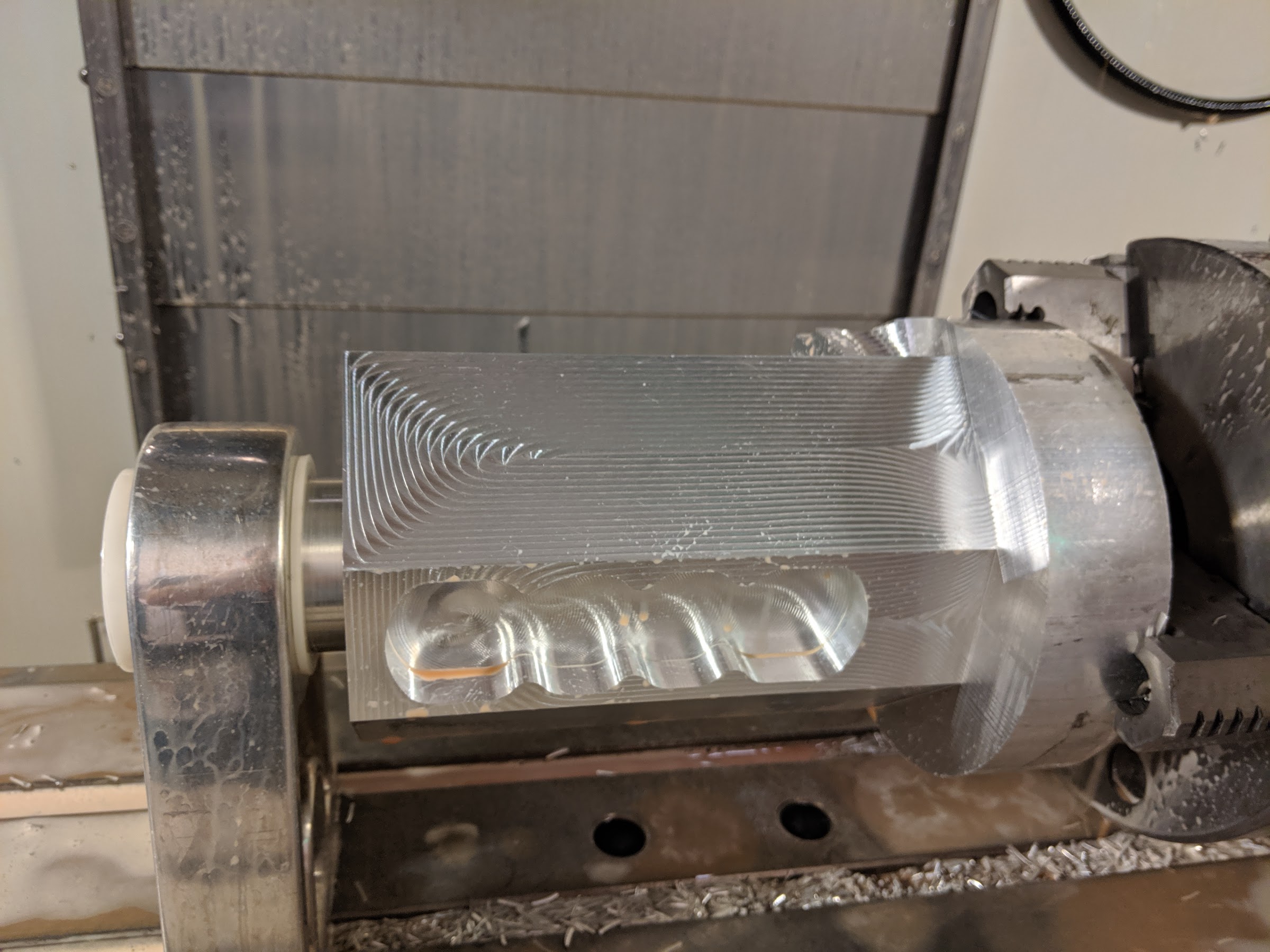 Spot drilling a bunch of holes before getting out the other drills. I did make a mistake here and got my drilling sequence out of order. I was drilling holes in the crankcase to make it easier to get the endmill down there for clearing out the pockets. I forgot and drilled one of the holes for the cylinder bores first and lost my flat to start the drill on for the crankcase. Not a big deal, just a little more time spent on that pocket helixing downward. 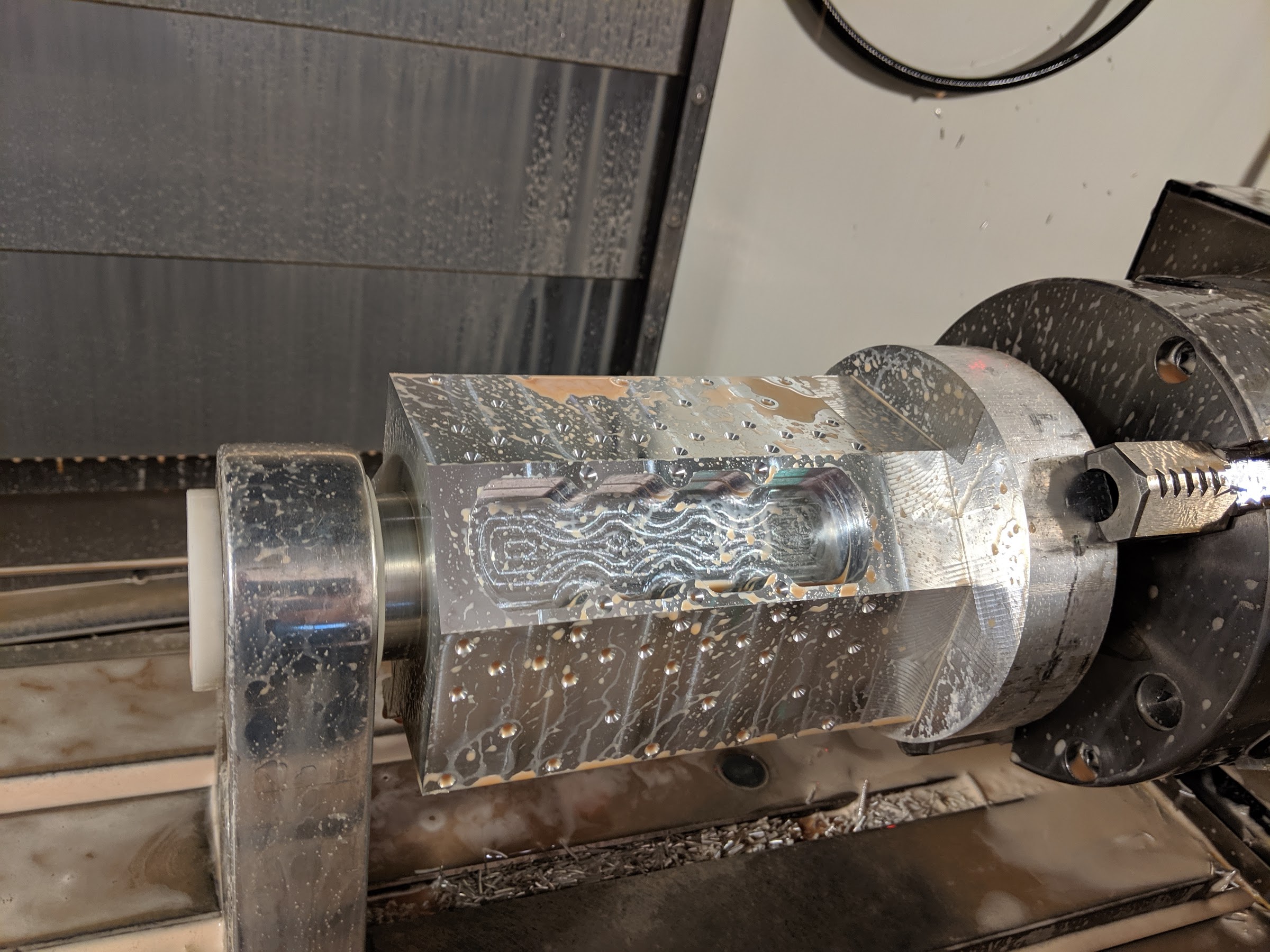 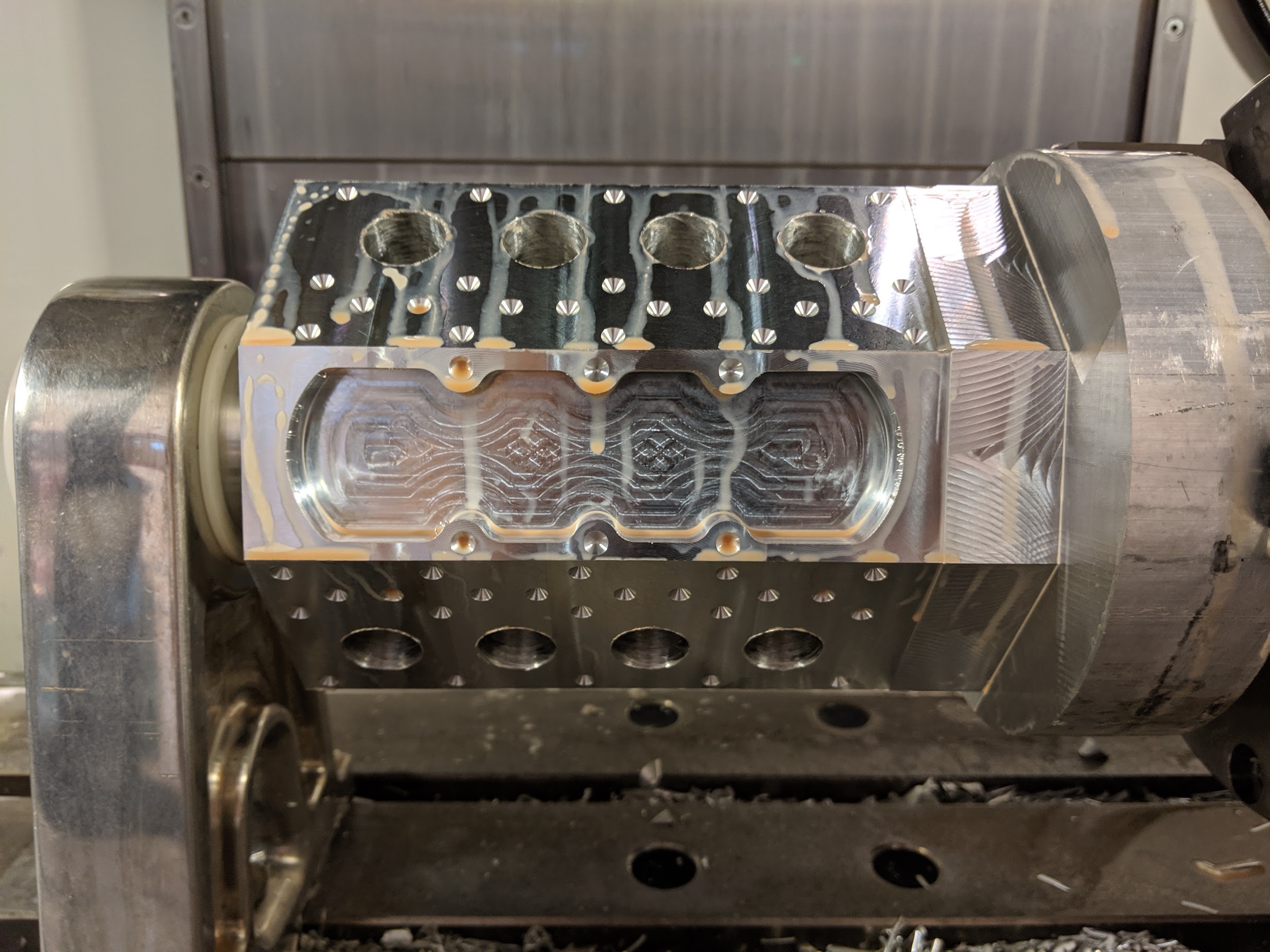 This is where I had to quit for the day. Tomorrow I'll be drilling and tapping the rest of the holes on the block, boring out the cylinders, and finishing the crankcase. I tried to take some video of the cutting action today, but between the flood coolant and focusing on the running the machine, I didn't have much time. I got a couple of clips on my phone that I'll share if it looks like you can see anything.

You are making good progress, looks like good stuff I'll be watching this post - as it is not intended to be a runner, have to though about making it a partial cutaway so the crank and a piston can be seen in motion, it seems like a shame to hide all of the CNC machining inside the engine where it can't be seen.
You must log in or register to reply here.