after finishing the two Boll Aero 18s and a workshop covered in castor oil and several scars and cuts on my fingers, it's finally time to get going on my next engine. After a few recommendations I have decided to go for the Nalon Viper 2.5 using plans from the Motor Boys crew at modelenginenews.org.

Im spending a bit pf time up front modelling the plans out in CAD and doing the imperial to metric conversions there to make sure everything checks out and just 'getting my head around' making the parts and how things should fit. This engine is actually way more sophisticated than anything I've attempted before so I'm slightly daunted and excited at the same time. Looking forward to making some swarf and at the same time realistic that my scrap bucket might also see some additions. 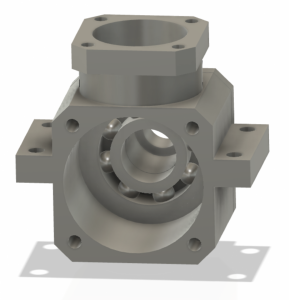 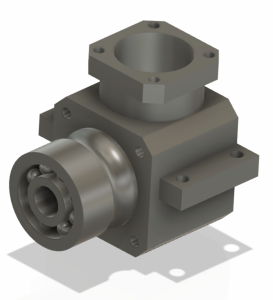 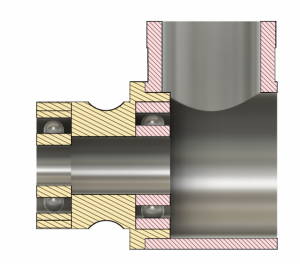 They say the journey of a 1000 miles begins with a single step well I guess that is the purchase of some bearings! 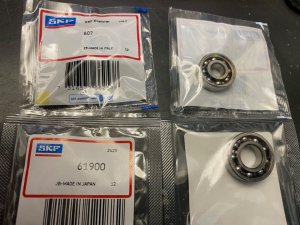 Anyway the question I have for some people out there far more knowledgable in such matters than I am is per the picture below. Do I need to provide a bit of relief to ensure that the inner ring of the bearings doesn't rub on the crank web or the bearing seat or can I implement the plans exactly as drawn. I have crudely scribbled the areas on the plan where I think there may be interference below and would really appreciate a steer on whether this could cause issues/needs a bit of machining so nothing touches the inner ring. I have studied a bunch of plans and photos and it **looks** like there is no issue and the bearing seats can just be flat but wanted to ask the forum to see is there is a 'proper way' of doing this.

Also in the axial dimension, I assume the front split cone rides on the inner ring and pulls the inner rings and crank shaft tight against each other so they rotate together and cant slip on the shaft.

Thanks all in advance. 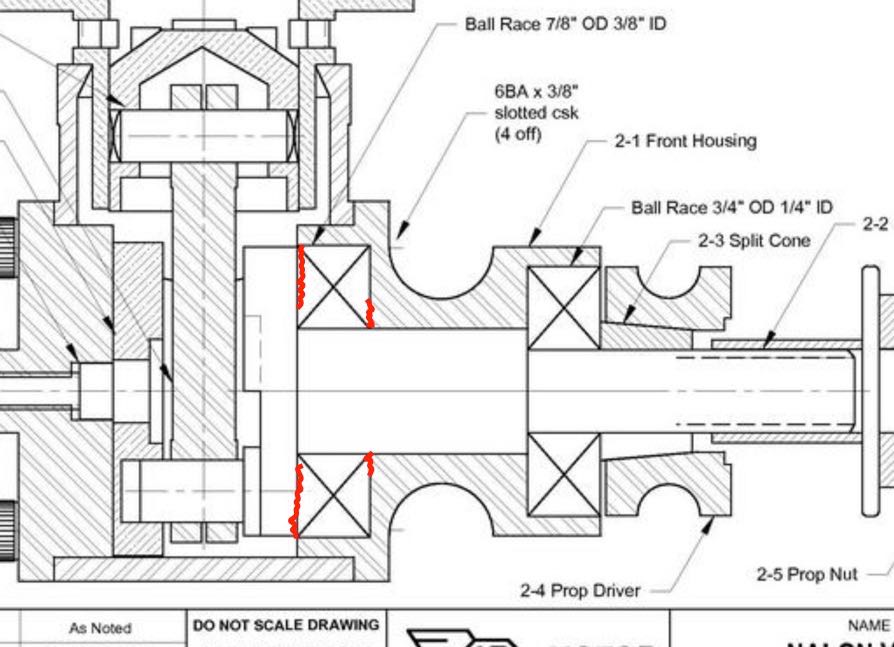 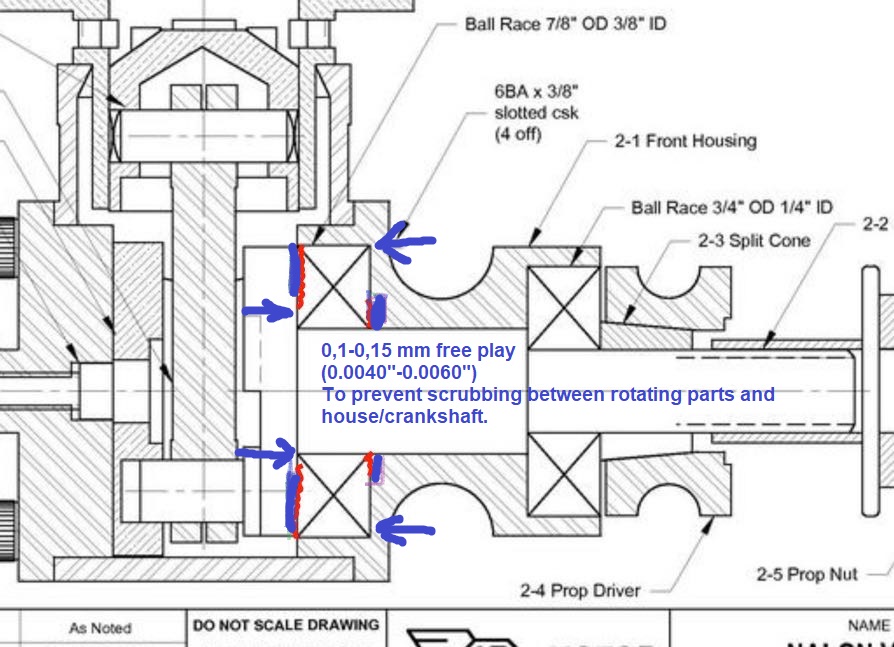 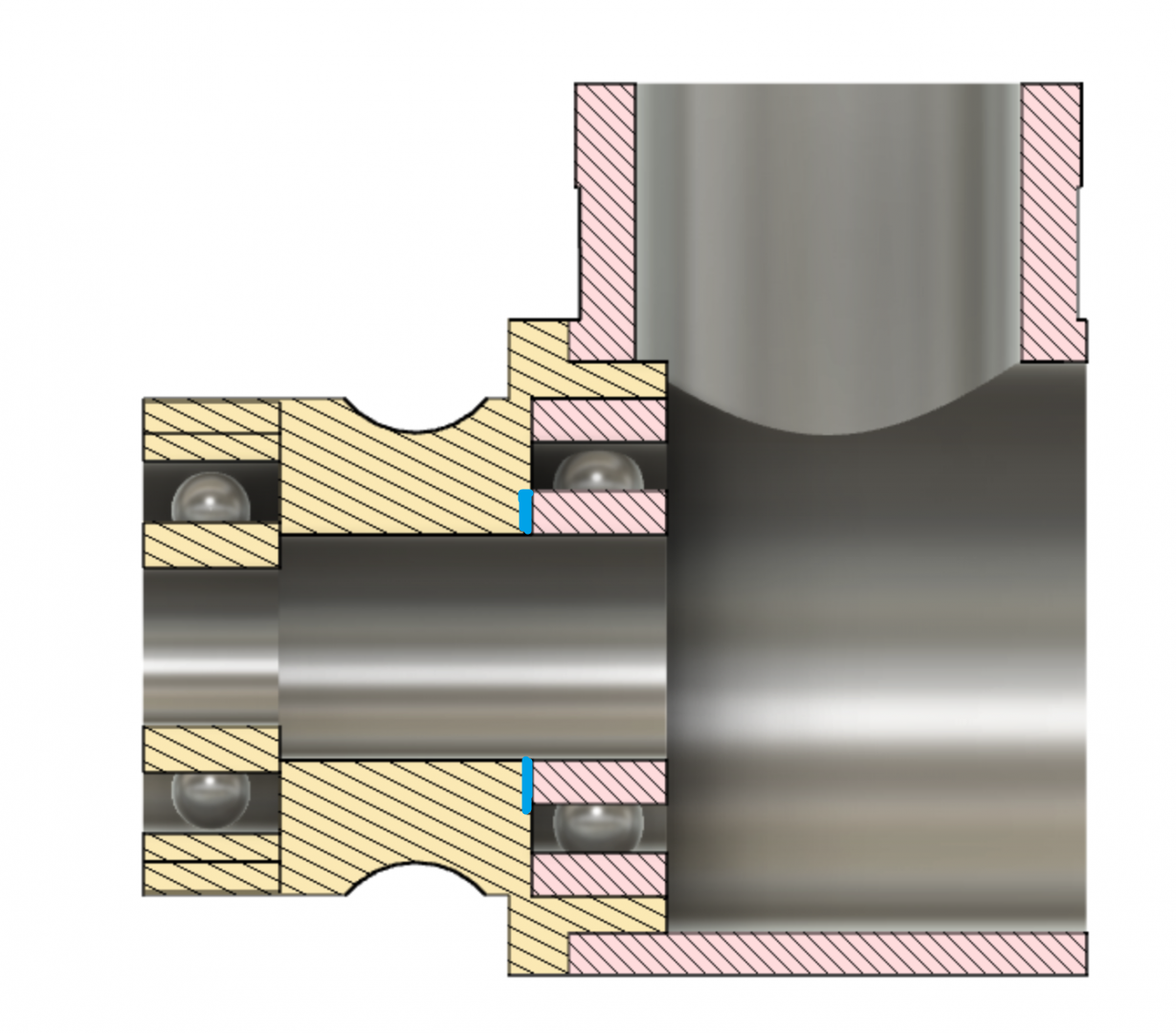 Thanks Jens. That's exactly what I thought! Patrick

Whilst a double ball race front end should have clearance it should not physically 'float' as such - that would mean the rear bearing is to loose on the shaft or too loose in it's housing.

It's best to have a small raised area in front of the web to sit against the inner race - no more than 0.1-0.15 and about the same diameter as the inner to give clearance on the rest of the web on the outer bearing. As Jens says when the front race is pulled up against the step on the crankshaft there should be about the same amount of 'free play' but of course if the fit is correct on the rear bearing you should not be able to move the crankshaft this amount by hand. i.e. Once the rear bearing is seated firmly in its housing with the shaft up close tightening the prop should not apply any pressure to the rear face of the front bearing housing but to the step on the crankshaft. If dimensions are a little tight and it does, it's just a matter of easing that face a little.

Looking forwards to your build in coming days

Hi again, I'm having real computer problems at the moment and things are very slow to load.

Having posted I have just been able to see Jens drawing where he shows a slight relief for the inner race on the rear bearing. I don't recall doing this on any of the engines I've built so far but it will of course allow the race to load so it's probably advisable to do so.

This image may be of interest Patrick - the shafts from the last engines made. You can see the relief on the web and the drawing top right 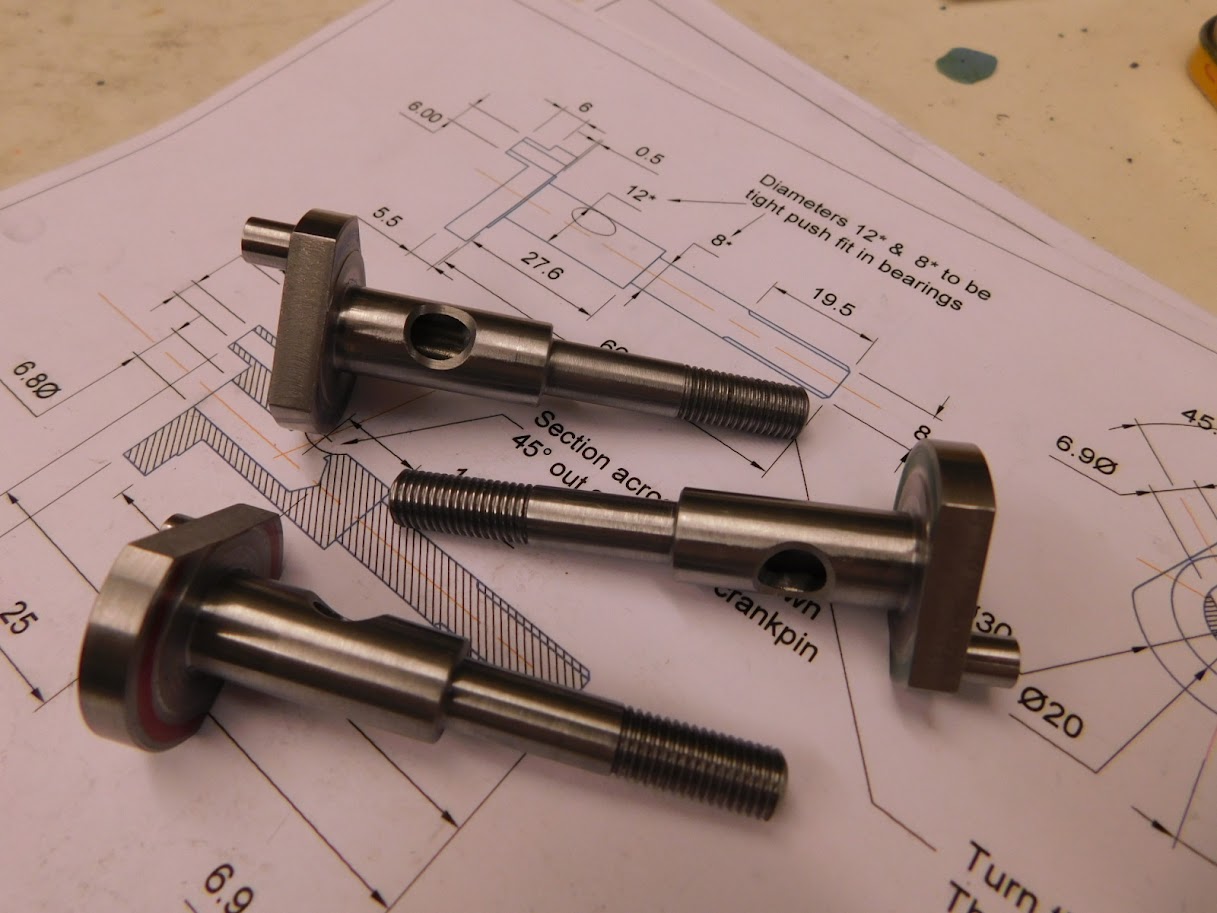 Ramon said:
This image may be of interest Patrick - the shafts from the last engines made. You can see the relief on the web and the drawing top right

Surely no such thing as a wrong engine

Patrick,
When Ron Chernich drew these out for MEN I believe he had an example of the original engine to guide him (or dimensions taken from one)

The drawings as such - particularly the GA are 'basic' in as much as no tolerance on moving parts are shown. Without checking the complete drawings I'm not certain if the due allowances are dimensioned on the individual parts. If not it's very much down to the builder to make the parts with the neccessary fits to suit their own preferences or from other guidance.

As you are aware this engine was originally intended for the Team Racing discipline of model flying and as such all efforts to maximise performance would have been made in the original. Attention to fits would have been paramount.

Take your time to get everything perfect

Ramon said:
As Jens says when the front race is pulled up against the step on the crankshaft there should be about the same amount of 'free play' but of course if the fit is correct on the rear bearing you should not be able to move the crankshaft this amount by hand..

I agree - the crankshaft is not 'pulled' as such other than by the propeller forces acting in one direction.

'End float' however could be mistrued as free movement which is not the case.

If the rear bearing is fully pressed home in it's housing there has to be a clearance at the front end of the shaft at the step on a two ballrace set up. When the propeller nut is tightened that would push the prop driver and split collet backwards against the bearing until the bearing hits the step on the crankshaft. There has to be some clearance behind that front bearing in it's housing otherwise binding will occur- which I think is what you are also saying

The fit of the front bearing in it's housing is usually of less tolerance ie tightness, than the rear fitting.This allows the bearing slight movement as the shaft expands/contracts with temperature variation which I assume you are referring to in your last sentence.

I think a general rule to go by is that when the two bearing are pushed against each other, by placing the shaft under tension by tightening the prop nut, no axial stress is put on the ball cages. The two inner races are located by shoulders on the shaft. In other words the outer races have some axial clearance so that are not clamped around the housing walls. In other words eliminate any axial load on the bearing.

When tightening the prop nut the action itself places no tension on the shaft itself. The collet is forced back to the bearing inner which in turn is forced back to the step on the crankshaft - it should have no influence on the rear bearing. Once this is in compression there should be a very small amount of clearance between the crankcase and the bearing inner of the front race.

Here's the GA drawing of my 5cc Oliver Tiger. It is drawn in the same manner as Patricks Nalon GA showing no tolerances. Each colour is a separate item/layer so when each in turn is taken to produce a working drawing for the part tolerances are then added as in the previous drawing posted. I can't find an image at the moment to show this. 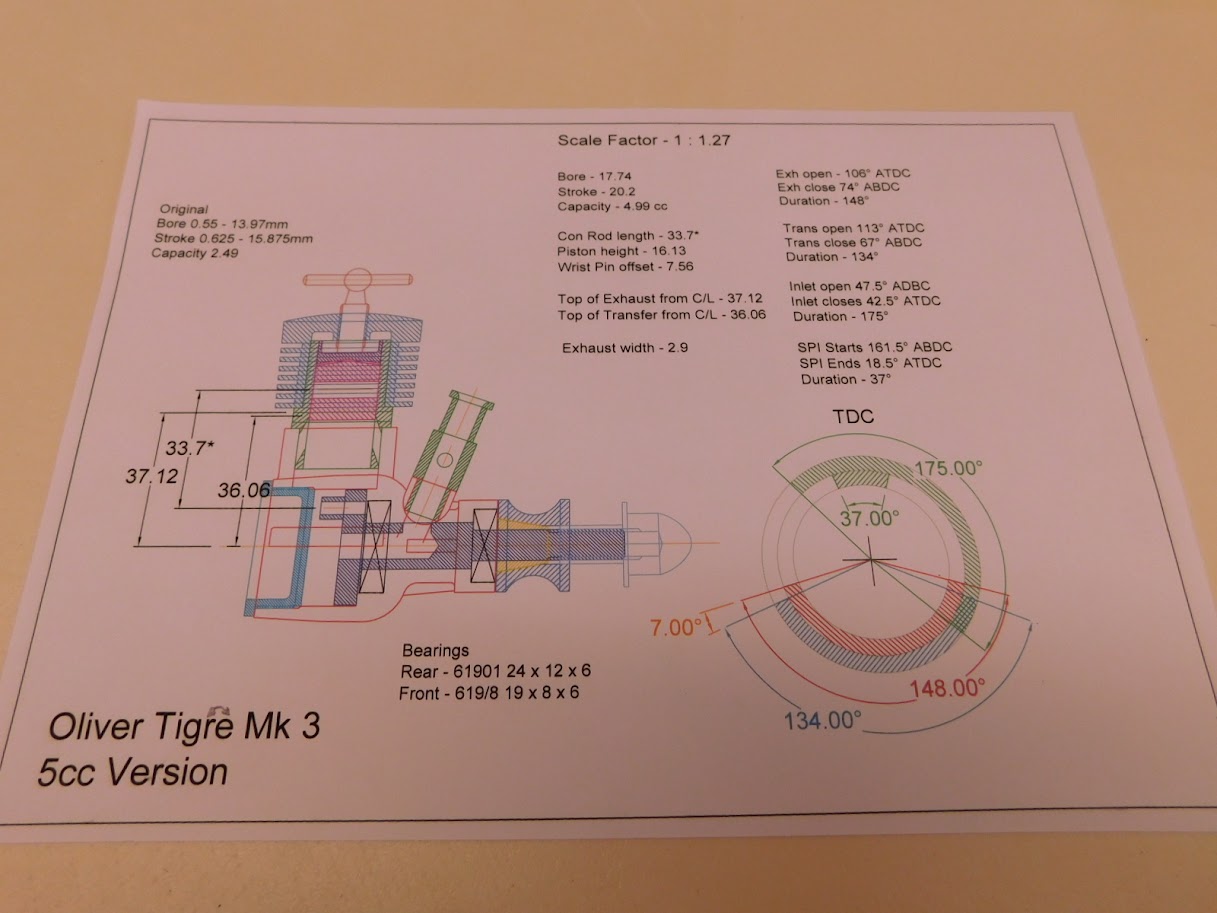 Thanks everyone. I think I understand the principle now and have the confidence to have a go soon. Work commitments and a bit of workshop remodelling (an organiser for my bar stock that is better than just chucked in a box) and a bit of fettling with the machines tightening gibs, tailstock alignment etc + some Mach4 gremlins preventing me from getting the most out of my laser cutter took the 'shed time' last week. I look forward to being able to make some swarf soon!

in the mean time, this is what the cad looks like: 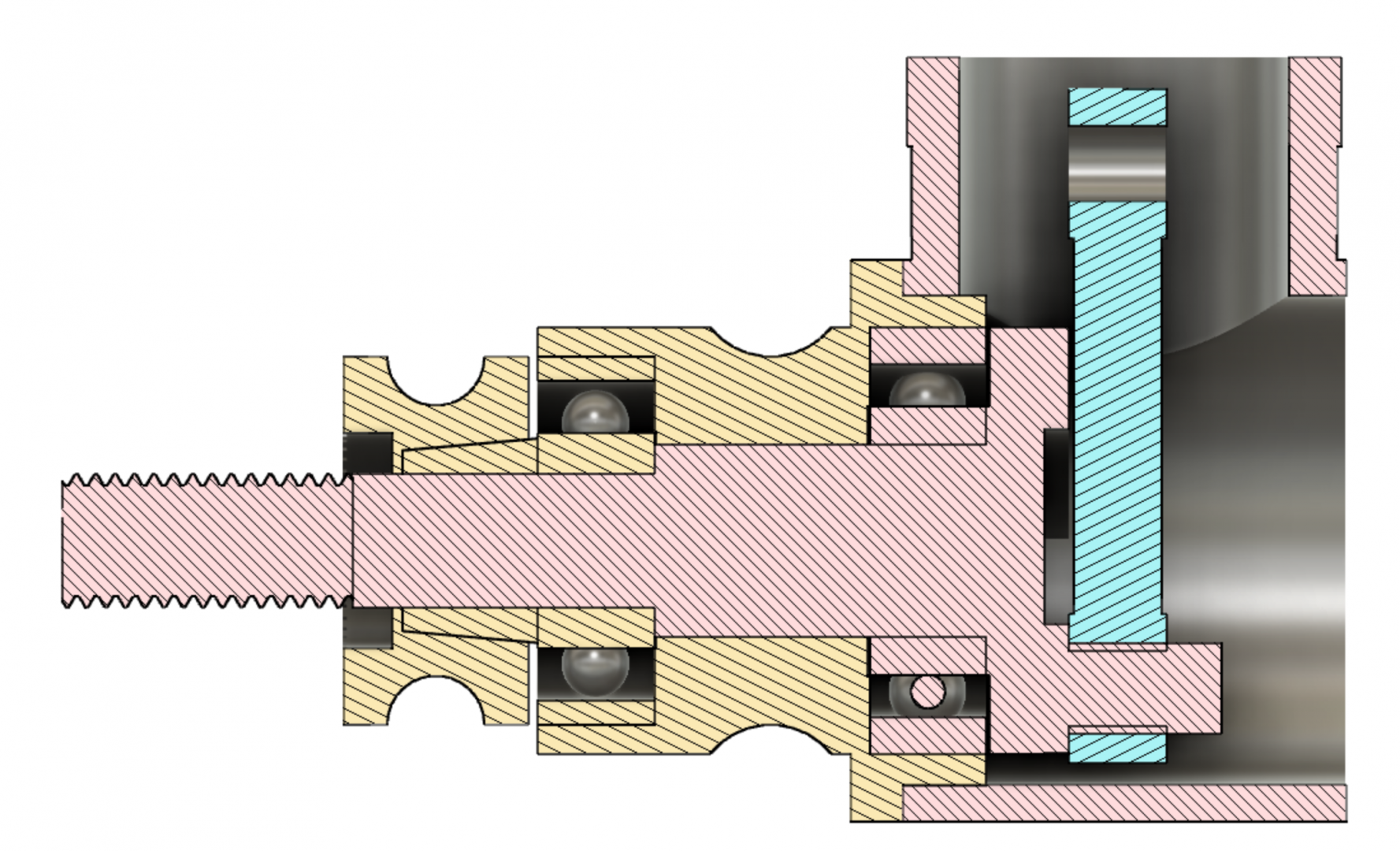 and the stock organiser 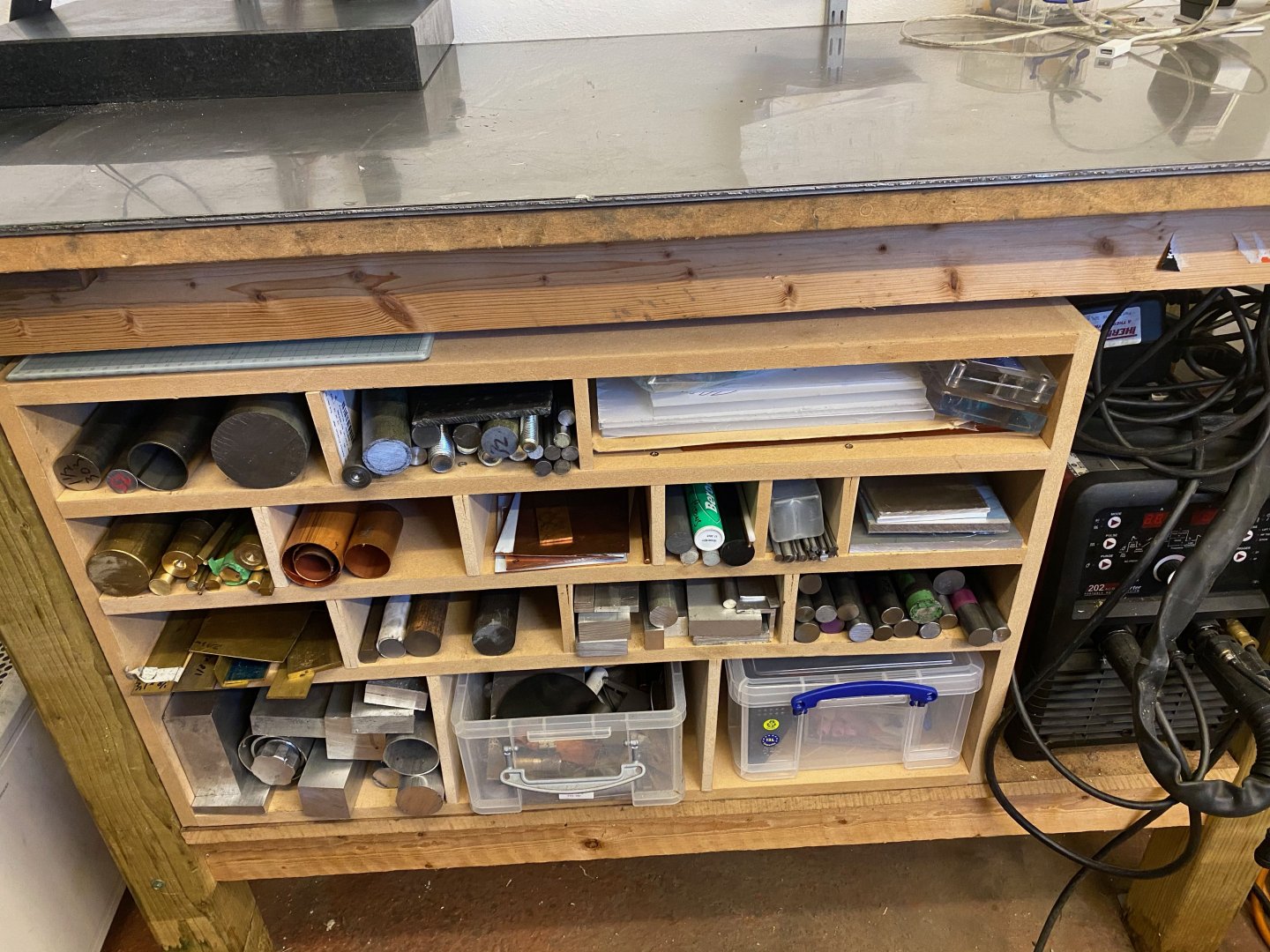 Look much better after some corrections.

Can't quite agree with Jens here as the front end as drawn still has the potential to crowd the front race. This is because of that small relief you show behind the inner ring.

Unless the tolerances are very exact, tightening the prop will force that inner against the balls and into the outer with considerable pressure. Whilst the relief shown behind the rear race inner is beneficial it is not so in the front.

Tug, if I'm understanding what you're saying correctly, should you also be recommending that the front housing be fit so that the outer race can move fore and aft, to find its own happy place? Because otherwise it could end up loading the balls against the races just by how its positioned in the front housing.

Tim , Yes I did point that out previously (post#12). Loading Crowding of the front race is very easy to do if the freedom isn't there

This issue came up on another forum some time back. An insistance that any twin bearing spindle should be preloaded being stated . At first, I found it difficult to understand what was being said but after doing some research on bearings could see what was being proposed but not how it could be achieved in this particular set up. It is clearly stated by bearing suppliers that for an ideal set up both races should be preloaded but difficult in this situation.

With this set up, as said, the ability to crowd the front race is there. As the case expands with temperature increase the effect is even more exacerbated. If the front race is a light push fit in the housing however with a small clearance behind such movement occurs without effect. Not perfectly ideal maybe but perfectly good enough for the thousands of commercial engines over the years done similar.

Since the issue was first raised I have often thought, though not attempted to do it, that if the front bearing outer was to seat against some resilient elastic material - urathane perhaps, possibly even an o ring - the compression of such would keep the front bearing in a degree of preload in the correct direction. Whilst it may work in the short term however I'm not convinced the o ring long term compressibility without permanent deformation would be suitable.

All the engines I have built so far have had this 'clearance' set up without any issues. Access to more precise machining (and measuring) methods not usually available to the home builder may potentially change matters of course.