I wanted to build a small IC engine, small enough to put my skills to the test, asked around here on HMEM and Cogsy gave me a link to PUTPUTMAN aka Arv's Tiny IC.

Okay so almost a week ago I started cutting away at my first part, which was unsuccessful. Well I couldn't leave the workshop without the satisfaction of holding a part I just made, so made the fuel tank first. 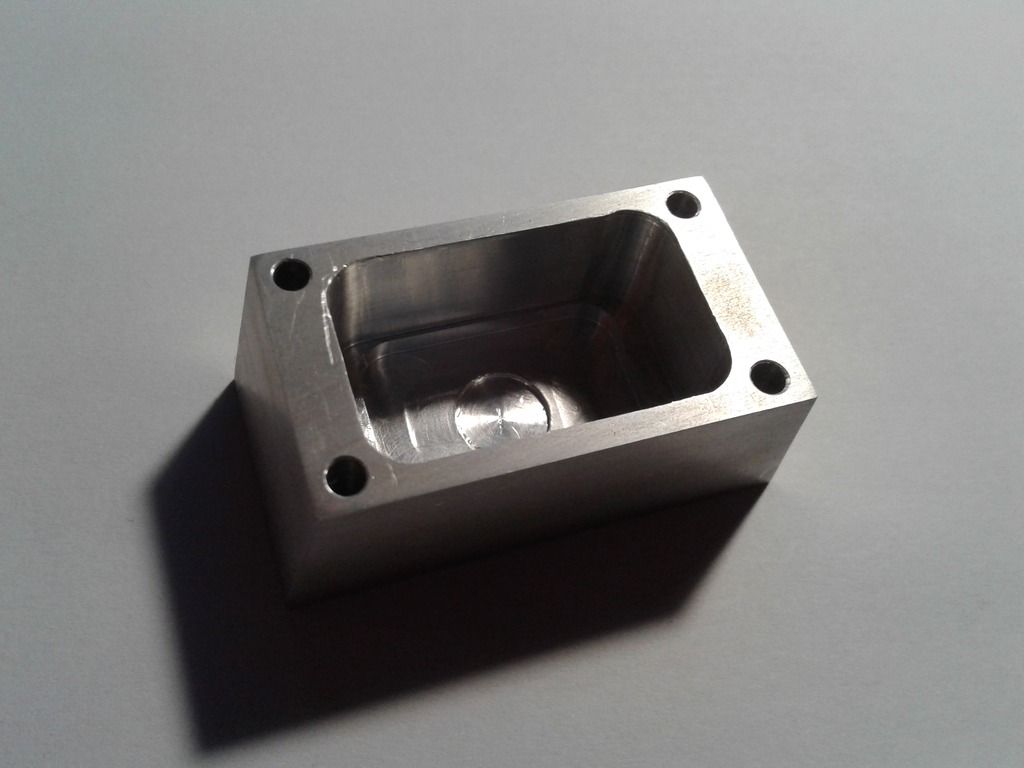 The next day I made the flywheels and started with the head. Now as all of you "Tiny" enthusiast may know, is that the original plans by Arv, shows the spark plug hole at an angle of 10 deg from the front and 10 deg from the left. Tried figuring out how to hold it in the mill, as we don't have any fancy swivel vices... but what we have is a 3D printer. So I drew up some holders to hold the head at the correct angle and printed it. It worked great, and made quick work of something that would've taken me a while. 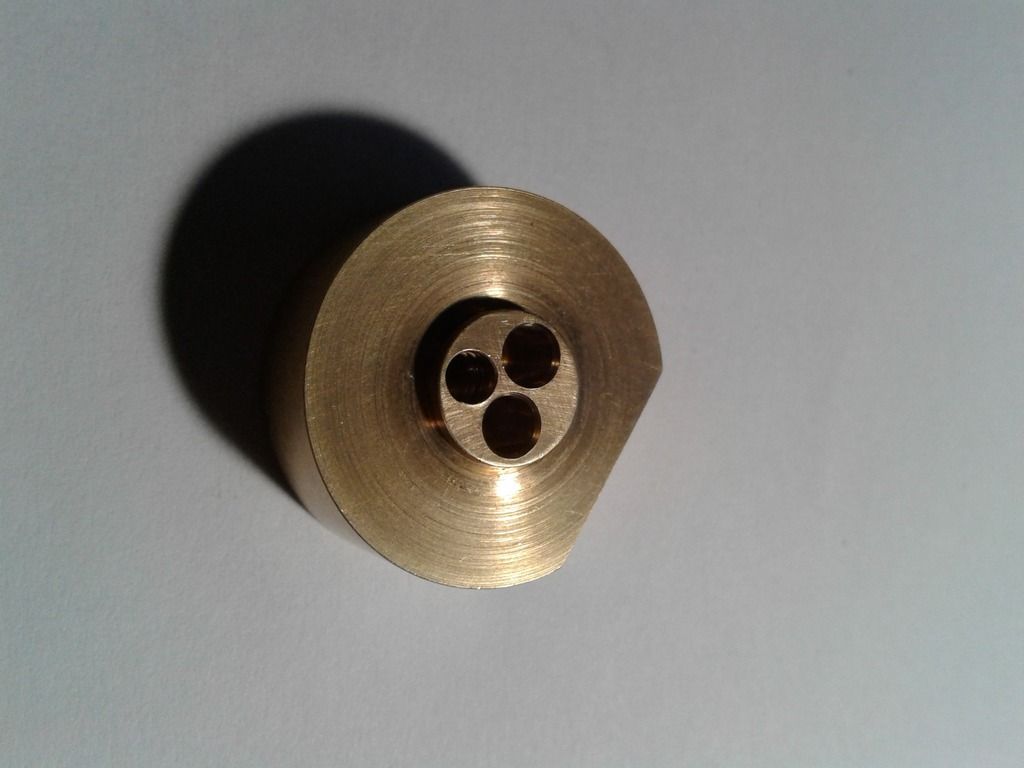 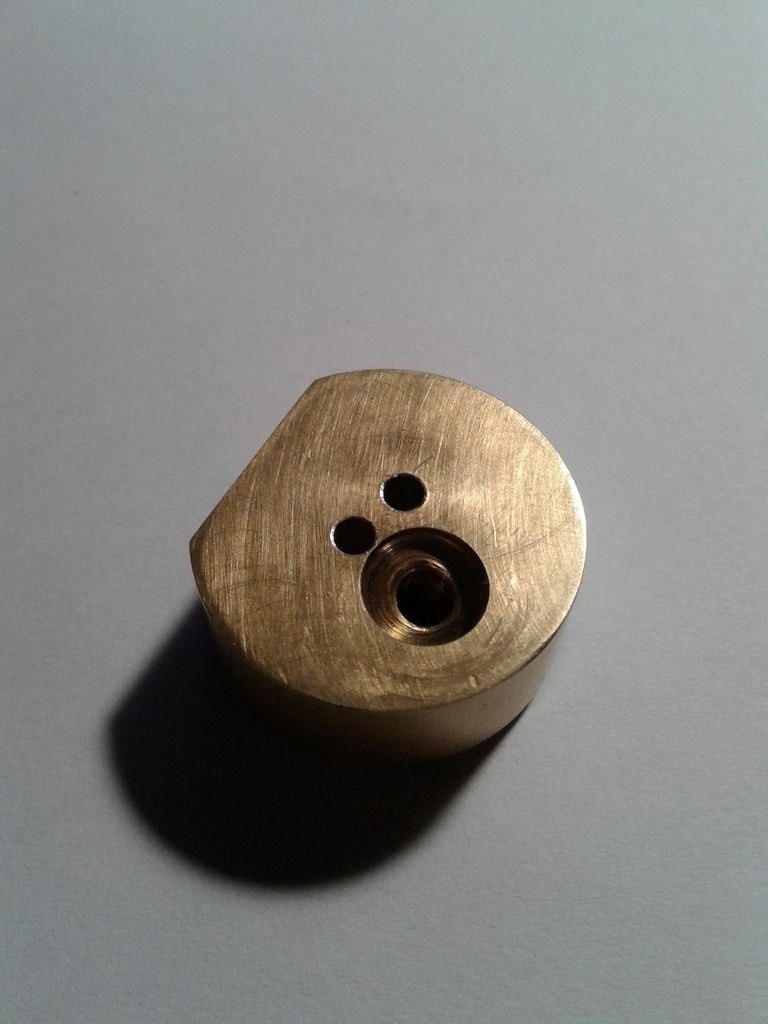 I then turned to the spark plug, which is another reason why it's so special.. because it was made from bones. Okay well, we don't have any corian or drylin, then I saw a piece of bone that was left over from the gun butstock my dad had to make for someone, so I figured that I might as well give it a try. Well the spark plug works, but I don't know for how long . 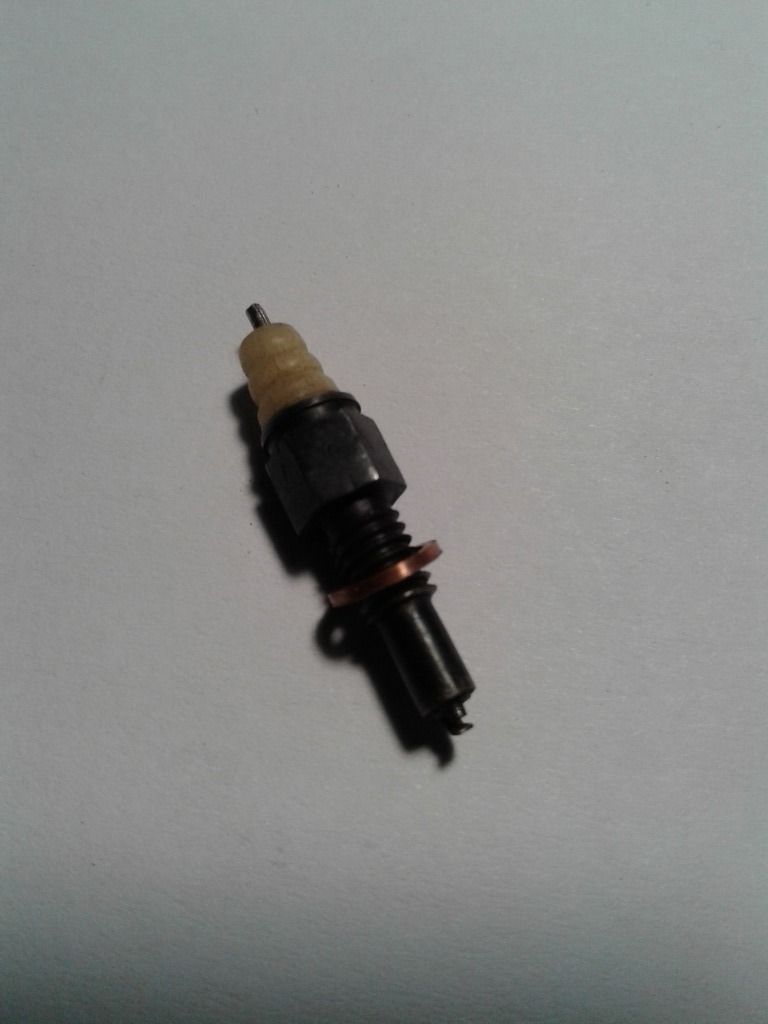 The cylinder was made from some steel bar and drilled and bored to size and finally lapped. Piston was fairly quick to make and fitted a Buna-N o-ring, that I know I should replace. 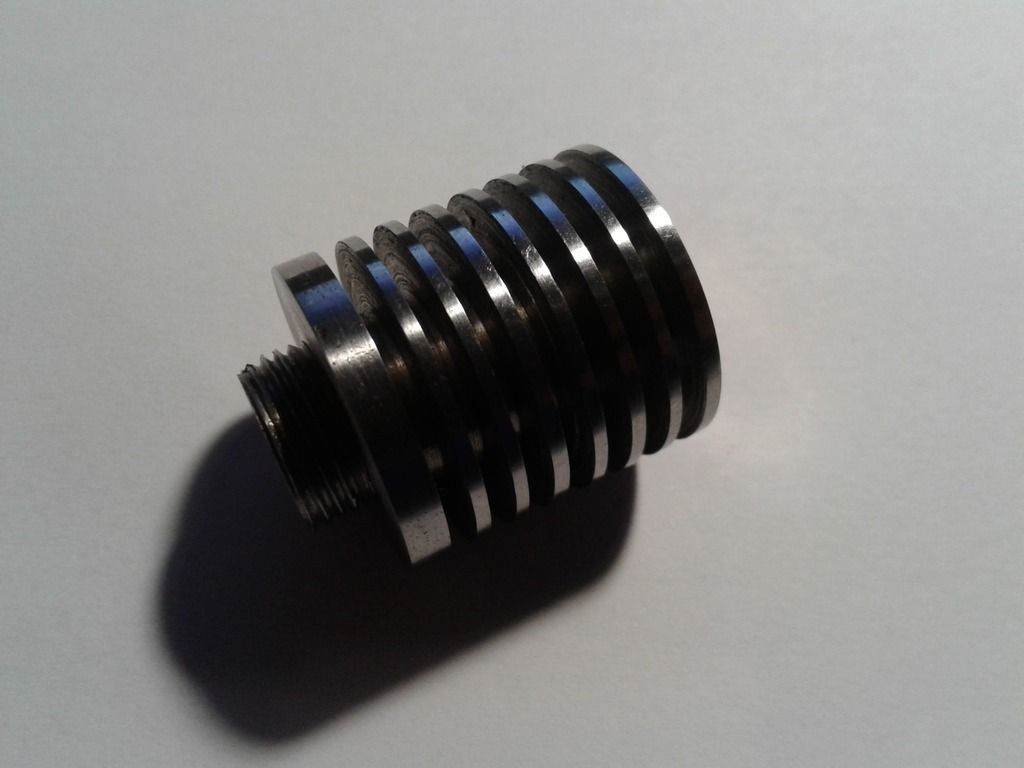 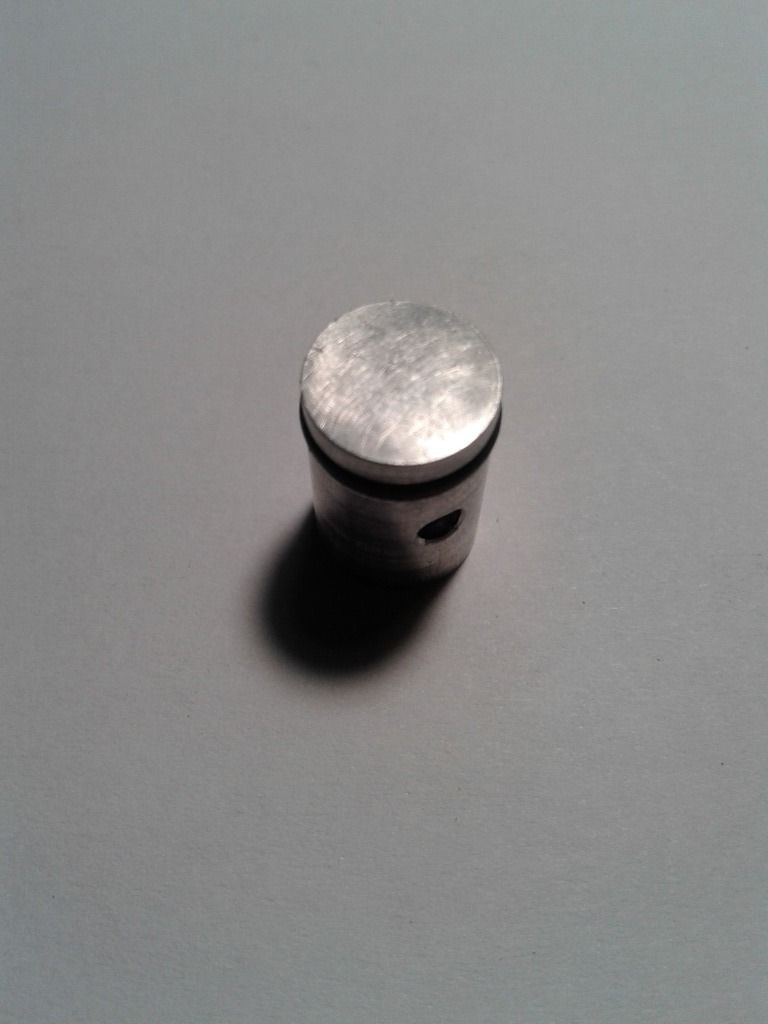 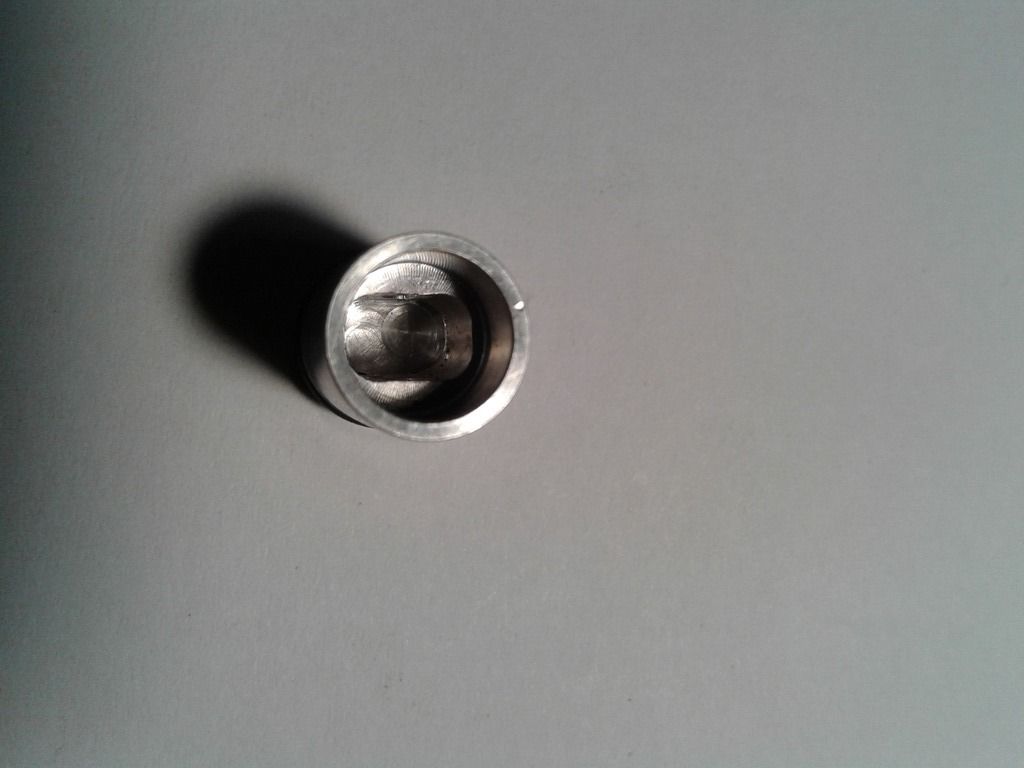 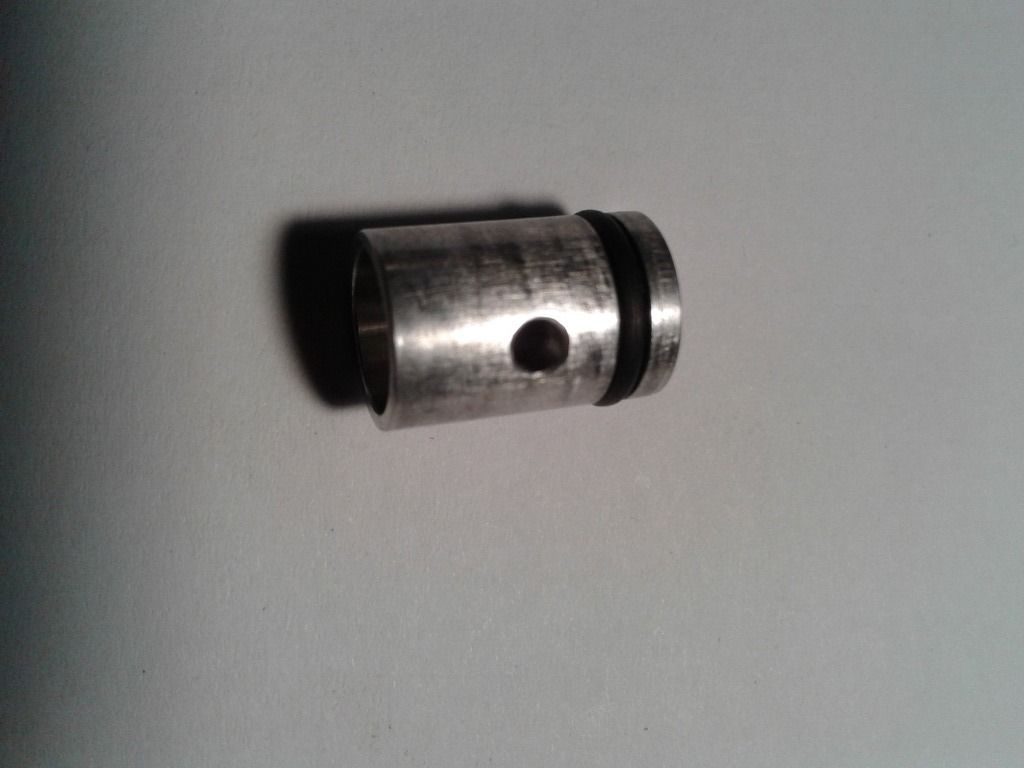 I made the valve next (only one at the moment) , easier than I thought it would be. I deviated from the plans when I made the valve, I made it thinner at the valve bottom to allow a bit more flow. The valve keeper was fairly easy as well, I just lost 3 of them, by sneezing, by dropping it in the swarf and the other one I just can't remember where I had put it. 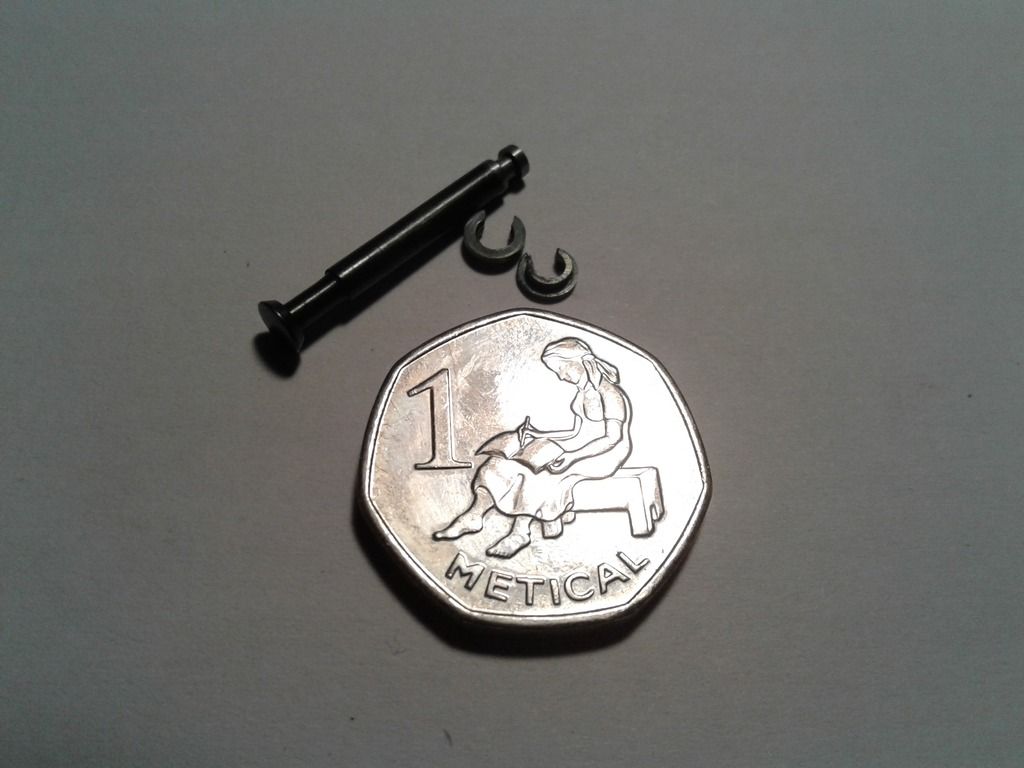 The crankshaft was the part that had me worried, the first one was a complete stuff up, but the second one came out okay I think. Took a bar of steel just over 20mm and center drilled both sides, marked out 0.250" from the center on both sides, making sure that they are both square, and center drilled them as well. I used a center held in the chuck and the live center at the toolpost and wanted to use a lathe dog to machine the crankshaft, but the one we have just won't fit, so I just went ahead without the dog. Surprisingly it worked, but didn't want to hold when I wanted to machine the crank pin. So I used the hot glue gun, and after 5 or 6 tries it finally held on. After the shafts have been machined to the right diameter I took it to the mill and machined the counterweight. 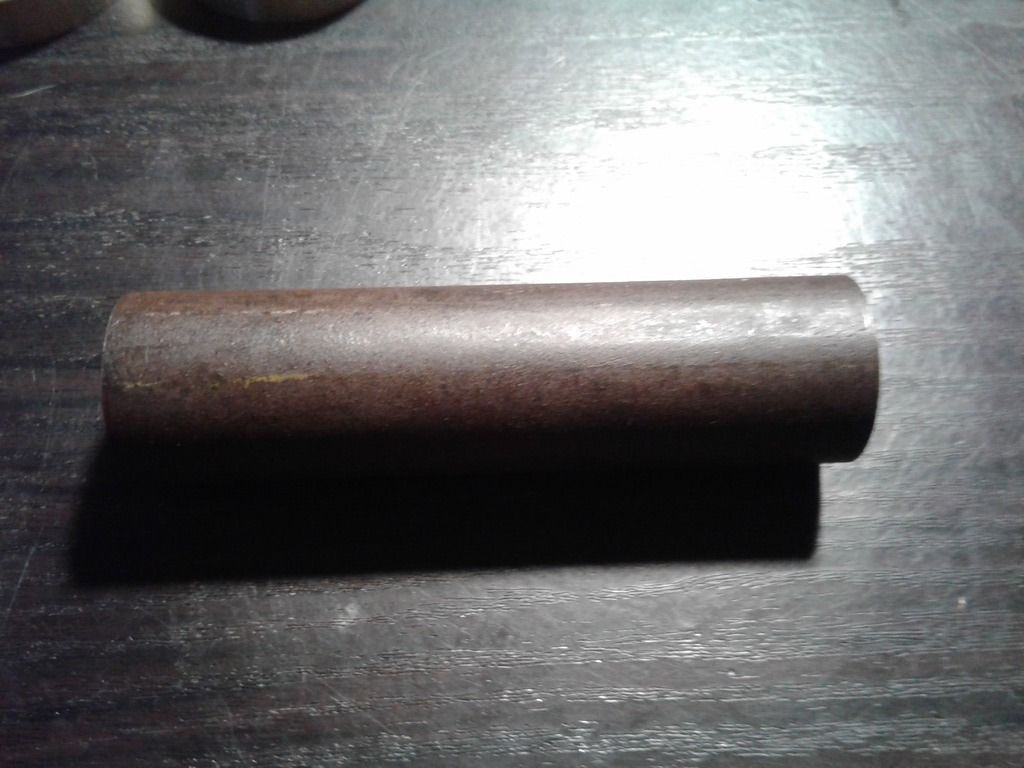 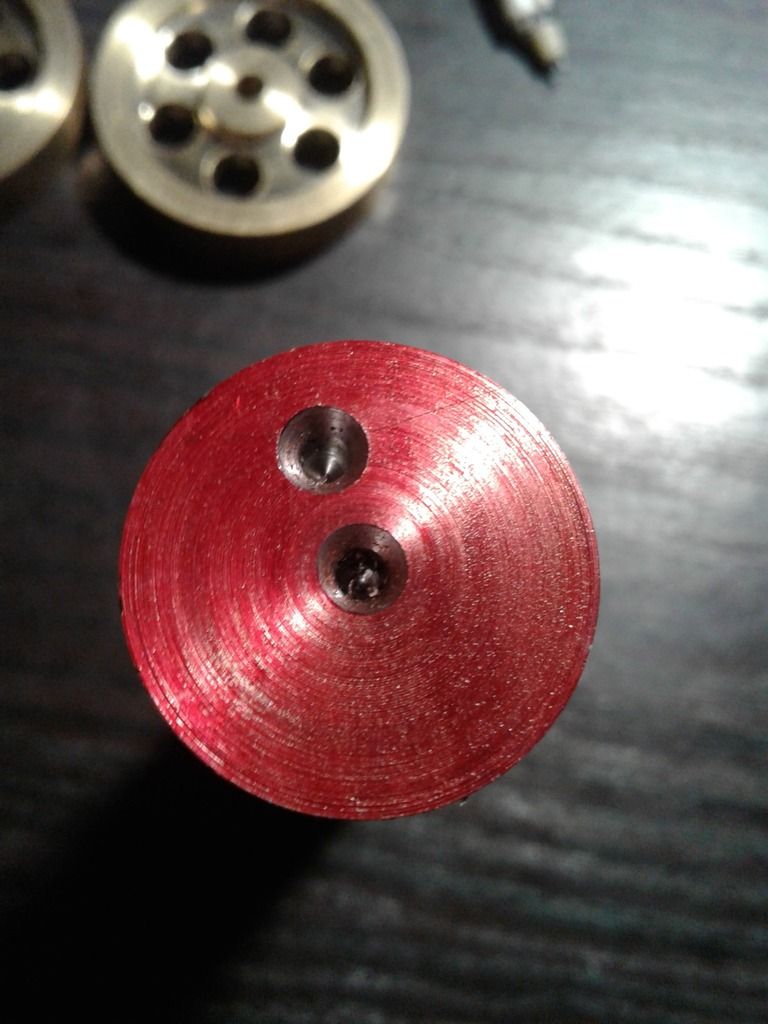 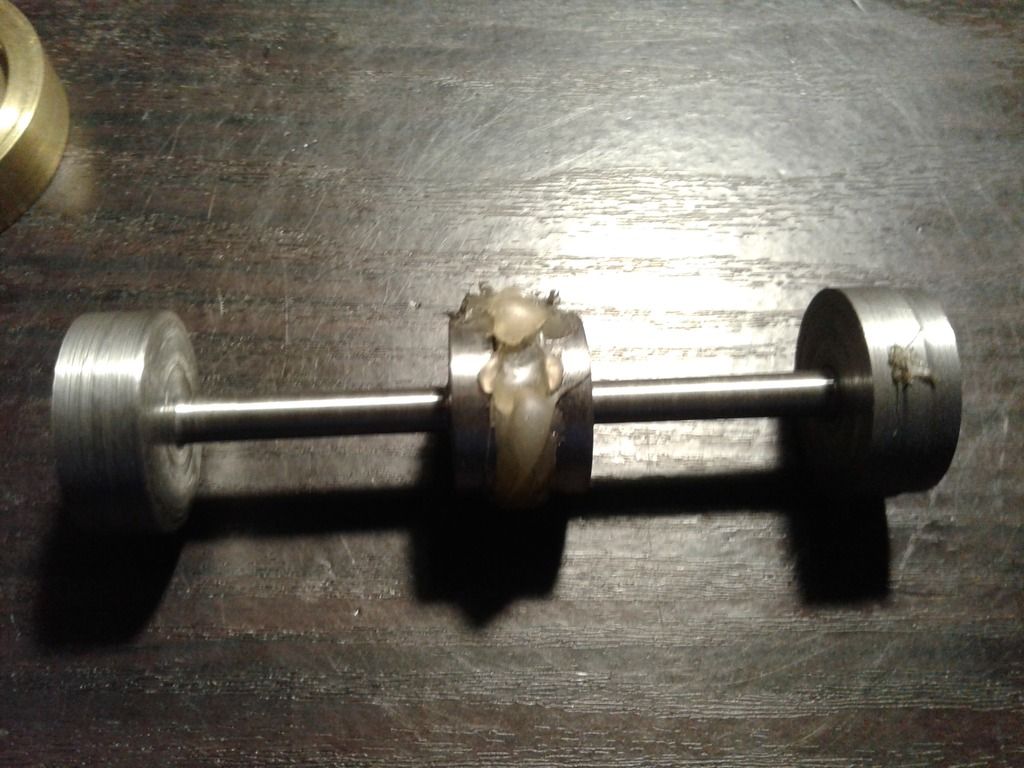 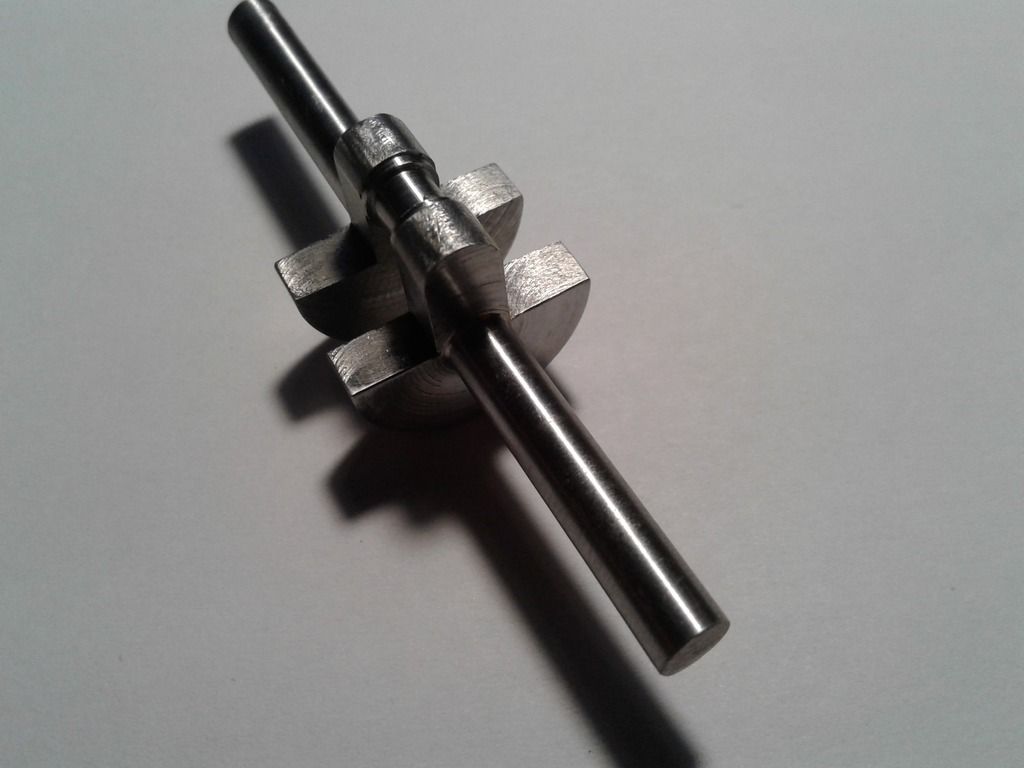 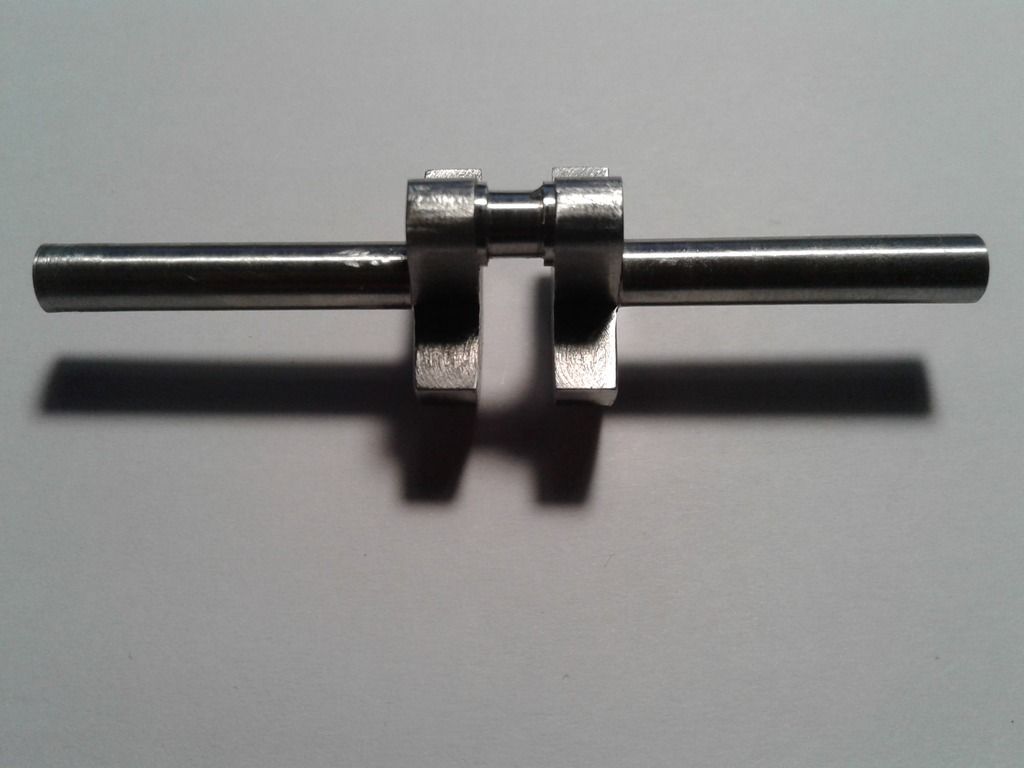 Here's all of the bits together with 1 Metical. 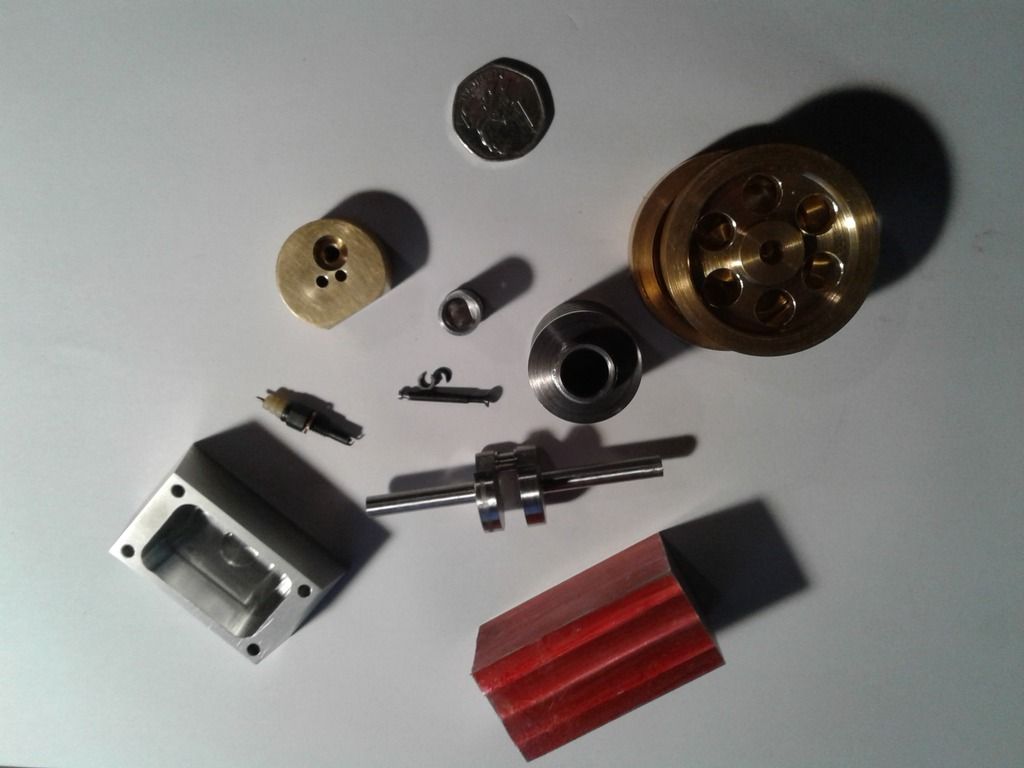 So tomorrow I'll have a go at the conrod, while I wait for my cutter to arrive to machine the crank case.

Thanks for looking in

Wow you have been busy. Nice work!

You sir have far more guts than I. I'd never try anything that small....

Wow, you're making it look easy. It'll be running in no time.

You are going about it the right way when trying something different, one good part at a time.

vederstein said:
You sir have far more guts than I. I'd never try anything that small....

Same here. I pay my respect to you for your dexterity.

This is amazing. I'll love seeing how it comes along and the finished project.

Thank you all for the kind words.

I didn't make a lot of progress, because I had to study for exams.

The connecting rod has been made, took a few tries to get it right. It was machined from aluminium. The blank was cut out and then it was squared up in the mill and the recess cut for the two piece bearing at the big end. I then drilled and tapped the holes and mounted the piece of previous machined split bearing half and machined it to final size. The holes were then drilled and the big end was reamed. A "pin" was turned from a piece of steel in the lathe and the rod's small end was glued on so that I could machine the round end of the con rod. It was then heated up to release the glue and turned around to machine the other end. I then just used a file to round of the rest of the rod. I then used some fine wet and dry sanding paper to get rid of all the edges and brushed with a wire brush. 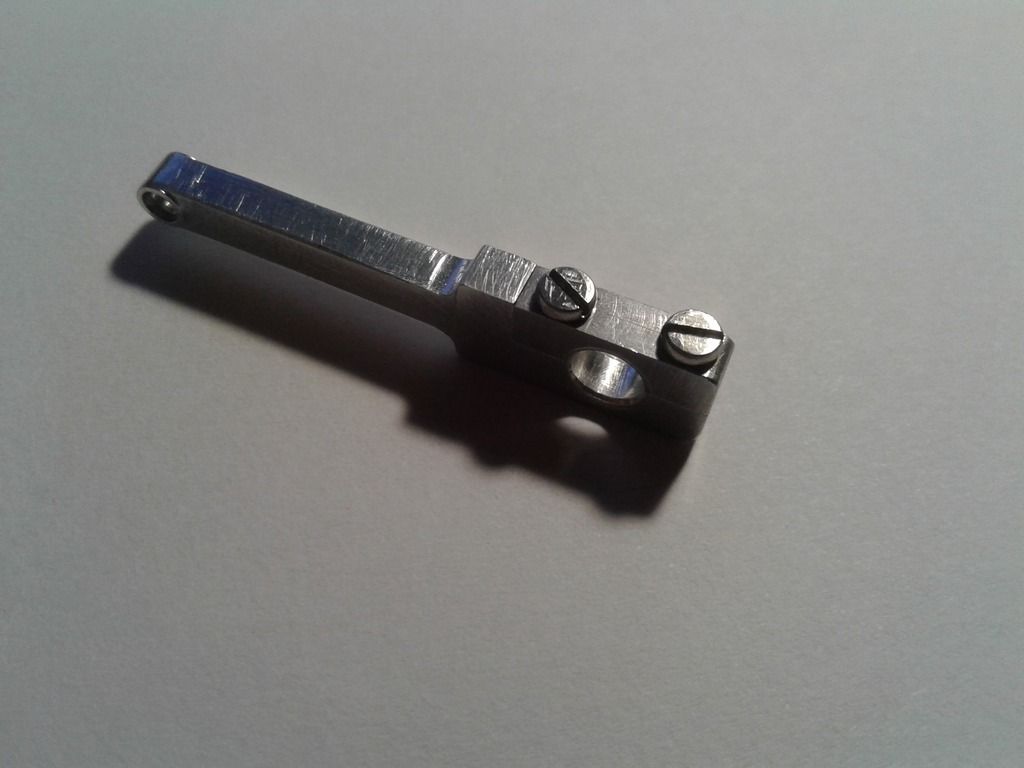 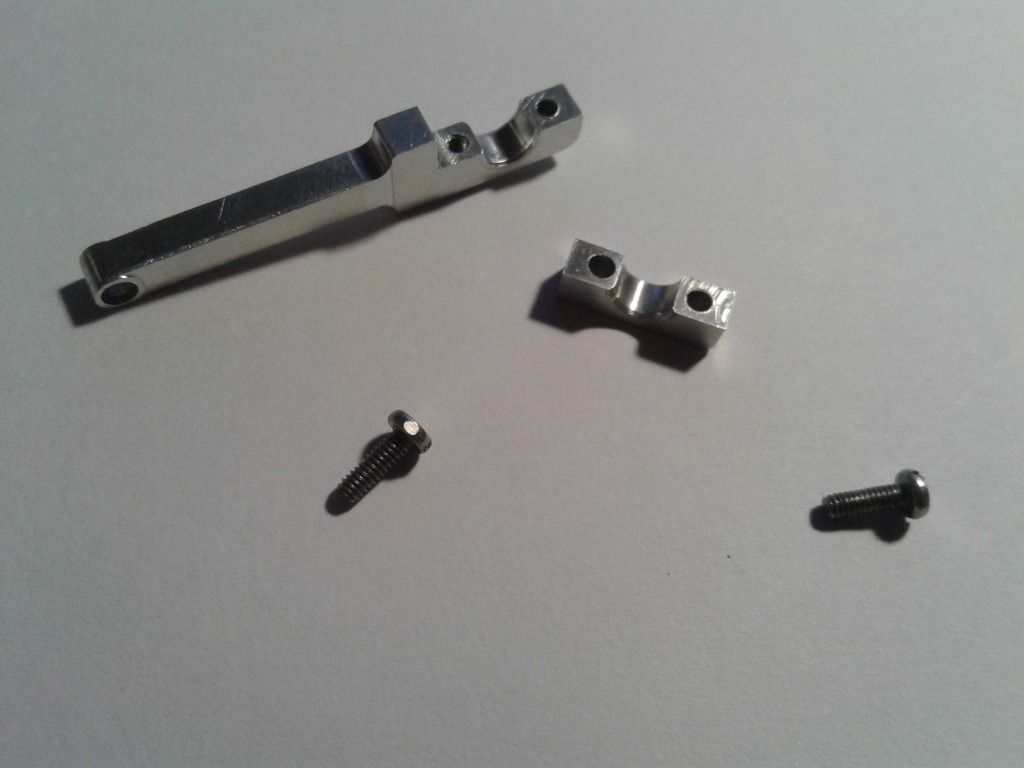 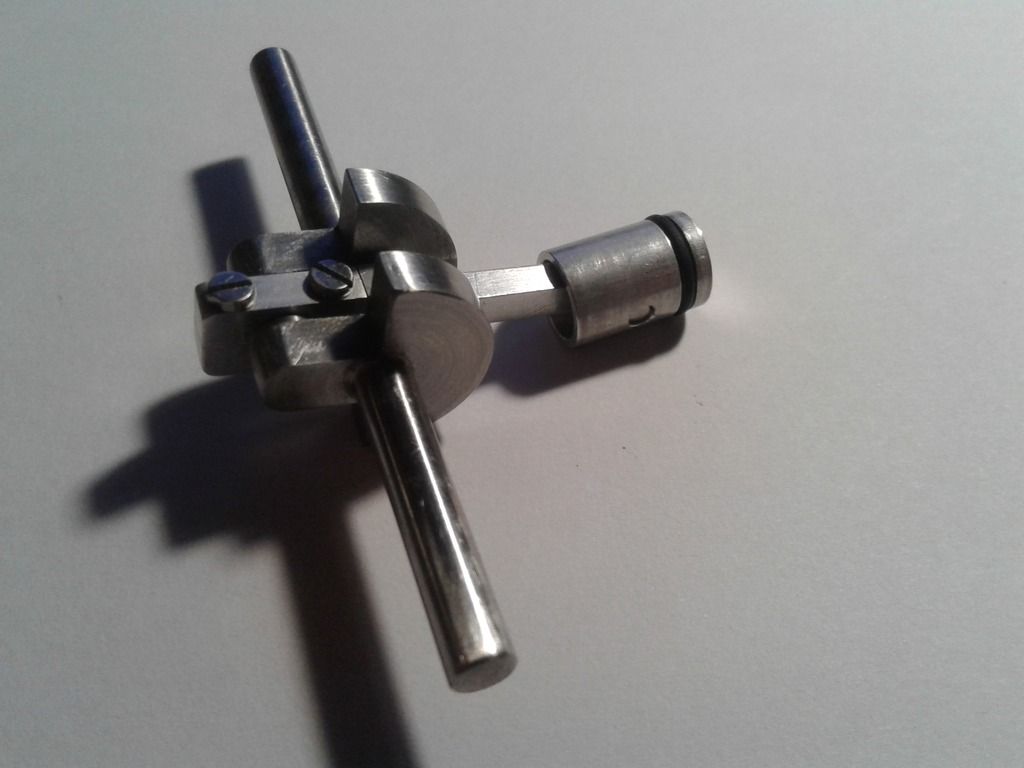 I then went on to make a "non functional" part, the exhaust. I used George's (gbritnell) design, but made it a bit smaller. First the top part was machined and parted of over size and then I machined the body. I made it a light press fit and silver soldered it together. I then machined the part in the lathe and parted off. I then drilled the holes (14 in a row instead of 12) without using an indexer, just took a pair of dividers and marked out the position of the holes. 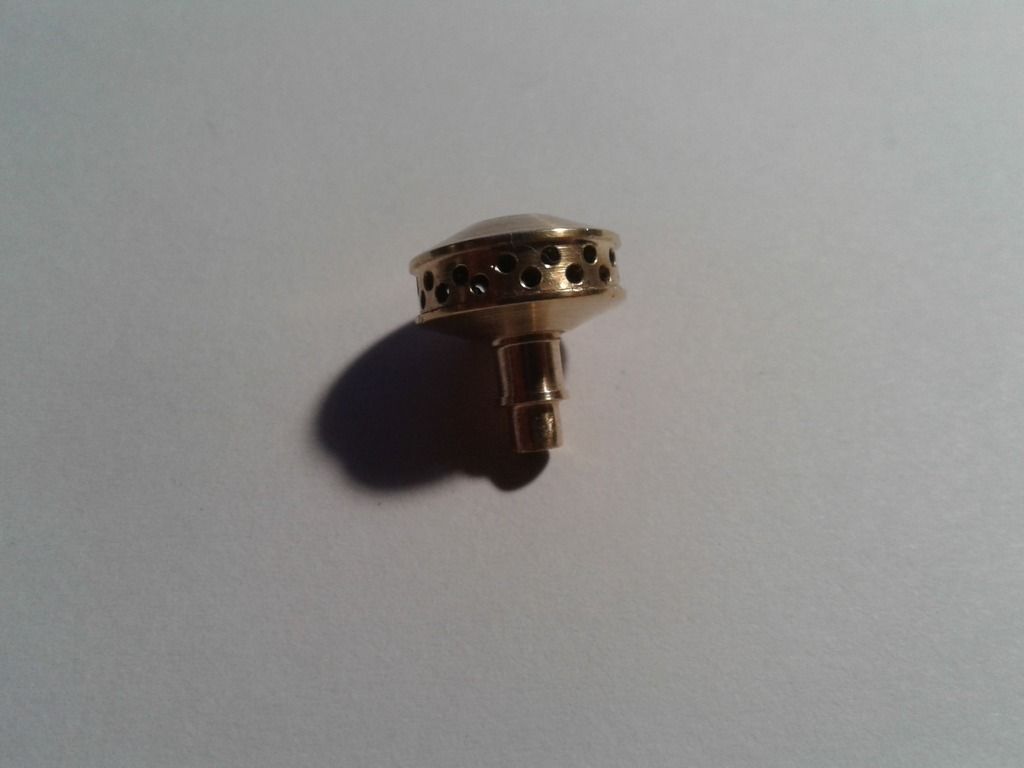 My cutters finally arrived, so next up will be the crankcase.

It's a "throw away" 3 flute long series end mill from Kennedy. 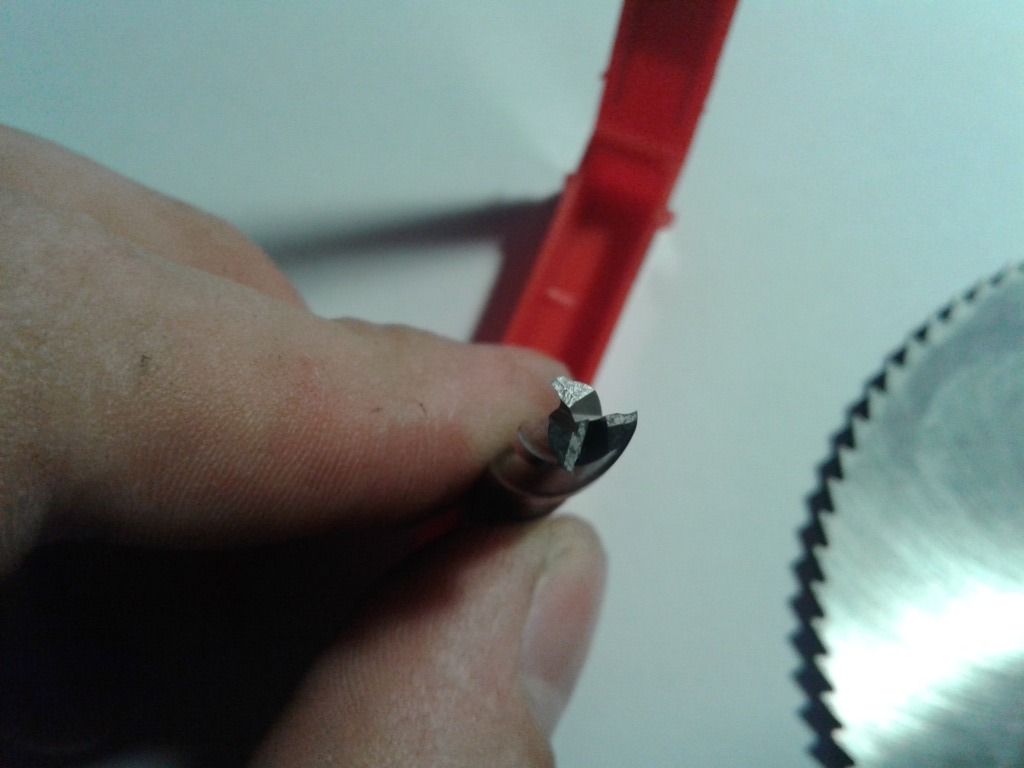 Thanks for looking in.

Marinus
You must log in or register to reply here.