I'm back. Sorry it took so long but I had to prove / disprove my observation of a vacuum being in the cylinder when the engine does not fire. I decided to make a very elaborate intake valve arrangement consisting of the standard poppet valve followed by a sliding piston valve (not sure of the correct term).
It turned out to be one of those things that you draw and figure it's fine and then realize it won't work so you make a change. Eventually when it looks good you end up with something possibly way more complicated than it needs to be. So please don't comment "you should have done it this way". It's what I ended up with after a lot of changes.
Unfortunately I had to throw some electronics at it.
The theory was I'd needed to keep the poppet valve because it will seal properly when there is pressure in the cylinder under normal operation. The problem to solve was how to relieve the vacuum in the cylinder (that will open the poppet valve) but don't let it pull air through the carb. Then, when the proper intake cycle begins, enable that proper vacuum to the carb. That's where the piston valve comes in. It's solenoid operated and it's set up like a directional valve. It vents the cylinder vacuum when the poppet opens but through the use of a couple of hall sensors that detect the proper intake timing it closes the vent and opens up the passage to the carb.

The picture below is the solenoid I pulled from by parts bin. You can see it is fastened to the top of the water jacket and pulls the piston that is inside the valve block. At rest the piston is in vent mode. Behind that you can see the standard poppet valve that leads to the cylinder. 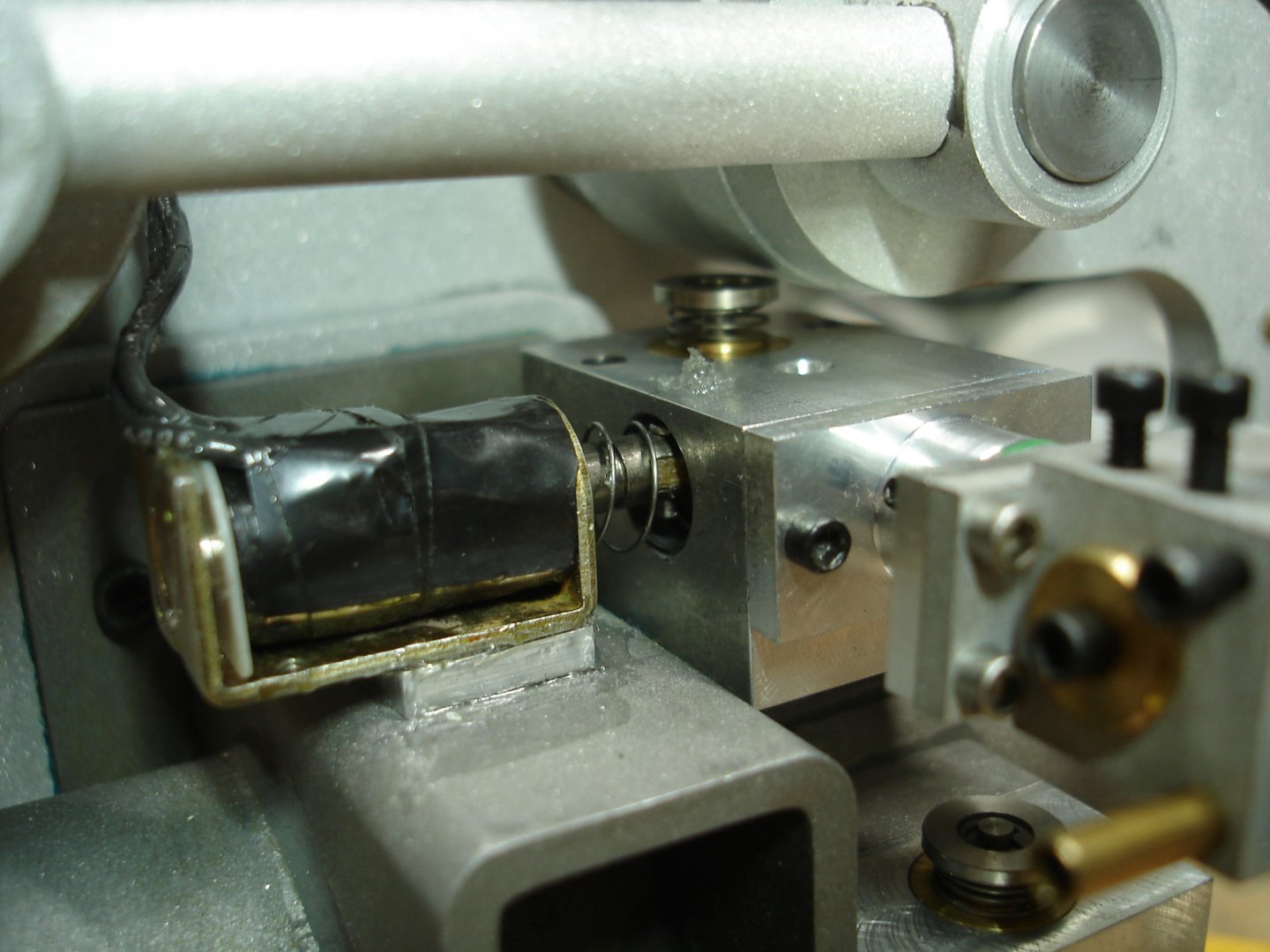 Below is a CAD drawing looking from the top of the valve block with the piston in vent mode. The vent hole is the small one in the piston valve and body facing you. The vacuum will come up through the poppet valve and will pull air in through the vent instead of the carb. 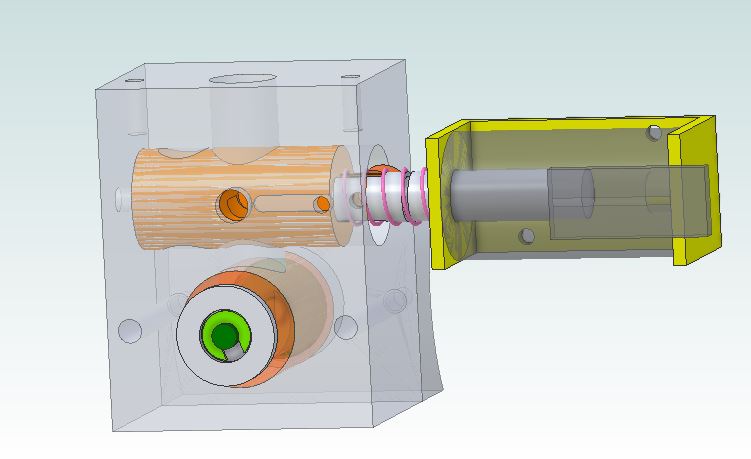 The next image is from the carb input side also when in vent mode. The passage to the carb is blocked by the piston valve. Vacuum comes in through the poppet valve (green) and air is pulled in though the vent on top (not the carb). 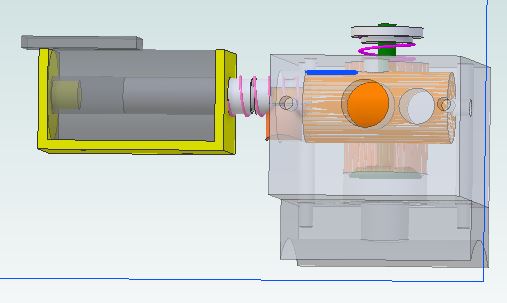 Looking from the top again, the next picture shows the piston valve when the solenoid pulls in. The vent is blocked off and there is a direct path to the carburetor (up in this picture). 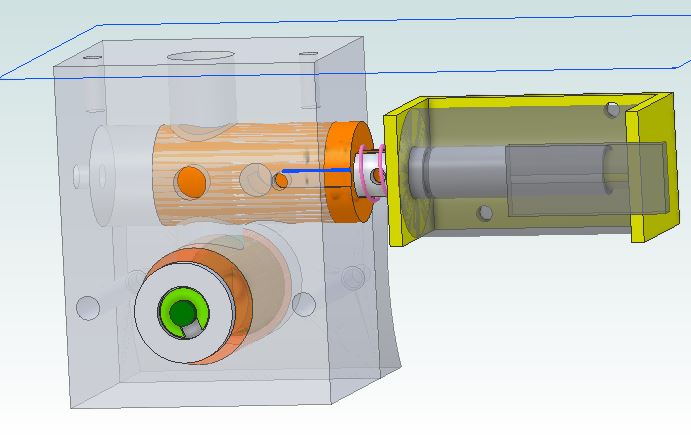 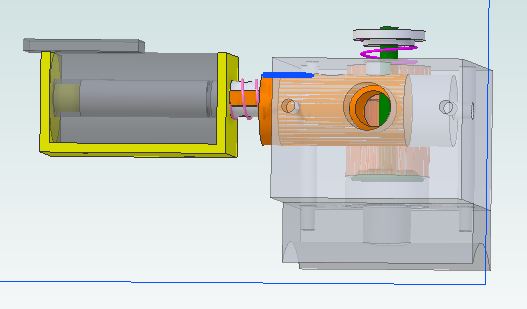 Obviously the trick to operating the solenoid at the right time is to time it with the motion of the pistons. This turned out to be fairly easy by adding a rotating magnet plate to the crank shaft and a couple of hall sensors on a stationary plate. The first hall sensor triggers a simple 555 timer (cheap) that activates a mosfet to turn on the solenoid. The second hall sensor resets the timer and de-activates the solenoid. The timer function is not really required. The chip is used as a cheap flip fop. But I took advantage of the timer function to turn off the solenoid if it gets triggered but not reset (depending on where the engine stops) after about a half second.

The picture below is the surface mount board I made for the timer / driver fastened to the frame. Building that was not without problems. WOrked fine on the bench but when installed the buzz coil ignition was triggering it so I had to tack on a few extra components to filter the noise. That's why the extra stuff scabbed onto the board.
The nice thing about all this crap I have added is it can be removed with no signs it was there. 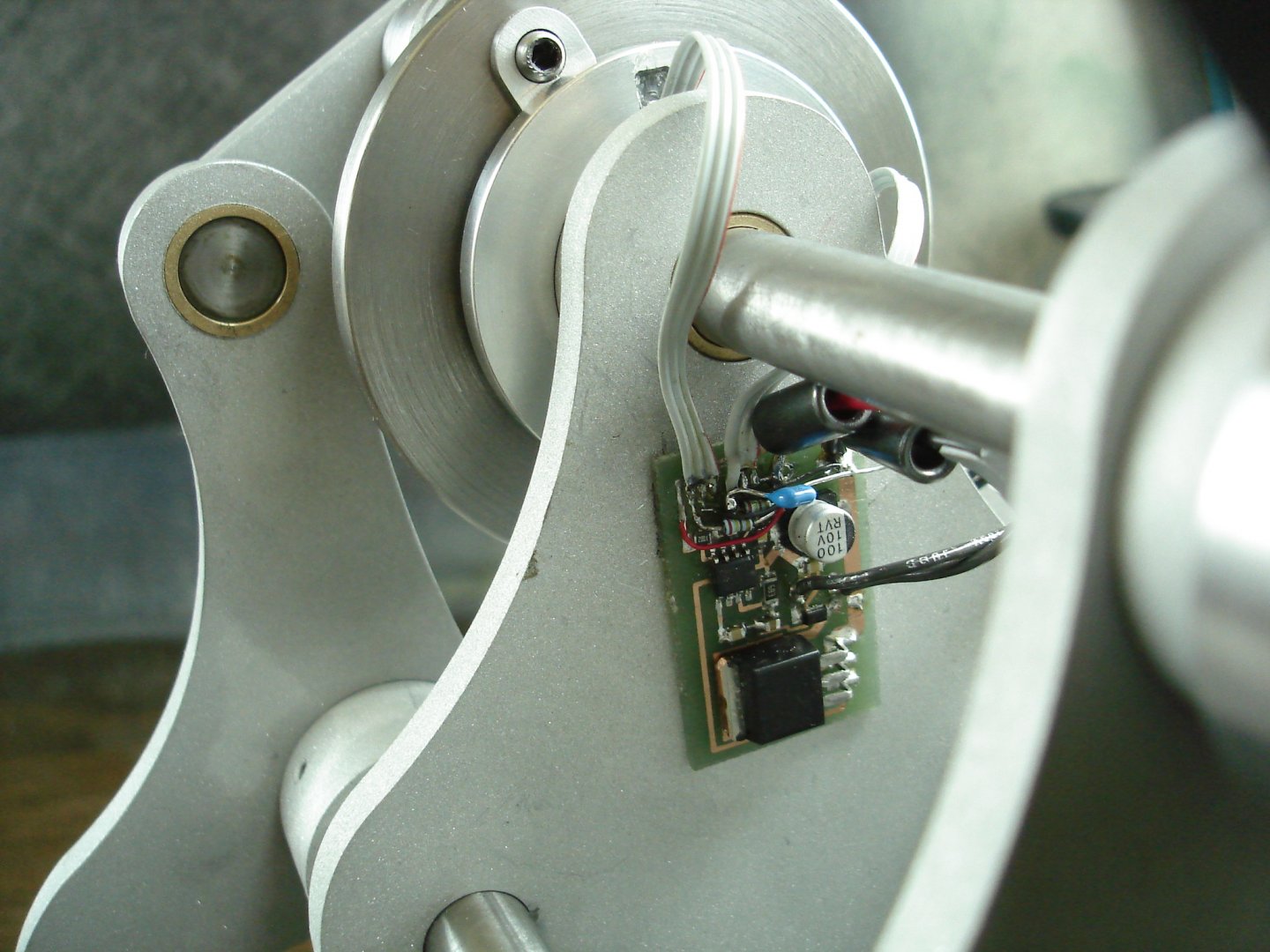 SO.... does the engine run now - NOPE.
But this addition does prove my observation of the vacuum in the cylinder when it does not fire.
Was it the source of the problem? Apparently it wasn't the only problem but IMHO one that could have been a source of mixture issues. So it was worth eliminating it before moving on to other issues.
This modification does function as expected. I can feel a vacuum on the vent port on what should be the exhaust stroke and then the vacuum on the carb seems about the same as before when the solenoid switches to intake mode. The exhaust valve also works because there is a (normal) brief period of compression in the cylinder after the vacuum is vented and the intake port is covered while the piston finishes a few degrees of motion to finish the exhaust stroke.

So what's the next step?
As some have suggested I might add a chamfer on the side of the pistons to make a sort of combustion chamber.
I also seem to have lost a bit of compression (wear perhaps due to minimal lubrication). So I may make new pistons with the chamfer and with O-rings if I can find some of a suitable size This way I can put the current pistons back in if required.

BUT. This won't happen any time soon. It's summer and there are a lot of things that need attention outside the shop.

Although not the Gingery Design - apparently it can be made to work. Dave Perreault researched the original patents and managed to get one to work. Apparently very finicky. So maybe there's hope for me / us yet.

dsage said:
Although not the Gingery Design - apparently it can be made to work. Dave Perreault researched the original patents and managed to get one to work. Apparently very finicky. So maybe there's hope for me / us yet.

An interesting point: I just looked at the original patent drawings again which are available on the web:

The original design seems to have a mechanical actuator on the intake valve. I am not sure whether it actually controlled the intake or if it was intended to be a governor. I will have to take another look at that when I get a chance. I keep saying that I am not going to get sucked back into this thing but things keep coming up which renews my interest.

Yeah. Me too. Interesting.
I've been doing some drawings for new pistons with the chamfers to get more combustion space and O-rings. I've noted recently that I've lost a lot of the original compression I had. But strangely I can build a good vacuum. Not sure what's going on with the that. I'm not sure if the O-rings will last though because the rings pass over the ports in the cylinder and they will probably wear them out.
I'm grasping at straws really.
It's not real clear in the video what's going on with the intake valve on his supposed copy of the patent engine.
I'll ask him.
I'll also have a look myself at the patent drawings. Most times they are sorely short of information and possibly mis-leading info (purposely).

Back at it sooner than I wanted to be I guess.
D

I got a pretty quick email answer from Dave P.

The 10" flywheel Atkinson Differential engine has atmospheric valves on both intake and exhaust.
The mini Atkinson Differential engine has mechanical intake and exhaust.
Being so small, I found the need to come up with a different valving approach.... So that is when I decided to design my own valve arrangement.
Using atmospheric valves on this engine would make it very hard to build.... This slide valve simplified that whole section.