An Older One Off Boiler For Sale 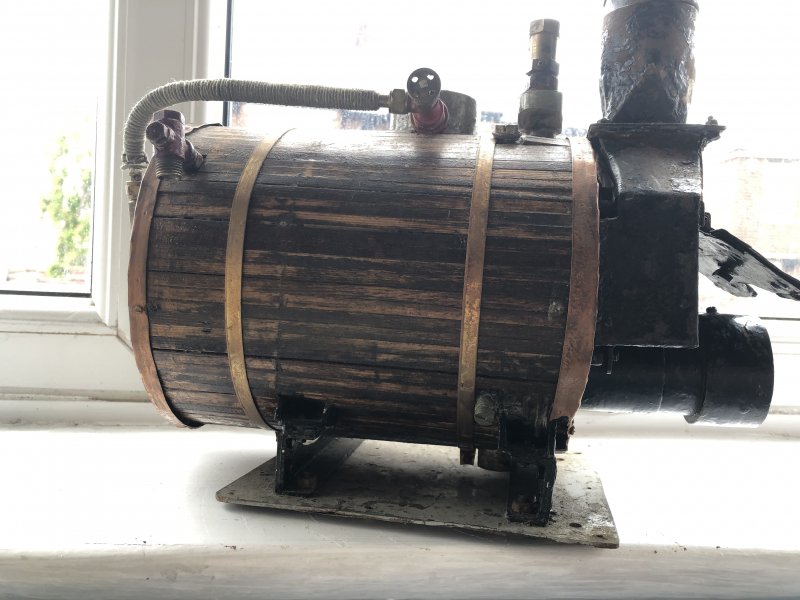 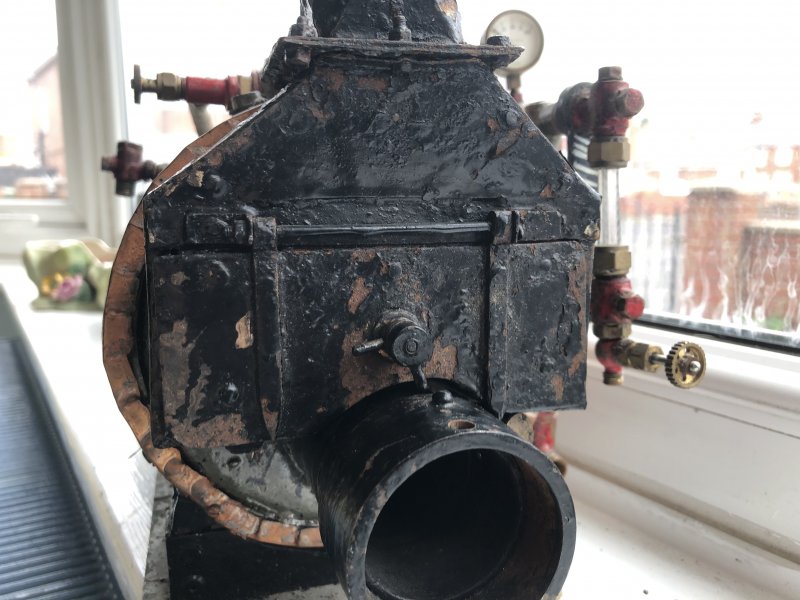 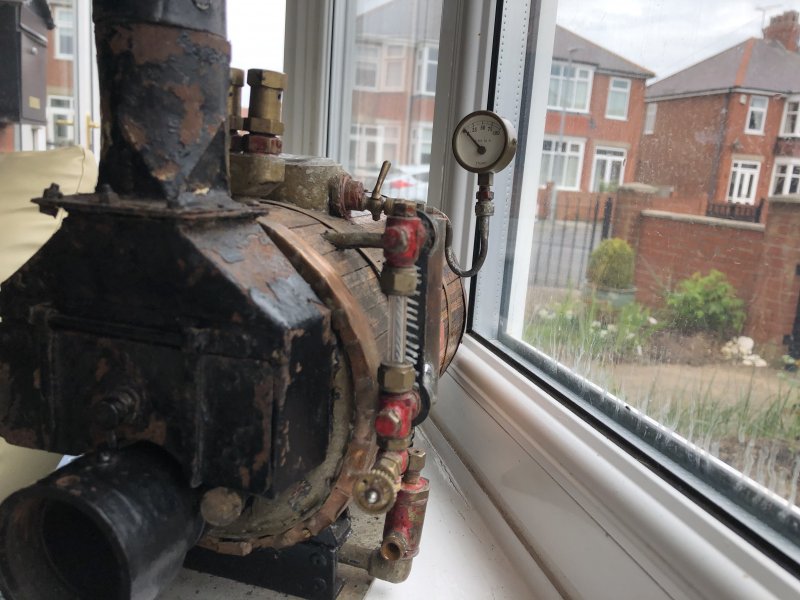 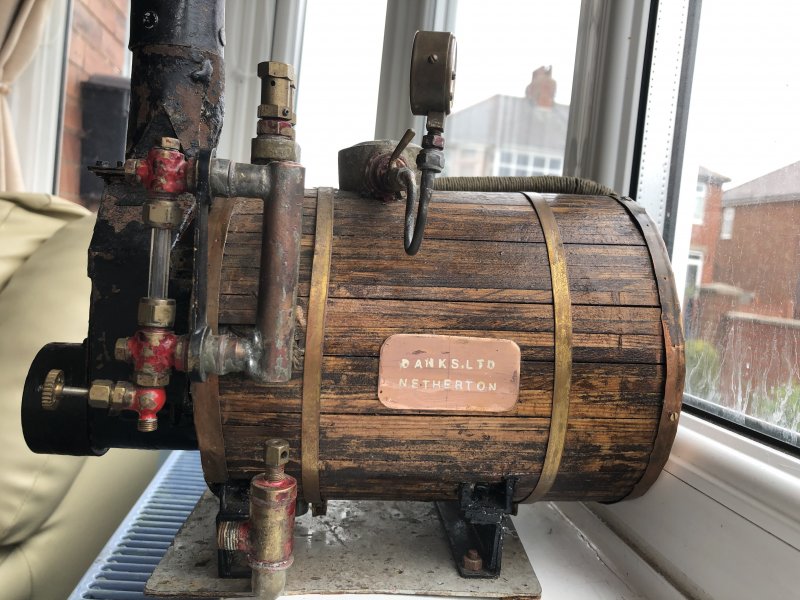 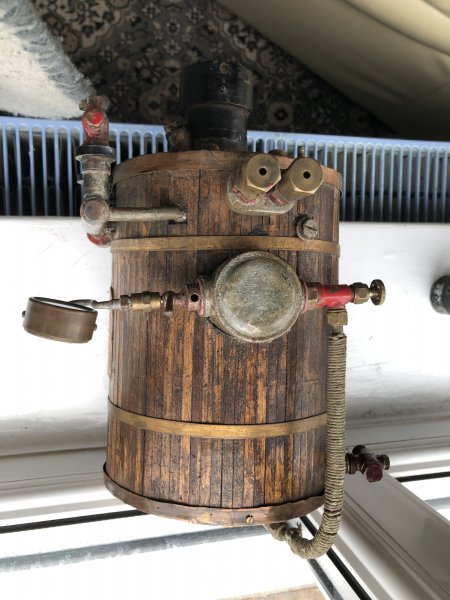 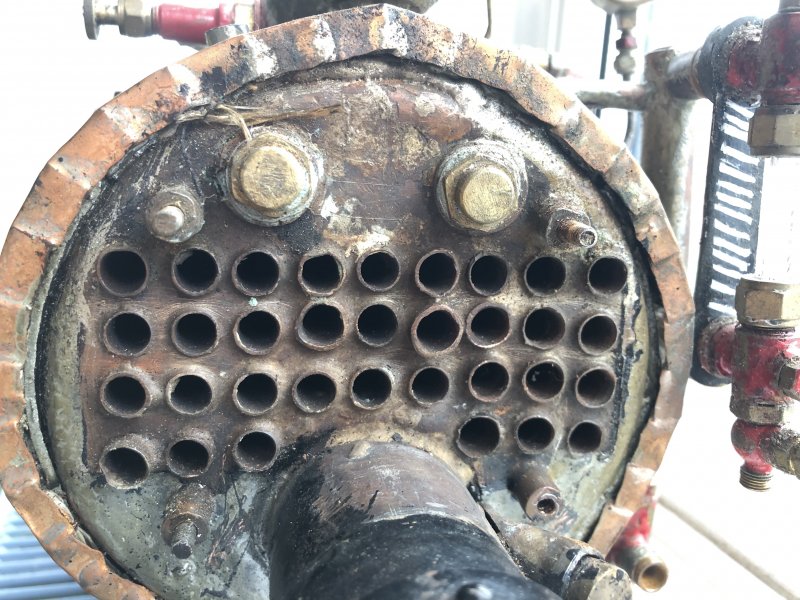 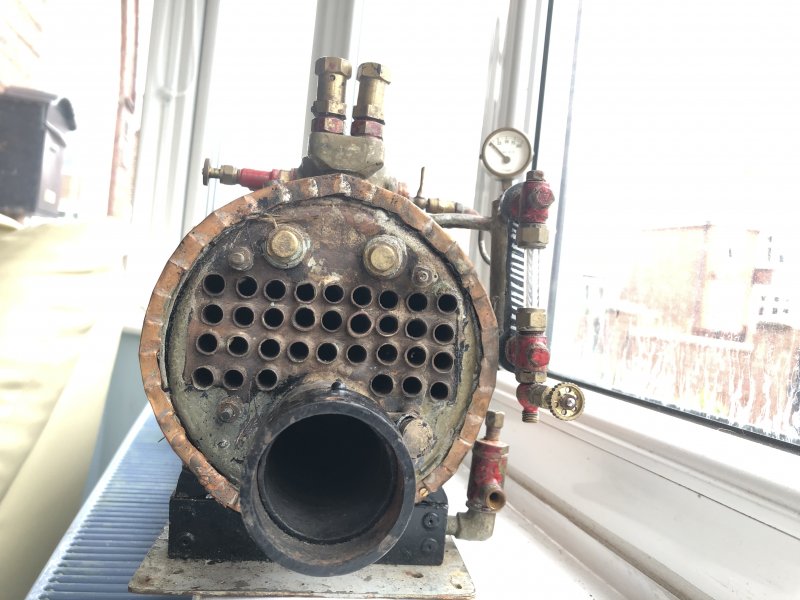 I picked up this nice old boiler about six months ago. I was going to tackle the restoration myself but decided against it as I do not have the equipment or knowledge to do a safe and proper job.

It is a gem in the rough for the right person. In my opinion it should be a straight forward mostly cosmetic restoration. The boiler core itself shown no signs of corrosion and is soundly built of copper.

The beautiful patina on the lagging shows it’s age, and should be preserved.

Here is the worst part: The paint on the smoke box is peeling and the smoke box itself is a little rusty on the surface, but perfectly usable if stripped, sanded and refinished. The smoke box door has s working hinge and latch.

The length over all including the fire tube and smoke box is about ten inches.

The outside diameter is about 5 1/2” length from edge to edge of lagging is about 7”.

The boiler core is about 5” in diameter and about 6.5” long. The boiler core looks well made of solid copper and had no visible problems. It has 33 tubes about 9/32” ID and a large fire tube tapering down to about 1.25” ID.

There is a space between the end of the actual boiler core and the copper rear cover where the heat turns around and heads back towards the front, that’s where there is a superheater built in. You can plumb the steam output to either use dry or wet steam simply by installing a valve to either use or skip the superheater.

It is heavy, weighing in at about fourteen and one half pounds!

The smoke box, stand and external fittings are in various levels of disrepair and will require the most attention. Again the boiler core including the tubes appear quite sound.

This is a nice project for someone who wants a solid boiler and has the knowledge to go about safely restoring it.

I am asking what I paid for it six months ago which is £250. I will ship anywhere in the U.K. for free.

My many unstarted projects and my lack of boiler making experience and tooling is why I am passing it on to someone who will return her to her former glory.

Someone called me and asked how thick the copper that the actual boiler core is made from.

I measured the only exposed edge which is where the steam domes cap is silver soldered on it is .125” thick, which is quite heavy.
Last edited: May 19, 2019

Another question he asked on the phone was:

Is that solder around the bottom of the front of the boiler and around the edges of where the smoke box fit?

The answer is: No, it appears to be some sort of gray hard heat proof sealer that the builder used to seal the smoke box to the front of the boiler.

It looks ugly but is not structural at all.

Is there anywhere you can get it pressure tested? A good test would make this much easier to sell.

kvom said:
Is there anywhere you can get it pressure tested? A good test would make this much easier to sell.
Click to expand...

Thanks for the response.

Yes I could. It would mean making or buying the various plugs needed and either rigging up a pump and gauge or taking it to someone who can. If I go that far then I may as well keep it.

I bought it because it is a really nice piece of work by someone had done quite a long time ago, and worth restoring. One of those things I really was not looking for at the time but that needed saving.

Heck the price I am asking would not even buy the materials.

I’m just trying to give someone a fairly easy project that will yield a really nice piece to be proud of.