I’ve been toying with the idea of printing an engine frame for the Tiny. In looking at the various filaments available I ran into PAHT CF15, which would seem to have most of the qualities required of that purpose. It can handle 150C continuously, with a peak of 180C and is stiffer than most.
I guess the main variable is the operating temperature of the Tiny and I wonder if the cylinder temps can be held at or below 150C. I suspect they can with enough water cooling.
Any thoughts on this topic?
Harry 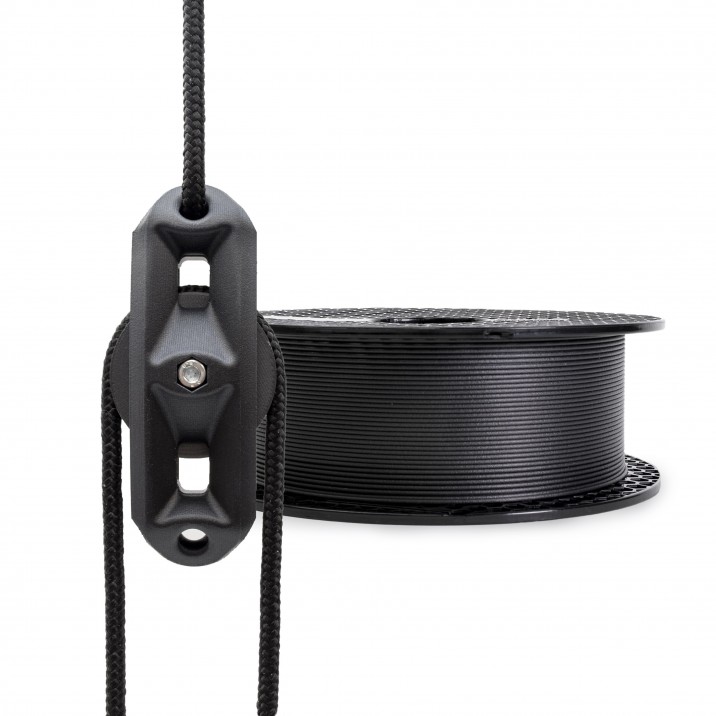 I think this stuff would melt with permanent contact to a cylinder.
Harry

I think you would be OK with temperature. Consider that the fuel tank on TINY is bolted directly onto the frame with only a gasket insulating them. As the lighter distillates of gasoline starts boiling at about 100 degrees F (38 degrees C) the fuel tank temperature cannot rise too mulchl abouve this before fuel problems start. Probably 150 degrees F.
I would be concerned about the gasoline attacking the frame chemically however as the bottom of the frame is also the top of the fuel tank. Many plastics do not get along well with gasoline. Probably a PTFE gasket covering the entire bottom of the frame would be adequate protection.
Gail

Thanks Gail, hadn’t thought about the effect of gas on plastics. And I guess a gasket would require a different venting option. Might be worth a look when my printer arrives and I complete a drawing of the frame.
Harry
C

I have done something not overly different. What I did was not what you have tried, but may be of interest to someone...

A number of years ago, I purchased the casting and plan set from myFordBoy for his steam engine. At the time I didn't have a lathe an so the kit just sat on a shelf. Since then, I took it out and started to look at working on it. I now have one of the cheap Chinese lathes, but do have a good set of tools for 3D printing and a fair amount of experience in using them. So, my thought was to transfer the plans to Fusion 360 (which I am fairly experienced with) and print the parts first in PLA. This has actually worked out fairly well. Once all plans were implemented in Fusion 360, I was able able to print each part and assemble it and verified it did work using air pressure. Obviously this method would never work for use with live stream, but I doubt I will ever use live stream.

Since when I implemented the plans in Fusion, I made sure they were at the same scale as the original, I should be able to swap out each part, one by one, as I machine them in Brass. So the end result is a 1-for-1 replica of the original 3D printed plus the a working Steam Engine as designed by David.

I seem to recall that both PLA and PETG are resistant to gasoline, but ABS is not. However, don't take my word / fuzzy memory for it ... please apply a liberal helping of salt!

Hey Craig, love what you’re doing! My journey started almost the same way with my wife giving me a Bob Shores Little Herc casting kit. With little experience on my Sherline equipment I started trying to gain enough experience to handle the Herc. I built several air engines and a stirling and am now trying to build the Tiny. I recently made a fatal error on the frame and am looking at restarting it. That’s where the idea of building up the frame with a heat resistant plastic came from. So I ordered a 3D printer that is supposed to arrive today and started learning FreeCAD. I’ve been eyeing the wobbler air engines on thingiverse so that may also be in my future. I kind of feel like I’m burning the candle at both ends but am enjoying the journey.
Harry
R

Here's a nice tutorial on using FreeCAD. It's 1.5 hours long but the first 20 minutes will get you a good start.

I started this one but moved on after a while, it’s actually 2.5 hours long. I’m now at the point where I understand much more so maybe I’ll take another run at it.
D

Be sure when you print the parts that you allow for shrinkage as the plastic cools. Otherwise your printed parts, and your machined parts will NOT be a 1-for-1 exchange.

Be sure when you print the parts that you allow for shrinkage as the plastic cools. Otherwise your printed parts, and your machined parts will NOT be a 1-for-1 exchange.
Click to expand...

I have only been using PLA, but the amount of shrinkage actually varies from one brand to another. I have standardize on one specific brand (but have even notice variation from one manufactured lot to another, but at least that is minimal). A nice thing about 3D printing, if something needs to be tweaked slightly, you just print it again. Some of the parts were much more critical than others. For example, the piston valve was much more "touchy" than the crankshaft. I'm sure I have printed every part at least a couple times.

I go through a lot of rolls of filament. Its fun because both my wife and I are into it. Her designs are more "artsy-craftsy" oriented, like gifts for the grandkids. while mine are more mundane like containers or tool holders.
D

I totally agree on the difference of shrinkinge between brands. I've got a roll of red on one printer that prints close enough to actual size when scaled to 103% for printing. I've got a roll of blue that's a different brand on the other printer, and it needs to be scaled to 104.5% before it's close enough. When you're printing small parts allowing for shrinkage isn't as important, but on the bigger parts the error REALLY accumulates.
C

It's not the best brand out there, but my wife and I have settled on Hatchbox from Amazon. We have had so many types of filament that have caused clogs on our Sidewinder X1, but it seems to handle Hatchbox the best. Our Ender-3 V2 seems to handle various brands better. As you say, on bigger prints variations can really add up. Since the X1 has a 300x300x400 footprint, we use it for our larger parts. But that means there is greater opportunity for clogging.
D

That's the same size as my MP10, the printer with the blue filament. Mine's a Monoprice, so it's probably a rebadged clone.

I haven't used it in a while, couple of weeks, and I noticed that the filament has snapped off at the extruder. I had a spool of red that did that too if I wasn't using it often enough. If I didn't use it at least every other day the filament would snap between the spool and the extruder - it was a PITA until I got that spool used up. Never had any problems with that spool whille it was printing though.
C

My biggest complaint with the Ender 3 V2 is the Bowden drive. Both my wife and I like the direct drive extruder. However, she seems to be convinced we need to keep the extra large footprint. Lately, she has zero in one the new Creality 3D CR-10 Smart Po which does have the direct drive. Not available yet from US distributors, but is suppose to be later this month. Everyone needs three printers, right?

Sorry, I now realize that we are high-jacking the original thread. Maybe there should be a separate area for 3D printer as they relate to model engine building.

I bought a direct-drive extruder to replace the Bowden tube extruder on my tronxy 3-D printer. Cost less than $40 and works like a charm.

Something to consider on a larger format 3d printer is switching to a larger nozzle. You could go all the way up to a "volcano" style with a 1mm nozzle, but if your current nozzle is the typical .4mm, consider switching to a .6mm. You will likely be able to use your existing extruder - it should be able to provide enough heat - but you will cut down your printing time by a fair bit.

I printed a top for an Upshur twin and it works well but I don't run it for very long at a time. I have also printed name plates and painted them to match the engine, putting them in the sun for the paint to dry on a hot day will deform then quite badly. 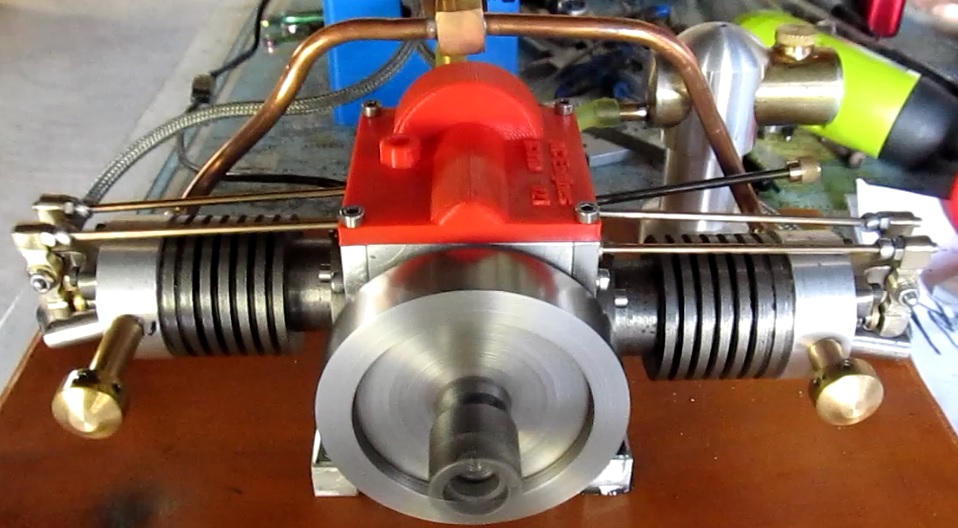 My sons gave me an Ender 3 V2 for my birthday in April, and I don’t think it’s been off more than a dozen hours since I got it. What a hoot! I’ve been printing gears in PLA to experiment with, and when I can get my experience level up to where it should be, I’ll try moving over to Nylon for its toughness in this application.

Im new to 3d CAD, and I’m attempting to learn FreeCAD (loyal Mac user), and I think I’d like to try and draw/print Elmer’s Geared Engine in ABS, PLA, and of course Nylon for the gears.

Anybody got any words of wisdom to share with a newbie 3D printer addict?

John W
You must log in or register to reply here.