As you may know, I've been more busy outside the shop than inside it because of
family adventures and illnesses.

I've been working on several projects for quite a while now, and it's probably time to turn some bits and pieces into threads. I also bit the bullet and started paying into Photobucket so I hope you can see my photos.

One of the decisions I made a few years back was to continue using the 7x MiniLathe and to work to make it better, despite my desire to find another lathe.

As it stands now, it looks a little strange with some of the modifications in place, but it is definitely better in operation. 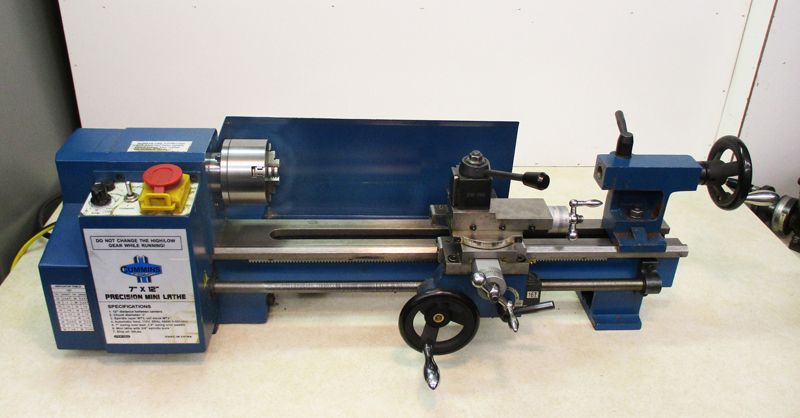 For others with one of these, I'll include some history of my choices.

Before starting, the bed was "bellied" due to a poor casting, and the controls were getting erratic. The 3-jaw chuck was badly eccentric with worn jaws, but I really liked having it installed most of the time..

Since I'm in the USA, I took advantage of LittleMachineShop for some, but not all, of the parts. I have to be honest to report that I started before COVID, so supply was good and prices had not risen. (And I have to add the disclaimer that I am not related to LMS other than as a satisfied customer.)

I started with the 16-inch bed extension, which was supplied with not only the bed, but leadscrew, gear rack, and other parts.

The bed arrived in red, but a cross-reference chart for colors to match the other brands is supplied. I used a Ford color to match my "Cummins" paint scheme. Before painting, I masked the ways with layers of duct tape and knocked as much scale and roughness off the rest of the casting and sanded non-critical surfaces as well as I could. After sanding, I removed that tape, cleaned everything with solvent and remasked with masking tape for painting. The goal of all that was to provide fewer places for chips and dirt to stick or hide. I waited several days after painting before assembling.

I also ordered the parts to convert all the leadscrews and dials to solve the mini-lathe's unusual calibration and convert to a standard .001 inch-per-increment. I debated using the metric parts instead of the US ones, but I decided to stay with inches. 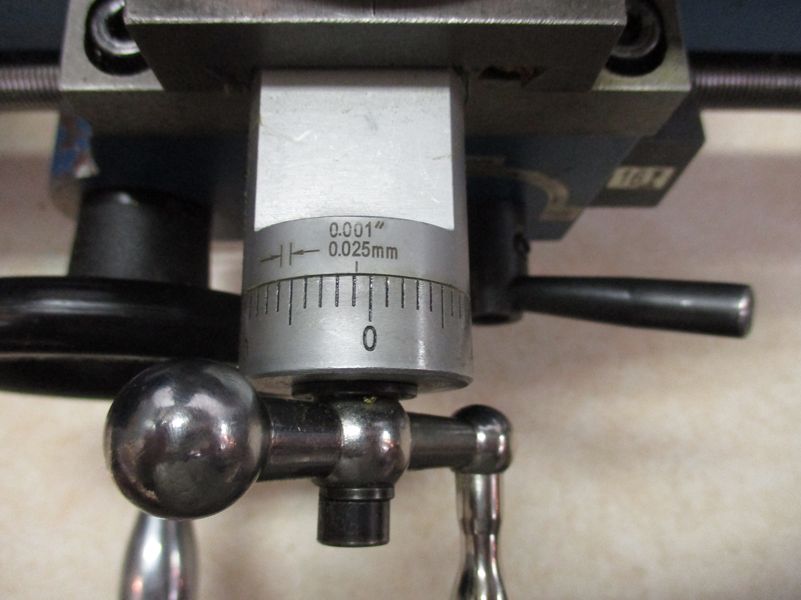 I replaced the headstock bearings with tapered roller bearings. If you contemplate this, there is a bushing that needs to be replaced or modified as the bearings are axially larger than stock. I ordered the bushing. On reassembly, I replaced the main drive gears with metal gears, but I decided to keep the plastic change gears to save money. This was pre-COVID, so one could buy quite a few replacement gears for the money the metal ones cost. I did buy a few replacement gears, and I also bought a 21-tooth gear that they sell to make better combinations for metric threading, which I do from time to time.

In a previous upgrade, I had scraped the saddle, so I made sure that that was still OK. I added tapered gibs this time, and it was an improvement over the shims I had used previously. 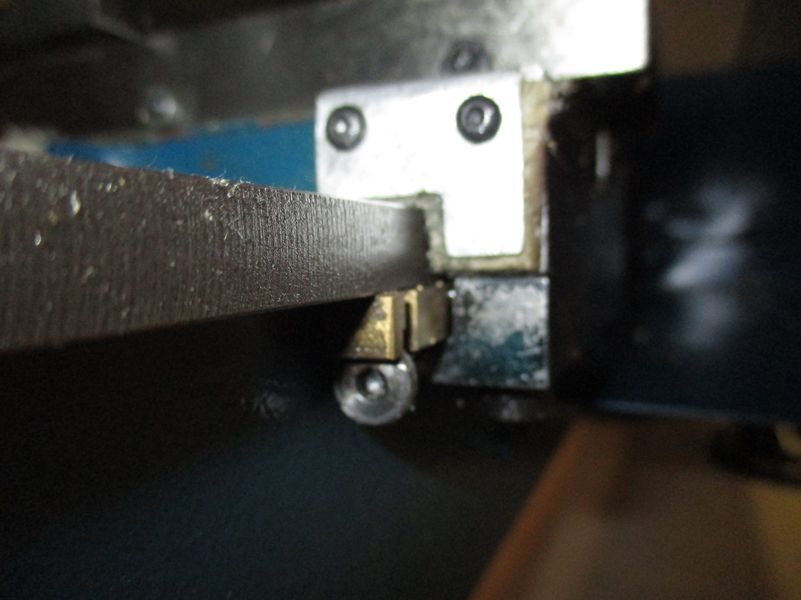 I also added way wipers this time, making the covers for them from aluminum sheet and using pieces of the felt that can be salvaged from old inkjet printers. 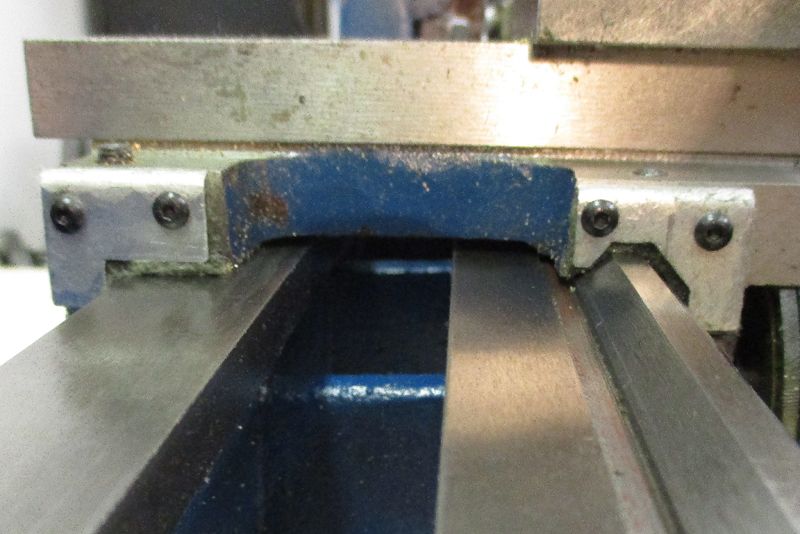 In mounting the way wipers, I found the casting for the saddle to have some hard spots and voids where I wanted to put threaded holes, so screws don't quite line up. I decided to live with it, but I came close to buying a new casting.

My lathe has always suffered with an inconsistent engagement of the half-nuts, so I scraped the dovetails where the bracket rides and tried to improve the small gib it uses. I also made a better retainer and retapped the screw holes and used new screws on reassembly.

I had previously lapped the dovetails and gibs on the compound and cross slides, but I worked on it again, and checked the alignments of everything very carefully.

I had earlier rebuilt the mechanism used for the tailstock advance and installed a new handwheel. This time I replaced the main saddle handwheel with a similar one. It so nice to have a handwheel run true and a larger handle to turn it. 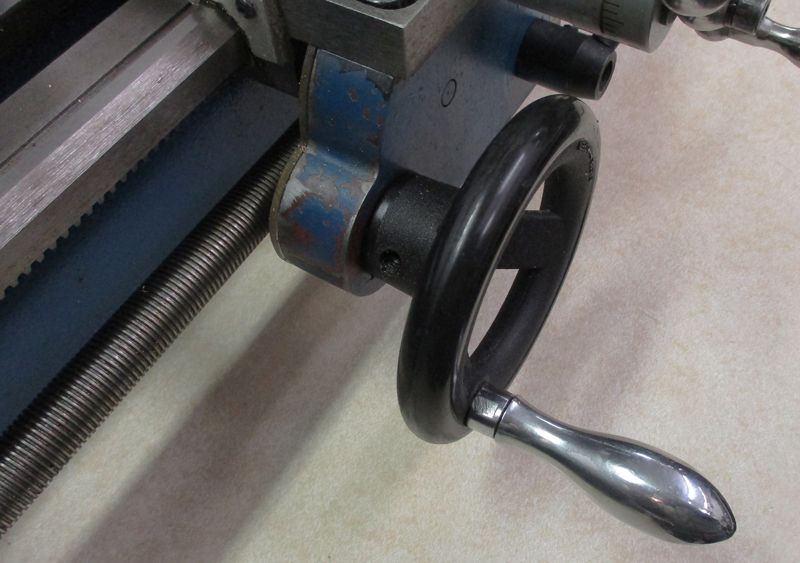 I have the lathe mounted to its stand, so before putting it back in place I releveled the stand and checked everything carefully. It is mostly just held in place, not tightened down. This is because I don't like chasing machines around on a tabletop.

To complete this round of changes, I bought a Bison precision 3-jaw chuck. It was over $350.00, but it was worth it. Centered up on the spindle with a test bar and dial indicator, it is below 0.001. 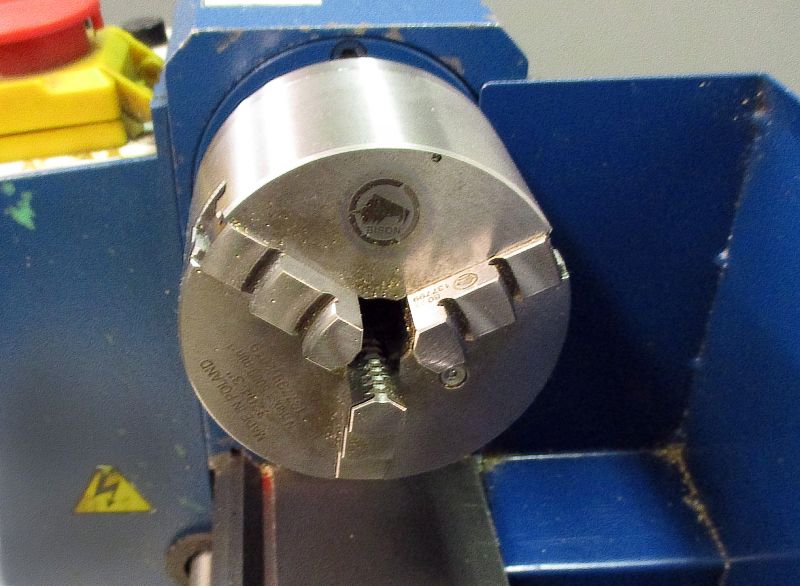 I'll close this post here, and come back with some accessories I have added and some further upgrades I may do:

Some things I have done that are not direct modifications, but useful:

QCTP: OXA size. I have made extra and special toolholders and plan to make more. 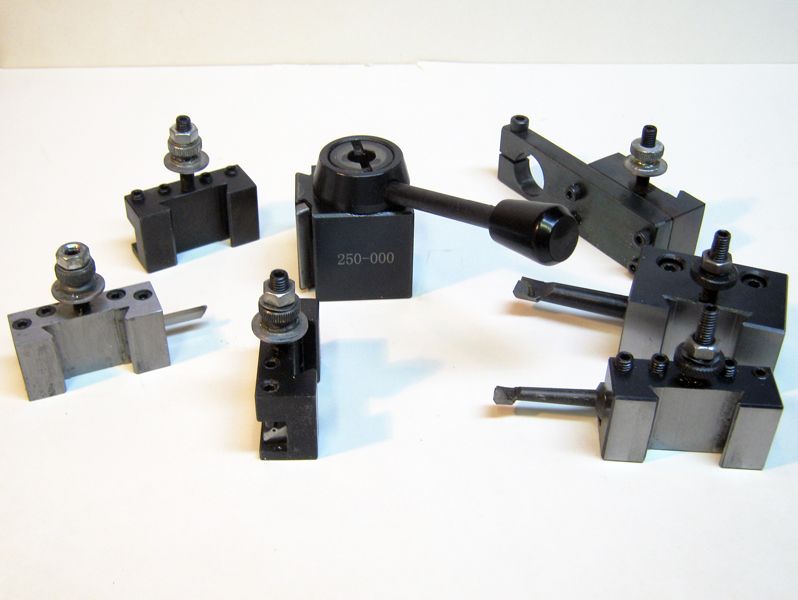 Drive accessories for between-centers turning and use with faceplate. 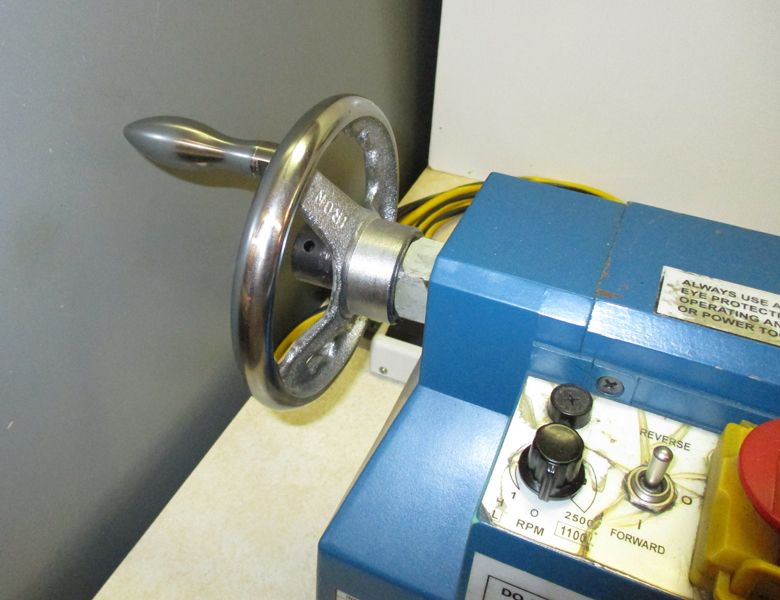 Ball-turning attachment: A perennial project on these forums. 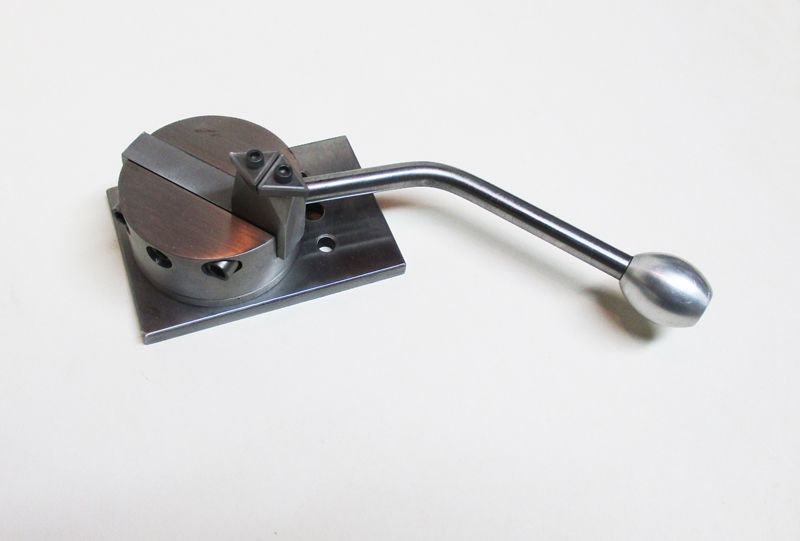 ER-25 collet holder and collets: It was a sale special a few years back, and works very well. As a test, I was able to turn pieces from plastic ball-point pen fillers. The disadvantage of this particular collet holder is that it does not allow stock to go through the headstock. 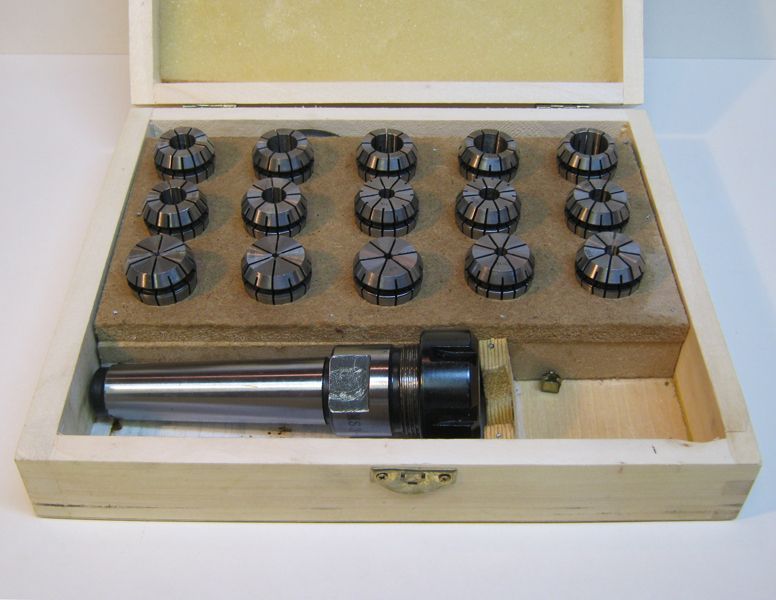 I also have MT-3 collets for holding a test bar for alignment testing. The fewest number of parts in the setup should make the tests more accurate.

At this point, there are still some things to consider:

Additional screws on the compound and cross-slide gibs. Maybe pin the gibs. I bought the screws, but did not do this yet.

Purchase all the metal gears.

Convert the tailstock to lever-lock from the stock version. I am "on the fence" with this because I sometimes find the wrench-tightened adjustment sliding down the ways and I wonder whether the lever-lock would hold as tight as the nut.

Build a better steady rest. The stock one is very clumsy to install and remove. I think I want one that can be installed without undoing the tailstock center and that has a better securing means than the existing nut and stud.

Motor Upgrade. Probably only if the existing motor fails.

When I bought this lathe several years ago the cost of these machines was around $400.00 and this one was on sale for about $350.00. I spent extra cash back then on a 4-jaw chuck and a milling attachment. I worked without a mill for about a year and was successful that way. In inflated COVID prices, the current version is priced from from $950 to over $1000.00.

The other machines I was considering at that time were the 9X19 lathes and TAIG and Sherline. The 8.5 inch lathe with powered cross-feed was not yet available. The 9X19 could not do left-hand threads and had some other issues I did not like and I wanted screw-cutting ability and more capacity than TAIG and Sherline offered. I chose the 7x because I thought it had a comprehensive list of features I could use to learn things I wanted to learn. There are also enough of these lathes out there to have a support base.

I have got what I needed from this lathe and I have definitely learned a lot about fine-tuning lathes in general (As has been said, "Consider Them a Kit" )

By continuing to adapt and modify this lathe I feel that it is now brought up to my abilities and it is still small enough to move if I move and also large enough and featured enough to do a lot of the projects that I want to do. Parts are available and not unduly expensive. Nonetheless, I have invested lots of money and time in this lathe.

I do want another lathe or two to fit all the things I want to do now, but the little 7x can still fill a few needs as I work in those directions.

Could I use another 7x? Maybe? I have considered getting another one and making it metric (I know that may be crazy in the USA, but I live happily in metric in a lot of cases and it might be fun.) I have also considered adding the 8.5-inch lathe, or the 9X19 and adding one of those to my complement of machines. My true desire is something 12x36 or larger with quick-change gearbox and D1-xx chuck mount. Unfortunately, I don't have the shop space or the electrical capacity for something in that range.

Whatever I add to my machine collection, I'll post it.

Thank You for Reading.

Location
Woodstock On Can

Shop shoe: It's too bad you don't have the room. After many years of adapting to my old SB Heavy 10's faults and wear I finally bit the bullet, re-arranged my workspace and got a generic 12x36 in Mar 2021. Mine is a King but identical to Grizzly. Had a Q.C. box on the old S.B but the gearhead and D1 headstock and 2H.P. metric thread capability plus unworn ways make this a treat to use. Well worth the price and the work to dismantle then re-assemble in my basement shop. When I'm gone and the house is sold the lathe goes with it!
Colin
You must log in or register to reply here.