bruski said:
Line boring the main bearing caps has been at the limits of my equipment on hand. I first ball milled the three center bearing webs and caps with a one inch ball mill to a depth of .460. Then installed the caps and cobbled up a way to attach the block to a face plate on center. My plan is to line bore the three center webs with a boring bar that can reach the first two without any problems but the third one is out of reach. I planned on unbolting the block from the face plate and flipping it around to get the third one. But it took so much time and effort to get it all running true and centered that I would prefer not to do that again. So the setup will stay like it is in the picture until I either make a longer boring bar or come up with something else.

One method I saw on U-Tube was to bolt the block to the cross slide. You need to make up a boring bar with bushes on the ends, which fit the block. The boring bar is then driven, via two universal joints, by the chuck. It's not that difficult, because the holes in the block doesn't need to be at centre height. The saddle is then moved along to bore the holes.

Saves hours of polishing, grinding, shaping - parts can be made to exact dimensions before heat treating without fear of dimension change from ...
www.brownells.com
J

That's a neat Valve Grinding set up. Is that part of Steve's plans? or found elsewhere? Can anyone send me a link to it? ( Steve is a friend and a member of the MDMC group... great guy)
B

HI Joseph,
You must be referring to the cam grinding setup. I built that so many years ago from an article in Strickly IC magazine. I will try and find it but it might take some time to do so. Try a search for back issues of that magazine and there articles on cam grinding and see what comes up for you.
bruski
B

I am still alive here. I managed to assemble all of the pistons with there rings onto the rods and have them in the cylinders now. I have been seating the rings by running the bottom end in the lathe with oil in the pan splashing to lube everything for now as there is no oil pump on the block yet.
The pictures are of the timing gears with the idler gear not shown in the picture. It has two ball bearings in it. The other picture is of the rocker arms being machined in the first stage of there shaped profile. I will be using a .25 drill rod running through them for mounting with the pushrod seat screw as the adjustment with a lock nut on top of them. 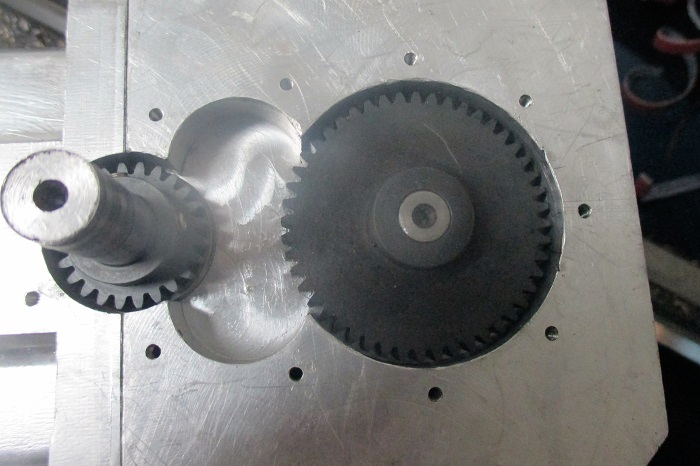 It seems a lot of people use a similar method to you when 'seating' rings but industry suggests it is the opposite of what you want to do to actually get a well sealing ring. The combustion pressures are required to get the rings to 'bed-in' and wear into a good seal. Here's a couple of links if you want to read about the theory LINK LINK.
B

Thanks for the information, there is always room to learn in my head.

Interesting build, love the idea of a 2x demon v8. Have you any plans as to what to do with the model once you've completed it?

stackerjack said:
One method I saw on U-Tube was to bolt the block to the cross slide. You need to make up a boring bar with bushes on the ends, which fit the block. The boring bar is then driven, via two universal joints, by the chuck. It's not that difficult, because the holes in the block doesn't need to be at centre height. The saddle is then moved along to bore the holes.
Click to expand...

Thanks Stackerjack. Rarely is this method proposed on threads like this.
This is mathematically and technically the correct way to make a parallel bore. Simply, you are describing a circle with the tool and progressing the circle along a straight line of the axis of the bore. The way it is always done in industrial manufacturing.
Personally, I simply mount the block where the tool post would normally fit, and use a boring bar -central tool - mounted between chuck and revolving tailstock.
Or I mount a boring bar (end cutter) in my miller-driller and progress the cut vertically down through the engine block, which is mounted on the cross table. Easy!
Enjoy
K2
B

Jimmy,
I don't have any plans for it in a project, it's something interesting to keep me busy in my shop and out of trouble.

I've got several plan sets for various engines to start, whichever i end up doing is like to build a suitable vehicle for them, ive seen some superb rc cars with V8 motors in them but not one as big as yours, Should be a right beast indeed when it's finished!
You must log in or register to reply here.
Share:
Facebook Twitter Reddit Pinterest Tumblr WhatsApp Email Link