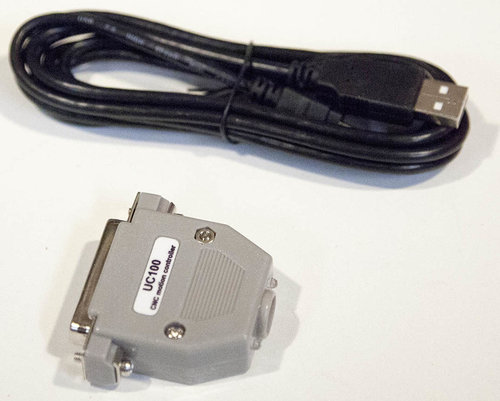 Well it happened. My old PC with a parallel port lost its magic smoke and died. I was expecting that to happen so I had backed up my Mach 3 program a while back so I wouldn't lose the setup for my CNC router table.

Not wanting to spend a lot of money I opted to try the UC100 parallel port adapter (motion controller) for a USB port. I have been saving an old PC-64 bit with Win 7 installed for this purpose. I bought the UC100 from Amazon and found the software to install it here http://www.cncdrive.com/UC100.html

The UC100 should work on all windows versions from 7 thru 10.

To set things up correctly you must install Mach 3 on the new computer and then copy the original Mach 3 directory from your old PC over the Mach 3 directory on the new computer. That will transfer your license and setup files. The License must be valid. Only then can you install the UC100. Load the UC100 Installer and a popup screen will let you load the drivers and the plugin for Mach 3. The first time you load Mach 3 a popup screen will prompt you to select the port, select the UC100 port. Your now good to go. Actually if your old PC is as old as mine was you will probably need a new keyboard and may need to setup your hotkeys. And you may need a gender adaptor for a parallel port. Total cost was $135

I used one of them once and it worked.. It was quite a while ago but I do remember using it ..The computer I had died and I could not find a parallel port computer at the time so I bought one of them and put it on a laptop.. Now I just go with Mach4 and a compatible board.. I had used a smoothstepper on my last CNC router build with Mach 4 and that worked well. It seemed at least for me a bit of a headscratcher to hook up..My newest CNC mill build uses a Hicon Integra board which is easy to hook up but is not cheap.. I guess what I am getting at is I got away from the parallel thing which I always thought was the way (you know old dog new tricks) but finally gave in and went with the newer stuff and now I find that is the way...I am not telling anyone what is best, just sharing...............

joerom said:
Now I just go with Mach4 and a compatible board..
Click to expand...

In the long run that is what I plan to do. What I needed now was something simple and cheap to get me up and running quick.

on amazon? if it is a clone it will surely not work, you need the original UC100 combined with mach3 with serial number.
T

joerom said:
... I guess what I am getting at is I got away from the parallel thing which I always thought was the way (you know old dog new tricks) but finally gave in and went with the newer stuff and now I find that is the way...I am not telling anyone what is best, just sharing...............
Click to expand...

One option for other older dogs that is overlooked often.
To put a cheap PCI-(e) parallel card into the computer can often solve the lack of a built in port.
I added a 2nd card to the linux CNC computer and it was not particular difficult to get it up and running.

In my opinion USB is too unstable for this kind of task. (opinion based on dangerous half knowledge and hearsay )
USB is just not for me.
"Do you want to restart your computer, now? In an hour?, or another (now) time?" Does also not belong near any machine tool. (opinion)

I also have the real UC100 and it does intermittently come up with, "UC100 not responding" and this seems to require a re-start of Mach3. So something more stable would be preferred. A PCI card would not work in my case as my cnc lathe runs on an old laptop.
When I do change to an old desktop, the PCI would work or as has been mentioned above ethernet seems more stable.
John B
S

I have 2 UC100, if they are original and also mach3 is original it works very well, and it is possible to use a pc with a usb port, the parallel port is an old system that is no longer used, with the parallel port the pc must be configured a lot well, with the usb port you don't need to do anything.

On a laptop , certainly the older ones , there will be one or two pcmcia expansion slots .
A pcmcia parallel card cost almost nothing , and it will work just like a pci-e on a desktop .
T

SPOTTER said:
I have 2 UC100, if they are original and also mach3 is original it works very well, and it is possible to use a pc with a usb port, the parallel port is an old system that is no longer used, with the parallel port the pc must be configured a lot well, with the usb port you don't need to do anything.
Click to expand...

Just curious: Did you have bad experience with "fakes" or are you deducting that your systems are working because they are original?
From my personal experience with Computer systems it seems often to be a matter of pure luck if a system works or not. (just rumbling! no trolling intended )

Parallel not used anymore, yes and no.

older system, yes. No longer used, no, I still use mine

. To be honest I thought of retiring it at some point too. The old PC died and I had to replace it. Some new Chinese machines still use it. (however a questionable practice).

I ended up buying three vintage PCs for about 90 USD plus 30 USD for some parallel interface cards.
One refused to run the linux cnc stable, one is running linux cnc, the third one is a ready to run backup. Just because I thought it is nice to have an independent experimenting system.

Mentioned UC100 seems still do use the parallel interface of the machine side of things or not?

I think it still can make sense to use a 2nd hand vintage PC to run Mach3 or Linux-cnc, if you do not want to touch the parallel interface on an existing machine, or if you got the PC for free because it was obsolete for someone else.

A 10 USD Parallel card can save an obsolete PC from junk pile. I found out about this option far too late, so I advertise it (maybe too agressive ). Not because I think the Parallel port is still going strong, but I think it is not quite dead yet as long as so many older machines are still using it and at the same time hardware can be found free of charge in many occasions.

Spending "big bucks" can safe time, but comes at increased purchase cost. If I debug my shitty controller, hate debugging controllers and do this instead of building my other projects. I am doing something wrong.

I think people tend to not value their own time enough.

If I debug a shitty controller, because it is part of my hobby to debug shitty controllers. Then it is fine O.K. and nothing wrong with it.
In that case I think a parallel ports system is an excellent starting point, because often you can get a free PC from obsolescence pile.

Cheap 3d printer controllers might be an option for the hunter of the cheap but amazing CNC hardware. Beware it might be only another way to learn the hard way, that it all seems to be: You get what you pay for.