Added the water jacket, and shelled the base.

I was wondering if I would be able to shell the base or not, and that was going to be ugly if I did not figure out how to do that, since that is how I will make the core for the base.

And the exhaust rocker arm is not horizontal, and slopes upwards to the exhaust valve from its opposite end.

The exhaust valve is over the intake valve, and so is above the centerline of the bore.

It looks like the large gear is offset a bit down from the smaller one.
I guess that would work.
I will have to compare that with the geometry of the gears on the Galloway, which I assumed had centerlines on the same horizontal plane. 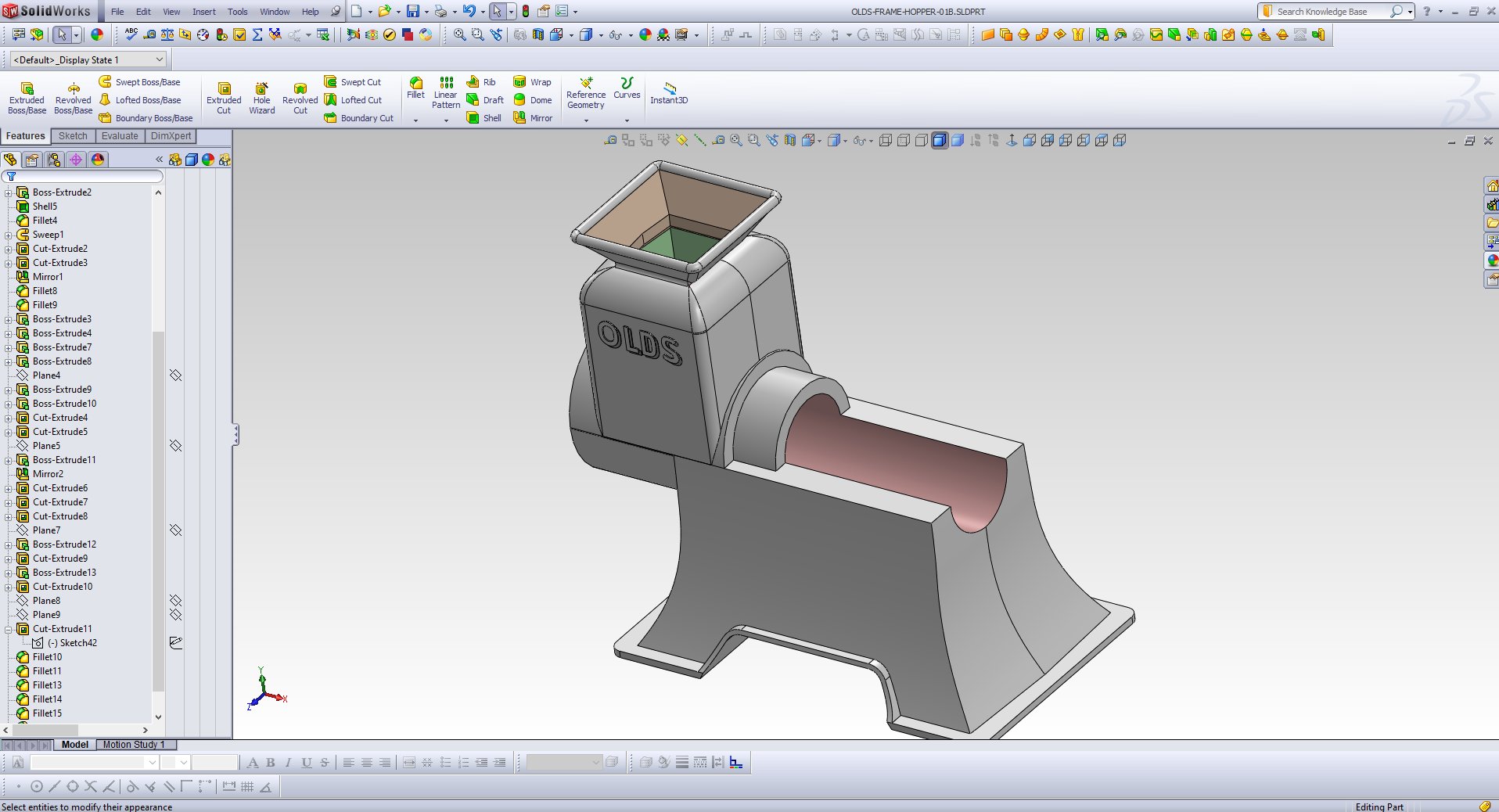 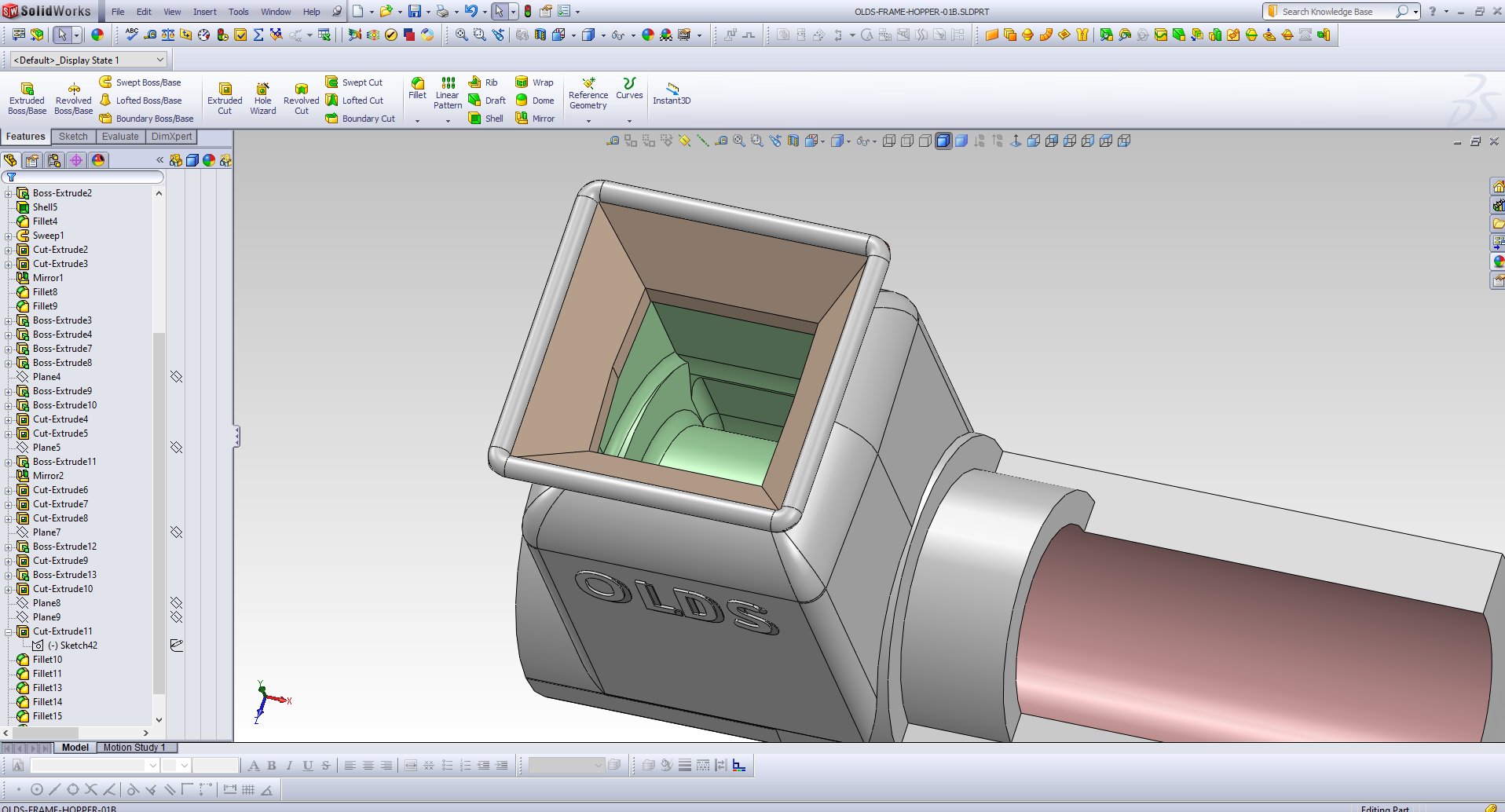 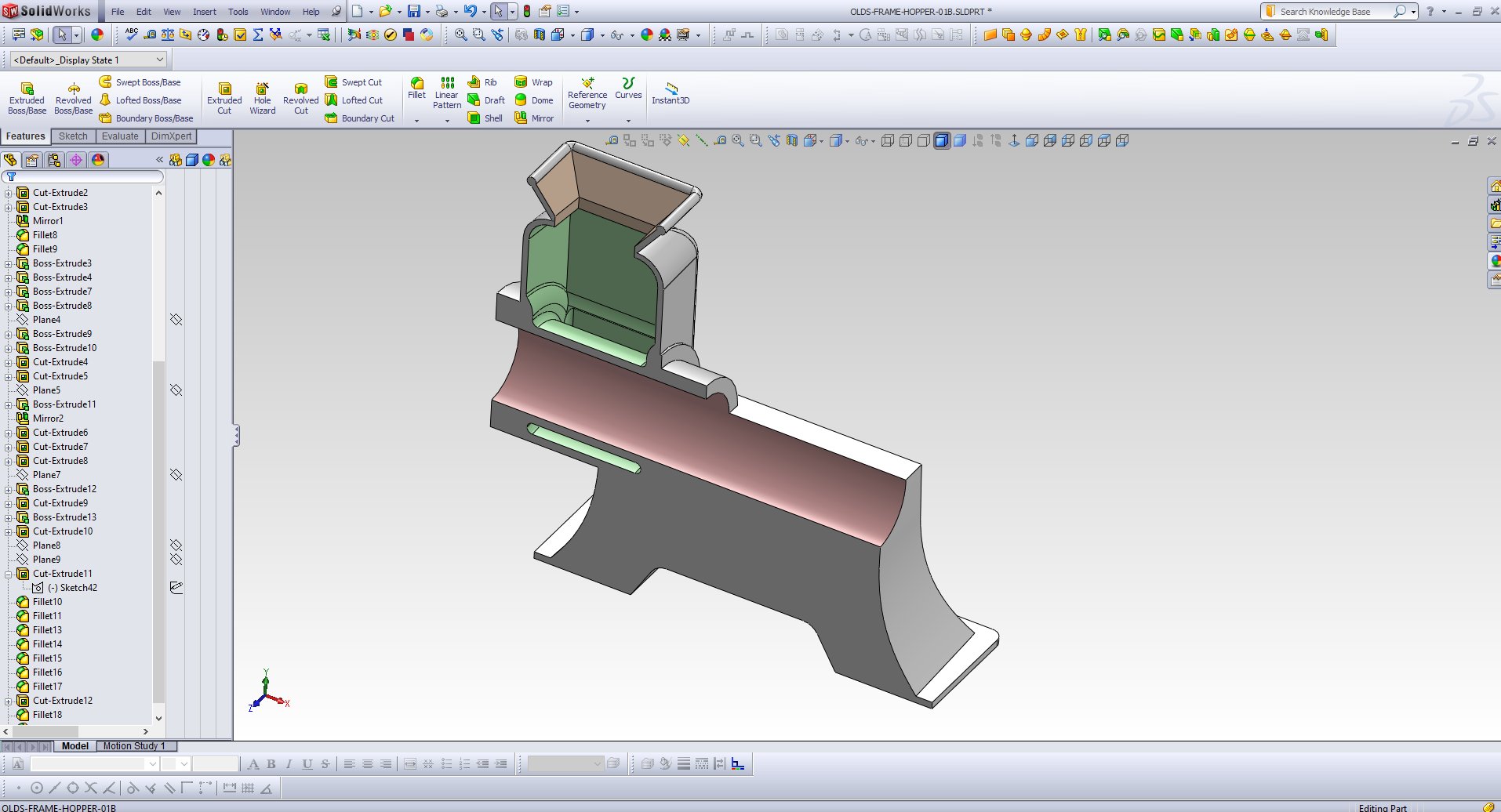 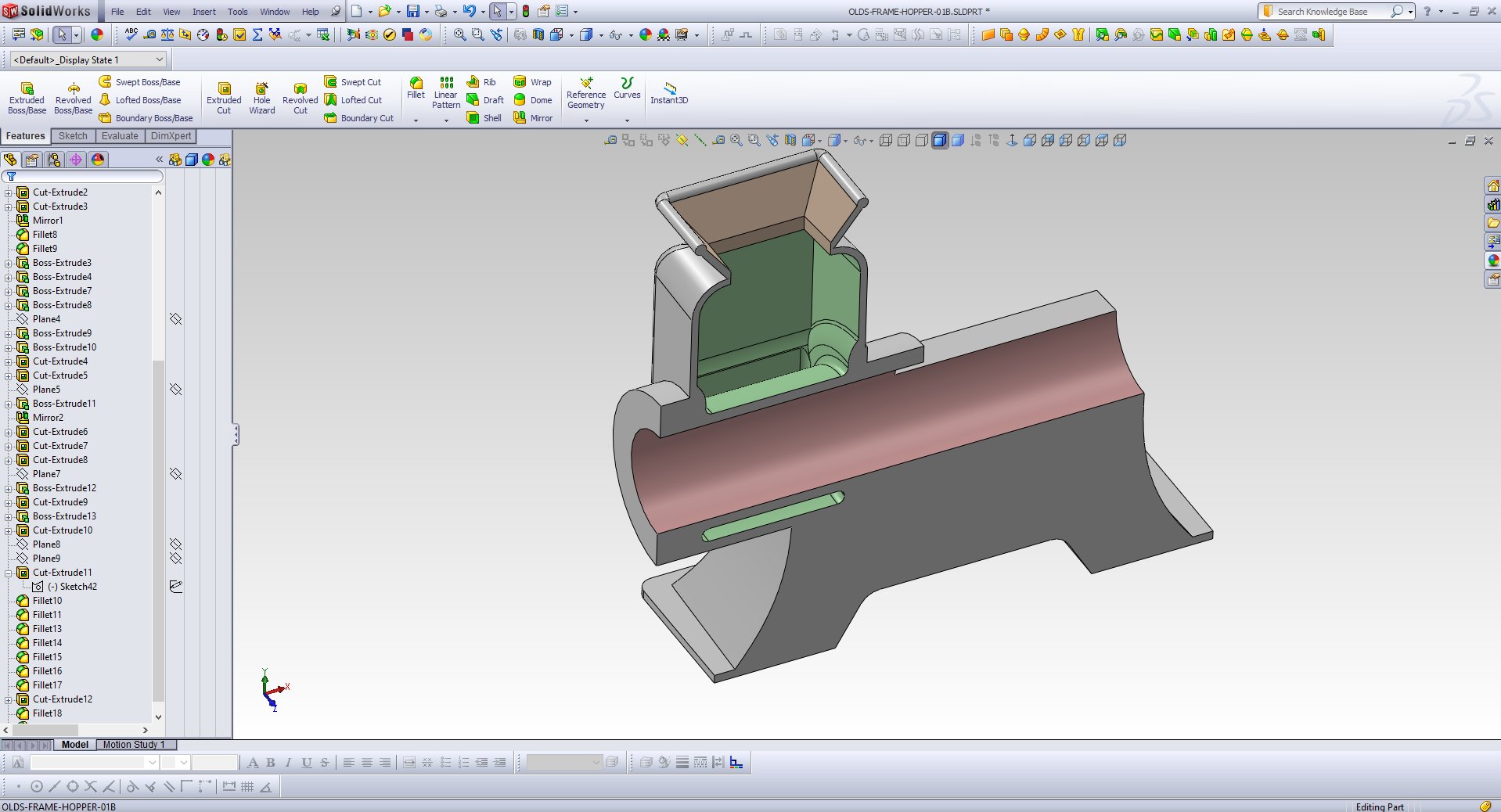 Looking back at the Galloway design, the gears are on the same centerline, which is also the centerline of the crankshaft.

The Galloway valves are left and right, beside each other, unlike the Olds valves, which are stacked one over the other.

The Galloway uses a bridge to reach over the top of the intake valve.

The Galloway design is definitely a better design, but I guess we need to adhere to the Olds design, awkward though it may be.

The Olds rocker arm slopes down I guess to get the right dimensions from the fulcrum point.

One can hardly wait to peek ahead at a rough assembly.
I will have to thin those gears up a bit.

Much remains to be done, but getting there. 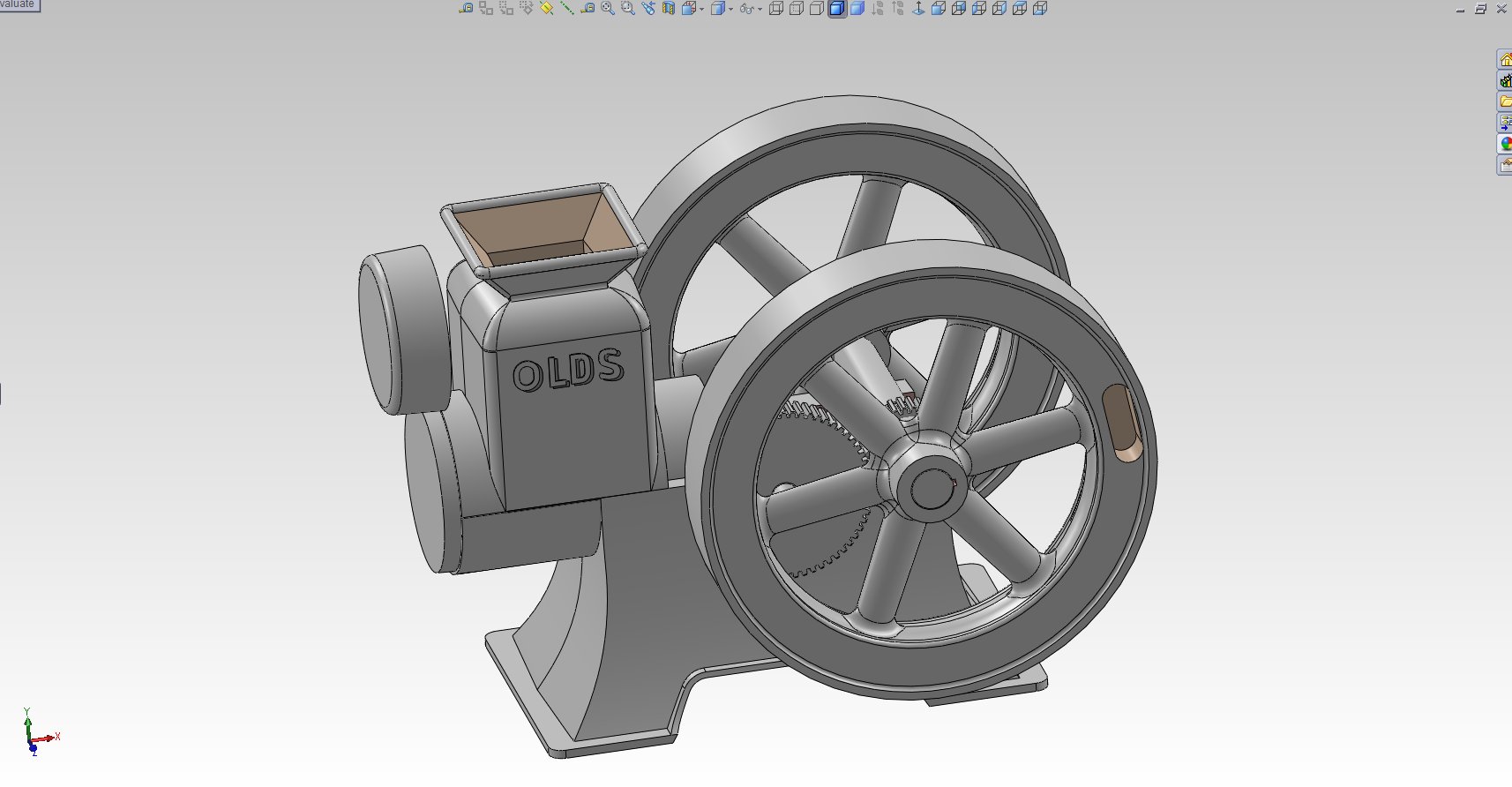 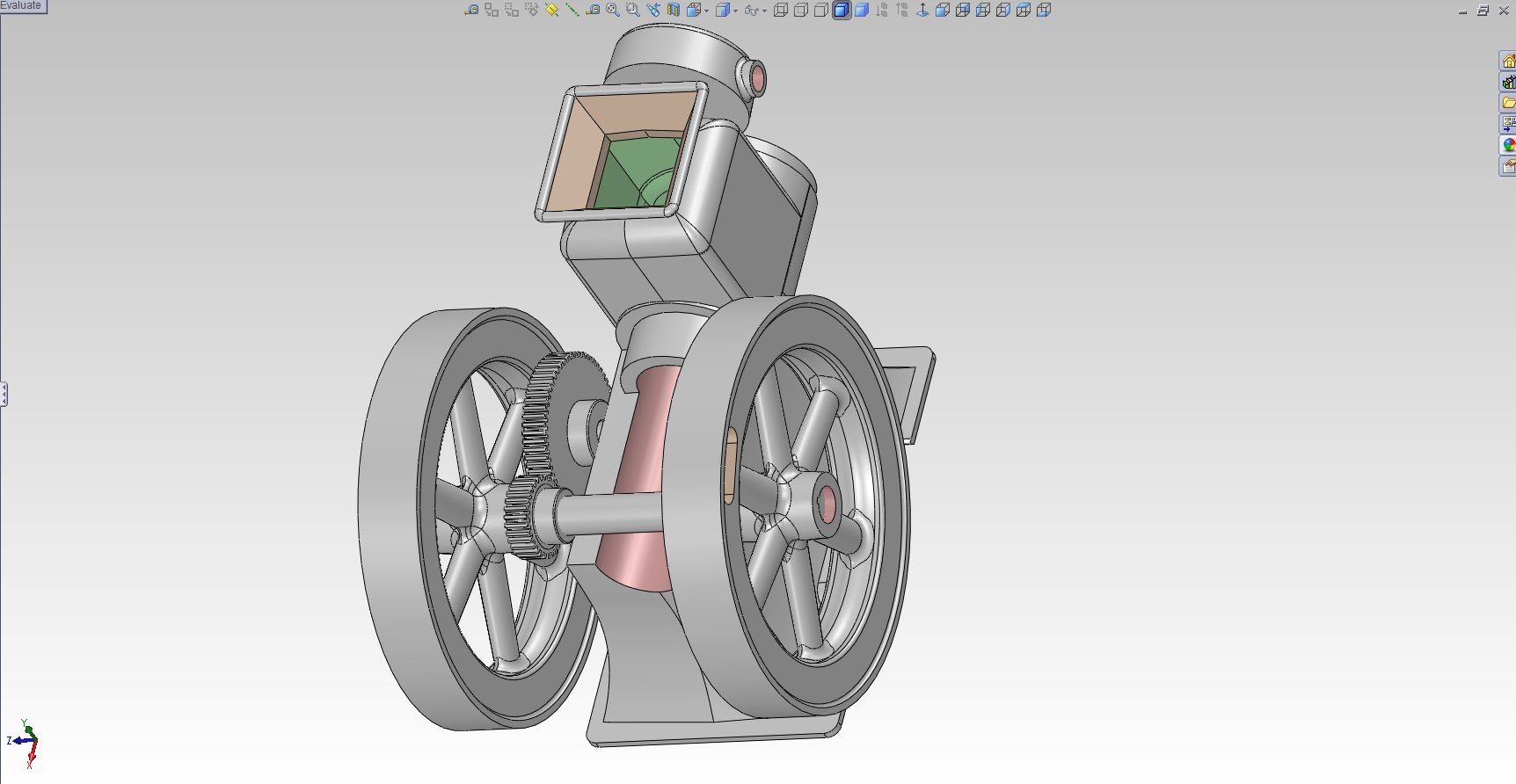 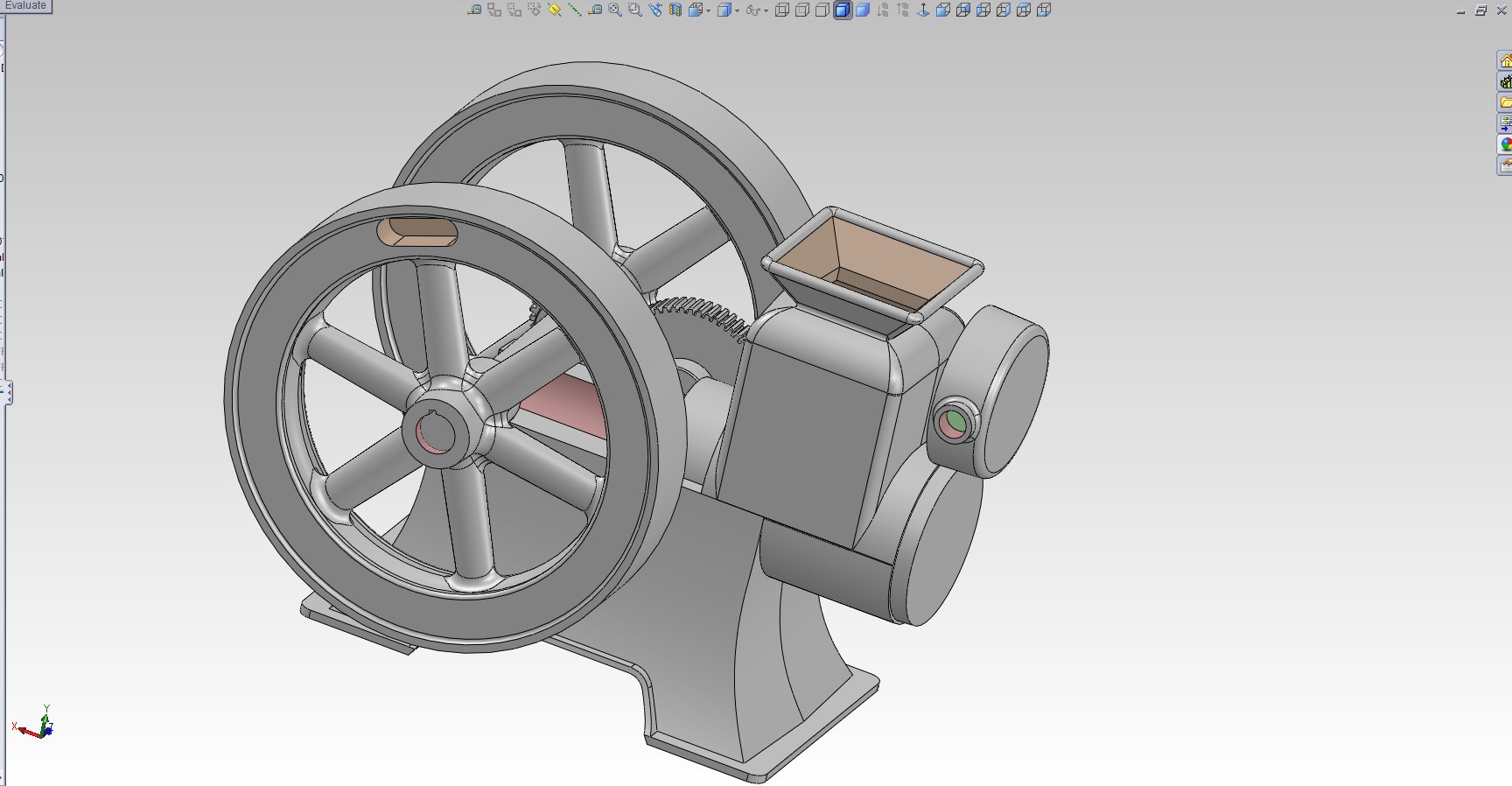 Just a thought. Morrisonandmarvin.com sell castings and have very nice plans for a small Lukenheimer carb. PM research also sells a larger version. I used the castings that came with my larger Olds for a Lukenheimer type carb, works good. I'm a fan of the design, just added one to my R&V.

Jasonb said:
pat, you could always treat yourself to some wax filament and print your waxes, saves having to make moulds.
Click to expand...

The trend these days seems to be to use "Polycast" filament in a "lost-filament" process, and the Polycast is suppose to burn out very cleanly (I have not tried it yet).

PolyCast™ is a filament designed to produce investment patterns for investment casting applications. 3D printing significantly cuts down both the cost and lead time by eliminating the tooling process. How to use PolyCast™? You can download our application note here. Printing and Drying Settings...

The drawback to the investment casting process is that the ceramic slurry supposedly has a relatively short shelf life, and you don't want to let it freeze either.
Investment castings is a multi-step process, and very involved (too involved for me).

I think a viable alternative to lost-wax/filament processes may be to use bound sand for cores and molds, with a ceramic mold coat.
Bound sand molds are quick and easy to make, and the ceramic mold coat is spray-on/burn-off, and also relatively quick.
I can make a sand mold and pour it perhaps within an hour. You can't do that with the investment process.
.

Vietti said:
Just a thought. Morrisonandmarvin.com sell castings and have very nice plans for a small Lukenheimer carb. PM research also sells a larger version. I used the castings that came with my larger Olds for a Lukenheimer type carb, works good. I'm a fan of the design, just added one to my R&V.
Click to expand...

That is a nice carb kit, and some nice carb drawings too.
My concern with those castings is that they would not match my odd 62.5% scale.

I have cast a few things in brass, and I must say, brass can be very problematic to melt and pour.
Molten brass emits zinc fumes that you don't want to inhale.
And I had a lot of gas bubble problems with brass.

It was basically the bad experiences I had with trying to cast brass that drove me to master casting things in gray iron.
Iron does not seem to have the gas/porosity problems that can occur with aluminum and brass.
I never have to use a degas agent with iron.
And scrap iron is very inexpensive compared to the copper-based and even aluminum alloys.

I am told that a good alloy that is well behaved is silicon bronze (Evadur is one brand name I often hear).

approx. 20 lb ingot
shop.clay-planet.com
Rather pricey metal, and I would probably try to allow my own.

I believe I could cast a carburetor using a bound sand mold and core, if it was not too small.
Some of the investment folks use vacuum-assist to get a full mold fill with sharp details.
And some use a centrifuge for small castings, so I guess that would be an inertia assist.

I found some information in old catalogs that were for sale on ebay, about Olds, Reliance and Seager manufacturing of Type "R" engines (three companies made the same engine, over time I guess).

I guess many here already know, but apparently the Olds 1.75 hp Type "R" was built by at least three companies, as I understand it.

Olds built the Type "R", as did the Seager Engine works in Lansing Michigan, and the "Reliance Engineering Company, Sole makers of the Reliance Cream Separators and Olds Engines", Lansing Michigan.
Perhaps the olds design was sold, more than once?

Looking at old catalog prints for the Seager and Reliance Type "R" engines, there are some differences between the two makes of the same engine.

The Seager has a flat cutout along the bottom of the frame, and what looks like a traditional mushroom-shaped muffler mounted horizontally on the back of the engine.
The Seager catalog cut shows a round gas tank that is mounted near the front of the engine, and no apparent carburetor is visible under the cylinder head, although we know one must be there.

The Briesch 1/2 scale Olds has a more arched cutout in the base, but I don't see an actual Olds with that cutout shape, so perhaps that was a bit of freelance work?

Finding photos of original Olds Type "R" engines is very difficult, and I have to assume the type "R" was somewhat rare of an engine.

I did find this video online, which is extremely helpful to this build, since it shows all the moving parts in action, and also gives a good view from the sides, crank end, top to some extent, and head end of the engine.
I pretty much understand how typical hit-and-miss mechanisms function, and there is not really that much variation between all of the designs I have seen. Its basically a cam mounted on the large gear, a pushrod, a rocker arm, and then various counterweighs/mechanisms that control the tripping mechanism.

So I am gradually finding all the bits and pieces I need to bring this engine to life again.
I guess I will do a little freelancing of my own, and use the lower cut on the base that can be seen on the Seager, and the disk-shaped muffler that can be seen on the Reliance.
The purists will howl over my hybrid mix-and-match, but hey, where is it written in stone exactly how one must recreate an old engine design?


Below are the Olds photos I took at Algonquin in 2018.
This is a very similar Olds model, with some distinct differences from the Type "R", and a much more complex head/intake manifold/carburetor design.

The Type "R" is a pretty simple design, thank goodness for that, or I would not have time to attempt this.

Edit:
Looks like there is a floor in the crankcase area on the Olds below.
I seem to recall the Galloway being open in this area. 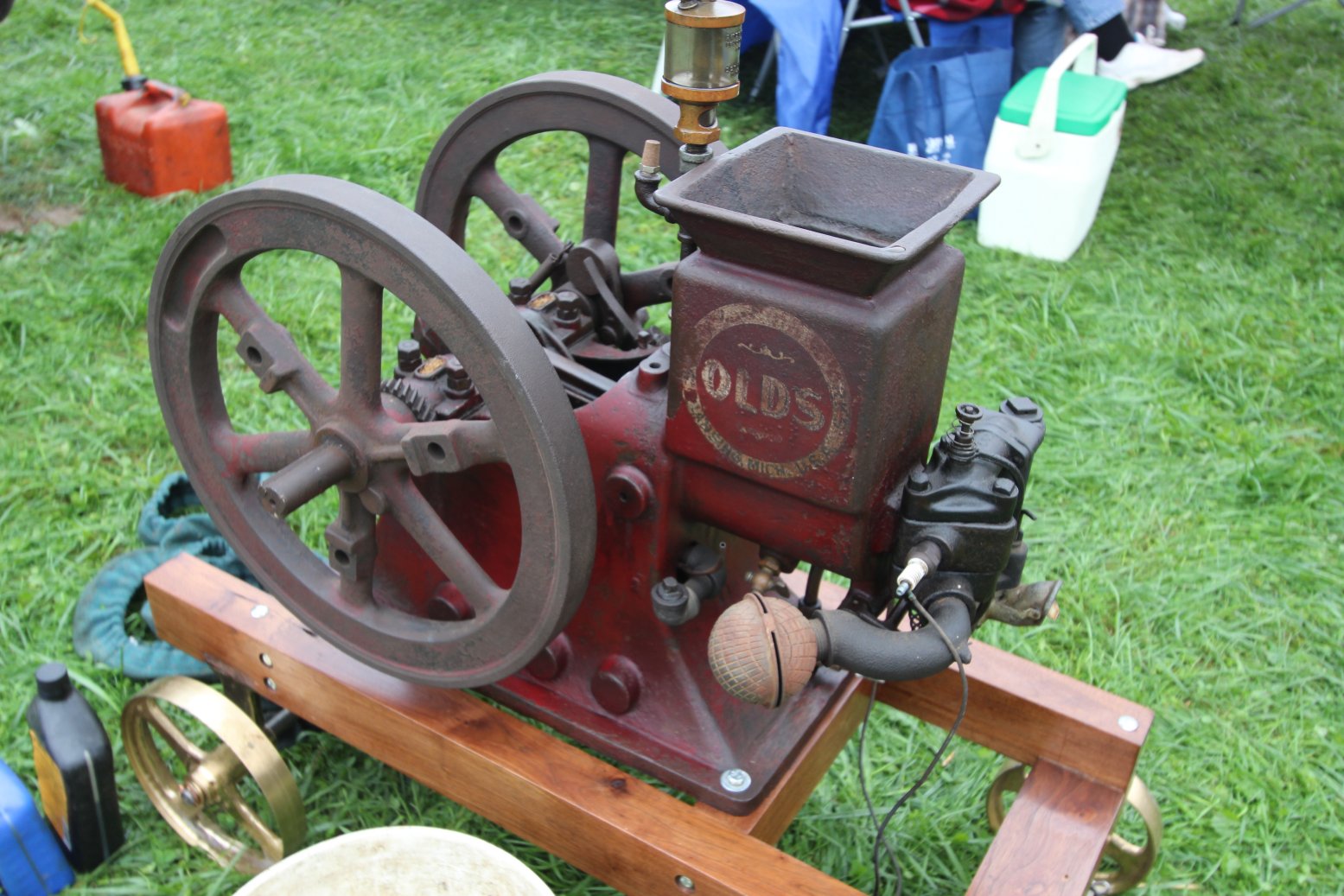 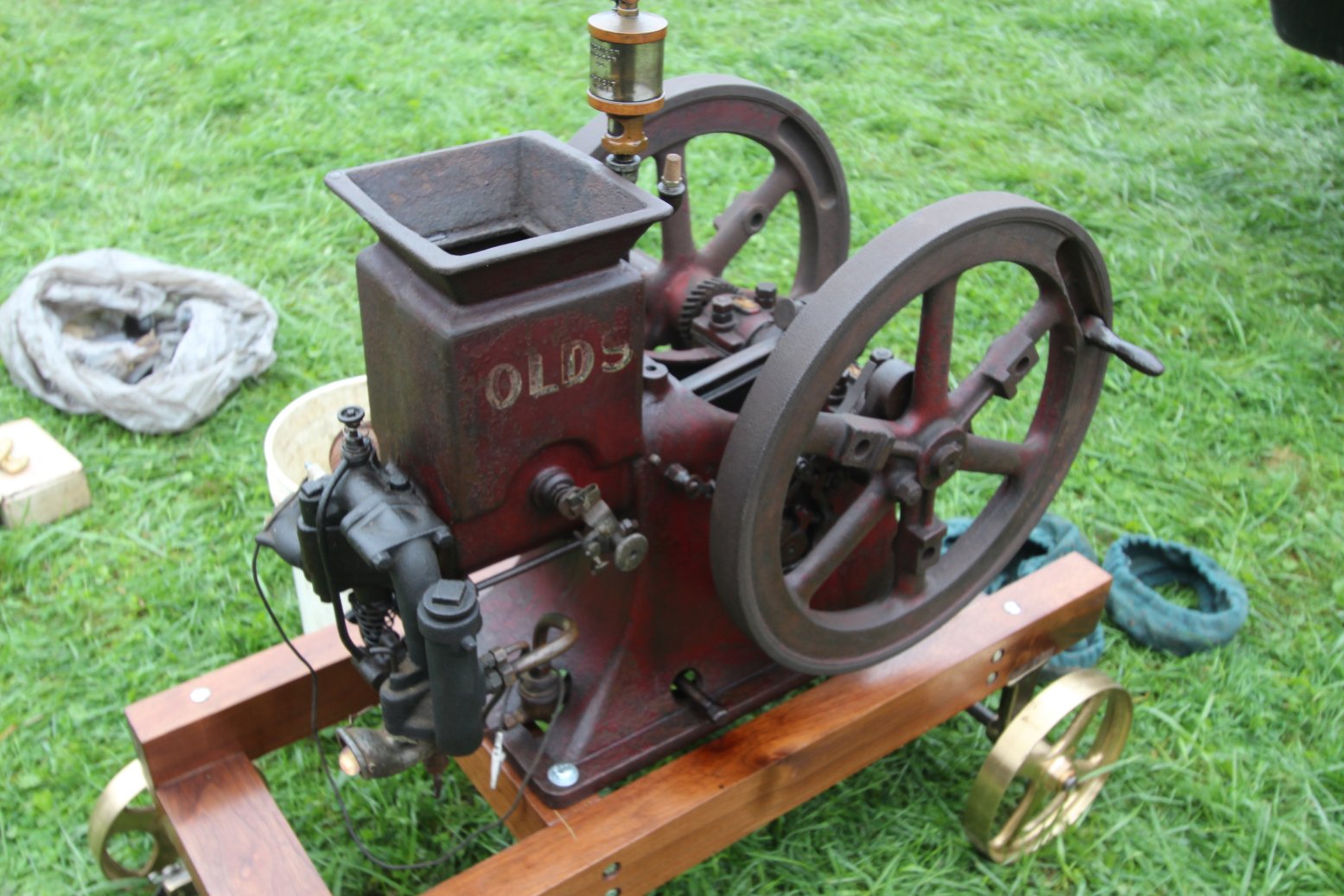 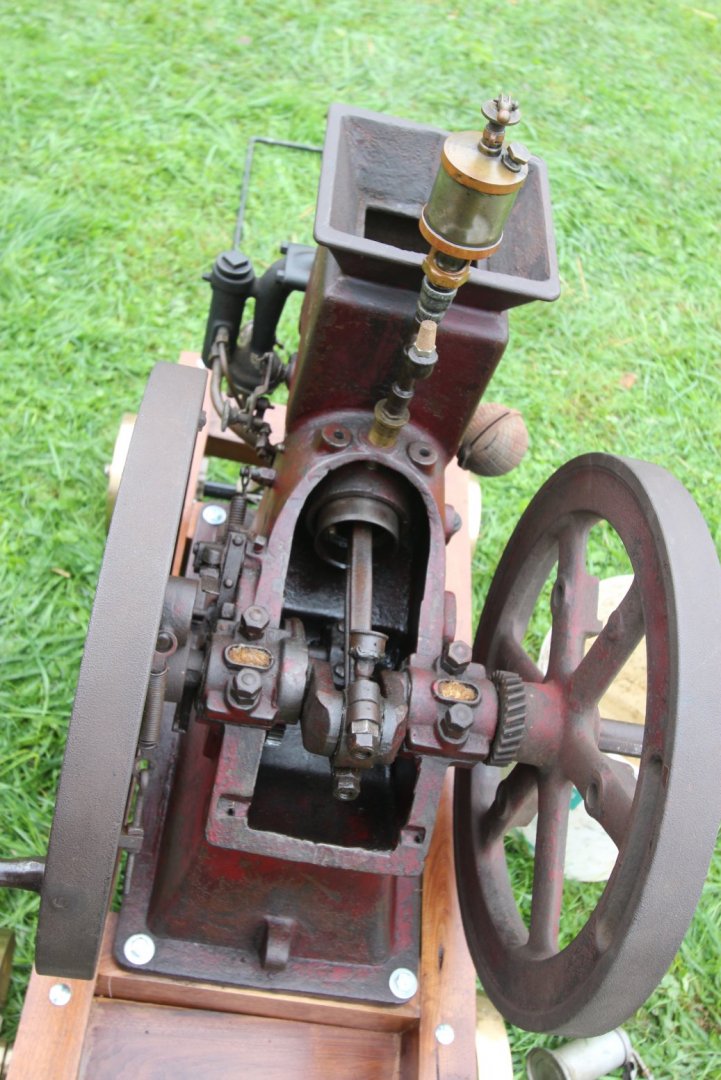 I wonder what the tap on the side of the water hopper is for the engine above?

Water injection? I thought it was an ignitor, but there is a spark plug on the cylinder head.

I never fails to amaze me the variety I see on old engines.

Edit:
I see a wire connector, so I guess that is just a boss for support of the points/ignition mechanism, and not a wet tap into the hopper.
There may be some parts missing from that engine.

Seems like a horizontal pushrod would be needed, unless it is tucked inside the frame.
That is a very strange valve gear/head/carb/manifold design to say the least.

Edit 02:
I do see a horizontal shaft running side-to-side in the crankcase area, with its own bearing and bearing cap, and so it would seem the pushrod mechanism is tucked inside the frame somewhere.

Found a bit more history on the Olds company and later companies that built the Type "R".

Just kidding, I found it at an estate sale.

I will post a link, there are many other type engines where this one came from. 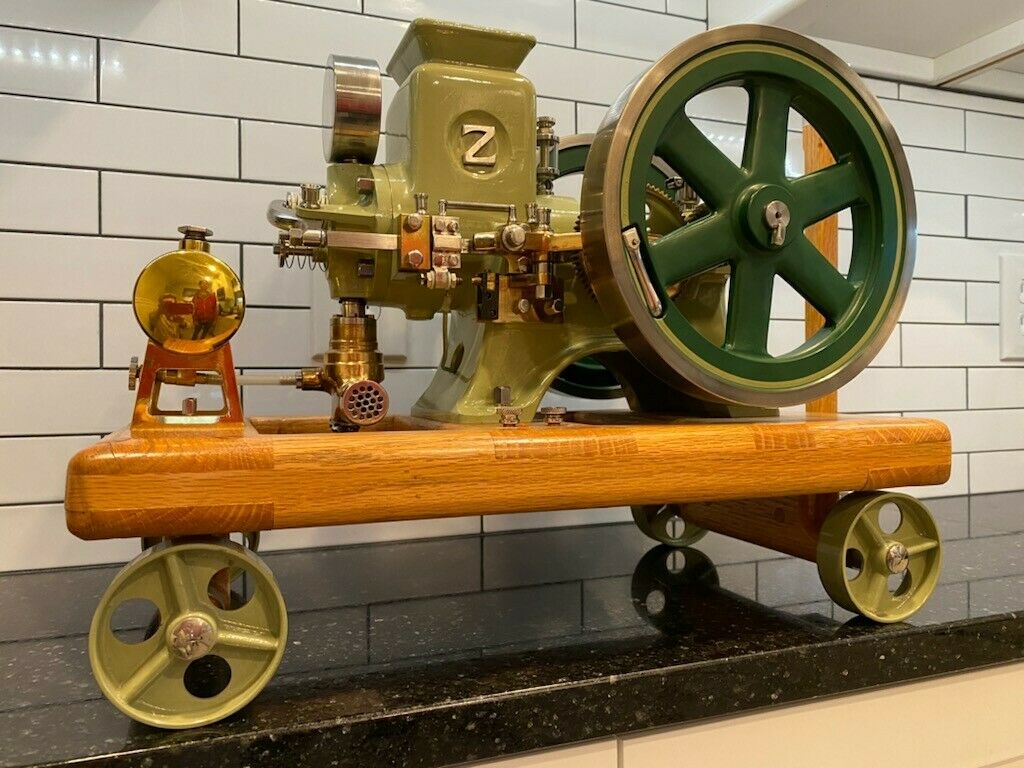 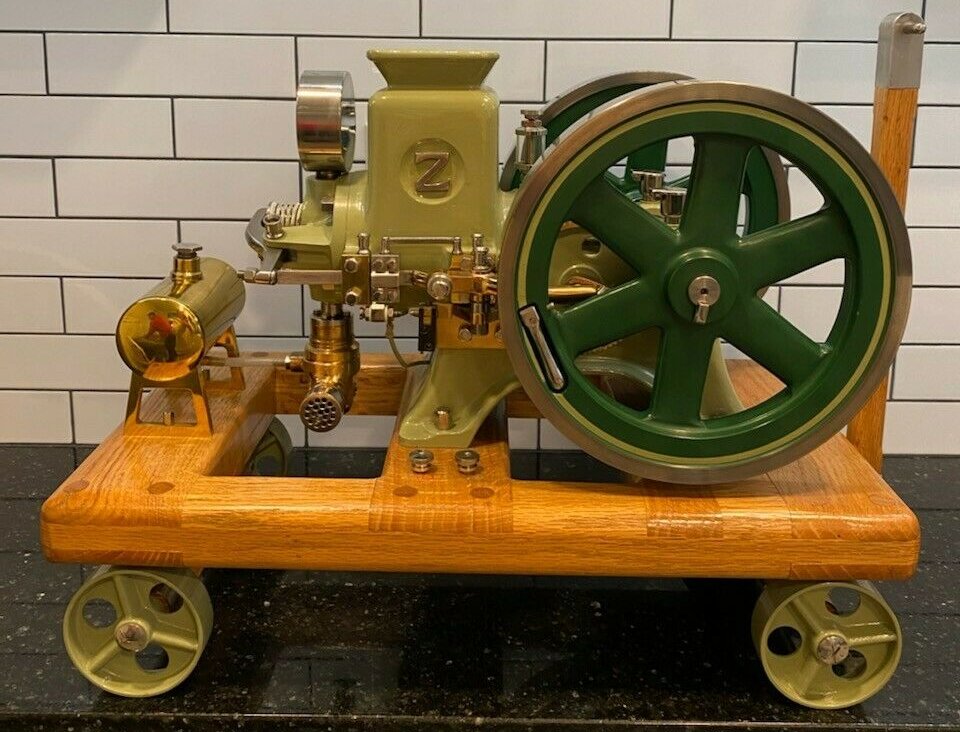 Did finding that Olds at the estate sale scratch your itch or are you continuing with your own casting project? Bob

(I just ran across this post; I missed it somehow).

I basically bought the Olds to get a set of plans.

I am creating a new Olds engine design, based on photos and prints of old Olds engines, and not base it on the Briesch Olds drawings and dimensions, so as to avoid any copyright issues.
The Briesch plans do offer some insight into how everything connects together.
My parts and the Briesch Olds parts will not be interchangeable, and probably won't be the same scale either.

I would still like to cast one, but I have a few other engines I would like to cast before this one, such as a Frisco Standard single marine engine.

One thing slowing me down (beside too many work projects) is the delay on the new Prusa XL 3D printer.
Prusa is having all sorts of supply issues, and is struggling to get the XL's to market.

Prusa is saying that it will take perhaps 6 months to ship the first day's orders.
I don't recall when I ordered my XL. I left a refundable deposit.

The XL has a 14" cubed print area, and so it will give a bit more elbow room.

If nothing else, I would like to 3D print patterns for several engines, including the Olds, and cast them in permanent aluminum match plates.

I
Metal casting at home
2

Yesterday at 1:59 PM
peterl95124
P
W
Finally got back into the workshop