This project was posted back in September in the Photos section, but wasnt quite complete. And I know the video wasnt great either. I am still no better at videography, but results are a little better this time.

This is a 1/10th scale 1915 vintage Bruce-MacBeth stationary 100 hp gas engine electric plant. This engine project was a collaboration between Doug Kelley, and myself using an engine from the collection of the Coolspring Power Museum and another owned by a fellow engine collector Dave Johnson. Both were quite accommodating in the project. The only castings are the flywheels. All other parts and assemblies were fabricated from brass, and steel. The model uses a 1 bore x 1.2 stroke, and has a wet oil sump with splash lubrication. A top mounted camshaft is driven through a pair of miter gears sets from the center of the crankshaft. This drive arrangement was unique to Bruce-MacBeth engines. The rocker arms are roller type on both ends, as original. The real Bruce-MacBeth engines operated at 500 RPM, or less. The model will run at 500 RPM, but oil splash is marginal. It does very well at 575-600 RPM as shown in the video.

The propane fuel system used is ideal for this type engine, and for anyone wanting to run their engine for long periods. It took me a while to understand it, but now I prefer it whenever it can be used. It is almost odorless, wont flood, wont ruin paint jobs, and burns extremely clean.

The alternator was added after the engine was completed. My engine looked lonesome by itself so the alternator became a secondary project. It is a similar vintage Westinghouse design. The alternator stator started out as an old induction rotor ceiling fan. The rest was fabricated including the permanent magnet rotor. The output is nominally 115vac at 700 RPM. Being a 2 phase motor the output phases are separated. One phase is used for demonstration load. The other phase is used for powering the cooling fan. The engine/alternator has demonstrated 90 watts resistive output at 115v at 700 RPM. It struggles, but surprisingly still has more throttle left.

The cooling system is comprised of a deaeration/expansion tank, computer radiator, 5 speed fan, circulating pump, and temperature gauge. It works great and keeps the engine at 150-160F with light load even at the lowest fan speed.

It was a lengthy, but fun project. If anyone is interested in plans for the engine, Dougs excellent build series should be in Home Shop Machinist sometime later this year. 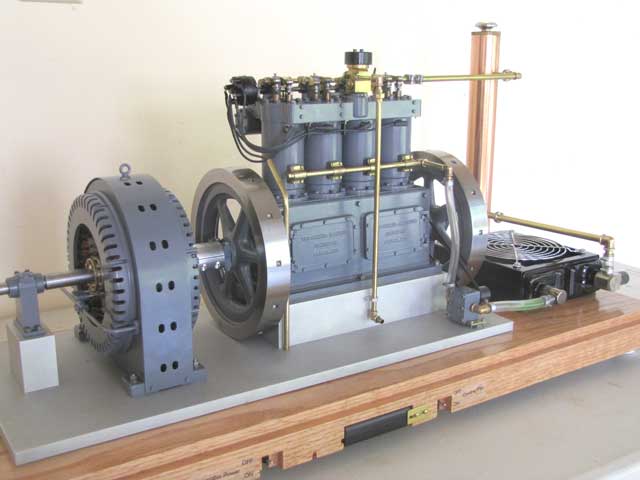 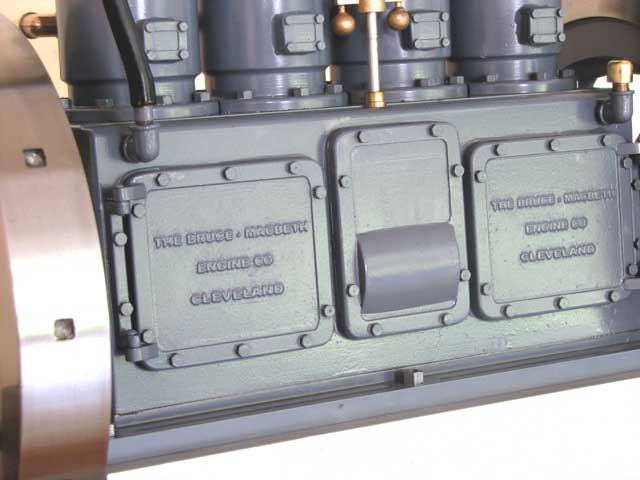 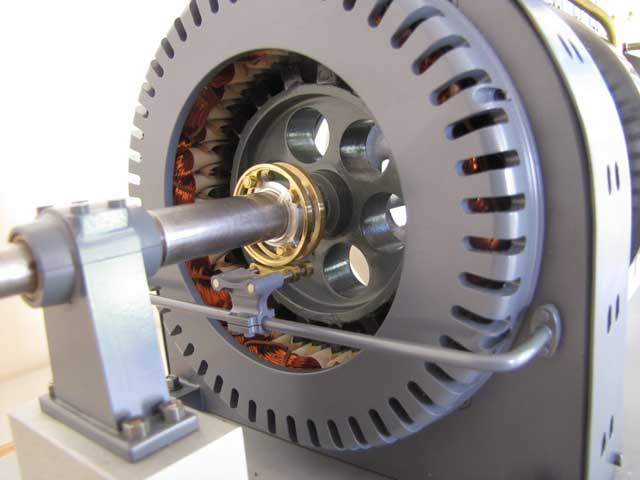 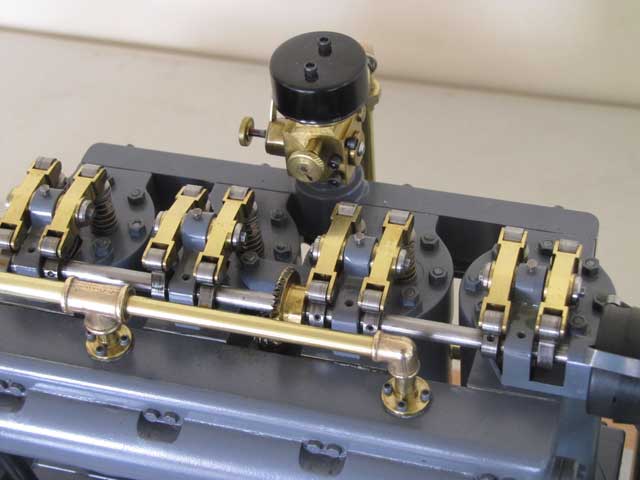 Wow! That is a very unique setup, being an Electrician and Electronic Tech I can appreciate all your efforts. You have a one of a kind unit. Very good work. I would like to build one but would like to make it smaller. I am currently working on a marine engine to power a PM Reasearch Dynamo I Machined from casting. Very small setup. I love the Fan Motor conversion you done also. I will be looking forward to Doug's post. th_wav th_wav th_wav

I believe your Bruce McBeth is one of the nicest running low rpm engines I've seen. I'm looking forward to the HSM article to see how you and Doug built these engines.

I appreciate the comments guys. I tend to favor slow running engine designs because they can sound soooooo nice. Glad there are some others out there that like them also.

Beautiful and beautifully running engine Jeff. I have seen Doug's as well though not running. Both the pictures and video are great by the way!!! Thanks for posting this wonderful engine in its finished state.

You two should be very proud!

I can attest, it's even better looking in person!

Marvellous...I'd love to build something like that but just dont have the time at the moment..maybe when I retire and have completed all the other jobs thus far....

Congrats to a creation well made...
M

Absolutely stunning job, runs really well. Could I ask how you done the lettering on the crankcase covers if you did not use castings?

I never cease to be amazed here.

Martin,
Thanks. The raised letter making process is called photo, chemical, or acid etching. The background was dissolved away leaving the raised lettering and door border. Identical to the way printed circuit boards are made. There are numerous sites on the internet that explain it.

That's great Jeff!
Did you do that in your shop?

Dave,
Yes, I did. Everything except the flywheels (done on a friends 12" lathe) was done on my old Logan 9" and SX-3 mill/drill, but I just got a new 11" lathe so hopefully all future stuff will be done in-house.

My basement shop is small, comfortable, but messy. Sorry, no photographs!

jeff you and your partner did an excellent build on both parts engine and gen. also very nice runner. jonesie
D

Marvellous work. That's art!
I guess that, togheter with the Holt Engine, these are the most impressive model engine to look!
S

Rustkolector said:
Dave,
Yes, I did. Everything except the flywheels (done on a friends 12" lathe) was done on my old Logan 9" and SX-3 mill/drill, but I just got a new 11" lathe so hopefully all future stuff will be done in-house.

My basement shop is small, comfortable, but messy. Sorry, no photographs!

OH I know you machined the parts! ;D I didn't make myself clear. I was interested in the photoetch process......

On a model of this scale those raised cast letters are a very important and prominant feature that needs to be done well or it can really detract from the rest of the model. I must say you did that very well! :bow:

Dave,
The process isn't that difficult. Getting a good result, however, can be until you learn the how it works. I wrote an article on the process for the Gas Engine Magazine a long time ago. I looked and it is still our there at:

This slow etching process works fine for low relief nameplates when you use 360 brass stock, but 220 brass works better. If you want higher relief detail, you will have to set up a more elaborate warmed, and pumped etchant system for faster etching. Too much mess for occassional projects. So, I have decided that doing the artwork and giving it to a commercial etcher is the best way to go. You can get either the cast look or the sharper detail look. The cost is reasonable if you do the artwork.

If you want lettering only, Doug Kelley used a different approach on his Bruce-MacBeth engine. He purchased cast metal letters which he glued to his inspection doors. He milled the relief for the border. They look great. He says they are very expensive, and require a very steady hand to lay out properly, but the results in the photo below look very nice. One small problem with the cast letters is the very limited font sizes available. Don't ask where he got them. 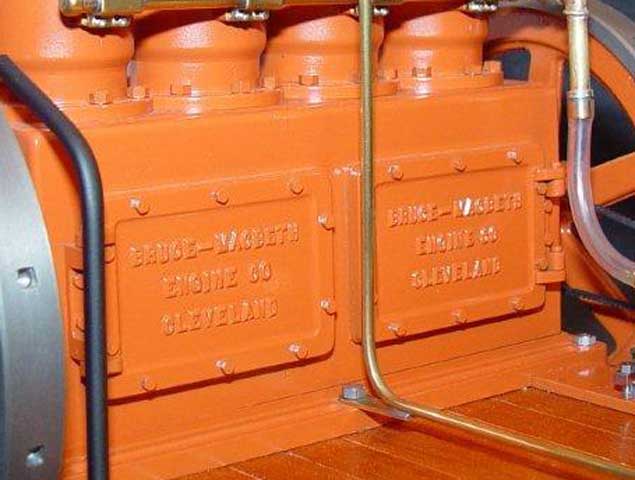 Hope this helps some.

Bill,
Yes....that is the company. Thanks!