I recently completed a 1/8th scale model of a 25 hp 2 cylinder Nash gas engine electric plant. Nash engines were produced by the National Meter Co. of NYC and were designed by their head engineer Lewis H. Nash. The engine design era was the late 1890s when illumination and remote electrical power was becoming popular in America. Nash engines used an L-head valve design with ignitor ignition. The early Nash multi-cylinder engines used troublesome mechanical linkages to trip the ignitors. They soon evolved to an electrical solenoid ignitor tripping device before switching to spark plugs. I chose spark plugs. No sense in creating unnecessary problems. When most engines of the era were still spark governed hit & miss designs, Nash was the first US engine manufacturer to adopt throttle governing which probably explains why they became popular dynamo engines.

In particular, the two cylinder Nash engines were unique among dynamo engines of the era in that they used a 180 degree crankshaft design. This resulted in two power strokes in 180 degrees of crankshaft rotation and then 540 degrees of rotation without a power stroke. This would have caused considerable voltage fluctuations in the speed sensitive poorly regulated dynamos of the time. Nash chose to stay with this crankshaft design and installed one oversized 60 flywheel and sometimes two 60 flywheels we assume to minimize cyclic irregular speed variations. This model uses the same flywheel arrangement found on the 25 hp Nash dynamo originally installed in 1906 at the Biltmore Estate in Ashville, NC with one normal size and one oversized 60 flywheel. The original 1906 Nash dynamo stills resides in the Biltmore powerhouse in running condition.

This Nash model engine design uses a 1 bore x 1.13 stroke. Construction is mostly fabricated brass and steel. The camshaft, drive gears, valve operating levers, and adjustable roller cam lobes are exposed, the cylinders and cylinder heads are fully jacketed including the exhaust manifold. Lubrication is by splash and wet oil sump. The compression ratio is 5.5:1. This engine runs on propane using a small self compensating RC carb. A pair of Nash engines from the Coolspring Power Museum provided the necessary detail and dimensions for the model engine and generator design. The engine drawings were done by a good friend and model builder Doug Kelley.

The model dynamo is near identical to the Garwood Electric model dynamo used on a previous project with a few minor improvements. It is actually a 12 pole permanent magnet alternator with the output rectified to DC and regulated at 12v output. It is rated at 3A output at 500 RPM. The meter panel enclosure doubles as an engine cooling system incorporating a computer radiator, expansion tank, and a dynamo powered and thermostatically controlled cooling fan.

This model has been is a very nice running engine from the first start. With or without load, it sounds just like my neighbors John Deere B tractor. The audio comes close, but doesnt quite capture the unique sound of this little engine.
Jeff 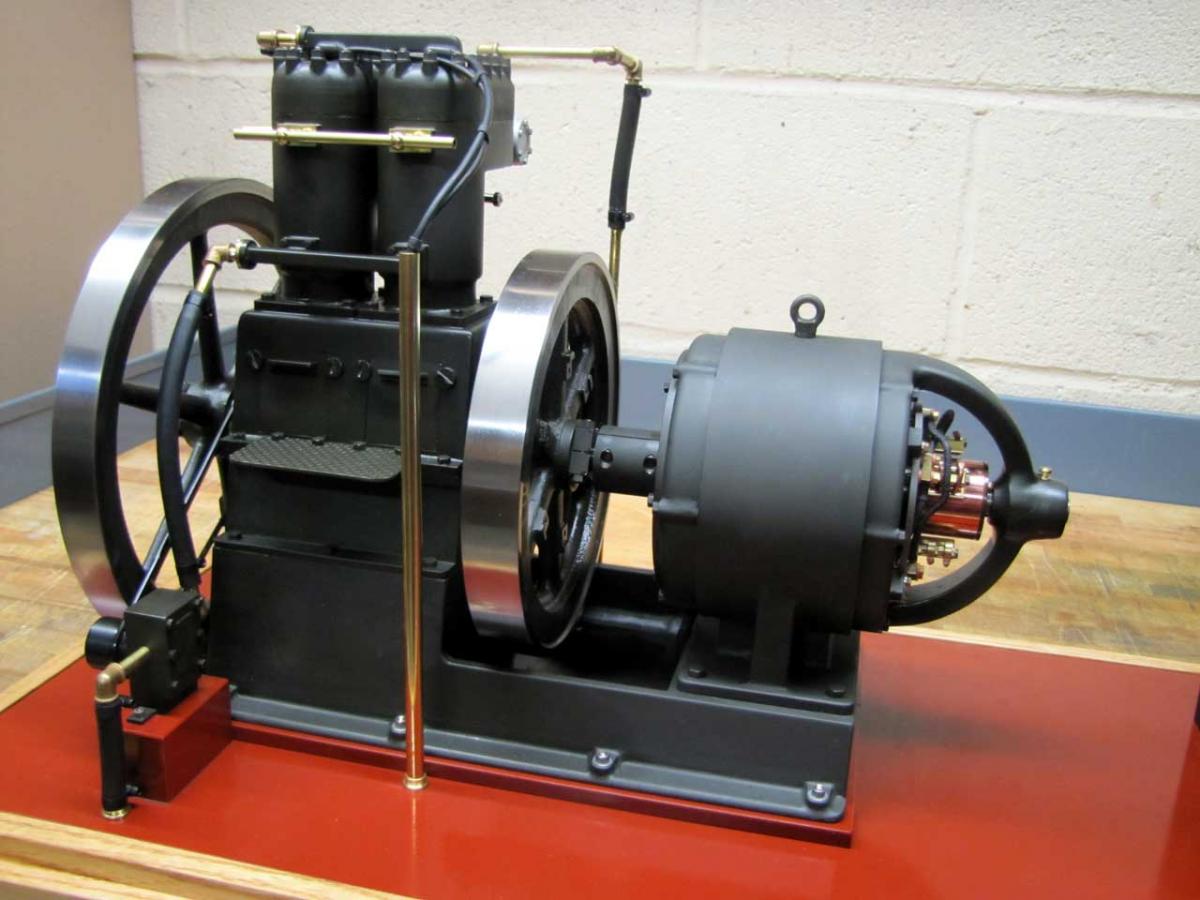 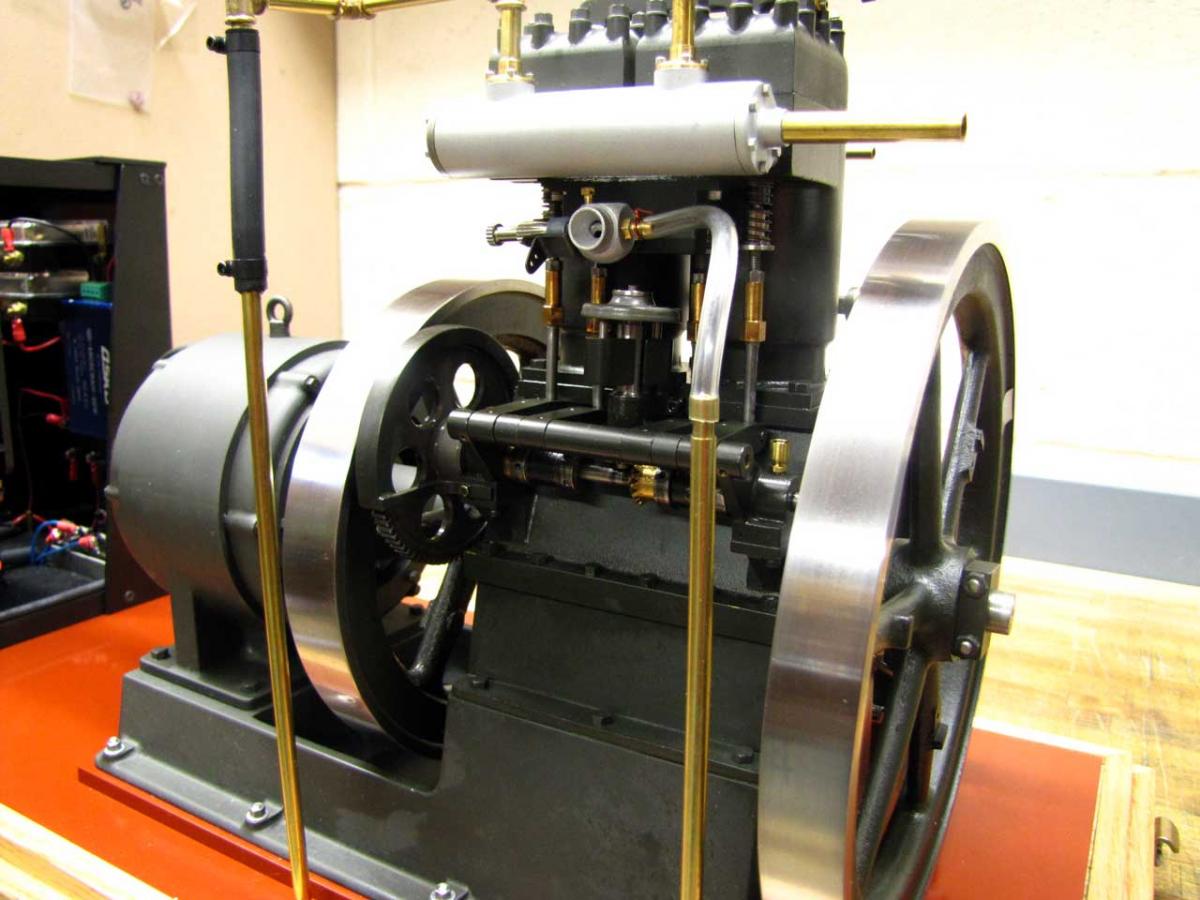 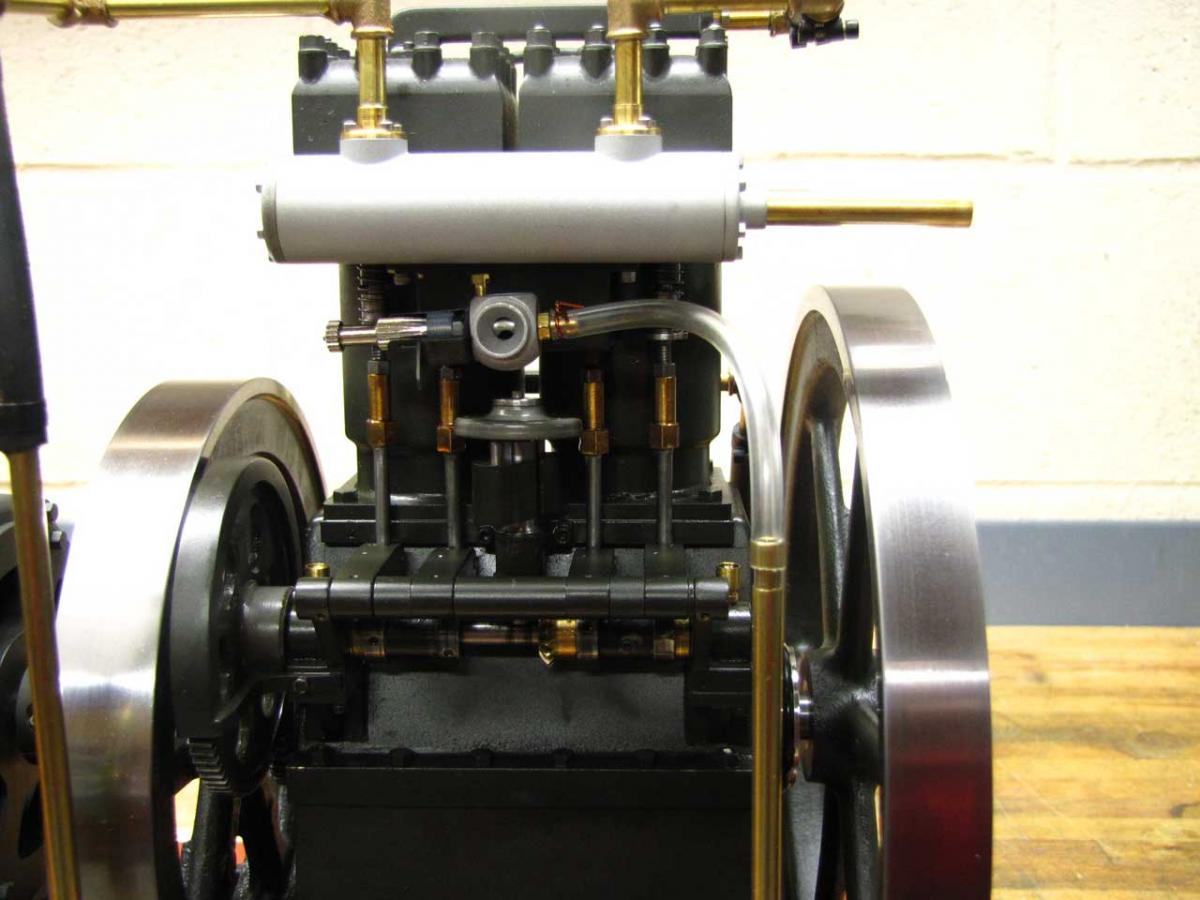 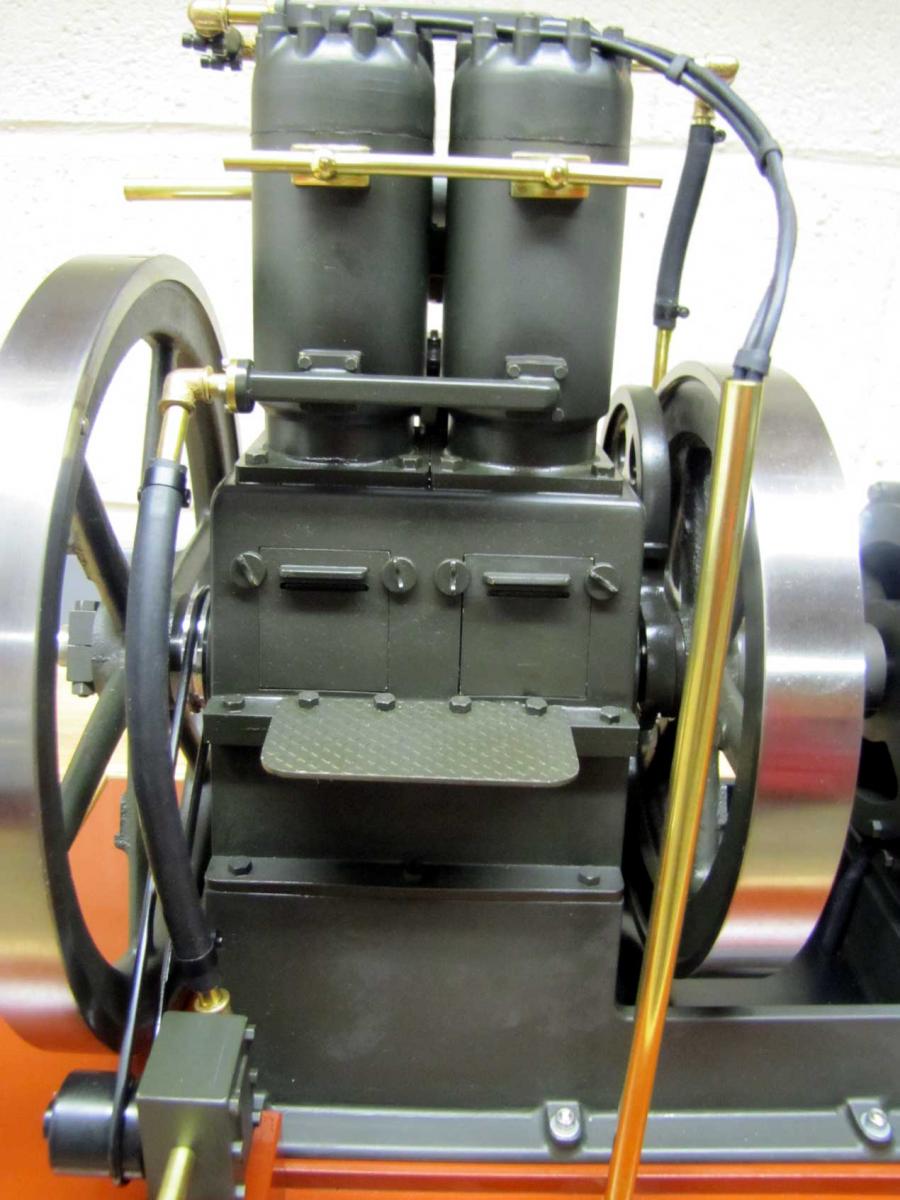 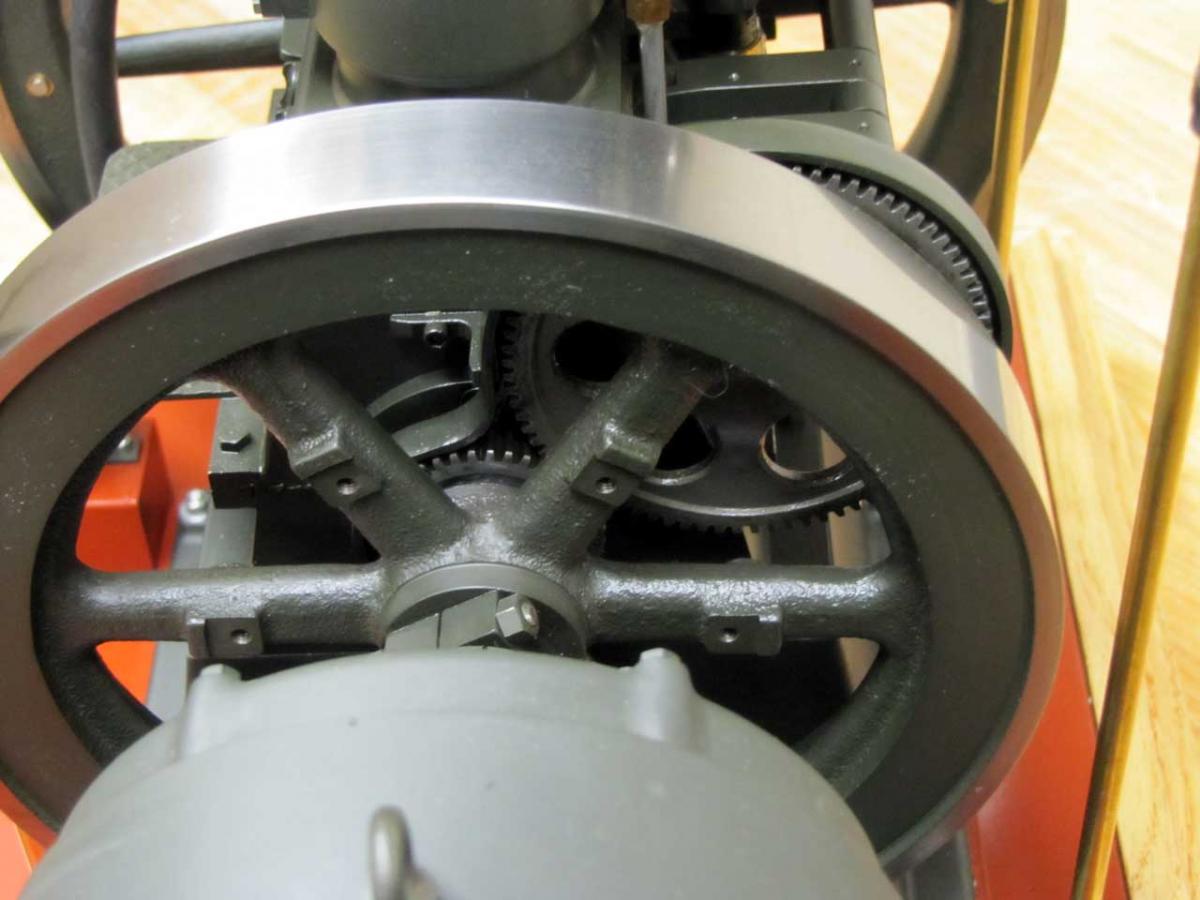 Beautiful work. I love the detail without using castings. Would love to see it in action but the video link seems a problem
R

TonyM
Thanks. The video link should work now.
Jeff
K

You've done a fantastic job of fabrication on your Nash engine and generator.

Thanks also for posting some history of the Nash engines.

Great engine. Great history. Thanks for sharing both.

THAT is a beautiful engine. I'm impressed with every discipline. I can't say enough.
I watched the video and loved it.
Thanks for sharing,
Russ

That is great, and a great runner. Thank you for providing the history along with the build information.

The model dynamo is near identical to the Garwood Electric model dynamo used on a previous project with a few minor improvements.
Click to expand...

Very nice model, excellent work. How do you build the generator? Do you have plans for this or did you reverse-engineer it from pictures?
R

rweber,
No plans. Just a few sketches for some particular items. A lot of experimenting went on during the build. You might want to look at another current thread regarding generator building.
Jeff

Jeff -
I am considering starting the Nash project after we finish our current build of the Snow. I purchased Doug Kelley's new book and the Nash looks pretty straightforward. As a John Deere two-cylinder fan, I love the idea of a two cylinder opposed model. I have read your posts about some modifications to the Snow and I know that can be a finicky model to get running well. What was your experience with the Nash and are there any pointers or suggestions you have in getting the Nash to run well?
Jim
R

Jim,
Actually, as built my Nash ran surprisingly well on the first start. I run most of my engines on propane so that might have a little to do with it, but all three of the original engines we built initially ran almost perfectly with little tweaking. It's a very good slow speed engine design with large diameter flywheels allowing very slow operation and that mesmerizing JD sound. As far as building, I have learned from experience to pay close attention to using perfect fitting piston rings and ring grooves as well as almost perfect sealing valves and close fitting valve guides and valve stems. Valve seats should be very narrow. Use a hand vaccum pump and gauge to test your valves. If so, you should have great compression and a good running engine from the start. I run a splash oil sump so I added a third compression ring as a scraper with a shallow oil collection groove and oil drain holes below the bottom ring.
Jeff

Jeff,
I've gotten a good start on parts for the Nash, all the crankcase, water jackets, bearing caps, crank shaft, and other little bits. Getting to the point I've got to start brazing. I made all the parts in steel as I already had the stock. I'll start a thread and post some pictures eventually.
I was interested in your use of propane. Do you use regular torch cylinders? need a regulator? changes to the carburetor? Never used propane for an engine before but it makes sense.
Thanks,
Doug
R

Doug,
I use std 1 lb Coleman propane cylinders (you can now buy legally refillable 1 lb bottles and filling equipment). A regulator such as the Weber Go Anywhere Grill regulator that reduces bottle pressure to about 4-5" of water column pressure is suitable. The other item needed is a demand regulator. You can make them easily with a few Tecumseh Engine parts. The best drawings for this regulator are found at Jerry Howell's website. This regulator controls gas flow such that gas only flows when there is a negative pressure signal at the regulator caused by the suction fuel draw of the carburetor. When the engine stops, fuel flow stops. Changes to the carburetor are mainly needle valve setting. It requires about 2-4 additional turns since the vapor fuel flow needed is much larger in volume than liquid fuel. A self compensating RC type carburetor (needle setting opens as throttle opens) is recommended when variable speed operation is needed. Use smallest carb you can find.

Advantages of propane are easier engine starting, less odor, cleaner engine inside, and safer as no fuel to spill. I build only slow speed engines so I don't have any experience with high speed engines on propane.
Jeff