Being a plumbing contractor for 34 years now, I have known that it is not a good practice to mix dissimilar metals due to electrolysis.
How is this different with boilers?
What pressures can your boiler be operated?
Since I am building a vertical 7.5" diameter x 4.5" height boiler, would it be practical to build it with your methods or fabricate the entire boiler out of copper?
BTW, your craftsmanship is superb!
Regards,
Giovanni

Hi Giovanni, Yes, you are probably exactally right with your assessment. I chose this particular method of construction because of my lack of equipment to silver solder an assembly as large as I have. My boiler is 5.5" OD x 11.75" tall. The fire box is 4.2" ID x 5.0" tall. Much bigger than I wanted to tackle for a silver solder fabrication. Plus my success of welded steel joinery is on the plus side. As far as electrolysis is concerned, well, I may not live long enough to have to worry about it. I do plan to put a fire in the boiler and make steam, but most of the time it will be ran on air at shows.

Thank you for the interest and comments. Many heads are better than one anytime.

Right now, I have 6 more tubes to drill, ream and roll and that phase will be done. I have a couple of plugs to make and an adaptor to make to hook my hydro pump up to the boiler for the hydro test. I will take pics and post the results soon; I hope.

I do not weld but have been silver soldering for a lifetime.
The problem that I am coming up against is that the scale model boiler shell is 7.5 inch outside diameter x 4.5 inch height and copper tube is not made in this size but steel pipe is.
I can have 1/4 inch copper plate laser cuter with dove-tail joinery and then rolled for a strong silver soldered joint but steel pipe is looking better all the time with a lower cost in materials.
I'm building 6 boilers at one time.
Regards,
Giovanni 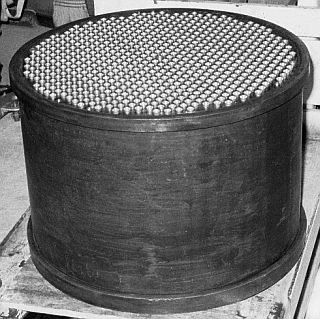 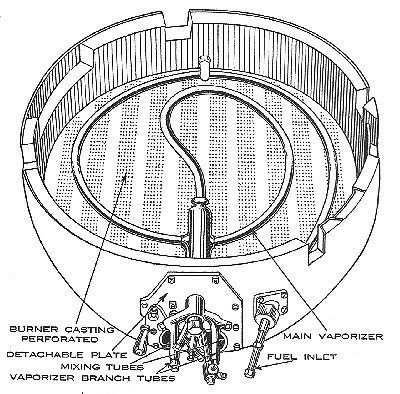 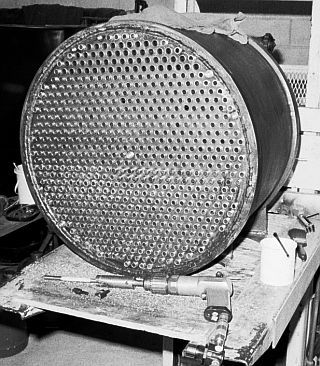 You would think that electrolysis would be a problem with a copper tube rolled into a steel end plate, but I have run one for 10 years without leaking a drop, and I know of three other individuals with the same copper/steel type boiler, and they have not had problems either.

If it were a problem, it probably would have shown up over a 10 year period in at lest one of these boilers.

Wouldn't an all-copper boiler be faster to boil and the water PH is not critical ?
I'm planning to use distilled water, too.
Regards,
Giovanni

Copper is certainly a better conductor of heat so should be easier to bring upto pressure but you should do this with caution as too rapid heating can cause the tubes to expand at a faster rate then the barrel. Maybe not such an issue with the proportions of your boiler but can be on a loco or traction engine boiler.

Could I possibly hybridize the boiler construction by using a steel shell with copper plate bulkheads and copper tubes all silver-soldered together ?
Why can't the traditional steel boiler shell and welded bulkheads be galvanized before installing the copper tubes ?
Regards,
Giovanni

Galvanizing contains zinc which will leach out and eventually you will have no coating inside, this is why you should not use brass in places that will come into contact with the boiler water as the zinc degrades and the part will fail.

PS may be worth moving this to your 7.5" boiler thread to save hijacking this one.

Well, I reached a major mile stone with the boiler tonight. All the flue tubes are in, the holes were plugged and compressed air applied to the boiler for an initial check. I had a lot of blow by on the flue tubes; mainly because I did not know how much to crank the tube roller. Well, I do now. I still have a few hisses and I will need to chase those down with soap and water. The air pressure was at 180 psig. After the hisses are all gone, I'll try the ole water hydro test and see what that produces. 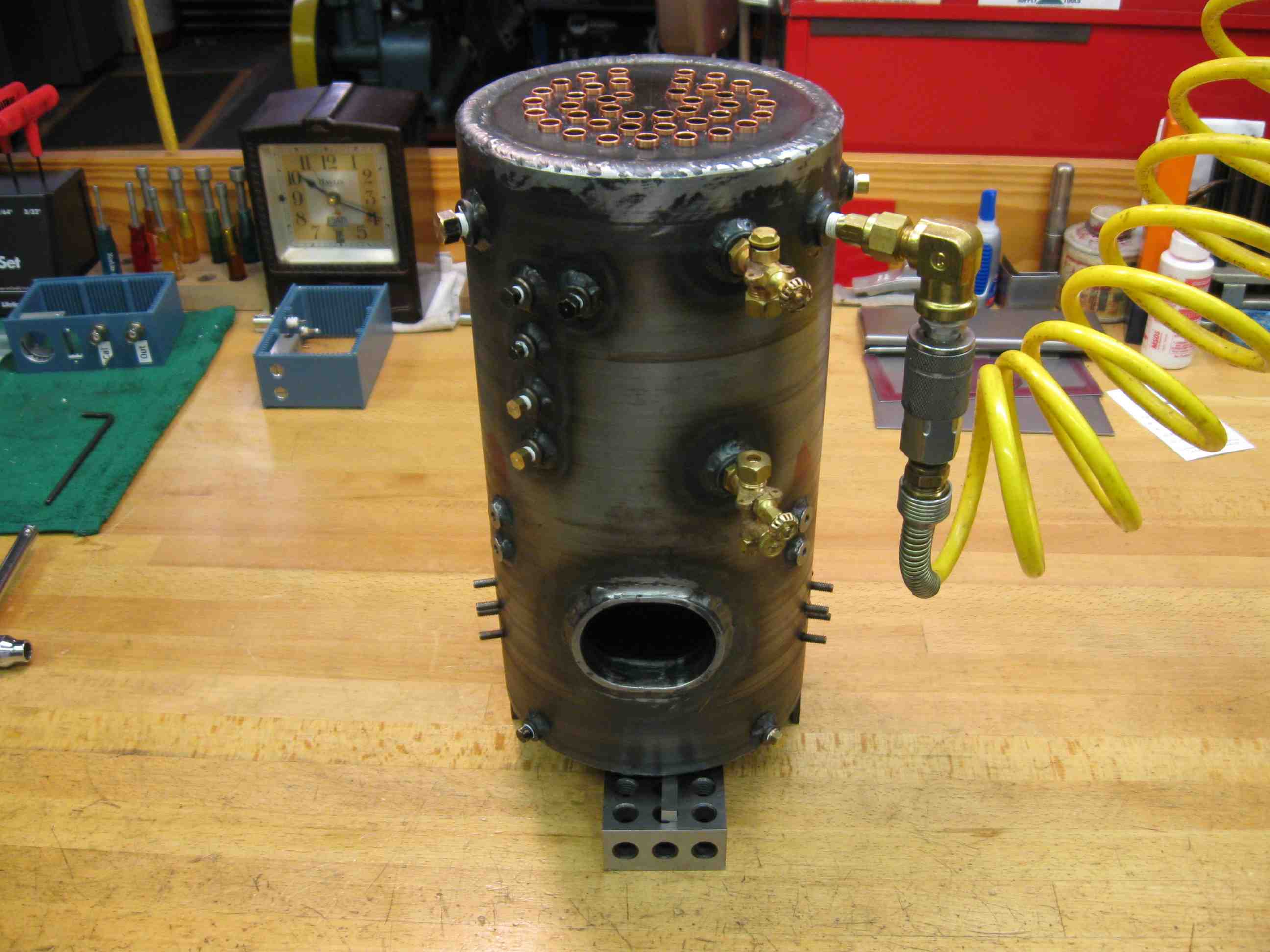 Just a safety note for the less experienced builders when testing a boiler it should really be filled with water before being presurized as a liquid is far less explosive than a compressed gas should there be a major failure.

Jasonb, I never realized nor have I ever heard of that safety issue. Thank you for bringing that to my/our attention. I must say you are a wealth of information. Thank you for sharing.

A couple of days ago I finished putting in all the flue tubes. The holes were plugged and a small amount of air was applied to the boiler. There was a lot of blow by on the flue tubes. I rerolled the obvious ones. Then I applied soapy water to the tubes and tube sheets. You could see little tiny bubbles where the air was leaking. So I rolled just enough to stop the leak. After going through all the tubes, the air pressure was increased and the tubes rechecked. After doing this process a couple of times and re-rolling a couple of the tubes, they held 180 pounds of air pressure without making any bubbles.

I must say I am very disappointed in my welding of the studs in the outer shell. There were 4 of them leaking pretty bad. So to seal them, I floated silver solder around them. I went ahead and silver soldered all 16 of them.

Tonight I did the hydro test. The initial test showed a very small weep hole at one of the frame mounting bushings. A light touch of the TIG torch sealed the weep hole and the second hydro went without showing any more leaks or weeps. The boiler was pressurized to 200 pounds plus. The boiler weighs 17-1/2 pounds with 3-1/2 pints of water in it. The boiler should work very well with my operating pressure of 60-80 pounds.

I do believe this brings the boiler build to a close. I do want to extend my thanks to all of you that have been following this thread and to those that have contributed a great deal of time with their thoughts, comments and suggestions. I have learned a lot and I hope some of you have been able to glen something from this build.

Since the boiler is done I will be continuing my postings about the LaFrance in my original posting under "A Work In Progress". 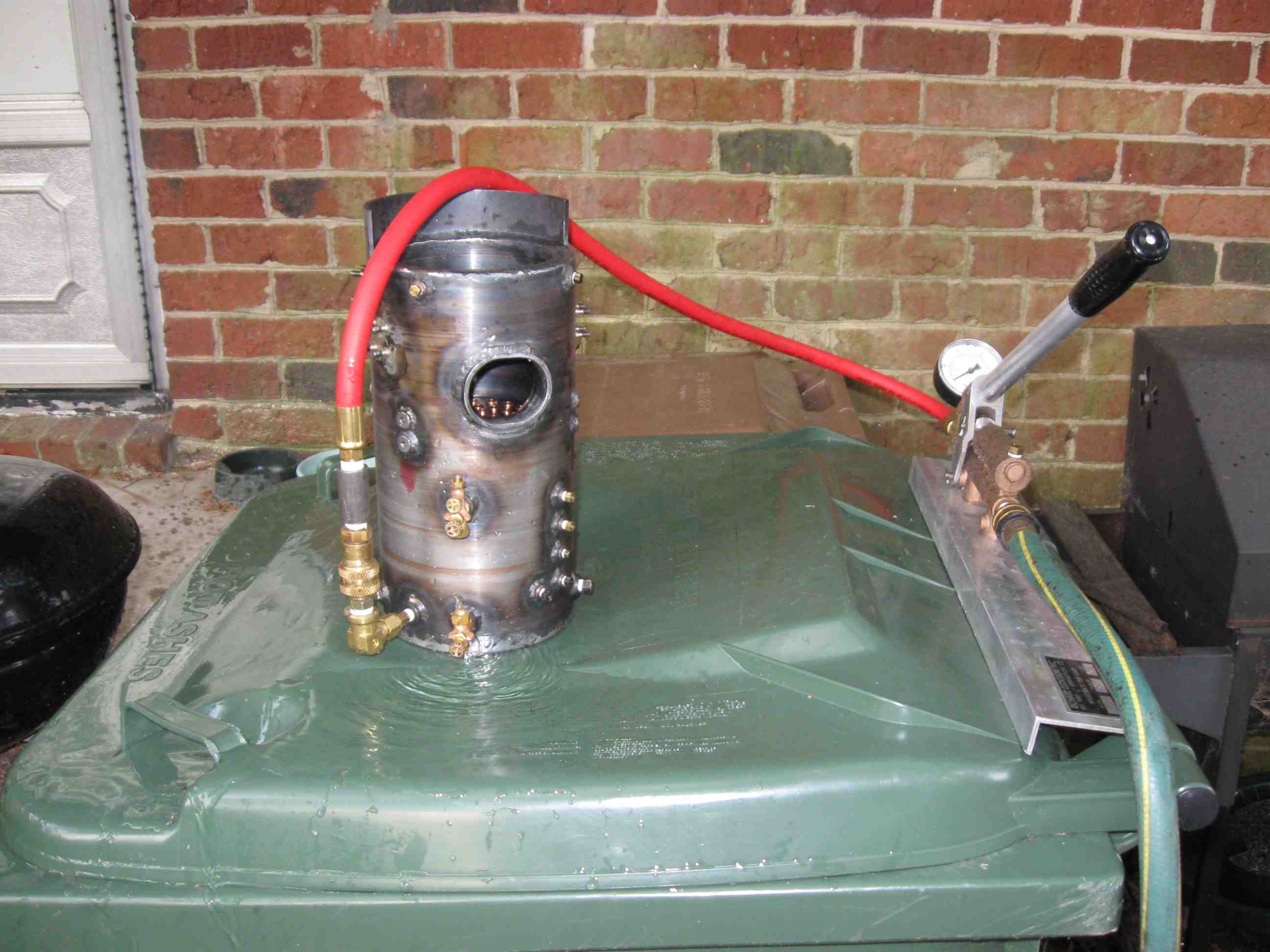 I will be looking forward to the updates on the build thread.

Thanks for posting the build, its been interesting and informative. Hope it will hold up in the steam test as the heat may move the tubes slightly and the odd one could need a bit more rolling when it settles down, though as the length is relatively short there should not bee too much differential movement of the copper/steel.

Just one point looking at the last photo, you may find it steams better with the firebox at the bottom

Jason, I started to laugh out loud when I read your last comment. My wife was sitting next me and had to ask what was so funny. I read your comment to her and she said you must have gotten your sense of humor from breathing to much steam oil :big: :big: :big:

She did appreciate your comment, because she fires the 1/3 CASE while I play sawyer. So she is very familiar with the process.

Hope to see a video of the finished engine.

The good Lord is willing and the tornados don't blow everything away, I will be glad to post some video.
You must log in or register to reply here.

R
How to recycle engine exhaust steam back to the boiler?