Hi everybody, I haven't made much recently as I have been restoring Myford lathes
I have just finished no 6 and I didn't want to bother anyone with mundane repeat threads
However I saw a useful tip and decided to do it on a super 7.However when cleaning down
my Sieg sc4 I thought it would be more useful .Someone had 3d printed plastic T nut to infill
the T slots on the cross slide to keep them clear of swarf.I don't have a 3d printer so I machined
some from an old nylon cutting board.I think they will work a treat and will make some for the super 7 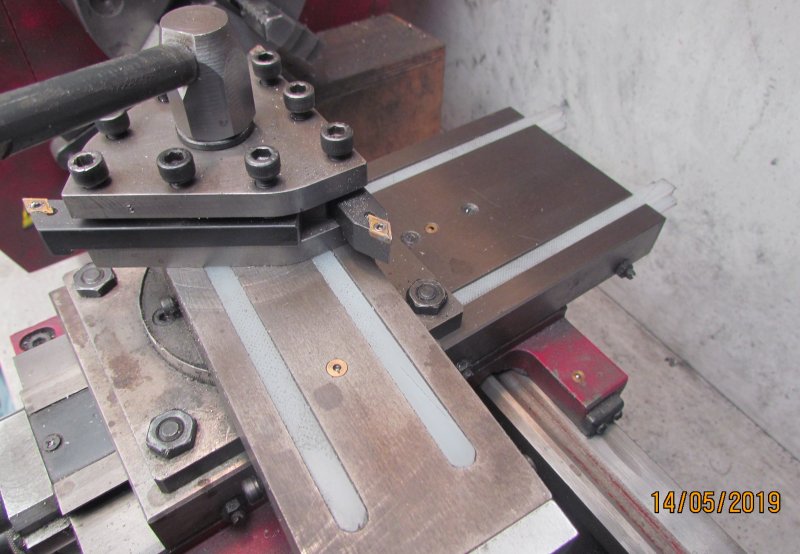 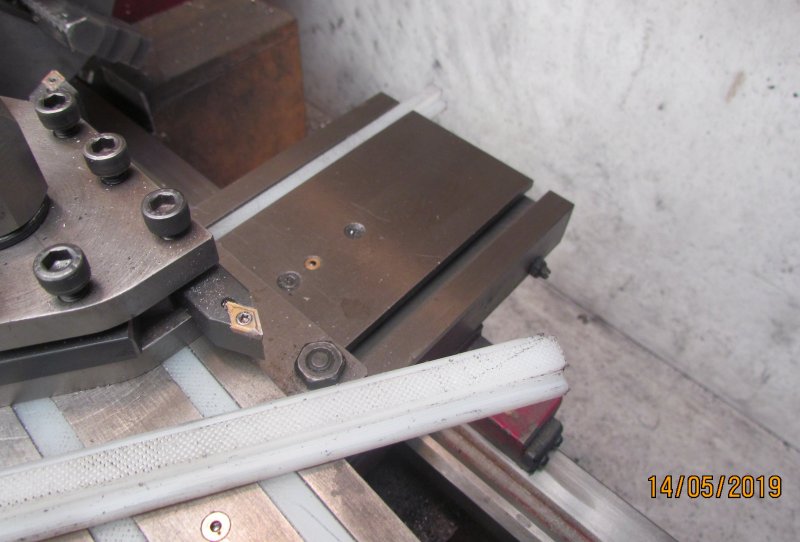 Quite an interesting idea but un the absence of a scrap Nylon cutting board, I wonder whether the slots can be filled with a hot gun glue. Any comments, please?

Slightly deviating from the principle, I have the round bed bars on my Quorn tool and cutter fitted with leather washers to try to exclude grinding dust.

As regards mill drills, my rubber apron has perished or hardened and I have a bit of waterproof membrane left doing nothing after weather proofing my workshop.

In all, thanks Barry it is a lot better than my existing steel ones on the Super7.

Thinking about tee nuts I bought a heap at the Doncaster Show 2019 and two thoughts emerged. The bigger ones to fit the Warco Mill drill turned out to be tapped 1/2" x 13 TPI so neither 1/2" BSW or M13 but they almost take M13 studding-- before they nip up.
They were selling Myford tee nuts and here in the UK, it is all metric now instead of 1/4" BSF. Perhaps 6mm rod can be tapped 1/4" BSF and thereafter M6 for more common nuts.

Oh and Barry, I lugged home a 3" rotary table which was water damaged for a measly £20-- and this has neither Myford nor Metric tee nut slots.

Things get odder. I thought it was just me

I've been trying this glue gun alternative and filled the unused tee slots on my Myford Super 7B. The first thing is not to remove all the gunge in the slots as it acts as a release agent to slide the 'covers' off and the second is to used a very sharp wood chisel to flatten the tops of the covers. It's dead simple and quick though not quite as cheap as Barry's way of doing it.

Thanks Barry for the idea

The T slot filler looks nice but I don't see the value. It's a machine and quick access to the slots is part of the design. A paint brush cleans out the slots well enough so I'm keeping my T slots naked.
G

I've rarely used the slots on a Myford. Well, since I got a mill drill with a lot of 'mod cons' so that apart from the rear slot taken up with a George Thomas rear parting tool.

As an aside, the boring table on the Super 7 is so easily distorted without the greatest care.
I once had the work of hand-scraping my first second hand S7B and vowed never do it again. Consequently, adding protection to the lathe bed top is covered to deflect turnings. My S7B might be old but the underneath of the saddle is built up with Turcite which again is easily embedded with fine swarf. It wasn't me in all of this, it was a very professional firm of machine tool reconditioners- who wrapped my knuckles

Again, in more exalted circles( the late Martin Cleeve amongst others), turning cast iron was frowned upon.

To bring the Myford story into the 21st Century, I was at the Doncaster Show a few days ago and saw the two 'new' Myfords on show and without any accessories, the prices were £3000 and £3500. It seems sense- as Martin Cleeve remarked in days of yore to protect his precious lathe bed. I suspect that my lathe bed was better slideways ground than when mine came out of the Myford factory.
I. saw a S7 which was as rough as a badger's bum at £1500- and it had the old sight glass headstock.
As will be seen, I'm now protecting what has now become a valued possession especially in view of the vast number of accessories that I have either made or bought over the decades. The little ML10 seems to be worth more than what I paid for my S7B that had been run on mahogany dust and stripped gears in the box.

My way of doing things, I have to add

In answer to DJP.You may have an arguament for the Myford lathes however they can be quickly removed/replaced
However I find them perfect for my Sieg sc4 as the t slots on the compound are rarely if ever used.The T slots on the cross
slide are usually filled wth crap but I can still move the tool post assembly inboard without taking out the nylon t covers
they are just ushed rearwards but left in situ until I change the toolpost assy back. They are really good on this particular lathe
Will wait and see with the the Myford lathes as I have made and fitted them to my super 7 and ML 7 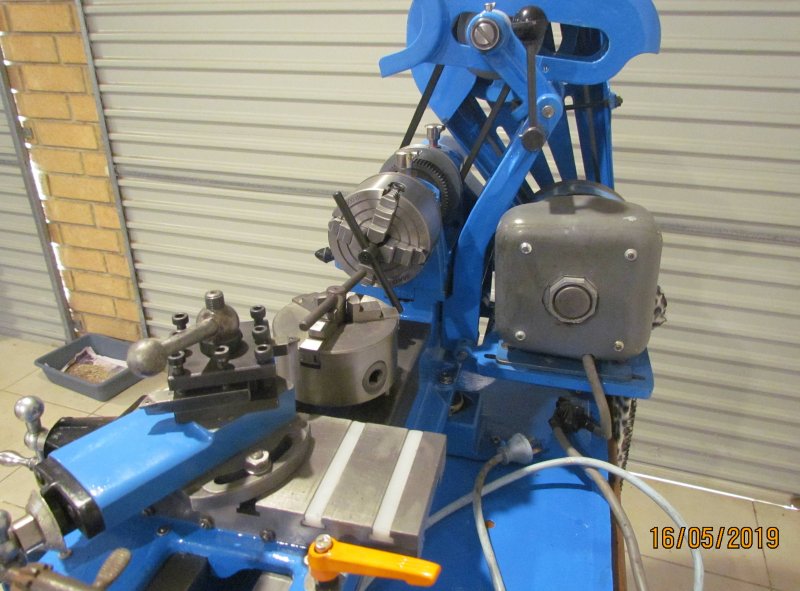 As Barry says about the ease of removal of his nylon filled variety, my glue filled ones
on the Myford are also surprising easy to remove.

Rather than start a new thread will add to here.I bought a couple more ML7s to restore.What makes the
latest one different is it came with a rusty cast iron stand which did not particularly want.However I did some research
and found it to be a Myford original stand for the ML4. I stripped it down,gave it a good clean and no of coats of paint
finished in Myford grey.I made and fitted 4 new adjustable feet and lined the shelves with rubber mats
Must it looks great and I am very pleased. Without changing itjust adding a few tapped holes I am making
a frame and 3mm top plate/drip tray to accept the ML7.Will keep you posted 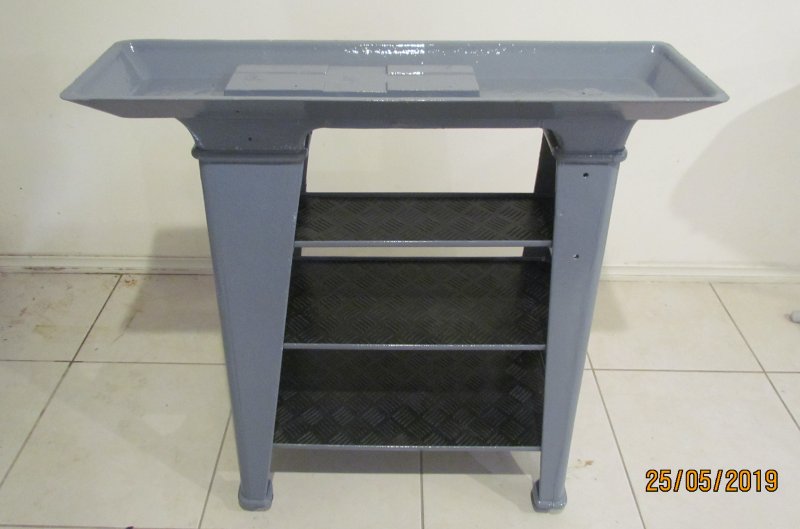 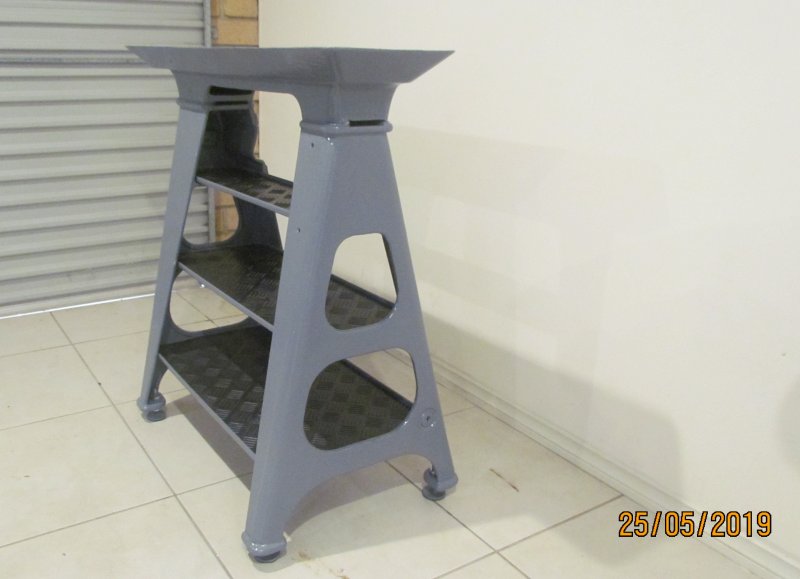 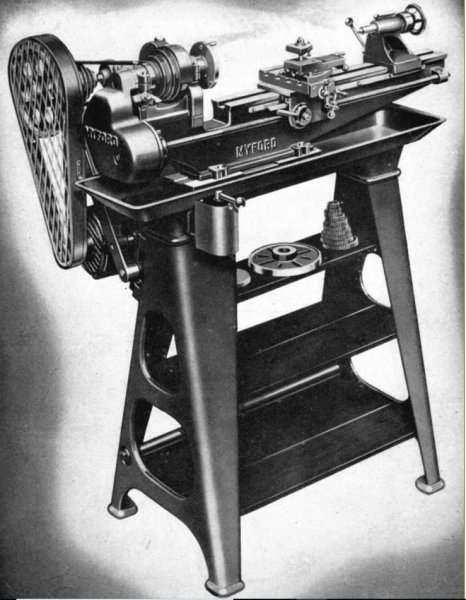 That is a lathe stand from the good ole days. You are not likely to find such a cast iron stand new these days.

Yes its a beautiful stand and restored well,i would like to keep it
I fitted riser blocks to the existing cast drip tray and then made
and fitted a new 3mm drip tray to accept the latest ML7 I have just
finished restoring.The stand has the original cast brkt to accept the myford drum switch 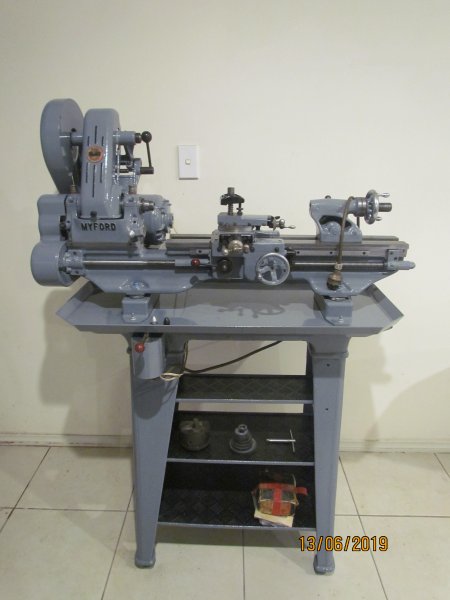