Hi I wish i could cut threads that small nicely. These are purchased items.
K

What size are your manifold and head studs?

How do the lower cylinder liner and cylinder block seal the water channel.
Thanks.
Sition

Hey, the head and manifold studs are M3x0.5mm

The liners are made as a light press fit and installed with some threebond 1215. I put a light smear under the top lip then pressed liner in until the bottom was in the water jacket area then turned the liner as I put another light smear of sealer onto the lower quarter then pressed it fully home. This produced a nice bead of sealant around the lower edge. 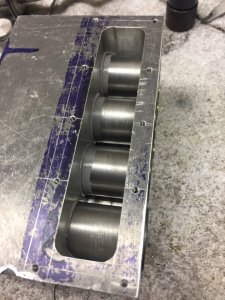 Thanks for the stud thread size. Luckily, I've got a good idea of what a M3X0.5mm thread looks like. I recently bought a tap that size for an insert holder I made for the Sherline lathe.

Aha me too I think I tapped around 100 m3 threads for this engine!

So, I have the engine disassembled again to finalise some plans that me and a friend have been drawing up. This has been very interesting to have a look at some of the internal parts of the engine. I have found some issues that I’m sure will really improve the running of the engine.
Firstly was the seating of the piston rings at least three of the eight rings weren’t fully seated and one was very slightly tight in its groove. I think most of this is down to my poor/ rushed method of making the rings. They were cracked an stretched over a piece of strip then heated until they dropped off. If the rings aren’t heated evenly they will expand more at their hottest point creating a distorted ring. I have now made a new full set of rings and heat treated them on mandrel, lapped the top and bottoms and gapped them according to their individual cylinders.
The next issue to be addressed was that the the big ends had developed a little play. These were assembled with paper shims under the caps initially as they were very slightly tight, now that they have settled down I can remove these shims and that will hopefully tighten up the clearance again. If not I’m sure I could run the caps very lightly on some fine emery to close up any unwanted clearance.

I am surprised at how well the engine was running considering the problem with the rings, I am looking forward to seeing how much difference it will make with good piston rings.

Whilst the engine has been apart I have also been looking into the idea of electronic ignition. This was after finding a dc cdi unit on a 50cc fourstroke scooter I had been working on. I wired up the cdi using a pick up the same as what is originally fitted to the scooter and made up a disk to fit the crank with two trigger bumps on 180 degrees apart. After some time thinking about this set up I had been wondering about the auto advance curve and if my engines running direction wasn’t the same as the original scooter would the advance curve become an retarding curve? Also being that this cdi unit was from a single cylinder and I am firing it twice per engine revolution would the advance curve start too early?
This led me onto a quick search on here where I found focketrys thread Howell V4 from Italy a quick reply and he came back with some very useful information. This will still need some more research and testin my end but it looks like it might be a promising alternative to the expensive model cdi kits. 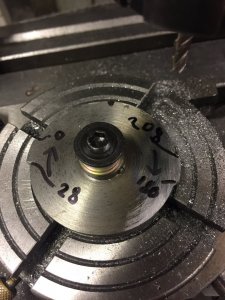