That is how the belt is set up at the moment.
See page 1 for the pic labelled pulley setup.
The small pulley on top is on the left in line with the largest one on the shaper itself.

I tried moving the belt to the next set of pulleys and it was crazy fast!!! scratch.gif

I have not changed the belt position as it is in it's slowest configuration like this.

Some good news thanks to Dave!!! ;D
I found a smaller pulley at home that i modified a bit.
Had to open up the v-way a bit and bore out the shaft diameter to fit the motors shaft.

The new pulley is about and inch smaller than the one it came with.
The difference is amazing!!
Nice and slow and rhythmic, just like it should be!!!

I will be looking for the 1.75" OD pulley as a permanent replacement though!
Enough talk!
Here is a video of it running with the new pulley and i also adjusted the stroke.

And a pic of the surface finish using my first ground HSS tool for a shaper!
Still a way to go but it is not too bad at all! ;D

Thank you to everyone that offered help!!
It was greatly needed and extremely appreciated!!!

Will update again when the new pulley is bought and installed!

Thinking about it for a minute Andrew....I think you could just take that pulley V groove down a bit more and you will be there.

I thought about that too Dave!
Only problem I see is that there is not a lot of meat left on the sides of the pulley.
The v-belt is quite wide at almost 17mm.

I will remeasure tomorrow night and see if there is any room to modify it.

If not I have found a replacement pulley!

This one fits the bill I think.


Just make sure its for the correct size belt......

Anytime you want to drop by to use it you are more than welcome!!!
My door is always open!

lazylathe said:
Will do Sir!!!

Anytime you want to drop by to use it you are more than welcome!!!
My door is always open!

Thanks Andrew!
Next time I'm in Woodstock, you can count on it!

lazylathe said:
*** Ken - I do not live in Vancouver!
Woodstock is in the South Western part of Canada, about an hour from Toronto!
*** Andrew
Click to expand...

Congratulations on your great find! It's a very nice machine and thank you for sharing the videos.

Is there any chance that you found that machine in the Blenheim/Shewsbury area? I tried to chase one down in that area about 3-4 years ago. It was advertised on Kajijji but the owner hadn't listed a phone number and didn't respond to my emails. I got impatient. Postal code info in the ad gave me a rough clue so I drove to Blenheim ("How big could it be?" I reasoned) looking for small machine shops where someone might know some old-codger, who knows someone who could point me in the right direction. No, I don't always think clearly when old iron is involved.

Obviously I didn't get the machine. An email about a week later confirmed that it was sold. Why do sellers torture me like that? The trip was still worthwhile though: I met some great people, stumbled upon a good motorcycle restoration shop (he's done some top-shelf work for me since!), and discovered that the food at Fat Jimmy's in Blenheim is excellent!

BTW, the relative speeds of the forward vs. reverse strokes can also be changed mechanically. Take a look at this YouTube animation:

It's called a Whitworth quick-return mechanism. I learned about this when I made a mistake reassembling a 6-inch AMMCO shaper. IIRC, I think I had to remove the ram linkage slide-block and turn the crank 180-degrees from the "wrong" phase. I'll check my books tonight (I'm sure there is a better explanation for this), but the result is not only a matter of getting the the correct speed phased in the correct direction (less time spent wasted on the non-cutting ram stroke) but also getting the maximum leverage/minumum machine stress in the correct cutting direction.

I'll dig into the books and see what I can find if you like but it looks like you already have it under control.

The minor additions and issues are all just that.....minor and add to the character and charm

Apply TLC in copious amounts and take care of the old girl.....and use her!......these old machines have too much pride to sit idle doing nothing...they would prefer to earn their keep.

Yes it is a Whitworth quick return mechanism. Additionally, the stroke adjustment is marked off on the link. In the first page of this thread with the gear cover off, you can see that.

Thanks to everyone for allowing this tool gloat!!

Without your help I would have this beautiful
shaper running in reverse and much too
quickly!!

Not to stoke the fires of green envy, here is a few pictures of my Rhodes Shaper. Bought it for $100 USD. Original vise.Was setup for lineshaft drive, I have fabricated all the drive parts, all was scrap steel, motor shaft was worn out, welded up and recut to new standards. Figured out the ratios to get 40 rpm in middle gear. Vise needs reground square and plum as someone has been heavy handed in the past. Runs very quietly, finish is seen to be believed.The machine has the lowest serial number so far it's only 820 which puts it well before 1920. Total expenses are still $100 + 2 spray cans of paint. Color is all wrong as its wrinkle black with dark green contrasts. 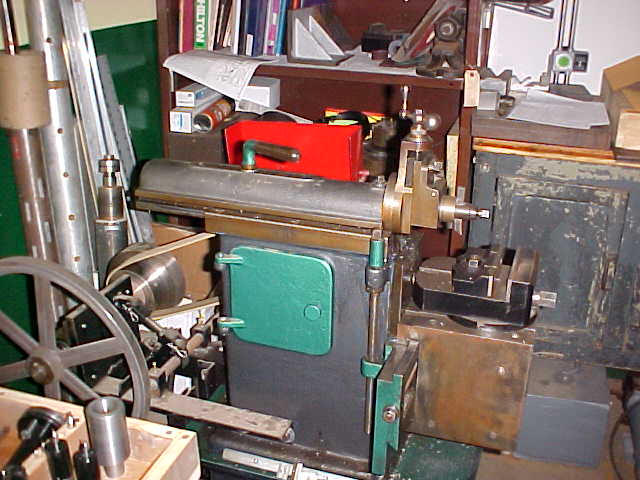 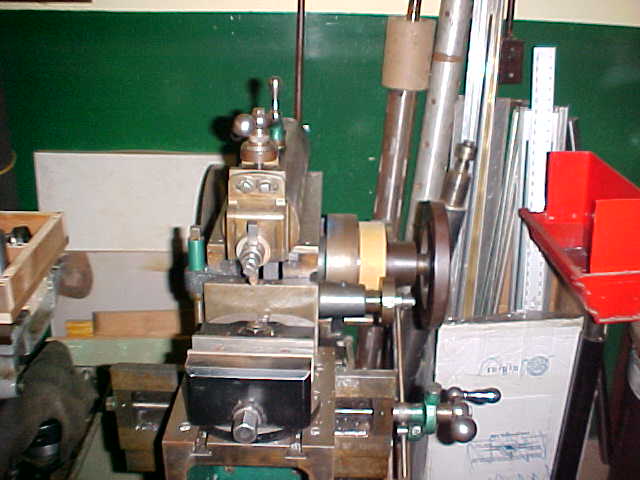 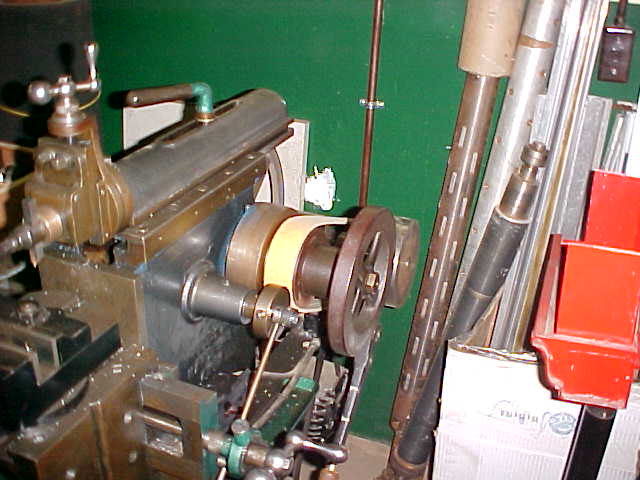 What have you made with your shaper?
"Green with envy"

I am not in the restoration mode at the moment, so for not it will stay machinery grey. ;D

Do you have the in and out table for yours? (yes, that is what it is actually referred to in the manual!)
How about the slotter head and clapper box?

I wish i had the original vise for mine, i am on the hunt for one but i do not hold my breath on actually finding one.
40 rpm would be sweet!!!
Any tips on how you achieved this?

Thanks for sharing your pics!!!

I do not understand what an in and out table is. No slotter head, boy that would be nice! The vise is extremely squat, very solid,but someone has over tightened it so its about .003 out of square and needs ground true and plumb again. 40 rpm is the middle speed don't know what lowest is, and have not done any Aluminum to use the highest speed. The big drive pulley was discarded from where I used to work, it determined the speeds. The flat belt pulley was a mirror duplicate of the original that was on the machine thereby allowing just a speed change without changing belt tension. 40 rpm works out to 800 foot lbs. of torque so there is plenty there. Just use it for general flat stuff, but, I did make a couple of slots that were less than 1 quarter inch wide and around 1" deep. Would have been pesky to do with an endmill.I have actually had 3 other shapers, a AAMCO, the person wanted the shaper and did not take original table so ts a surface plate stand now. Also had an ATLAS, which was more accurate due to sliding foot under the table, and a 8" unknown red shaper that was all rusted fast and needed too much work to restore. All had to be sold because funds needed. Darn.

If you have a look on page 1, second picture you will see an extra hand wheel.
That is what they refer to as the "in and out table"

Andrew,
I am thinking by the description the in and out table works like an x-y table so the work can be clamped and then accurately positioned for the slotter head.

I have both an Atlas 7" and a South Bend 7" and I should be looking for a new home for the Atlas as I much prefer the South Bend shaper.

I am going to pick up a shaper tonight!!!!! ;D :big:
.
.
.
And the sellers description:
For sale is a Rhodes shaper, estimated date of manufacture is 1922. This shaper is a rare machine, was only used to do model engineering work cutting key ways for live steam engines. The slotter has the original tool holder. It is 120 VAC at 1 hp. I have a reproduction of the manual that goes with the machine.
Click to expand...

Andrew - Would it be possible to get a copy of that Rhodes manual from you? I have a Rhodes shaper and the slotting attachment and have looked for years for a manual without success, though I do have several Rhodes brochures scanned into PDFs if you or anyone else wants copies.

Once I get the slotter attachment running, I'll be looking to sell both it and the shaper as well as some extra shaper parts that were included with the slotting attachment. I'd love to keep both but need the space for other tools.