My Bridgeport Rebuilding with modfications

THIS IS THE BRIDGEPORT 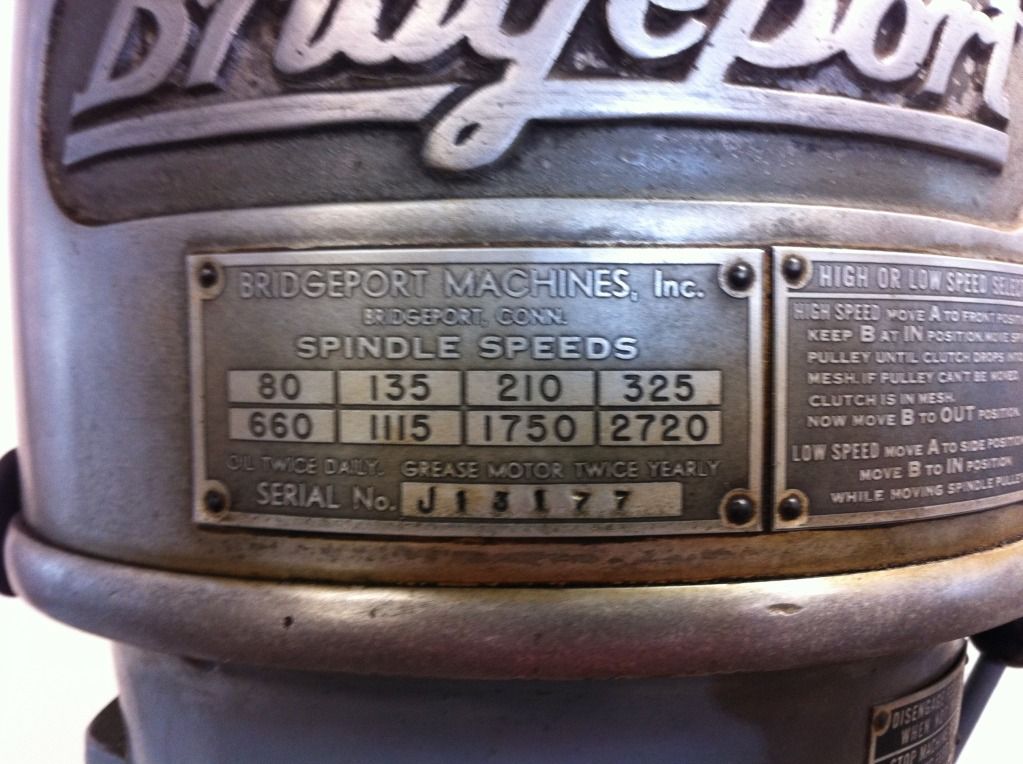 When I fired up my Bridgeport for the first time I knew I was in trouble by the bearing noise everywhere. So, thinking perhaps life could actually be simple, I pulled the motor off. Obviously the first step was to take off the pulley. I didn't have a pulley puller in that configuration and I anticipated it would be a tough one so I soaked it for days in penetrating oil. Today I decided to pull it off. First, I took a brass hammer and drove the pulledy on just a bit more to see that it was going to move. It moved about 1/16" inch rather reluctantly. Regardless, I didn't want to damage it. 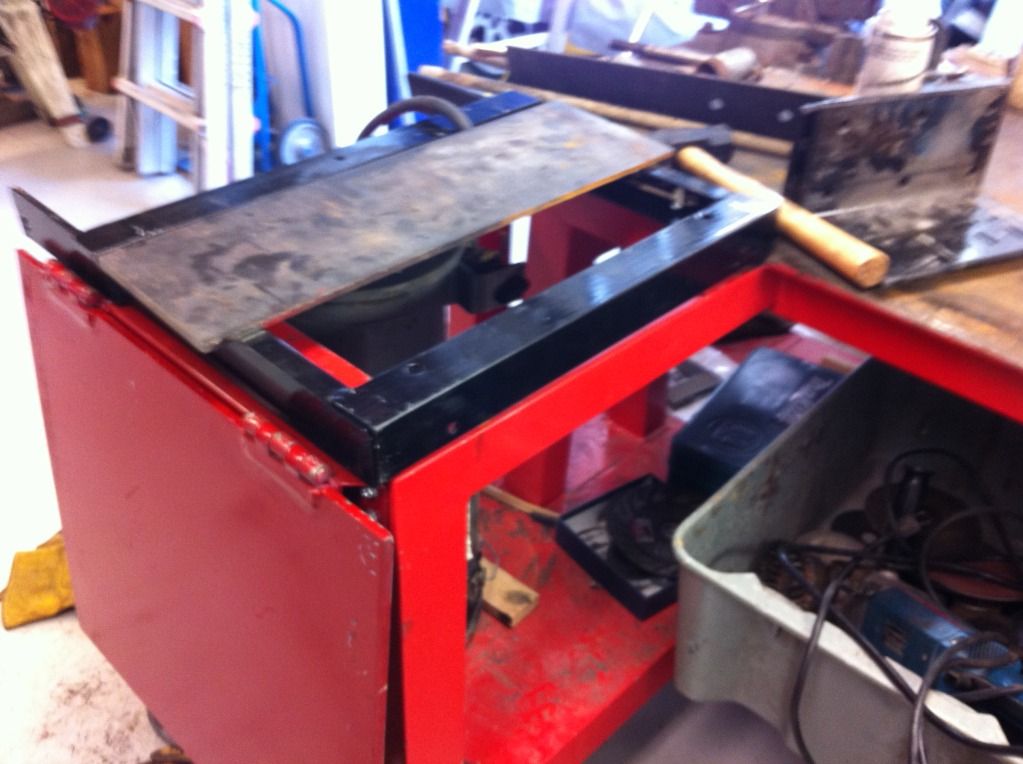 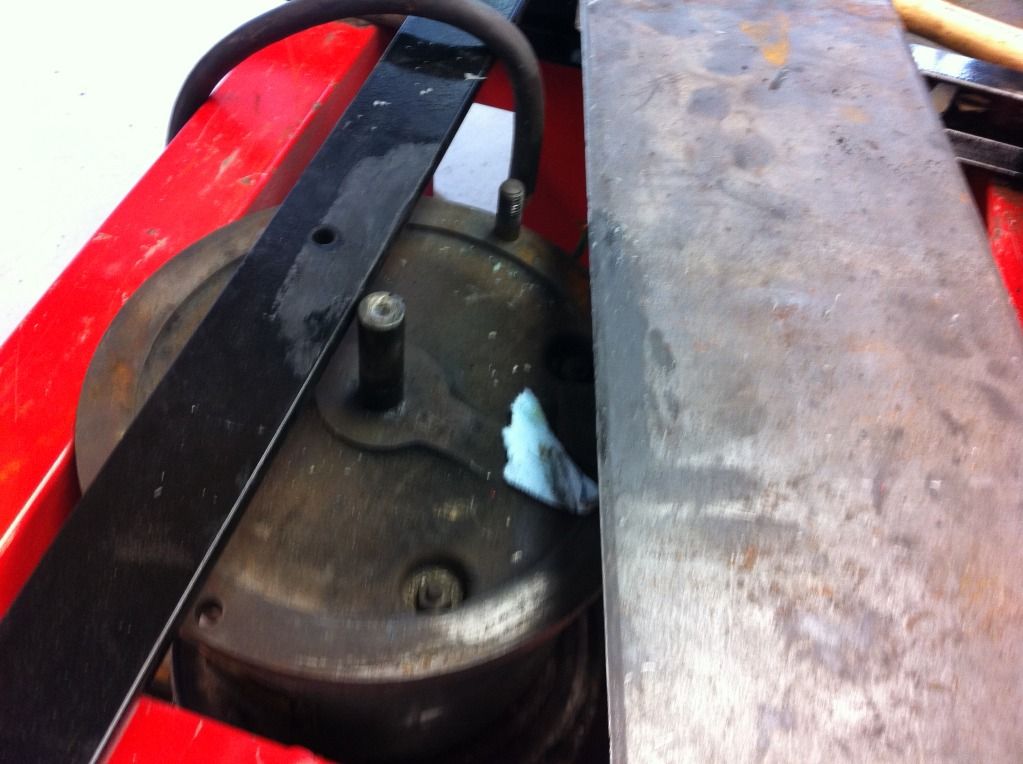 The two pictures above show how I got it off. When I built my welding bench I made a trap door in it for future uses unknown like this one. I put an old fixture on one side of the shaft under the pulley and slid a 3/8" steel piece under the other side. This meant I could get a good flat surface under the pulley, better than a puller would, anyway. With a brass drift I drove the shaft steadily down until the motor dropped on a block I had placed below. I was so careful. 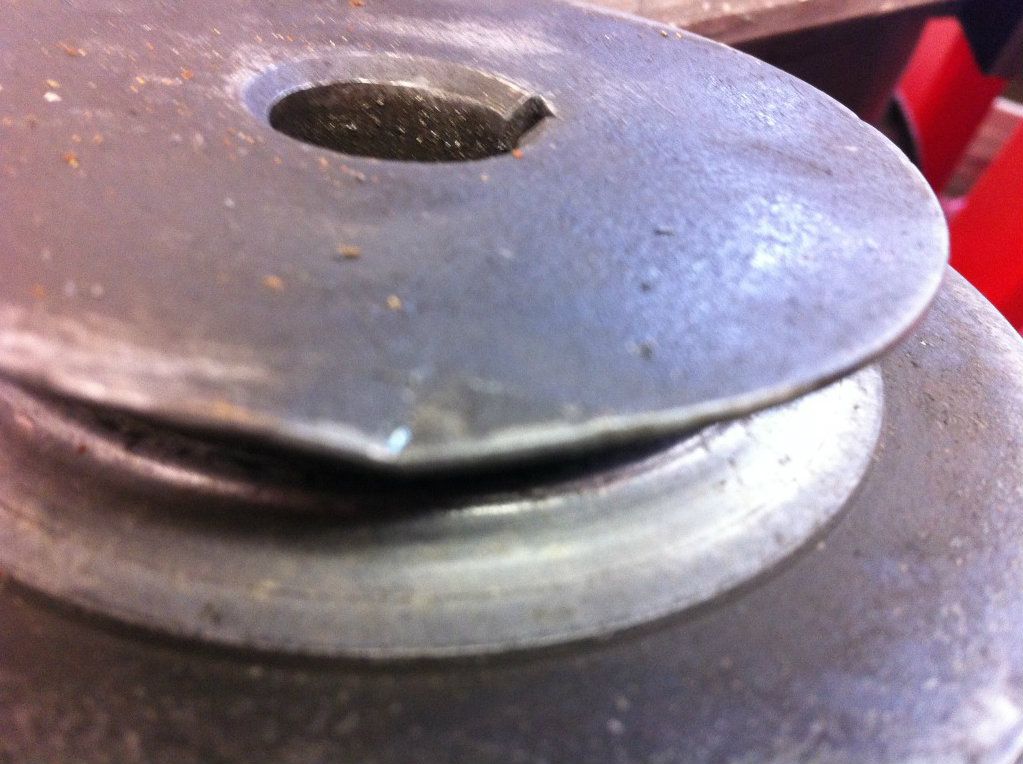 I looked closely at the pulley to see that someone had been there before me and had tried to pry it off damaging the lowest step in the pulley. Another Problem/Challenge. They had damaged the pulley in two places. So, the only thing I could see to do was turn down the damaged part and widen the pulley grooves to compensate. This meant off to my old Logan lathe. 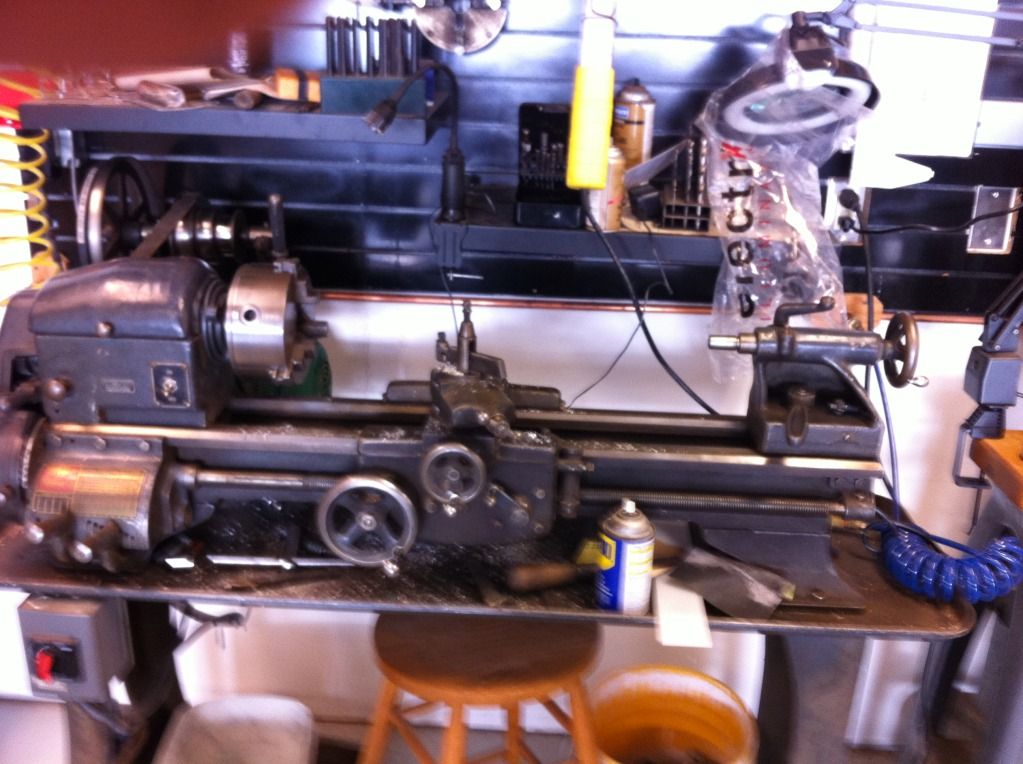 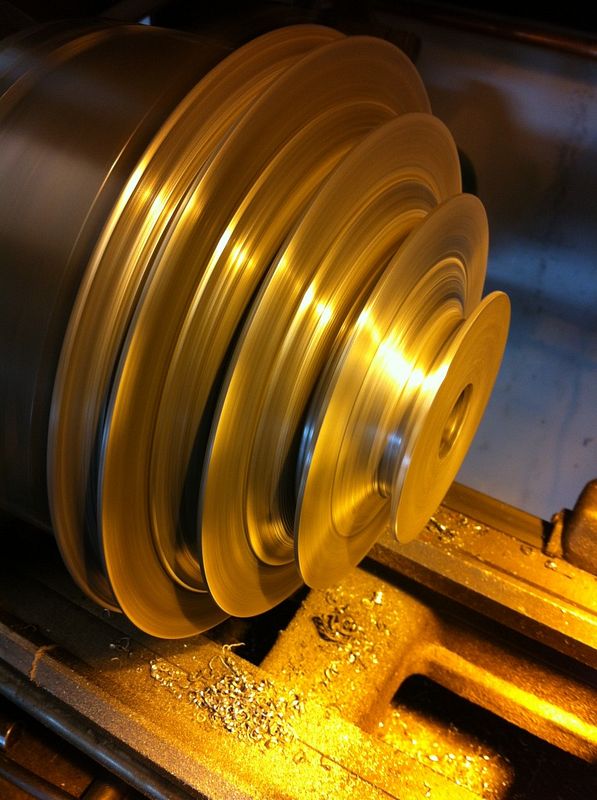 There was enough material left that I could turn take out the broken chunk and then turn and clean up both tapered sides so it would function, even though I will have a somewhat lower gear ratio. 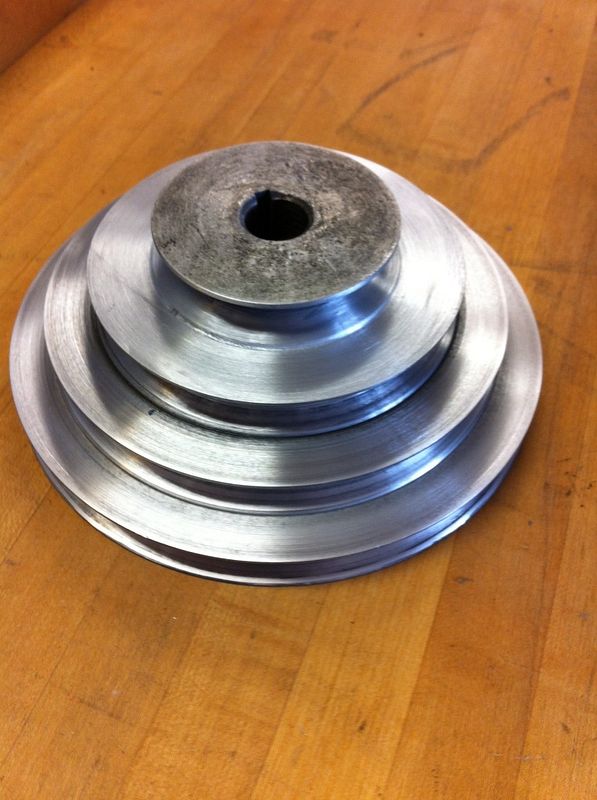 Here it is shown cleaned up ready to be replaced.

The motor needed brushes so I farmed that out to a local motor rebuilder who got the brushes in wrong (no reverse) and a few other mistakes which meant I had two trips back. That is another story.

DOWN TO THE NITTY GRITTY


Anyway, after looking at the machine I decided I needed help. I bought the book listed below from the people at H&W machine. The Bridgeport is really a simple machine but this step by step book will help you through a few spots that are a bit counter-intuitive. Again, I have to recommend this book if you want to make your life easier. 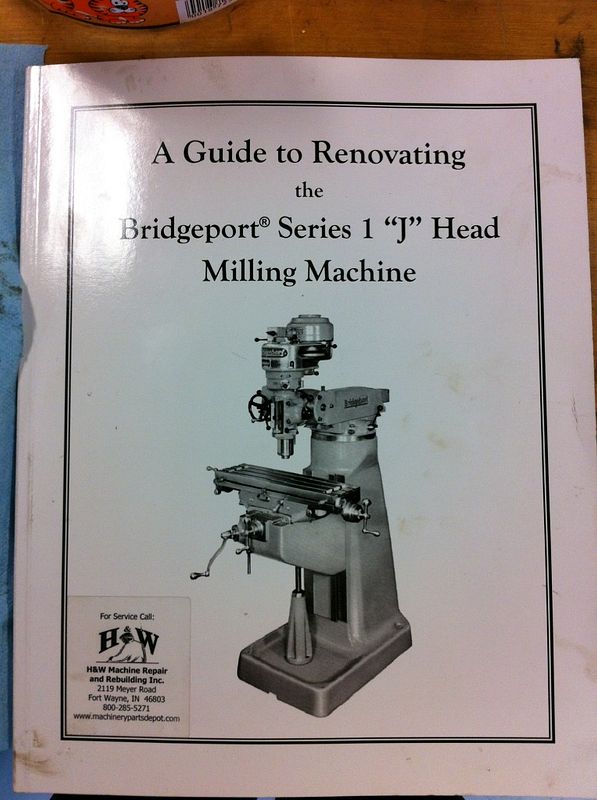 I disassembled the upper part and ordered a rebuild kit from H&W Machine. 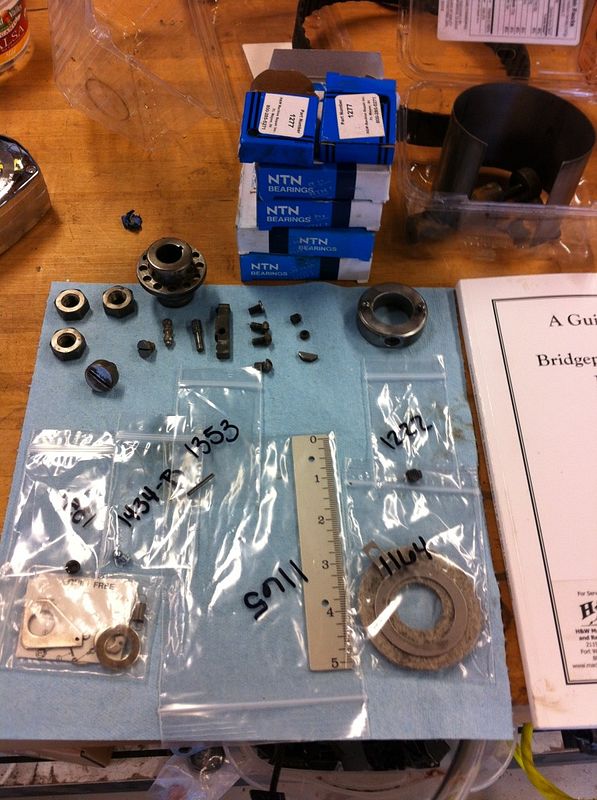 I then proceeded to tear it all down, cleaning parts as I went. The upper belt housing was so filthy inside that I cleaned all out, primed it and painted the inside. In addition the casting was rough so the additional coats of primer and paint will make it easier to keep clean in the future. 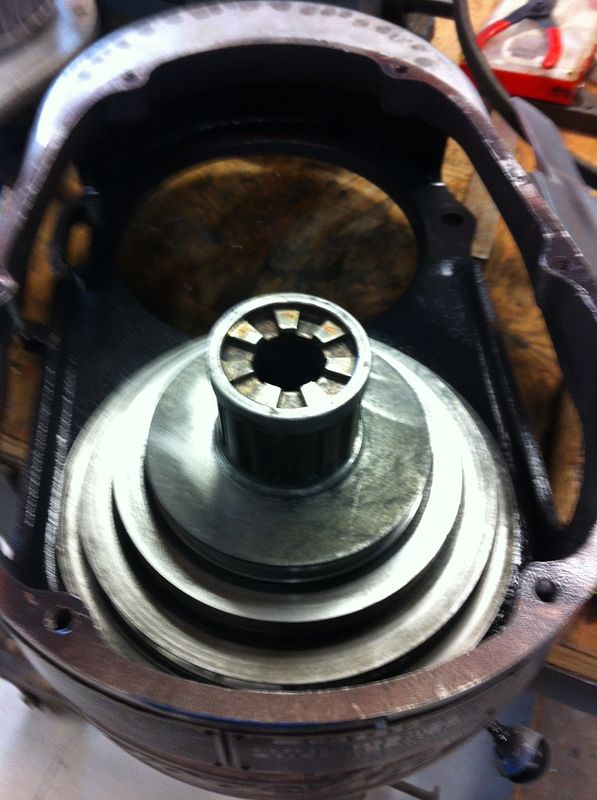 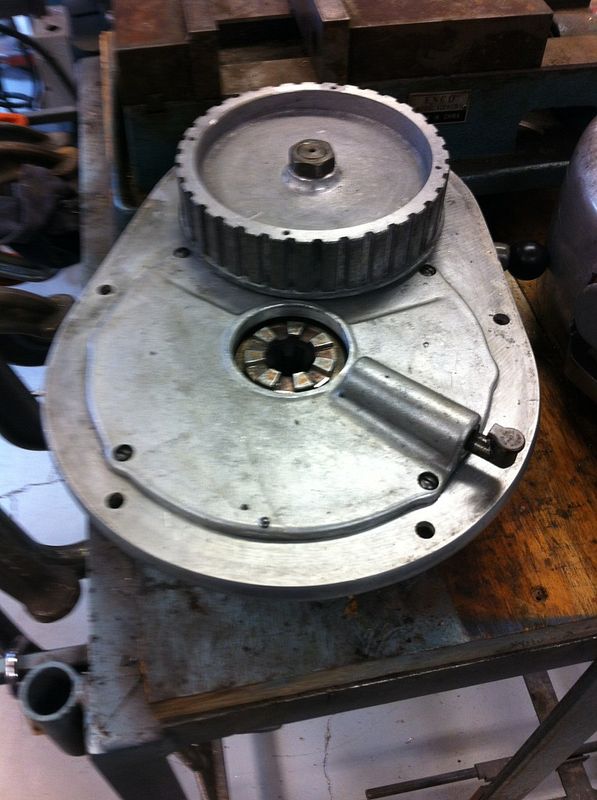 All these assemblies I worked on were put together and set aside after cleaning, replacing bearings. I want to give a plug to the friendly H&W people who have provided me most of the parts for this endeavor as well as the book.

Now I shift my focus to the quill body. I scrub it inside and out and finally give it a bit of shower with this spray bottle. I check the mechanisms and they work smoothly. The pull down gears above are in good shape and so I decide to leave well enough alone. I am convinced that most of the problems with this mill were caused by the previous rebuilding. 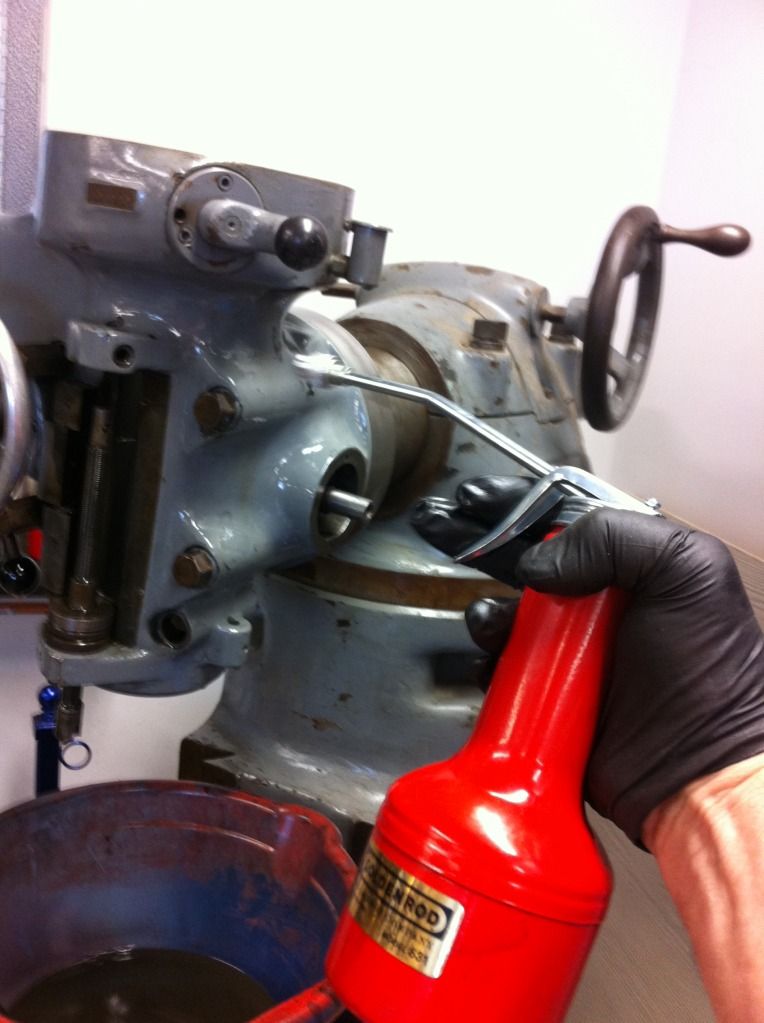 I pull out the clock spring mechanism which didn't seem to want to withdraw the quill and to my surprise it is in pieces. I order a new one from my Iphone from H&W. 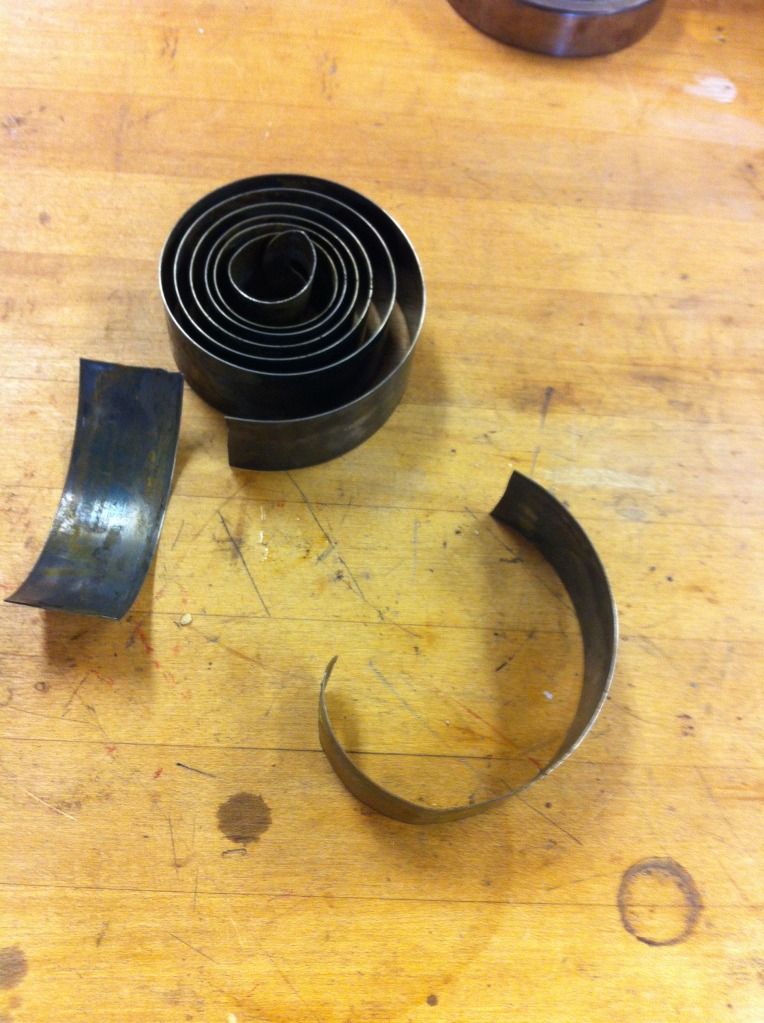 After looking at the cost of bearings for the spindle I decided to let the professionals do it. I package up the spindle and send it off to C&M Precision Spindle.
C&M Precision Spindle has it back in less than a week (I built that bullet-proof box, by the way). These guys do a beautiful job adding two bearings more to replace the spacers. The total cost was not much more than buying the bearings. They are nice folks and invited me to view their place next time I am in Portland. Beautiful job. 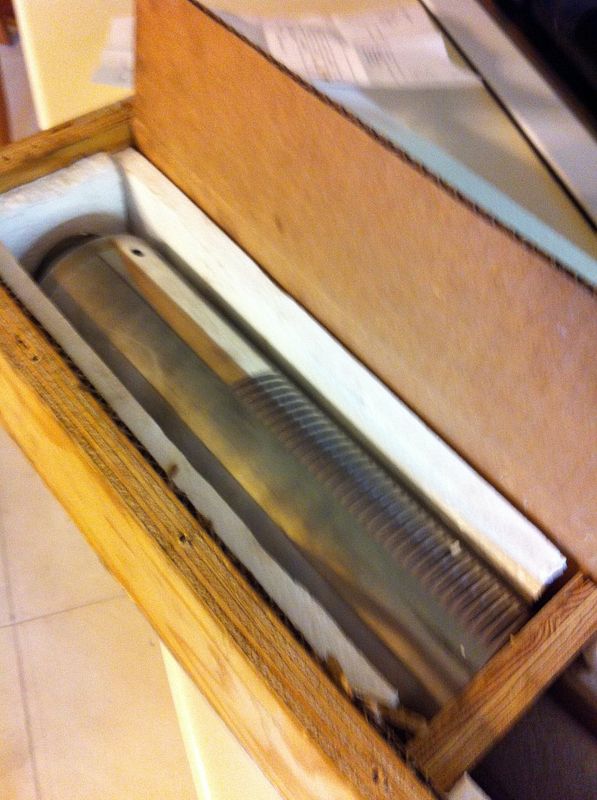 For Bridgeport type knee mills, C&M Precision Spindles special rebuild can make your spindle run smoother and last longer. The key is C&M's 5 pak precision bearings instead of the ordinary 3 that most manufacturers do (as shown in the illustration).

After the five bearings are installed, the spindle taper is R-8 precision ground in its own bearings .0002 concentric.

Bridgeport Lubrication:
I had been told by several rebuilders that the Bridgeport oiling system left something to be desired so I decided to make some modifications after receiving my rebuilt quill assembly with instructions to keep the oil off the sealed bearings as it seeps into them and ruins them. In addition, I was told that the lubrication system did not adequately distribute the oil. So, I decided to make a few modifications. Here is the before picture. 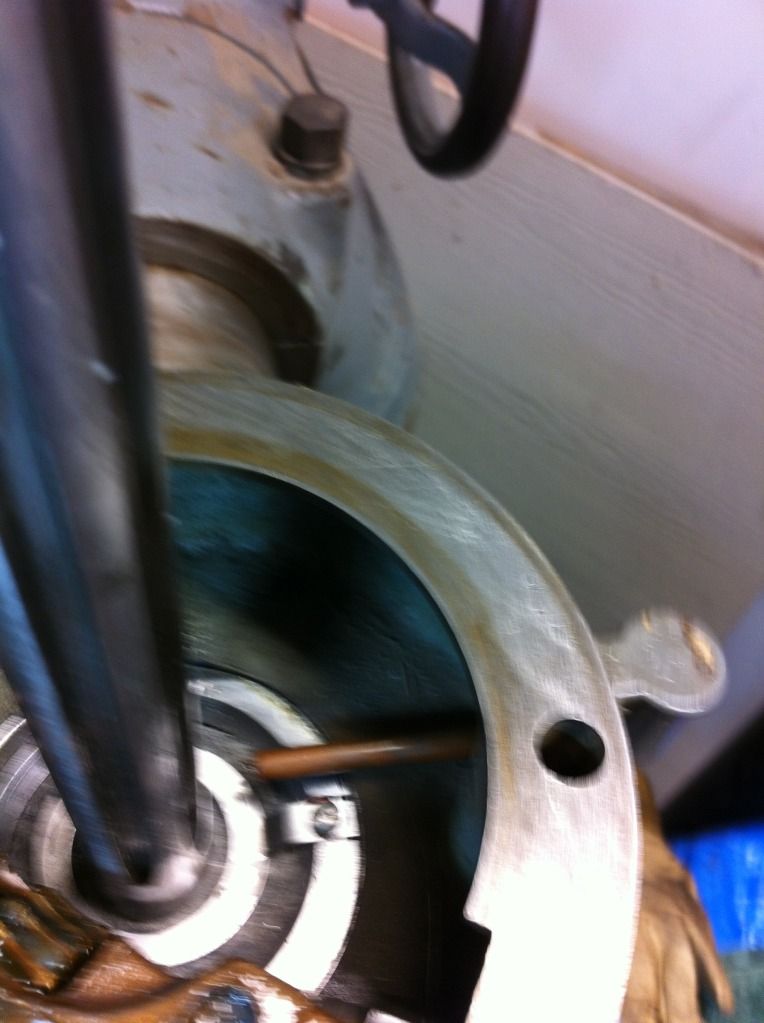 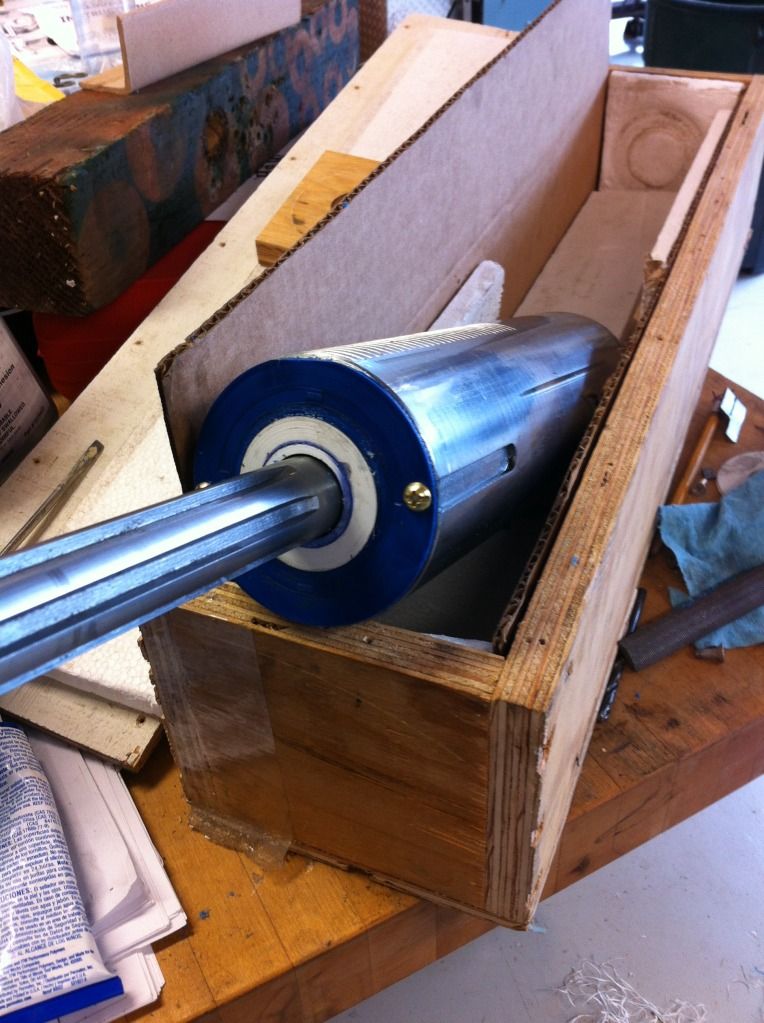 It is shown here inserted into the quill body. 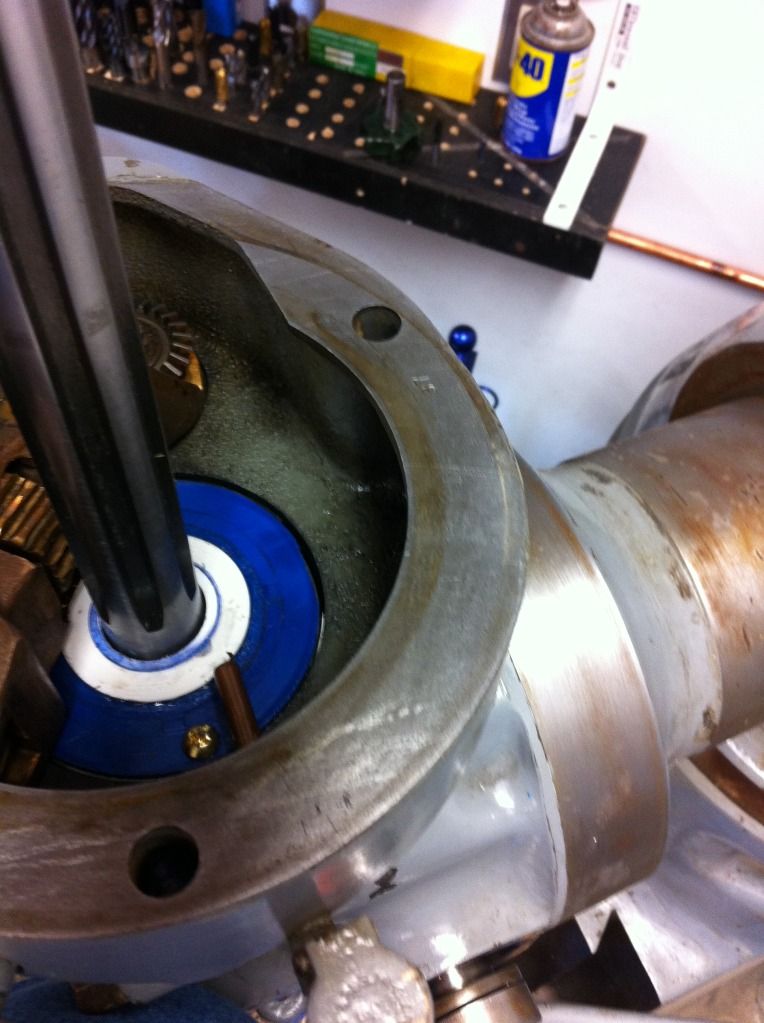 Finally, I shortened the tube on the lubrication cup. 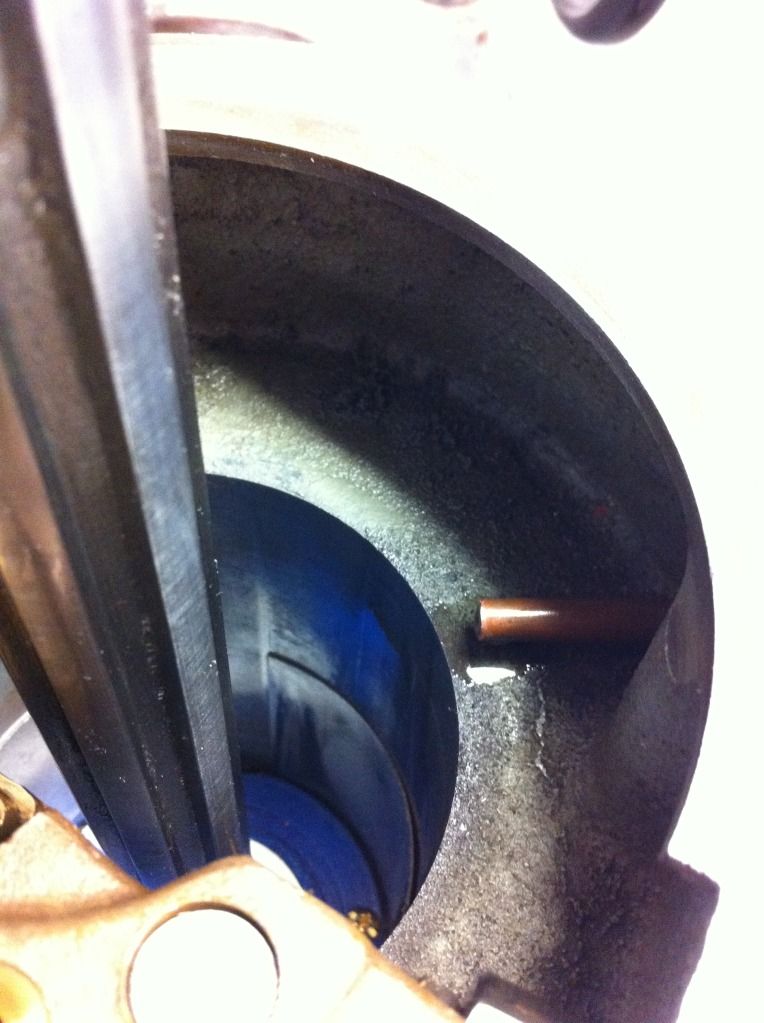 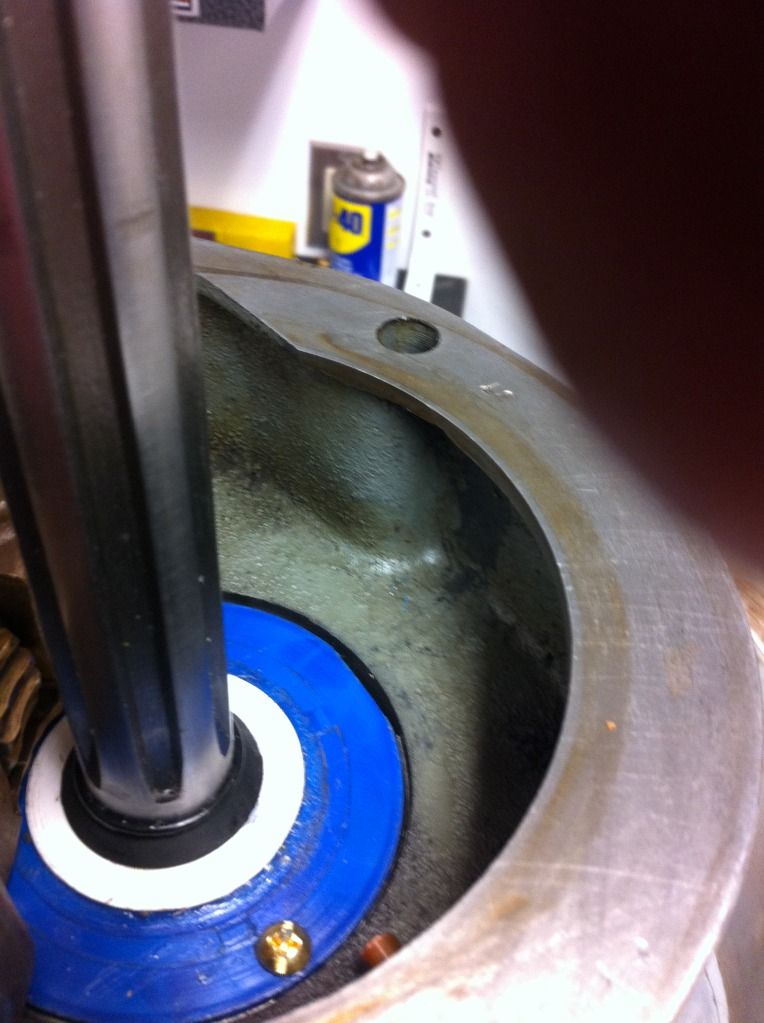 So, to this point I should have eliminated most of the oil going down into the quill bearings. I wanted to provide some point lubrication for the feed gears and bearings so I drilled and tapped a 1/8" NPT thread where I could insert an oil tube to the right length (I recorded these for the future). 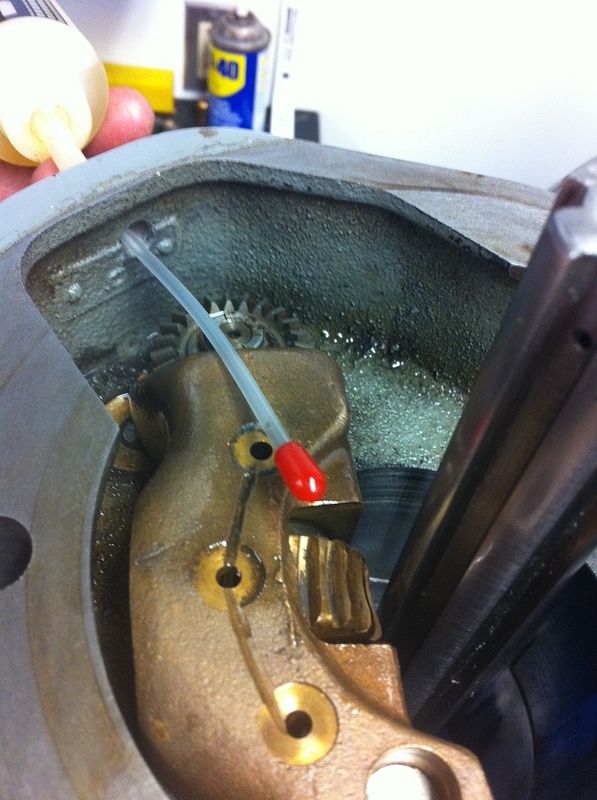 I will write myself a letter of lubrication instructions since all of this will be enclosed and hope I can keep everything well lubricated in the future.

By the way, I posted my changes on another forum and created quite a controversy. Some people loved it and some ardent Bridgeport loyalists disputed the claims that Bridgeport mills ever had any problems.

After working on each of the components, cleaning, replacing parts, and painting as needed, I put the parts together. It is finished. At least the head. It is amazing how smoothly the new bearings run in comparison the the old.

There is a tremendous time gap from the last notification (except the Bridgeport lubrication post). I had a few problems here and there from abused parts but all and all the book walked me right through it. Most of the problem was in the bearings and some abuse from the person who rebuilt it before me.
There were quite a few delays here and there as I waited for parts that I found needing replacing. C&M precision rebuilt the spindle in a timely fashion.
I didn't do anything to the lower end, figuring I would see how precise it ran in operations. Notice below I picked up an 8" Phase II rotary table. I was amazed how precisely it moved. 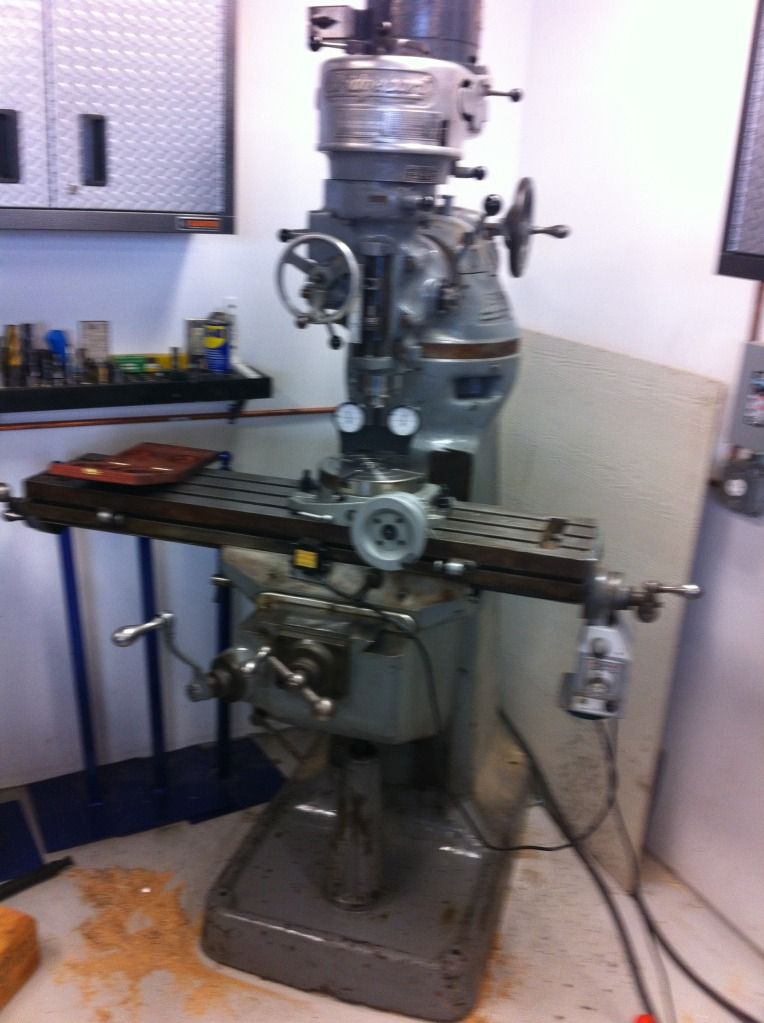 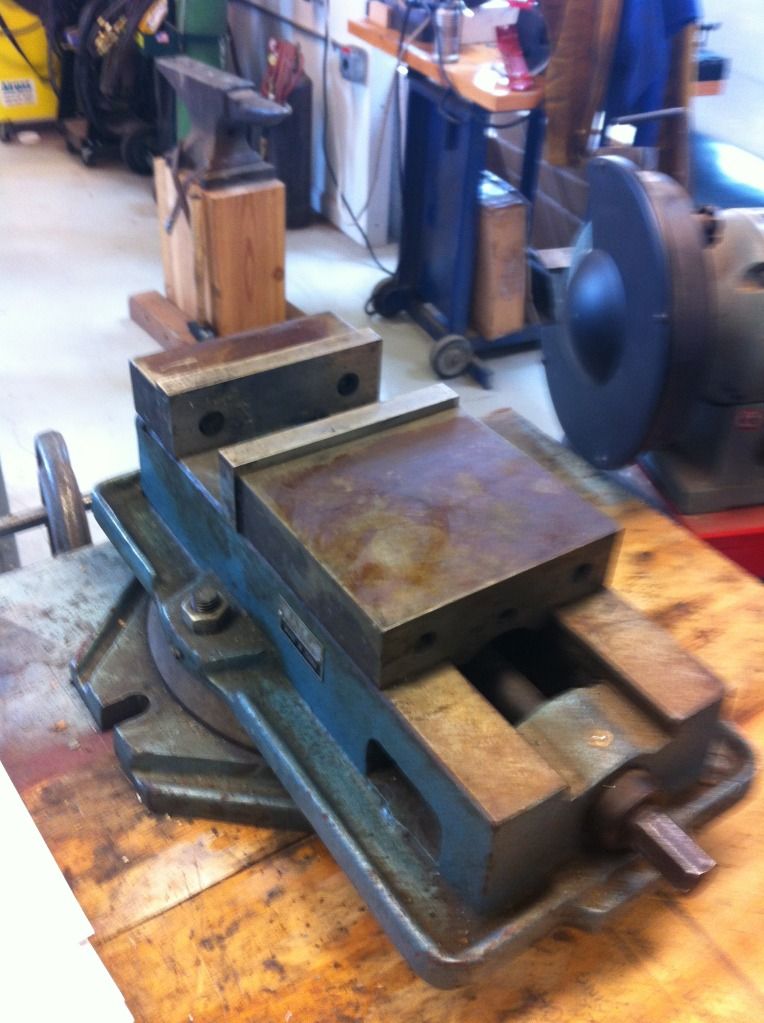 Laborlots, I should have kept track.
Delaysquite a few waiting for parts.
Was it worth it? I think so. Your observations?

Was that round ram original, or was the ram/turret replaced?

I have a pulley J-head and recommend using a VFD to run it. Much nicer not to have to change pulley sheaves.
M

kvom said:
Was that round ram original, or was the ram/turret replaced?

I have a pulley J-head and recommend using a VFD to run it. Much nicer not to have to change pulley sheaves.
Click to expand...

I believe it was original.

I plans to use a variable speed, permanent magnet D.C. motor. The old brush motor is quite noisy. It is single phase as well.

I agree, controlling the speed with a VFD or D.C. motor is great. I used a 3 phase motor with a VFD on my Logan lathe.

Nice work!
Do you have any idea how much your quill and spindle assembly weighed when you sent it off to C&M?

I don't remember the weight. I think shipping via FEDEX cost around $20.

Jim
You must log in or register to reply here.