As is often the case on a project that has a lot of mis-starts and re-starts, contemplating the NEXT project is always much more exciting. Something new and shiny!

I've seen several threads about diy dynos, some successful, and others, not so much. I like to think the theory through, just enough to convince myself that the new project is a great idea and I should dive right in, LOL. A minimal amount of research, and a lot of spreadsheet calculations must obviously be done, because that is the fun stuff. Then, after a few weeks, and having a very squishy plan in my notebook, I will look into what others have done, and what might even be available for purchase. Because my time is worth..... zero....???.... , anything that is more expensive than the cost of the materials is too expensive. (Still making the same mistake.)

I noticed in one of the junk sheds an old recumbent exercise bike that had "Programmable Magnetic" emblazoned on the side. After some very brief troubleshooting research online, I stripped the side covers off and discovered that the magnetic brake "load" was much smaller than expected (one of those "point and laugh" moments). But after some quick calcs, it looked like the brake might be good for a steady 700 watts or so, which seemed reasonable because it was a good bike, and 700 watts is in the range of what a fairly fit person can sprint on a bike.

639 watts isn't that great, but the magnetic brake inside the flywheel only has 2 permanent magnet shoes, 2 more could be easily accommodated. The brake-shoe-shaped permanent magnets do not rotate so their exploding is not likely. They ride inside the flywheel like a pair of brake shoes, but there is no contact inside. The resistance force is increased by moving the magnets outward so that they almost contact the steel flywheel. Resistance is reduced by retracting the magnets, using a tiny motor to pull a small cable that pulls the magnets toward the center of rotation.

So, if the engine is at a steady rpm, the magnets can be used to brake the flywheel enough to pull the rpm down, and the torque-arm reaction of the magnetic brake framework will yield a measurable torque, which combined with rpm, will facilitate calculation of HP or watts.

It sounds feasible, but I will have to sleep on it several nights. Because I want to document the output of a small, slow diesel, I think having the capability of measuring steady-state torque is paramount.

Here are pics of the cannibalized exercise bike. A different type of dyno might work better, but I don't know. The magnetic brake assy is 9" dia flywheel with the folding rule across it. 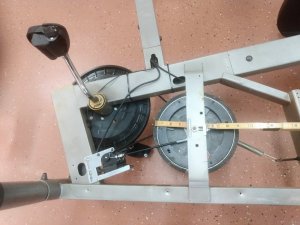 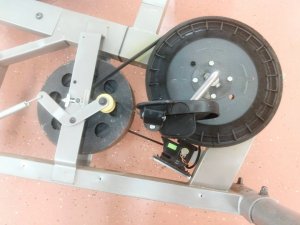 Any thoughts?
Thanks,
Lloyd

So I slept on this DYNO idea a few nights, did very minimal research (almost none on this site), but studied the math (mechanics/dynamics/rotary motion), pondering inertial dynos vs absorption dynos. I think those are two main groups, with the inertial variety measuring how fast an engine will accelerate a flywheel, and the absorption measuring the torque produced while trying to hold the engine back (absorbing the power).

I came up with a spreadsheet to do some dyno calcs, based on the type of instrumentation that would be needed. I also machined a pile of parts (in my head) to see how complicated each type would be.

I have not yet looked at any of the in-depth material that Lorhing Miller has presented, touting the merits of the inertial dyno. He said they are easy to build and instrument, and much less complex than the current absorption style of dyno. I thought, ok, well... maybe... but I'm not going just take his word for it, I might as well re-invent the wheel. But you know what, I am pretty sure that now I agree with him! Thank you Mr. Miller !

==================
Here is a spreadsheet and graphs of the performance three hypothetical engines if they were attached to the 3.38kg flywheel, with a mass moment of inertia of 0.0355 kg-m^2, that is now on the exercise bike. Initially, I thought it would be too light weight for the task, but after running the numbers, maybe not.

The theory (in my mind) is to directly couple the engine to the flywheel, probably through some type of simple clutch. The only sensor needed on the dyno would be one to record the flywheel RPM at a sampling rate of maybe 4 times per revolution?? The math is really very straight forward, and is shown in the spreadsheet. The flywheel's RPM is measured. The Kinetic Energy of the flywheel is calculated. Then a few milli seconds later the RPM is again measured and the KE is again calculated. The change in KE (in Joules) over that increment of time is how much KE the engine put into the [edit, flywheel, not engine] flywheel in that delta T period. The Joules per second that were input is the watts that were input during that delta T. And, 746 Joules per second equals one horsepower. Torque is then calculated from the moment of inertia and the instantaneous angular acceleration, that is calculated by the RPM increments.

The 3 sets of data in the spreadsheet below are all hypothetical, but show trends. I made up the "delta time" for HP-2 sample to make a pretty HP curve and then made another graph twice as fast, and another twice as slow.
Learning is good. 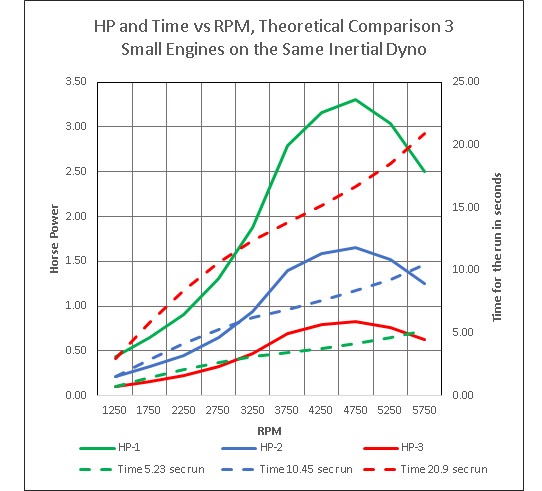 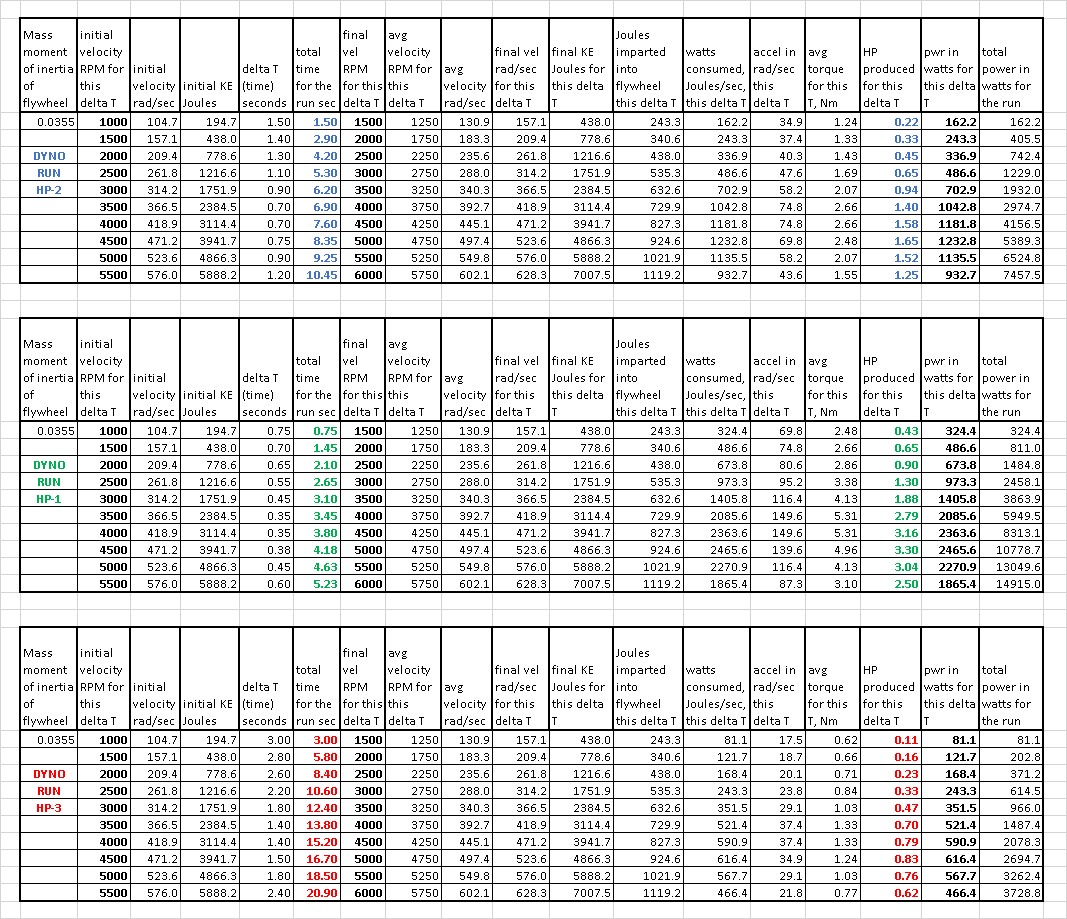 Note- I have not yet reviewed my math carefully, so there could be some errors, including hsing final values instead of average values. In actual application, the Delta T values will be less than a millisecond.
Last edited: Apr 18, 2022

What exactly are you planning to test? What are you hoping to accomplish with these tests? A dyno is a tool unless you want to build one as an experience in itself like people who build lathes. I've used a dyno as a tool for engine development like most people use one. I've built both an eddy brake and inertial dyno. I briefly used a water brake dyno for one series of tests. An inertial dyno is far easier to build and use as a test device for small IC engines. Ours was trouble free over thousands of runs.

Problem with an inertial dyno is that it for short term,get some numbers and shut it down. A magnetic or water dyno allows laonger runs and longer tests under specific conditions.

lohring said:
What exactly are you planning to test? What are you hoping to accomplish with these tests? A dyno is a tool unless you want to build one as an experience in itself like people who build lathes. I've used a dyno as a tool for engine development like most people use one. I've built both an eddy brake and inertial dyno. I briefly used a water brake dyno for one series of tests. An inertial dyno is far easier to build and use as a test device for small IC engines. Ours was trouble free over thousands of runs.

Lorhing, Your statement about the experience of building one describe the main goal. The science, planning, the process, integration of the mechanical and micro processor, etc. The finished product is secondary. I am in the process of building a true diesel engine, and realistically, it is going to take a while. Having a second challenging project to work on when the first gets frustrating is helpful.

I see the dyno pics that you attached, and confess that I have not researched them completely. Is the first pic, with the discs, an absorber/prony brake type? That looks like a series of disc brakes with a small lever arm that controls the pressure of the brake shoes. The second pic with the engine with the huge expansion chamber caught me off guard. I was thinking, "He isn't wearing hearing protection !," but then saw the muffs laying on the bench at-the-ready. And the 3rd pic, what can I say, ha ha.

So, overall, this is firstly, an educational project, and the inertial dyno covers all the developmental bases, without the complexities of power absorption. I am looking forward to it, even if I only test a few electric motors with it.
Lloyd

kf2qd said:
Problem with an inertial dyno is that it for short term,get some numbers and shut it down. A magnetic or water dyno allows laonger runs and longer tests under specific conditions.
Click to expand...

The dyno with the disks is an eddy current brake. It's made from old hard drive parts and the magnets are lowered between the disks to increase the brake force which is proportional to the rpm.

Below is my advice for building inertial dynos. The Performance Trends web site has information as well. A detailed article on the construction and operation of our inertial dyno is in issue 15 of Model Engine Builder.

Lohring,
Thank you for so graciously sharing this in-depth information. I went ahead and ordered the digital copy of issue 15, also. It was reassuring to see that the spreadsheet calculations that I had come up with did not disagree with what was in the referenced information. This will save me from going down too many dead ends.
Lloyd
You must log in or register to reply here.

O
Lower cost design for a water brake for a dyno.
2