So I haven't been too active on this forum lately as time has been an issue. I'm still plugging away at my latest mill engine, but woodworking has also gotten a strangle hold on me lately. After a couple of months of getting back into wood working, however, I've realized that even though it's more forgiving and easier to fix than metal most of the time, it will still jack you up. Never for an instant think to yourself, "this tool is too cute to kill me." I was working on a guinea pig cage (I know super manly) for my wife. I actually wound up putting a brad strait through my hand. To this instant I'm not sure how it happened. I'm just glad it was a 1 1/4" brad and not a 16p nail haha. It didn't hit the bone and since it was the finger, even as a registered emt, I wasn't worried about pulling it out haha. But let me tell y'all something, folks. It squirted. I admittedly got cocky. I was used to doing all this awesome stuff with metal and I let myself underestimate something that I even had personal experience with. I went to toenail a board in, and a brad went strait through the bottom of my left index finger and out the nail. So metal related or not, I'd like to remind all of you, especially the younger guys that misuse tools in the name of not buying new ones, that this crap really does happen. I've done construction for years without incident, but all it took was me learning a new skill to make me complacent. As a result it's taken about half an hour to type this. Anyway, mostly I just wanted to say hello to you guys, even if it was through a "that shouldn't have happened" type thread.

Good to here from you . Glad the injury not serious.

One of my customers requires a safety Task analysis be filled out before starting any job. I admit I hate filling them out. But i do believe it is a good idea to think about every step of the job, potential hazards and what you need to do to mitigate each hazard.
Tin

Yeah, sh.. happens, I've learned over the years to watch out for ricochets from all types of nailers. Sometimes the nail will hit some tough grain or another nail and curl right back through the surface, especially with brad nailers. I've had framing nails whiz past my head or sometimes whack me almost anywhere. The usually don't leave much of a mark, but do smart a bit. Powder actuated nailers can also be scary at times.
I have a friend, a roofer, who nailed a shingle to his leg, right into the bone.
Once, while framing steel stud I screwed my thumb right to the pieces I was connecting, and yes, I had to reverse the gun to get free. I don't think it went thru the bone, but seeing a blood mark where the 7/16" framing screw hit the inside of my thumbnail about dead center, from the other side, it had to be close. No, I didn't go to the doctor, I just sucked it up and kept working as I normally do when I get cut. My first aid kit is normally a piece of paper towel (or toilet paper) and electrical tape.
Not trying to be a tough guy, but if you work construction, you will be wounded, usually daily.
Not a nailer either, but my son put a sawzall blade right thru his hand, between the bones. Looked pretty ugly, but only took stitches.
I could go on, I only wanted to comment about the nailers, but it got me to thinking, sorry.
GUS

Just a quick add on. Tin's post showed up while I was ranting, got me thinking again. I'm all for job safety. After 40+ years in construction I've seen a lot of accidents, I've had my share, and a good percentage could have been prevented had it not been for the human factor. People cause accidents, in spite of all that is done to prevent accidents or at least help protect those involved. Whether it be safety training, safety equipment or safety analysis. It's just human nature. The morning news will give you the daily carnage. Highways are being made safer, cars are being loaded with safety equipment and still, we humans, manage to maim or kill ourselves in in auto accidents daily.
It's seems like being careful or safe is a matter of how much inconvenience it causes, such as hanging up a cell phone, buckling a seat belt or simply going the speed limit, or things like getting a taller step ladder instead of top runging as we call it. I actual saw a guy, reaching over his head, taping drywall while standing on a spackle bucket perched on a plank on 5 stages of scaffold in the center court of a mall I was working in, no harness either.
Once, while top runging and over reaching, I took a 12' plunge, thru a suspended ceiling, hit my ribs on a scaffold on my way down and landed on my side on the concrete. No real harm done, a few bruises and cracked heel, I knew better than to do that, but I did it anyway.
Hey, I'm only human.
Last edited: Apr 4, 2014
I

To follow on from Generatorgus, there seems to be a normal level of accidents in the wear and tear category and then there are the really dumb acts which serve to adjust the gene pool.

An example of the latter occurred a few days ago and was reported in the BBC World News:

&#8220;At least seven people were killed and 19 injured when a suspected World War Two bomb exploded in a scrap metal warehouse in the Thai capital, Bangkok.

Construction workers found the bomb and sold it, believing it was inactive.

Warehouse workers used a blow-torch to take the bomb apart and detonated it in the process, reports said.

The massive blast destroyed the shop and created a large crater. It also damaged nearby houses and started a large fire.

Thai police said that five people died at the scene.

"The warehouse workers thought the bomb was no longer active so they used a metal cutter to cut into it, causing the explosion," local police chief Virasak Foythong told the AFP news agency.

I suppose that means we have one less place to pick up small bits of scrap for our projects.
B

Brad nailers can be nasty when using long brads and harder or variable density timber. I also have learnt to keep my holding hand the length of the brad away from the gun. It really smarts when you suddenly get attached to the work when a brad deviates. 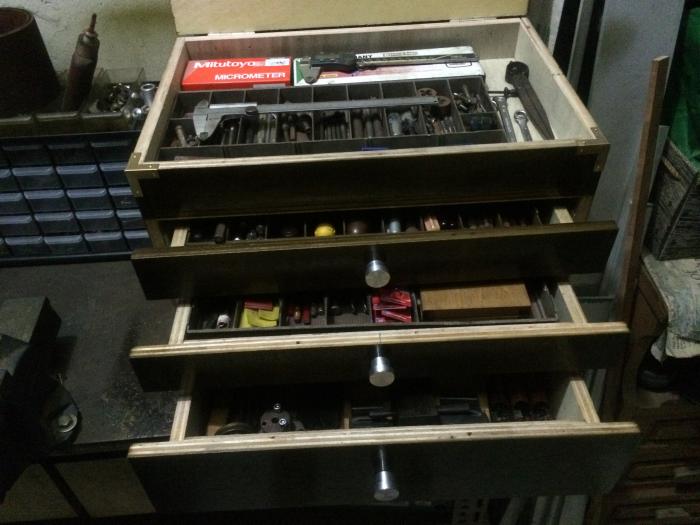 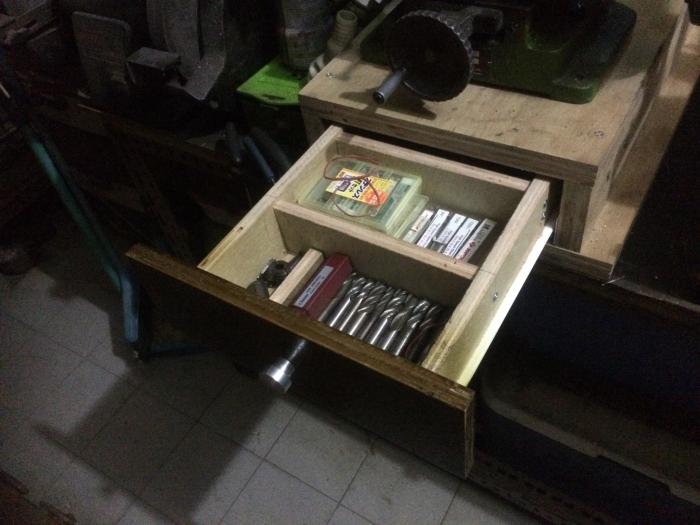 I had a small brad bend in the wood and hit my thumb where I thought it would be safe. It hurt just a bit.

barnesrickw said:
I had a small brad bend in the wood and hit my thumb where I thought it would be safe. It hurt just a bit.
Click to expand...

Can I imagine it was like hitting thumb with 1 pounder hammer. It doesn't end there ,the trapped blood below the finger nail must be bled thoroughly. Failure to do so means having the thumb to thump away painfully throughout the night with your heart beat.

My worst "stupid" moment....Pumping away, overly fast, with an old-fashioned pump-drill. Just had to drill that 1/16" hole....had to hold the work with my hand! The drill lifted out of the work-piece on the upstroke, and plunged down through my thumb on the down-stroke. Ran around the basement shop with a pump-drill bit attached to my thumb. While still bit shocky, I closed my eyes as I pulled the drill bit out of my thumb with some pliers, then threw myself onto a nearby chair to regain my composure, to contemplate just what happened, and to marvel over my imbecility. I was 14 years old, and I still cringe when I think about this/my moronic episode. I was very lucky....it could have been a whole lot worse. Lesson learned: Tools and metal will not be stopped by flesh.

Worst pain, ever..... from blood trapped under a thumb-nail (which I caught in a taxi-cab door). My thumb throbbed in agony and with every heart beat. For two long weeks, I had to walk around with my hand elevated to alleviate the throbbing pressure (it's a good thing that I didn't smash the nail on my middle finger) until I drilled a tiny hole into my thumb nail with a wire-drill. Just pressing the drill bit into my nail killed me, but I slowly twisted the wire-drill between my finger tips, until it broke through the nail. Blood squirted out and my thumb was instantly relieved from the terrible pain.

That was all a very long time ago. I like to think that I became much smarter, but accidents happen when you least expect them. 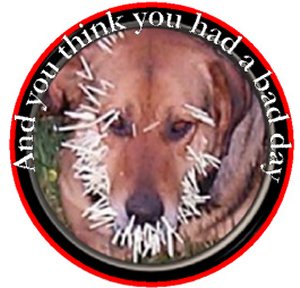 BronxFigs, I've used that method to drill through my thumbnail in the past, instant relief.

Swifty said:
BronxFigs, I've used that method to drill through my thumbnail in the past, instant relief.

I am very fortunate to have married a nurse over an accountant. Nellie has so many cures for all my pains. If I ever get married again,I'ii marry the same of girl.
Toe blisters and bad thumb nails fixed by Nellie. What shall I do w/o Nellie???
E

Yes, it is so easy to have an "Oops" moment. I had one on the 8th of this month. I lost concentration for a split second using a table saw. Lost the middle finger, severely cut the index finger and severed both tendons, the artery and the nerve and almost cut the top off my thumb. 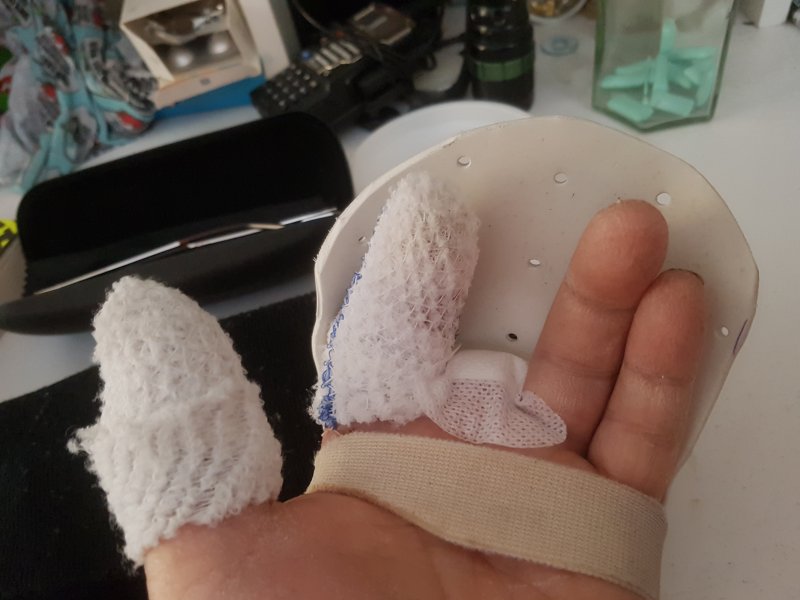 Damn, Norris, you win! Don’t think that can be topped!
1

That certainly wins the OOPS for the month! Owweeee...

Where are the pictures of the wife's cage?

Brads and airnailers .... had a ricochet once , hit me in the eyebrow and had to pull it out in front of a mirror .
Kids said something like cool dad , thats a piercing .
Stil shivering , 1/2 inch lower and I would have lost an eye .
M

I have had a nail from using an 16g air nailer curve around and nail my finger.
I have also thought I had the proper length nails in said nailer and caught my finger on the back side. I have been working with tools and machinery my entire life and still screw up on occassion.
Safety first is not just an idea.... its a way of life. Such as tieing my long hair back when working on my lathe in the garage. Or wearing safety glasses. I may look the fool to some people but I look much better than someone who got mangled by being lazy. Accidents happen but many are preventable. And the only one looking out for your safety is you! Your work or anyone else is not resposible for your safety. You are! I have seen to many accidents that could be preventable by using the proper ppe or using the safety guards in place on the machines you are operating. There are warnings on tools and equipment for a reason as some of us have witnessed.
Lecture over lol.

Many years ago We had a chap in dispatch who managed, somehow, to nail himself to a pallet with a big industrial nailgun straight through the centre of his hand.

Really weird thing is he had done it with 2 NAILS ! you would think the pain of the first one would have stopped him.