My first CAD system was a DOS program called EasyCad. It came on a single floppy disk, was strictly 2D, and a welcome 'upgrade' from paper and drawing instruments. Dimensioning worked but was very crude. Then TurboCAD came out. It was still 2D and, at first I didn't like it, but I persevered when I discovered that associative dimensioning was a step forward over EasyCad. Eventually it was upgraded to 3D and actually worked reasonably well. But editing a drawing or a model was often so messy that, as nealeb said, it was usually best to start over.
A friend had an old copy of SolidWorks which I coveted, but the price put it well beyond my reach.
Then I heard about Fusion 360. I downloaded it and tried the first tutorial. I was baffled. I watched a few YouTube videos from NYC-CNC and Lars Christensen and decided to venture on to proper project. I stumbled a lot but eventually got to the stage of thinking in the F360 manner rather than in the 2.5D of TurboCAD. For quick 'back of envelope' things, I turn to TurboCAD, but for a proper 3D model there is no beating F360. The steep learning curve is certainly worth the effort.

My first Cad program I used was 2d Grafix Cad. I still have an old laptop that I can run it on (windows 95). However, I moved up to Turbo Cad and have used it now for over 15 years. I will admit that the learning curve was tough! Especially back then we did not have U-Tube. However, I keep at it and I use it for all of my home shop projects as well as creating drawings for 3d printing. I do upgrade it every year so I do have the latest options. The 2020 version will have animation capabilities.

“Easy to learn” should be banned from the English language. Nuclear Physics is easy to learn too, for some people. It depends on your background and ability. I find Fusion 360 impossible to understand. Same with Nuclear Physics.

Can anyone explain the difference between Fusion 360 and Inventor?

I recently joined the EAA to get Solidworks. I was able to download the Educational version for 2019-2020. It includes everything that a standard version has including SolidCAM. I much prefer Solidworks over Fusion360 because none of your work is on a cloud somewhere. You can also get HSMWorks, the same CAM that's in Inventor and Fusion for a free download from AutoDesk.
N

scoopydo said:
I much prefer Solidworks over Fusion360 because none of your work is on a cloud somewhere.
Click to expand...

I appreciate that for some people the whole "cloud" thing is a problem - for example, if you are dealing with proprietary information - but if you have used both SW and F360, could you possibly comment how similar/different they are to use? Remarks about SW are usually (apart from cost!) favourable while F360 gets a bad press re usability for a beginner. I accept that when I started using F360 I found that it needed me to approach the whole CAD business differently - it was like thinking at 90deg to normal - but I wonder if it is the same for SW? Perhaps it's because SW users tend to come from a professional background while F360 home users are often self-trained?
D

I used CAD professionally since the early '80's. Many years on the drafting board prior to that. First CAD was Intergraph, Expensive, ran on VAX computer, and was pretty much a glorified 2D drafting system, but quite an advancement on the pencil methods. Then a short time on CADAM, boy was that a mind boggling experience, hated it. The best step forward was Anvil 1000MD, a 2D mechanical design package that was absolutely great! If you had learned drafting on the board, this one was far and above the easiest to use, and did things just how you expected! (It is still available!). After using Anvil 1000 for a few years at three different companies, I had to learn Autocad. 8>( hated it a the start, it was far less intuitive than Anvil, which did things even an expert hired to help us transition from Anvil could not accomplish in Autocad. After two years, still hated Autocad. Next step forward was moving to 3D modeling, with Solid Edge. Grew to love it. Then I moved to another company using Inventor, learned it pretty quickly and grew to like it. After 6 years of Inventor, had to learn SolidWorks. Used that for about 3 years, and have it at home now since retiring, but would still take Inventor over Solidworks in a heartbeat! Inventor does many things well that Solidworks does not. I had a two page list of things I liked in Inventor far better than Solidworks, we had a Solidworks expert come in and help us, he was only able to show us how to do about half my list, some of it took more clicks and picks, but about half my list just cannot be done well in Solidworks. Some of it is pretty ridiculous that Solidworks has not seen the light. However, Inventor has gone to a subscription only mode, very expensive, and it you do not continue the subscription, all your work is pretty useless! When the subscription runs out, that is it! They no longer have any permanent licenses. 8>) My 2017 Solidworks still works great, and should continue to do so.
\
J

When I retired, I think I left the list in my desk. I thought I had it at home, but cannot find it. A lot of it was simple things that are easier/faster/better in Inventor. One that I used daily was projecting (converting) planes and axes to a sketch. Solidworks does not do it. 8>( I wish I had my list, there were a lot of simple things, some more involved. I also used the design functions in Inventor a lot, such as gears, splines, chain drives, bearings, etc.. Solidworks has no equal, requires finding third party add ins.
C

Shopgeezer said:
“Easy to learn” should be banned from the English language. Nuclear Physics is easy to learn too, for some people. It depends on your background and ability. I find Fusion 360 impossible to understand. Same with Nuclear Physics.

Can anyone explain the difference between Fusion 360 and Inventor?
Click to expand...

I think the Onshape interface is cleaner and easier to understand, but the basic principles are the same. The official tutorial material, help, and forum are good.
R

Fusion 360 is working for me but I did lose a lot of hair learning how to use it and even now know there is more to learn. The other software talked about here is either old or costly so my choice is Fusion 360 as I am a hobby engineer and if it was not free I would not have cad/cam software and have been pasting on what I have learnt to others who are now professionals so Fusion does win in the end.
S

I used Arnold Rowntree's tutorials for Fusion 360 - he shows you every step and is easy to follow. Within an hour, I could create parts that I needed to make.

SpringHollow, nice idea to post tutorials. I would never have gotten started in CAD without the tutorials and FreeCAD was another nightmare until I started with tutorials on that. My favorite series of tutorials were from Lars Christensen.

Shopgeezer said:
“Easy to learn” should be banned from the English language. Nuclear Physics is easy to learn too, for some people. It depends on your background and ability. I find Fusion 360 impossible to understand. Same with Nuclear Physics.

Can anyone explain the difference between Fusion 360 and Inventor?
Click to expand...

At what level do you find fusion impossible to understand?
I can create most shapes I want but struggle with making assemblies.
There are many tutorials but often they forget to explain the basics.
T

I modeled a finger brake in fusion. I just wanted it to fit together and didn’t try to model movements. It was quite easy compared to Inventor. It was also a worthwhile exercise as the written instructions and diagrams weren’t always clear.

I'm here to tell you Fusion 360 works. I would have no way to make this part without it. I had a student copy of MasterCam years ago while playing at the local JC, but I ran the machine (a Haas VF3) and didn't do much 3D drawing as I spent all my daytime on a computer at work as an engineer. Got very good at AutoCad but that's not available after retirement, so Fusion seemed like the way to go. I have to feed a Tormach with programs and this is the way for me.

I’ve been using F360 for some time now. At first I designed using the “bottom up” method ( each part designed individually and then brought into an assembly file defining each joint and position as I added them). A very time consuming method.
I have now switched to the “top down method”(each part is designed in situ under a main component) Virtually all joints can be set as “as built”. Sketches or parts of sketches can be used in any component meaning relationships are defined allowing a change to be instigated in all dependant parts by simply changing one sketch, etc.
Here are a couple of screenshots from a steam engine I have recently modelled. 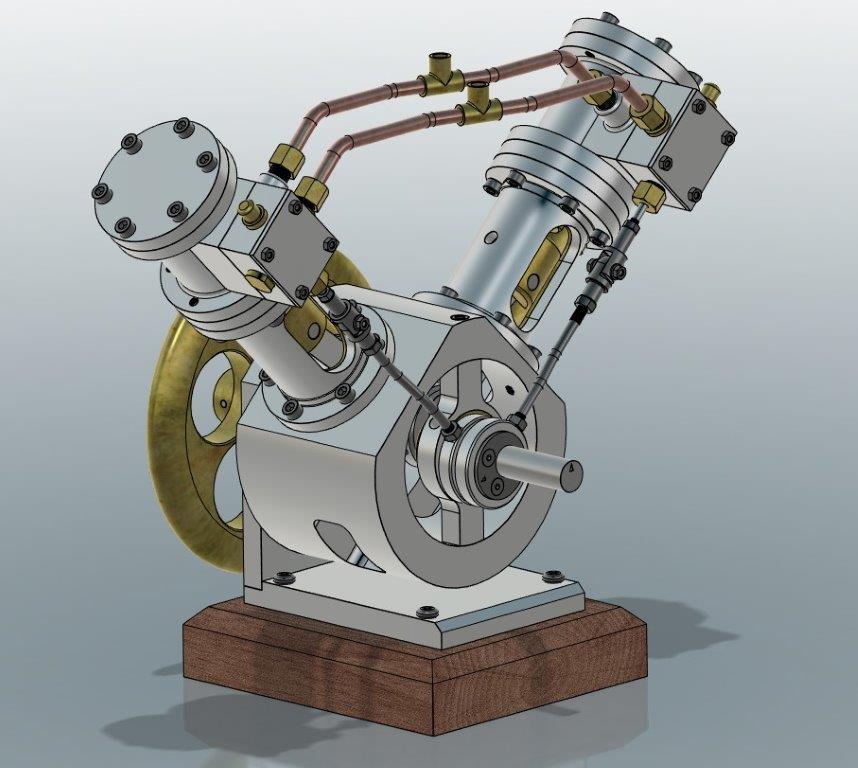 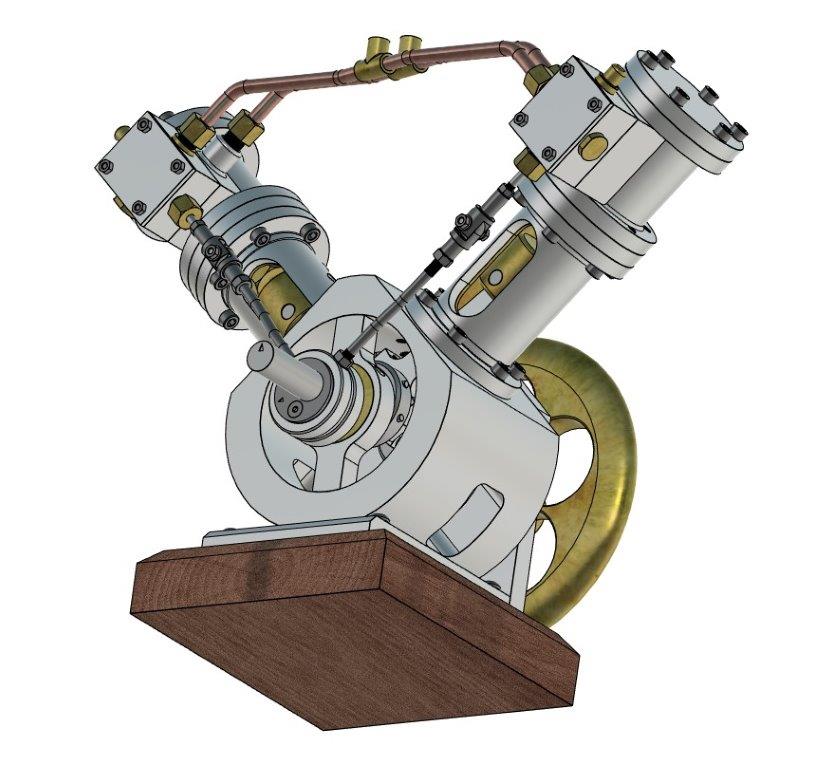 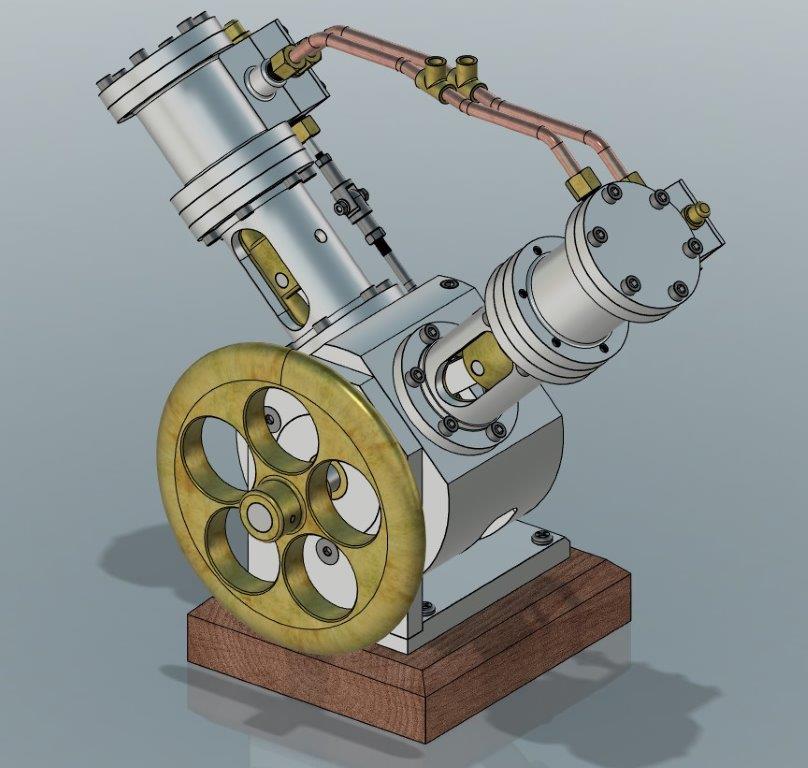 DickF, welcome to the forum! I'm not sure if it is a matter of format for videos - my suspicion is that it has to do with limits on file size (10Mb or so seems to be the limit). Most people upload the video to YouTube or something similar and post the link here.

Thanks for the welcome awake. When I try and upload from my iPhone no videos are available, so not even small ones can be picked. I’ve never uploaded to YouTube, but if that‘s the way I’ll take a look.