Enjoying watching your progress and techniques. I am very familiar with your cleanup mistake - made it more than once!!
L

vederstein said:
I'm glad to see that someone is watching. I was wondering if anybody had interest in this thread or if I was documenting for no purpose whatsoever.

I'm sure there are many of us lurking who are to dumb to comment. I for one am fascinated to learn new techniques and tool usage. Keep it up.

I made biggie mistake on some of my castings. I thought I could keep track of what was cast aluminum and what was cast zinc on the shelf.

Well I found that if you alloy aluminum and zinc together you get complete and utter crap. The material is brittle and cracks easily. It doesn't cut well and the finish is garbage. One of my cylinders and crossheads are of this crapinium. So I guess I need to make some more castings. I also realized my pattern for the cylinder casting was missing a boss. So both of those are garbage. Ugh.

So I went onto some of the other components. There wasn't really any rhyme or reason for the order of these parts, they just need made.

Then I indexed to the centerline then drilled and milled out the crosshead slot. 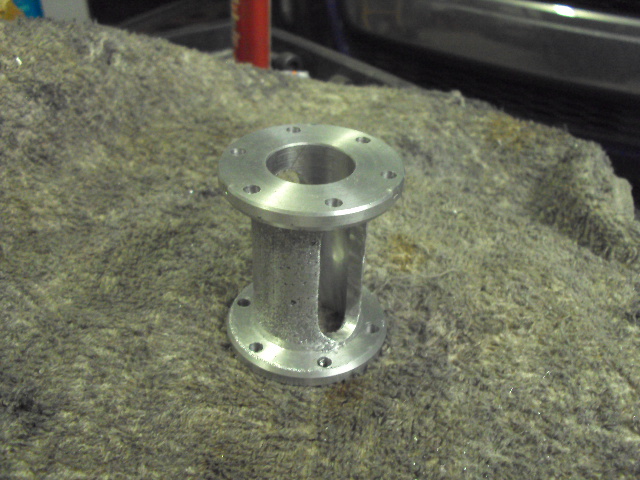 I then made the pistons. To keep things simple I had a piece of 12L14 steel of the correct diameter. So I just used that. The pictures should be self explanatory, this was a fairly simple component(s).

Note that I kept the part in my 5C collet holder throughout this part to keep everything in place. It was off to the mill where I milled the conrod slot and drilled/reamed the pivot joint.

Back to the lathe. After parting off the part I cleaned up the opposite side. TADA: a crosshead piston! 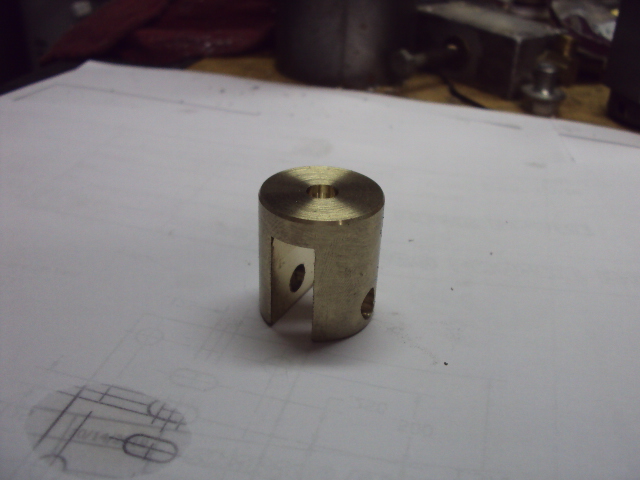 I'll have to wait until the other crosshead frame is made to create the second crosshead piston due to the slip fit requirements.

I created the piston rods but are so simple it's not worth documenting here. (They're simply lengths of 1/4" rod tapped 10-32 at both ends).

I couldn't resist putting a few parts together. I had some interferences with the connecting rod which I resolved. and the bottom end of once cylinder is complete. 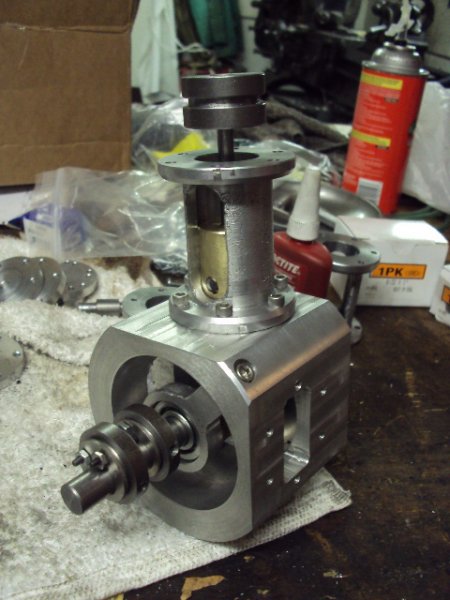 Cool stuff - will I ever get the skill? Too much to learn, too little time!

I'm a hack (a practical one though) compared to many of the people on this forum.

But then it's just a hobby. If you enjoy doing it and it's not screwing up the rest of your life, don't worry about your skill level.

A side note: I document the builds the way I do so people can see how (not) to make a part. Much of the time, I'm doing it for the first time myself, so I have no idea if what I'm doing is "correct" or not. Trial and Error Baby!!!

I've been away for some time. This is not because I haven't been working on the engine, but I've been making duplicate parts.

Anyways, I made one of the steam chests (valve body) today. Because my castings have lots of flash, there was a lot of flipping to get the thing square.

When I have four "square" sides I positioned the part for drilling / milling the mounting holes and steam chest. Being a casting, there isn't a foolproof way to find the center, it's an educated guess with some measuring equipment to back it up. I've had better luck whittling out pockets via multiple plunge cuts with the end mill instead of milling progressive slots. I had some undesirable scalloping. It's doesn't hurt the functionality of the part and it's covered so I'm not too worried. I'll make adjustments on the second one when I get around to making it.

Drilling/Reaming the hole for the valve rod is a bit tricky. First I used a 123 block to position the valve body square. Then I found the "center" of the boss where I drilled/reamed the hole.

Because the casting had lots of flash, I put a 3/16" rod through the part and held it in the lathe. Then I could turn the flash away.

The casting then needed milled to the correct thickness. I kept the 3/16 rod inserted into the casting and used the paper slide technique to find the tangent of the rod radius. Then I could calculate my position relative to the rod center and mill off the extra material.

The last operation was drilling/tapping the steam supply port.

And the final part: 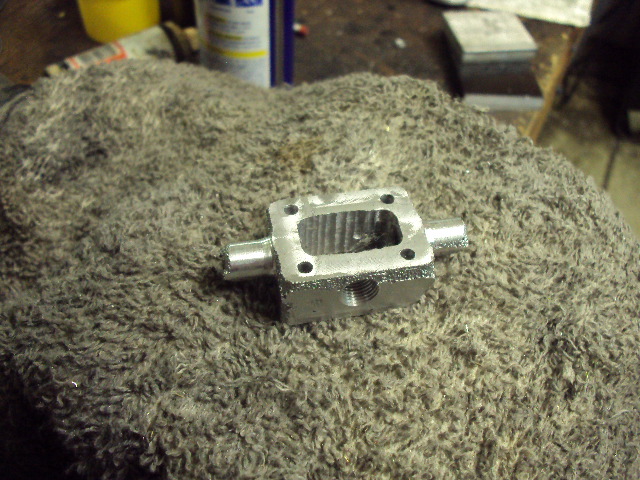 I re-cast the cylinders and crosshead frames out of aluminum instead of crapinium. Then I machined them back to where I last showed them. So consider these steps a continuation of those parts.

The porting on the cylinders are probably the most cringe-worthy part of this engine because a screw up here isn't recoverable. The part is scrap. Gladly as far as I can tell, I didn't screw them up! (I'll find out later when I try to assemble/rotate/run the engine).

After indexing the cylinder port face to center, I drilled out the slots prior to milling because I've broken too many tiny endmills. I've always had better luck with plunge cuts then finishing the perimeter.

Then I drilled & tapped for the steam chest.

I rotated the part 90 degrees and drilled/tapped the exhaust port. I made sure to only go as far as the port face and not over drill the depth.

Then, again flipping the part, I milled out the pilot slots for the pressure porting.

I couldn't figure out a way to fixture the part reliably in the vise with the tooling I have, so I resigned myself to tilting the milling head. I really didn't want to do this because tramming this thing is a PITA!!

Do this four times (two sides & two parts) and I have finished cylinders. 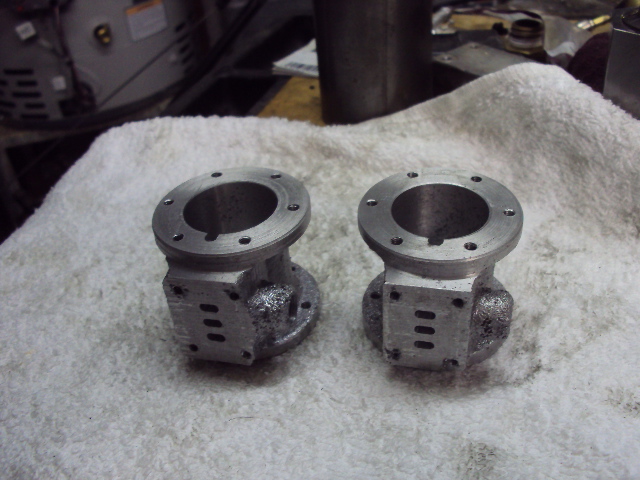 That's is for this session.

It's Christmas! What better day to be out in the garage? (Actually due to my work, I did the family stuff over the weekend, so on Christmas day, it's just the wife and myself.)

Before any work could commence, I needed to tram the mill due to my previous cylinder porting operation:

Today I worked on a some smaller parts. The first was the valve port face. The part was simple and the picture should be self explanatory.

Then I worked on the two D-valves. Before doing the hard stuff, I needed to mill the parts to the final size. After that I milled the valve rod slots. Due to the small endmills, some of my cuts were plunge cuts (think like drilling) then a final pass to clean up the sides. In the past I've broken far too many tiny endmills by being too aggressive.

Next was to flip the part and gingerly cut out the port face. My cut depths were shallow (~.015").

Flipping the part on its side, I could mill the four corner chamfers:

After a little deburring, two D-valves: 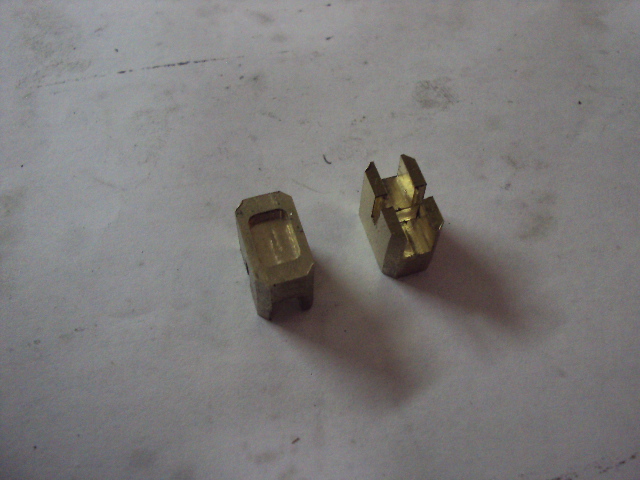 That's it for today.

Coming along nicely! Merry Christmas - I hope the Fat Bearded Gentlemen brought you some new toys for your shop!!
Thanks for sharing.
L

Cymro77 said:
Cool stuff - will I ever get the skill? Too much to learn, too little time!
Click to expand...

You can say that again brother.

Well, I was 3D printing the casting pattern for my flywheel.

Needless to say, something went wrong... 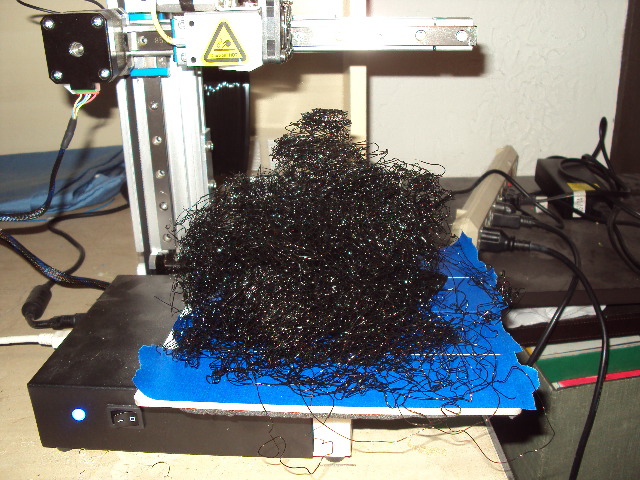 I feel your pain. I've printed my share of those as well and it's always disappointing.

The second try went without any problems. The issue had to do with positioning of the model. I printed the pattern vertical to keep the outside surfaces free(ish) of support material. The software positioned the print crossways to the Y-axis meaning that the print wobbled the taller the print got. Apparently it wobbled so much that it lost position and you see the photo above.

All I did was rotate the print 90 degrees, and the print went just fine.

(It's not a traditional looking flywheel, but then this engine isn't a model of anything. It's just a small steam engine.) 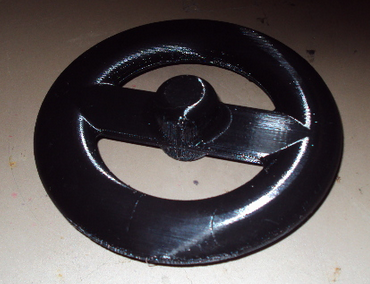 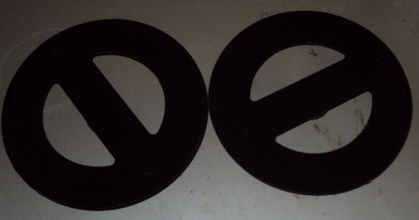 Today I worked on some more valve train parts. Note that every operation shown here was doubled because this is a two cylinder engine.

I turned a piece of 3/8" brass barstock to the round dimensions per the print. Then drilled/tapped the end.

And off to the mill. I put the part into my 5C collet and after indexing the part, drilled/reamed the cross hole.

Turning the part 90 degrees, I cut out the slot. I used my slitting saw for this operation. I hate, Hate, HATE these things. They scare the hell out of me. 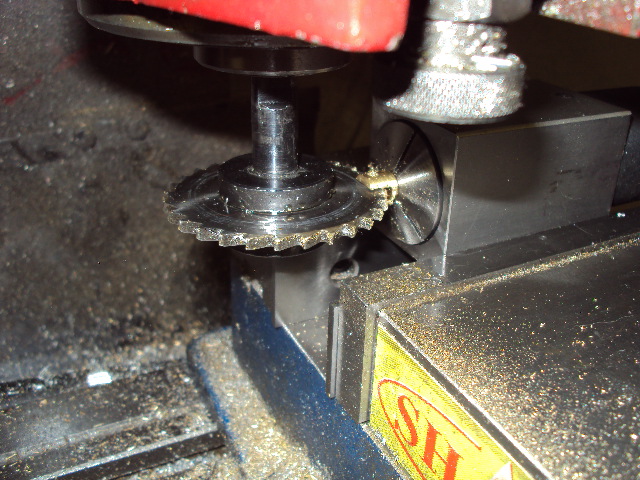 It sucked anyways. I don't really know what I did wrong, but as you can see from the following photo, the tab was totally screwed up. 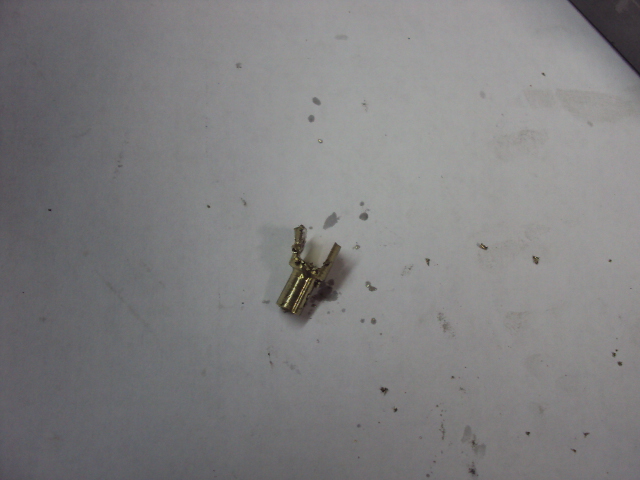 So screw it. I'll start over with another technique (next post)...

...so back to the slitting operation.

This time I went with a known technique: plunge milling whittling out the slot. This technique worked. 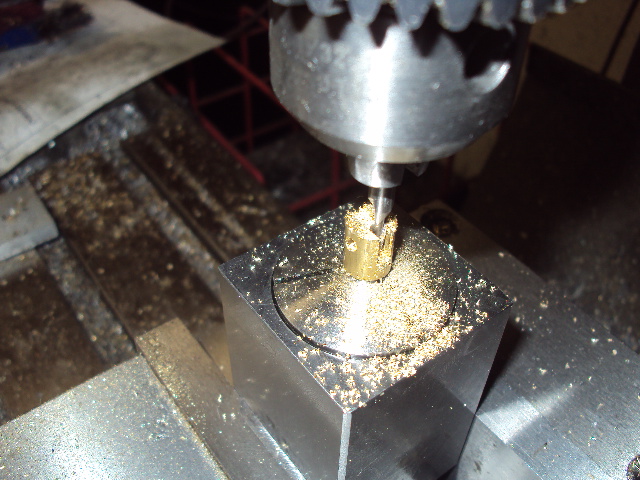 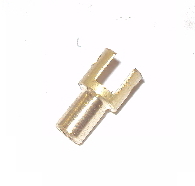 With that part completed, I made the valve rods. These weren't too difficult, just getting the part to the correct length. Then cross drilling per the print and threading the end.

I made the 3/32 diameter pin (no pictures) to move the D-valve and put together one valve assembly. It all fit as intended. (steam leakage is a whole other issue that may or may not exist). 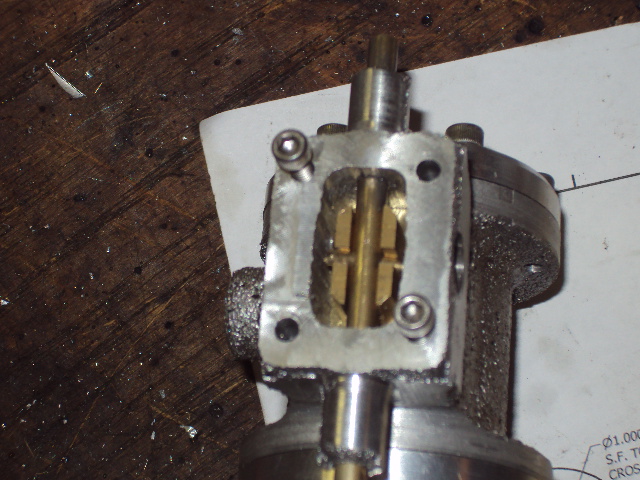 That concludes this session.