Hi everyone & happy New Year,
Been a while since I posted anything. I’m not very good at posting as I don’t think my skills at machining are sufficiently adequate. I do regularly read posts though. I do feel some guilt at having gained SO much knowledge & advice from all of you all while contributing very little to this forum.
I recently came across a post regarding this engine & the website for downloading the plans. Thank you to the John Palmer family for making these plans available for public download.
I have made several models over the last few years, notably the Farm Boy No 475 which I still admire. I am half-way through building casting kit for a steam engine but am not enjoying the build thus far.
For some unknown reason to me, I find hit & miss engines absolutely fascinating. Since the Farm Boy build, not very much has taken my fancy, well, maybe some have, eg, the Jan Ridders twin cylinder flame engine.
So, my challenge now is to build the J & E Junior engine, but the plans & notes are a little confusing to me. I would really like to build something that doesn’t have lots of ‘fiddly’ bits.
I am in awe of you all (especially Brian Rupnow) who seem to be masters of CAD. So, my other challenge is to learn Fusion 360 which I have ‘played’ with for several months now. For a ‘dumbass’ pharmacist, it has been a huge learning curve!
My culminating challenge now is to:
1. Learn the basics of Fusion 360.
2. Convert the John Palmer plans into Fusion 360. I’ll probably need the assistance of many of you to finally achieve this.
3. Build the J & E Hit & Miss engine.
4. Post my build on this forum – to make up for all the information I’ve gained from this forum, especially since this engine does not seem to have a ‘build log’.
That said, attached is a picture of what I’ve done thus far. I do have a few questions though:
1. Am I allowed to post a link to my plans for anyone to access?
2. My plans are in metric, apologies to the ‘imperial’ continents.
3. Is it worthwhile me continuing with this ‘build-log’ on this forum?
This post may take many months due to the fact that I’m still learning Fusion 360, am not as proficient at welding as I should be & do a fair amount of traveling for work.
Attached is a photo of what I’ve done thus-far on Fusion.
Would love to hear your comments, opinion’s & suggestions.
Thanks everyone.
Pete 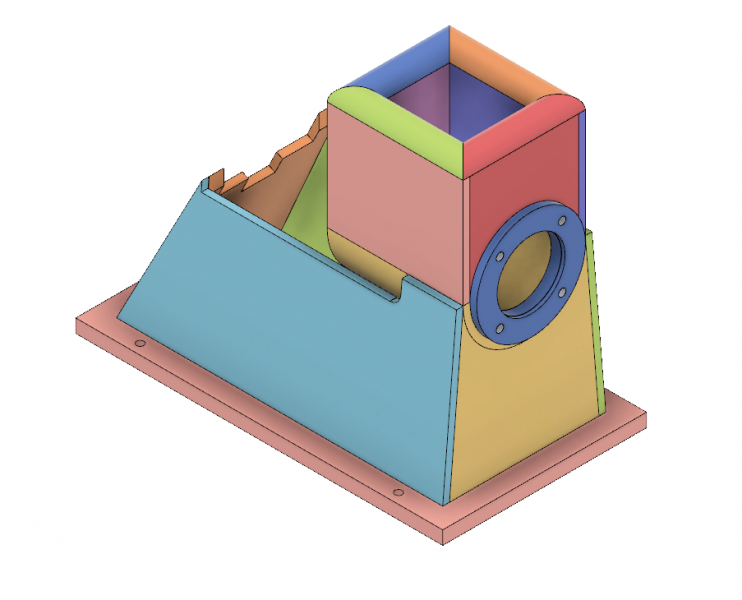 Looking good so far, and definitely worth continuing your build log. I'll be following along for sure (as will many others).

Having a look at the BAEM webpage for the J&E Junior Plans, they say "These plans are provided for your personal use and are not released for commercial reproduction or resale of finished engines or parts". This doesn't say you can't share them, just that you can't charge for them, however, I would contact them through their website and check just to be sure - LINK - as they may want you to insert a similar disclaimer in your plans (or may not want them distributed at all).

As far as the build time goes, I started a build log for my Peewee V4 back in 2014 with an expected completion date of Xmas 2015. At this point I haven't yet completed it, although I am making some small progress at the moment.

Hi, I am considering building the J&M Junior engine and was very interested to see the drawings you have made. It's been a long time, did you get any further and did you in fact build the engine. Any information you could help me with would be gratefully received.
Regards
Terry
I

Baker Fan demonstrations and information for Steam, Stirling or Hit & Miss Engines - Put a load on!