Any body remember were they might have seen simular ideas I can look at.

I did that trick:

The quill DRO is something I use constantly. I have since modified the lower bracket to hold the retaining bar for my tapping head too.

I also have an X-axis DRO:

I use it too, albeit a lot less frequently. I never bothered with the Y-axis, though I have the scale. I just haven't felt the need acutely enough yet, I guess.

The one thought I have is that the scales with a centralized display in a box are a lot nicer and not all that much more moeny. Bernd, I think I would take the bigger caliper as a quill DRO and the smaller as a lathe tailstock DRO (ala Cedge's), and then go looking for one of those inexpensive DRO kits that has a readout box. I think Cedge has one of those too now that I think of it.

The other thing on my mind was the knowledge I will eventually go CNC, which doesn't use the scales. Therefore, I didn't want to invest too much.

Bob
I bought the DRO as a full kit, instead of using caliper scales. I had been told there might be compatibility issues with using caliper scales with the display. I'm pleased to say that the Harbor freight calipers and the inexpensive scales both work just fine and have not been an issue. Even though they take a bit of modification, they've proven to be darned near indestructable. I've cut tines off using a dremel cut off and I've shortened the scales as well as silver soldering on a stub to lengthen one. I used the little depth rod for alignment and all went well. Did I mention they are dirt cheap?

You can buy the DRO display I'm using for a quite reasonable price. The 2 axis display is $149.95 and the 3 axis is $189.95. If you buy the whole kit with scales and mounts it's $349.95, which is what I paid for not knowing that other scales would work so well. The guy I bought from is selling them on ebay at http://stores.ebay.com/SMW-Precision-LLC_Digital-Displays_W0QQcolZ2QQdirZ1QQfsubZ7QQftidZ2QQtZkm and is a heck of a nice guy who has never had a problem with my calling with questions.

I also noticed 800Watt has some dirt cheap prices for these scales, complete with data output ports. I'm about to order a 16 inch or perhaps a 24 inch scale for when I rework the placement of the scales on my lathe. Note that some of the fancy looking stainless calipers he's selling do not have data ports, so they are not a good choice.

One tip....
Order the 3 axis display and some extra data cords with a bit of added length. I color coded the jacks where the cords plug into the display and then ran cords from my mill and my lathe to it. After color coding each cord, it's easy to simply swap the cords in the jacks so that one display works with both machines. Since I only run them one at a time, it's never any problem. I can even use the Z axis display with my tailstock scale if I like.

You'll love having DROs and the display will moer than double the fun and your accuracy will certainly improve once your old eyes can see whats happening again.

I put a DIY DRO on my mini mill. I didn't use digital calipers tho. I bought some scales from 800watt and fab'd up a few mounts. It actually isn't all that expensive, I think I paid less than $110 for all three axes. At a later date I will buy an external display. I can get pictures if you wish.

Prices on these caliper-based DRO's are unreal. Don't know why peeps would want to be without one at those prices. I guess I'm one of those peeps considering my lathe has none and my mill Y-axis is lacking. All due to the expectation of CNC, though.

Thanks for all the replies.

Bob:
I was looking at your pics. Unfortunaley the Grizzly mini-mill dosen't have a quill like the bigger mill-drills do. And I did find those scales some were on the net. I don't plan on going CNC with this mill. Although once I get the bigger shop built I plan on bigger equipment and might just go CNC. Main reason for the DRO's is I keep forgetting how many turns of the dial I made.


Eric:
Won't mind seeing a couple of pics on how you did it.

The main reason for using these cheapies is the price. You can't beat it. All I want them for is so I don't have to count the number of turns I have made on the dial. As a matter of fact I went back and bought another 4", plus a 6", 8" and 12". I found they work a bit better than my old dial one I have.

Again thanks guys for the comments. I post my progress as how I mounted these as I get a-round-to-it. ;D

Have a look at my post DRO ON THE MILL. Its on page 6 in the tools section

Here ya go. If you want close ups, let me know.

We had a thread here last August that showed a few very low cost alternatives
to DRO's.

Their not pretty, but they work! 8)
http://www.homemodelenginemachinist.com/index.php?topic=213.0

Thanks Eric. Looks like that "Y" (?) scale would be kind of tough to read. You'd need to lay you head down in the chips to read it. ;D.

I'm kind of torn on what side to mount the "Z" axis DRO. Mounting it next to the large hand wheel look like it might be a bit tough. The opposite side has lots of room. Might have to stare at those pics some more.

P.S. Is that a belt drive on that mini mill? If so, how do you like it. I'm thinking of changing mine to belt drive.
B

Thanks for posting that thread. I thought I was loosing it. I know I'd seen something some were that stated using those cheap DRO's That's the one that inspired me to go for the cheap HF DRO's.

Me too, I have since modified the lower bracket to hold the retaining bar for my tapping head too.

Well, I'll show you how I did it using the HF digital calipers. (Also, I thought I would include a pic of the column brace I made. (It is absolutely amazing how much this little item improved the mill!!)

Note how I have the Z axis DRO sitting in relation to the spring arm. There is just enough clearance to make it work. I fabricated all of the X and Y axis brackets at work. The Z axis brackets are made from bits I had laying around the shop.

I made little flexible covers for the X and Y readouts using an old rubber floormat to help keep out any oil or chips. Works like a champ. 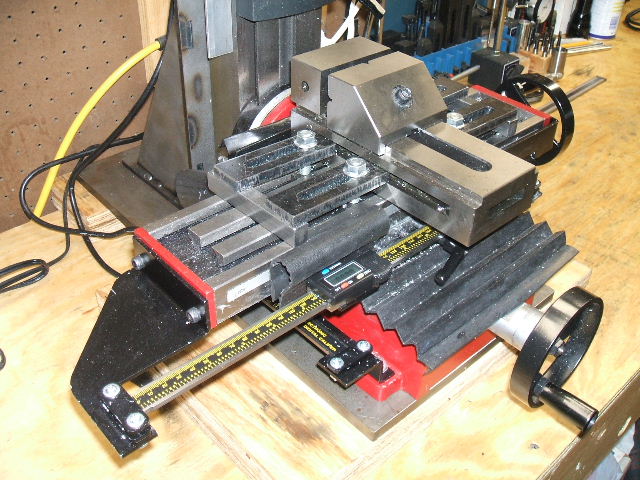 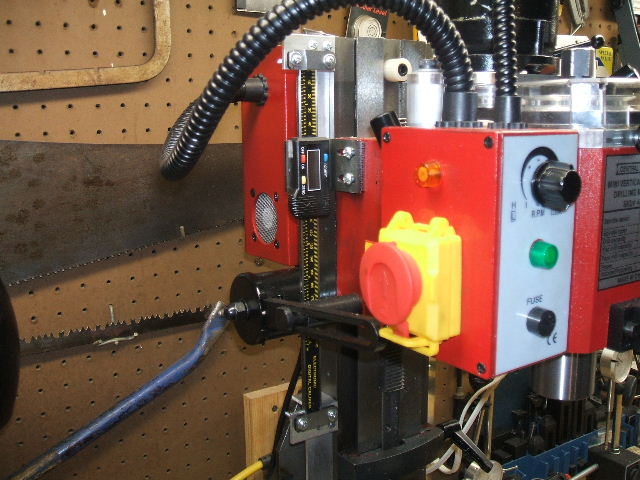 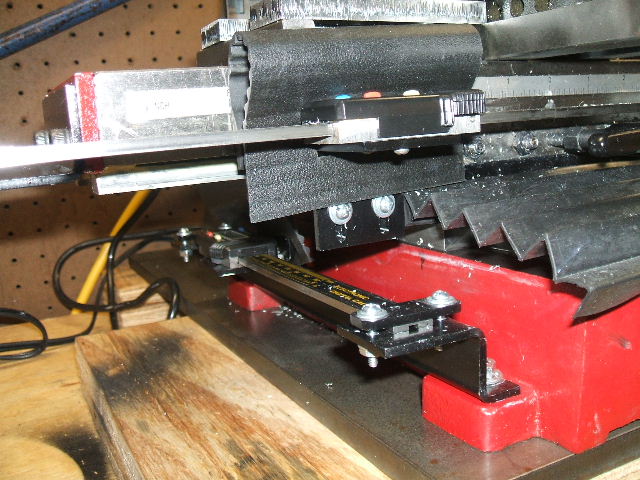 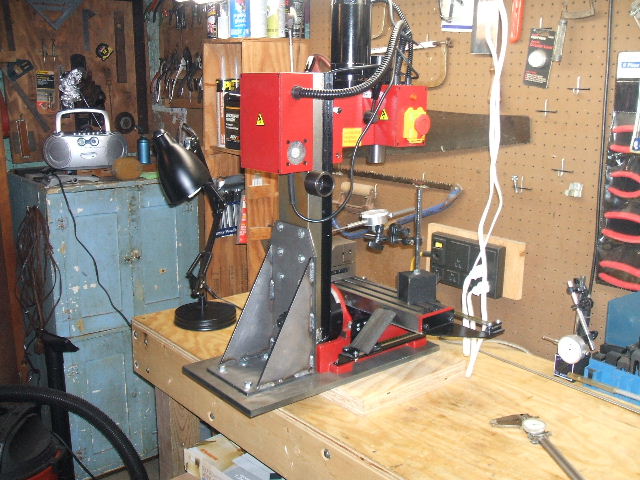 Could you elaborate a bit on the brace size wise. I've got a Grizzly mill. I've seen several versions of adding a brace. Yours I like the best so far. What size sheet metal is that made out of?

What kind of improvements have you noticed?

The base is 1/2 inch P&O plate and the angle bracket is 1/4 inch. Probably weighs 40 lbs. or so! I am lucky in that I was able to cut all of the parts on one of our lasers at work so it is almost perfectly square. Getting it all set up and trammed was not as big a deal as I initially feared. I'll get some dimensions and post them.

Before I made the brace, the column flex in the Y direction was on the order of 0.010 each way. Now, the needle on an indicator hardly moves.

I may even have a drawing around here I could share. I'll root around the ole puter here and see.

You gave me all the info I need. I guess for the benefits of others that have a similar style mill more info would probably be appreciated.

Sorry for coming in late on this thread but if you do a search DRO ON THE MILL you will see how I fitted mine,

I got into this thread a bit late but was wondering if any of you have used these scales and display on a mill drill. I have an older Jet 15 in my basement that is in need of a display and I don't want (and can't afford at the moment) to spend $400-500 on a DRO for it.
O

I fitted some to my Harbor Freight " Big Red" Drill/Mill last week. I bought the cheap digital calipers on sale. I used 8 inch ones. The right - left table movement (can never remember if its x or y ;D)really needs a 12 inch one. I will change it as soon as I can. It has been a great addition to my Drill/Mill. I will try to get some pics this week and post them.

Does your setup include the display monitor? I've heard several people talk about using the scales and adding the display, but I'm just curious what specs I should be looking for if I start mixing and matching various parts. I'd like to stay under $300 if at all possible. I look forward to seeing your pictures.