Build my own milling machine

Hi everyone
I'm new here and even wit website but this is different story
So my intention to build whole milling machine and need some informations about cast iron used I have chosen grey cast 250 grade or sG500-7 and don't know witch one to use for , even for column any help here thanks
D

Have you checked out either the AlloyAvenue, or Home Foundry forums? They're casting forums and love to hear from anybody casting iron.

Keep a good log of your expenses, and when your machine is complete compare with a brand new Chinese import of comparable capabilities.
Is common attitude among HSM to spend $200 to make a tool that can be purchased for $50. Do not ask how do I know.
K

Traian Dumbrava said:
Hi everyone
I'm new here and even wit website but this is different story
So my intention to build whole milling machine and need some informations about cast iron used I have chosen grey cast 250 grade or sG500-7 and don't know witch one to use for , even for column any help here thanks
Click to expand...

I think you are making a mistake building your own mill. There probably are many used mills or even new ones that would cost less than trying to make your own. I have an acquaintance who bought a new South Bend lathe, deep pockets I suppose. Now he wants to save money and build his own mill. I tried to talk him out of it but apparently he knows more than me.
He bought a new 20" Grizzly DP and wants to convert it to a mill.
He could of bought a mill for the money he paid for the DP.
I stopped trying to help him, his money and time. I admire your penchant for casting your own tools but how about casting something like a rotary table or engine blocks etc. This would be more efficient use of your skills.

I can understand you wanting to build anything for yourself, but there comes a time when self build becomes a chore and not a pleasure. I once converted a small drilling machine into a milling head for use on my Myford Super 7. It took a long time and did not really achieve what I was looking for, in the end, I found a Chinese made milling machine on a stand for sale on eBay for £500, a bargain and a lovely machine.
Incidentally, I still use the drilling machine as a drilling machine but with much better accuracy since I replaced the bearing system and reworked the rack feed.

I have a sears craftsman lathe from the 60's 6in beautiful machine. And a Harbor freight lathe from China "junk" I have to be constantly working on it to keep it going! I built my own horizontal mill from two heavy channel iron. The first thing you have to do is make sure it is very square at the base. Like building a house if the floor is not square nothing else will square up. The problem I had most was cutting the quarter inch channel down the length of the spindle. I found at a local store called "barring belts and chain" one inch electric motor shaft collects that worked good as alignment and holders for my cutting wheels. The cross slide I got for 50$ the collects for 11$ a piece. The spindle from scrap yard for .30 per pound. It was two feet long so you can figure the weight from that. On my big mill I got from a friend has attachment for vertical mill. Which I will try to make later. I don't have room in my very small shop for the big mill yet.

It might be a little less impractical to make something that would be difficult to buy, either because it’s rare, expensive, or has never existed before - S_J_H’s boring mill, and Jackary’s ‘Stepperhead’ are great examples:


Here’s my more ordinary home made mill, I’d mentioned it on the other, ‘home made lathe’ thread: 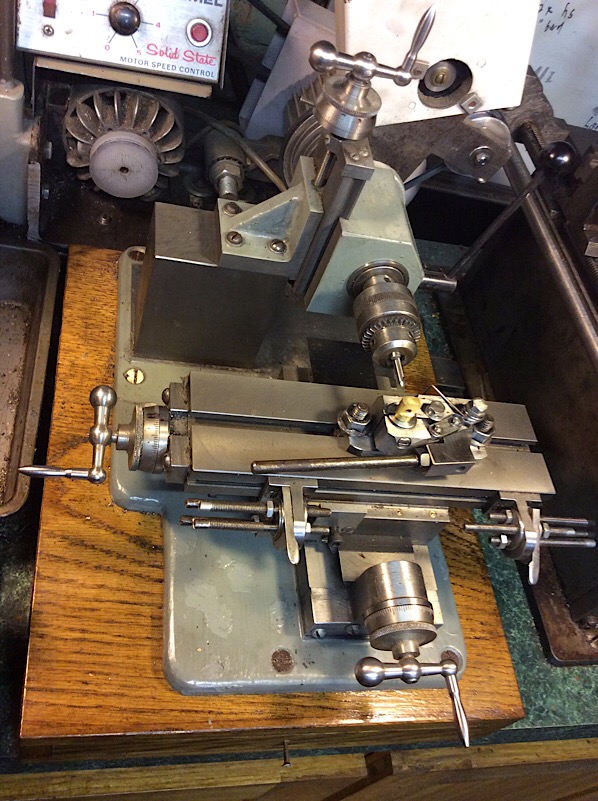 I cheated and reused many parts I already had.

I looked at milling on my Colchester Chipmaster lathe, but buying all the parts,(and still wouldn't be really up to the job) would cost more than I could buy an older/proper milling machine, one in need of restoration. I bought a Pallas HO universal milling machine for £300.
Cheers.

Hi Traian,
If you're building a mill only because you need one, then I agree with others that it would be much quicker and cheaper to buy a used machine.
If you're building a mill because you want to build your own machine, then I'm sure you will get plenty of support from this website.
I have not built my own mill or lathe, but I've made a number of attachments for both and various other tools, including a large set of bending rolls for steel plate and tube.
Please post photos and details of your progress.
J

This is what I built. The only problem I have had was dulling the blade on steel which is funny considering it is a HHS blade. The one thing I didn't know was the support arm was to be solid steel bar. The knee adjustment was an old screw jack inverted and welded in place also making sure it was very square with the support. There's more that can be done to it ; ) but it works for now.

jacobball2000 said:
This is what I built. The only problem I have had was dulling the blade on steel which is funny considering it is a HHS blade. The one thing I didn't know was the support arm was to be solid steel bar. The knee adjustment was an old screw jack inverted and welded in place also making sure it was very square with the support. There's more that can be done to it ; ) but it works for now.
Click to expand...

Seeing the size of your pulleys and the diameter of your cutter, I would guess that you’re dulling your cutters because your speed is way too high.
J

The smallest pulley on the motor is 1"in" the spindle shaft pulley is 3 "in" making the cutting tool rpm to only 583. The motor run's at 1750. So that should be slow enough for the tool.
R

jacobball2000 said:
The smallest pulley on the motor is 1"in" the spindle shaft pulley is 3 "in" making the cutting tool rpm to only 583. The motor run's at 1750. So that should be slow enough for the tool.
Click to expand...

Much too fast,if that cutter is 3", RPM needs to in the 50-100 Rpm. Machinery Hand Book would get a better RPM. Just my intuition.
J

Looks like I need to get that book. The large blade I have is 6 to 8 in. The blade you see in the pic is 5" the I dulled was 6" But I seen slitting blades on here look like it was ran above 1750 rpm.
J

Some of the math I been doing which is 35 (sfm). My speed should be 28 rpm. But that depends on the type of metal being milled. That's a lot of pulley changing. I have a auto-transformer. But I think I going to have to hook up some type of tachometer. What about vertical mill's they run at higher speeds right. I am reading a book on "how to use a milling machine" They talk about chip size- chip per tooth- tooth per inch. And it all ended up to a rpm of 2,400. making me think I need to build a vertical mill to.
Last edited: Apr 3, 2020

For cutting tool steel, speeds drop; for aluminum they increase. If using carbide cutters, the recommended / possible speeds are much higher - but I rarely use carbide, so I don't have those off the top of my head.

As I understand it, rpm is based pretty much entirely on type (HSS or carbide) and diameter of cutter in a certain type of material. Chip load is a different issue; this has to do with how many flutes the cutter has and the speed of travel. Or to say it another way, to change the chip load, you change the speed of travel, not the rpm. Again, as I understand it - I claim no expertise, just some home-shop experience.
C

For whatever its worth, there is a distinct negative about a milling attachment to a lathe. You bang your head against it. After banging my head for three years I sold it to somebody who was really interested in a multipurpose machine. I never heard from him again.
M

You would be surprised what you can find in junk yards. In fact, it can bring tears to your eyes sometimes. If you were in the US, there is what was probably a beautiful Hardinge HLVH lathe on a government website right now. The only problem is that it is in Georgia (I think) and clearly was left out in the rain for the last 5 months. The thing is one giant rust bucket. In fact, the tray is full of water. Ironically, in this case it is not a typical DoD auction either because their "starting bid" is $1500, while most auctions start at $5 (from what I recall). But not all junk yards are like that. And sometimes you can get lucky with just CraigsList

I was casually looking at CraigsList once and saw a nice, but older, CNC bed mill. I contacted the guy and told him up front that I really was interested only in checking out its size in real life, but that I already had a mill. I was not someone who could justify getting rid of my other and buying his. Well, 6 months later the guy called me. He had a proposal. He didn't know the machine (but knew it worked because his father had bought it new) and wanted the space. If I paid for a rigger to move it out and then reposition two large machines, I could have it for free... with tooling. He even let me keep the machine there for almost 4 months while we figured logistics out and we each had vacations. In the end, I got a really nice machine for about $400 (and then spent another 1K doing stuff to it that I felt needed to be resolved... but that was my choice).

Now, those types of deals are rare enough that you can't wait for them, but there definitely are a lot of less sweet, but still very good, ways to purchase very good iron out there. And if you are willing to scrape ways, then that opens up a whole new avenue... And don't discount the cost of gears in a threading box either. They are expensive. On a machine you buy, however, you'll likely have all of that already.... unless you are planning on an electronic leadscrew, etc.

If you are truly interested in making your own machine because you love machinery (a very viable love, I might add... a hobby in its own right) then there are some excellent videos/sites out there which chronicle people's progress. Most of these are CNC bed mills, but not all of them. And some of the designs are really really good. I happen to love machinery and I have often felt that if I had room, I'd like to build a bed mill. But, I only have so many hours (and space).

In summary... It is all really about your motivations. If you *want* to build, then do a bit more searching on the internet. Otherwise, you are probably better off searching the back corners of used machinery dealers. They'll likely have some smaller manual machine that has been sitting there for years. Sure, they'll ask $4000 for it, but they very well may take $500.
You must log in or register to reply here.
Share:
Facebook Twitter Reddit Pinterest Tumblr WhatsApp Email Link