Yet Another Webster Begins

I recreated your alignment, Minh Thanh, using a 1/4" gauge pin for the vertical edge. 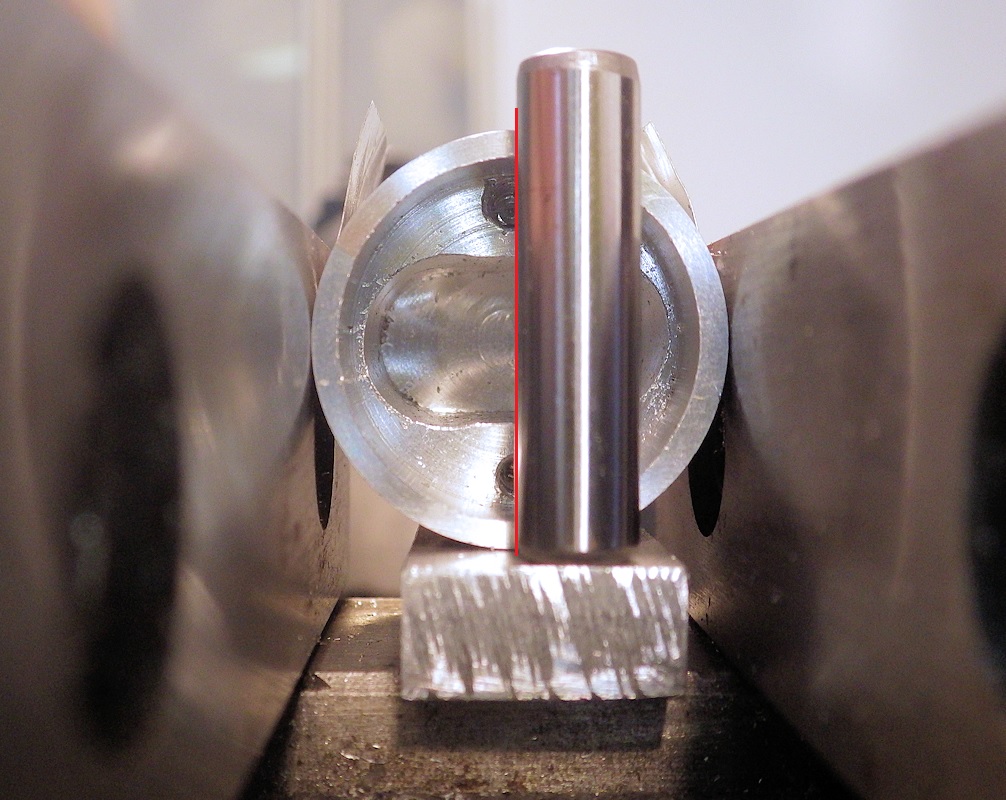 I drew a vertical line in paint. Then I thought I'm not sure if the end of the gauge pin is really 90 degrees to the vertical - gauge pins are accurate for diameter, not squareness. Because this piston isn't really big, none of my squares or 1-2-3 blocks or anything I have that I'm sure is square will fit in there and let me see the two holes. It's probably "close enough". 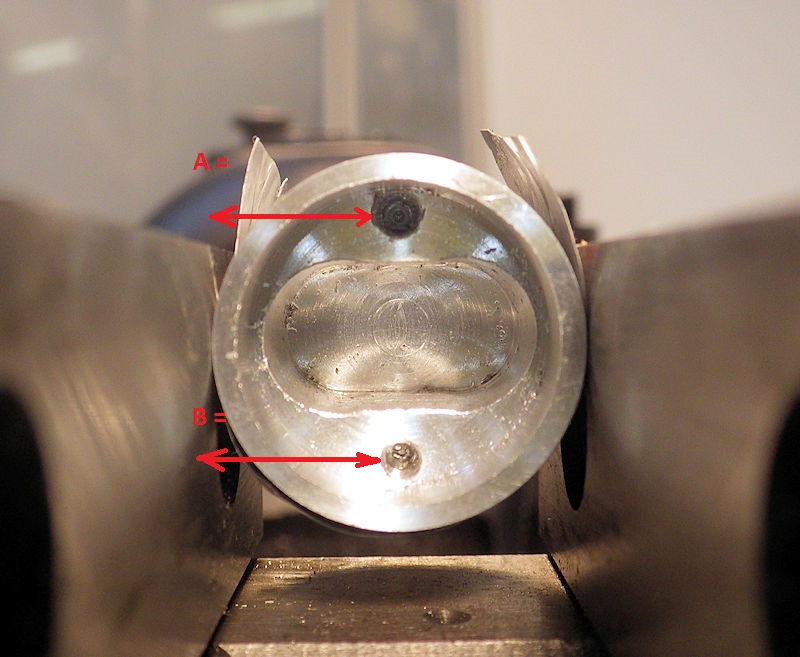 That would be more work than what I did, and I don't think it would be much more accurate, if any. I just don't have anything that I can fit in there.

So I set up this: 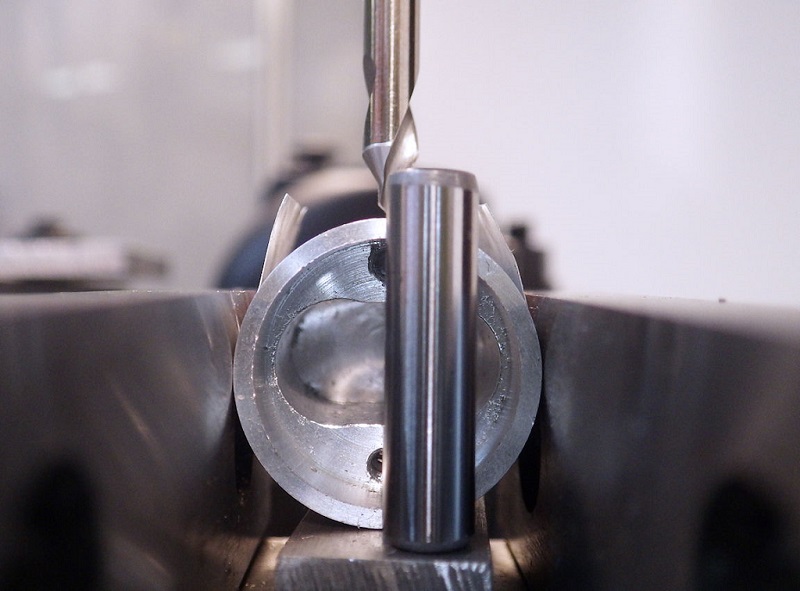 It's the same geometry but including my center drill to spot the hole.

After all the agonizing over the accuracy of setting up the drilling, drilling went quickly. 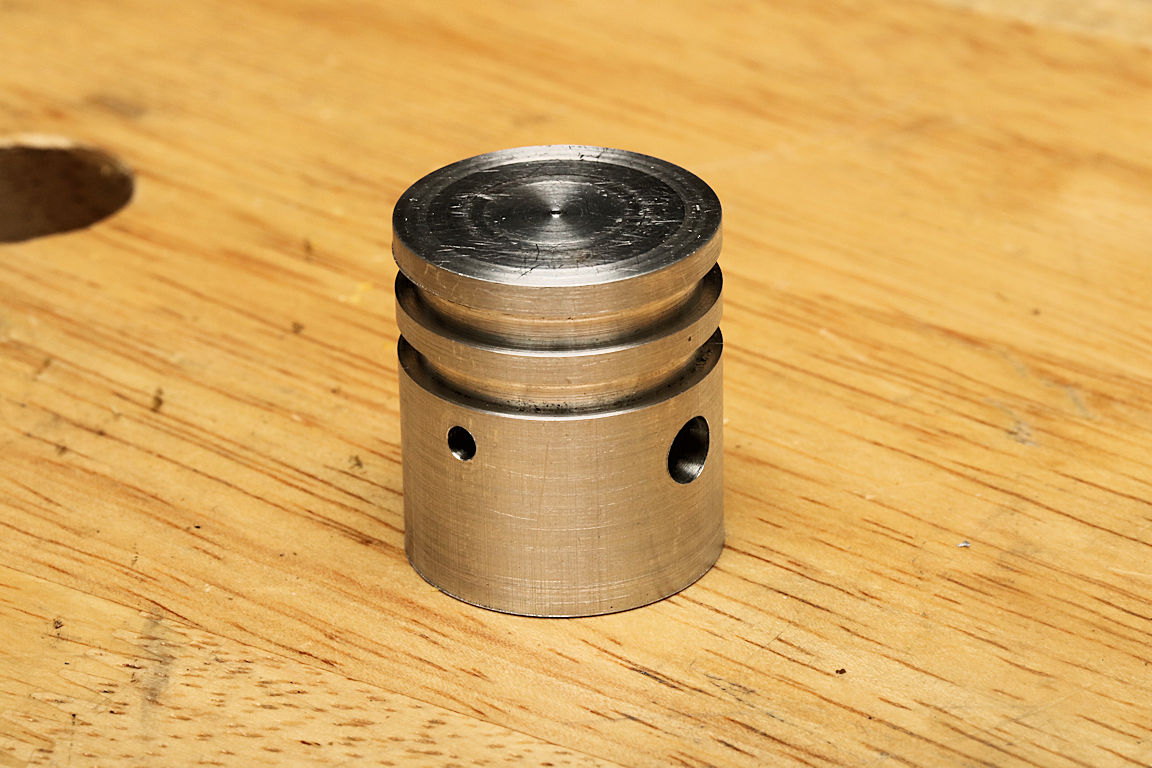 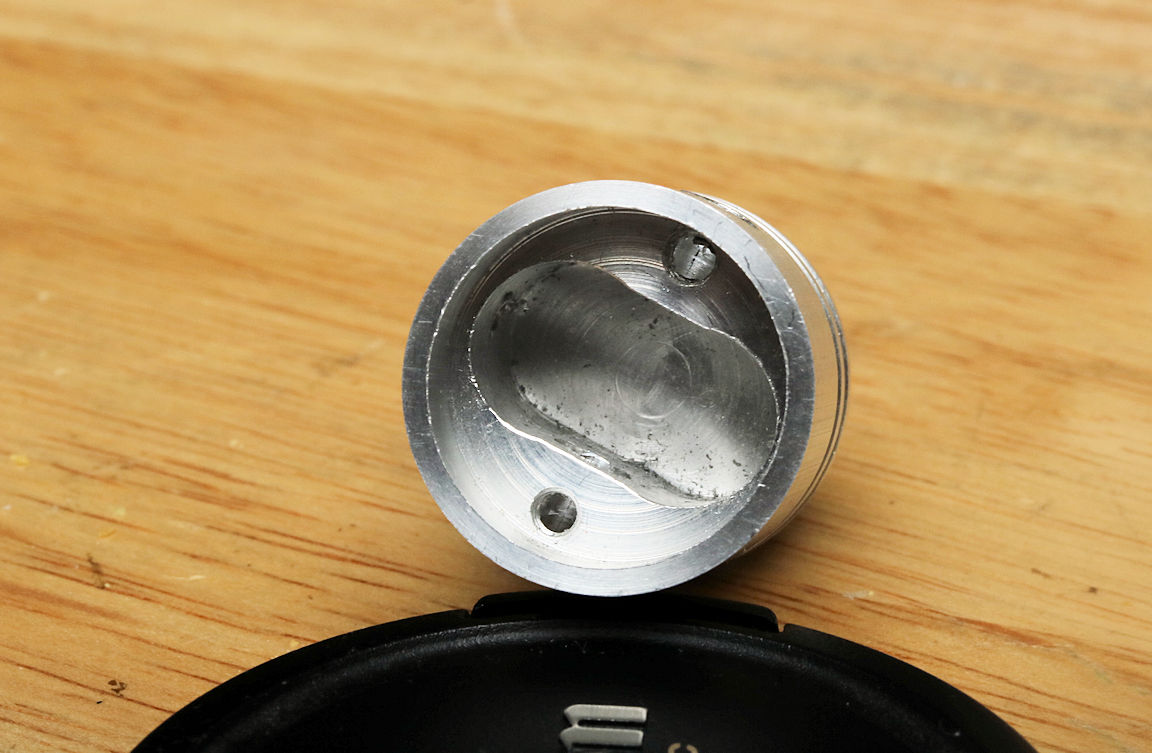 I never cease to be amazed at how dirty things are that I've just spent time cleaning when I look at them under this sort of magnification. I also see some places to de-burr better. The only thing not in this picture is the 3/32 OD, 1/16 ID brass tube. I think I'll make that from a scrap piece of 1/4" brass rod I have.

Now I think it's on to the connecting rod and keep going. There are a few bearings on page 7 that use bearing bronze and I don't have any. It's a good time to see if there's any materials I need to get.

While my lifetime supply of 3/8" "bearing bronze" is on the way, I have a few parts to knock out. The fiddly bits are perfect for my Sherline manual lathe. The oil tube through the piston is 3/32 with a 1/16" hole down its axis. I thought I only had 1/4" brass rod, but found a few inches of 1/8" rod in an out of the way pile, so it was easy to whip out a couple.

Only I made the first one 5/16 instead of 3/16. This almost takes longer to describe than do. 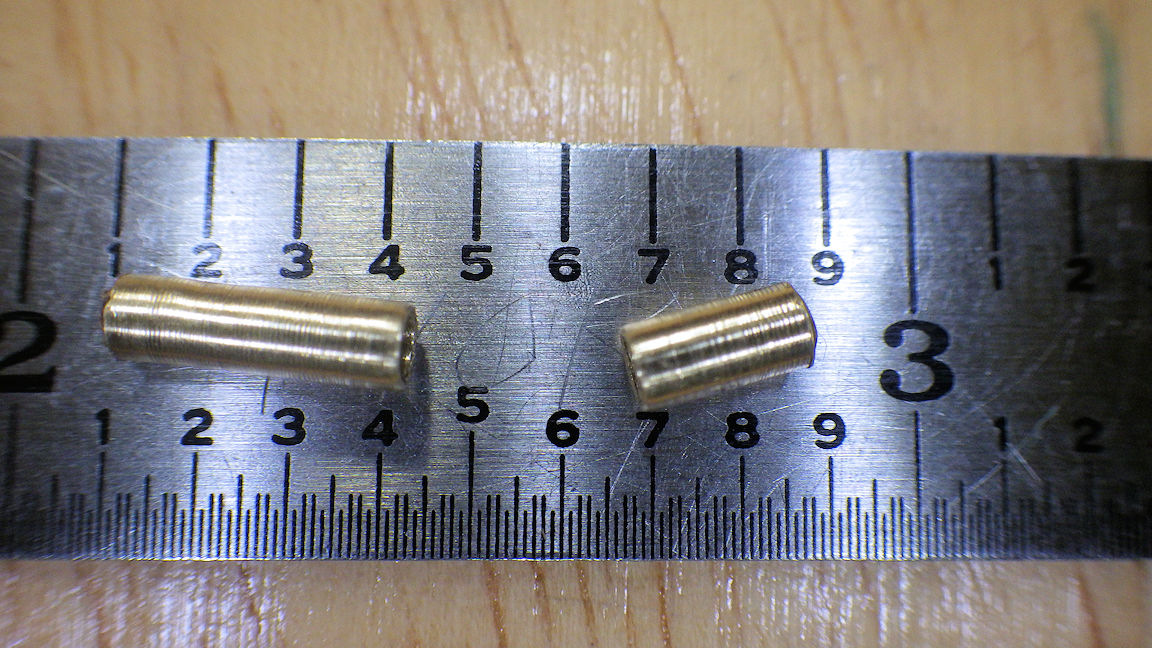 I found some 5/16" plate for the conn rod so I think I can start on that tomorrow. I have the drill rod for the wrist pin and that should only take a little longer than this did.

I cheated on my oil tube on the side of the piston. i used brass tube and swelled it with an awl that fit in which gave a taper to it. pressed it in and filled off the excess. I kept breaking the part when I tried to turn it because it was so small and thin walled

werowance said:
I cheated on my oil tube on the side of the piston. i used brass tube and swelled it with an awl that fit in which gave a taper to it. pressed it in and filled off the excess. I kept breaking the part when I tried to turn it because it was so small and thin walled
Click to expand...

I tried to insert the one that's the right length and it wouldn't go, just holding both parts by hand. The first one fit. I measured the OD again and it said .097, but when it was on the lathe I was pretty sure that it measured OK. So I figured I'll do a third, but I should try your method first.

I also cheated on mine ... and didn't put the tube in. I also didn't put the oiler on the cylinder, because I wound up with the wall just too thin to be able to thread the oiler in. So I just occasionally line things up so the hole in the cylinder aligns with the hole in the piston, and dribble in some oil. So far, so good ... but I've only got maybe 1 hour of total run time, maybe a bit more. Mind you, in terms of # of runs, I'm up to at least 60 - but I rarely run it for more than a minute or two at a time.

I think that's reality, Andy. I can't imagine running it for hours to do anything. It will probably run a few minutes at a time, and then sit on the shelf on a pretty plaque.

I seem to recall someone said they used a two-stroke style premix of some oil mixed in with the fuel. I have a boat with a two-stroke outboard so I have a gallon of that 50:1 oil in the garage.

I've seen a number of folks talk about using an oil-mix to avoid dealing with lubrication. I can see how this would keep the piston lubricated, and the valves ... not so sure how it would lubricate the small end of the rod up inside the piston.

I am running my Webster on straight Coleman fuel, just adding occasional oil to the cylinder as indicated above (and at the same time oiling the gears and rocker arm pivot - and sometimes trying to get just a bit of oil on the valve stems) - everything I've read suggests that using automotive gasoline is not so great. I've also read that some use the Coleman fuel mixed with some WD-40 to provide lubrication.

actually the Webster gets so hot I don't think it would actually run for more than 15 to 20 mins at a time anyway between cool downs. pretty sure I couldn't get an hour continuous out of mine.

I run my Webster on Coleman fuel (naptha gas) with a small percentage of 2 cycle oil. If you want it to run all day, rig up a small fan to blow over the cylinder, driven by an o-ring drive belt. It will run all day.

Clearly I am not adventurous enough, not having run mine for more than a couple of minutes at a time! Partly that reflects the fact that I don't know how hot is too hot - at what point I need to start worrying about seizing up the engine or doing other damage.

I had considered rigging up a fan, and might still do so - there is a spot I might could squeeze it in. But I'm already thinking about engine number 2, which - if it actually works - will be my own design, and it does include a fan.

My bearing bronze is supposed to be here Friday, so looking over the prints, do I recall you using a pre-fab carburetor and not Websters's original? Since in his own notes he says, "Do yourself a favor and skip building this VENTURI and NEEDLE VALVE ASSY", I guess it's getting to be time to look for a carburetor.

Florida is kind of the opposite of the rest of North America. You're getting ready to get out of your garages and get to real life outside (I guess this year it's as much as you location allows). I'm getting ready to stop going outside and stay in the shop more, except for my every other day bike ride, and stuff like grocery shopping.

Bob, I hesitate to offer an opinion, since I only have the one build under my belt - but for what it is worth, I decided to go with Chuck Fellows' carburetor for my Webster build, and I've been very happy with it. I have no basis for comparison, so I don't know what might work better - but honestly, it is hard for me to imagine anything working much better. Compared to other carburetor plans, I would say Chuck's is commensurate with the beginner level of the Webster. The hardest part is drilling the teeny-tiny hole for the jet ... I will confess to making that part 3 times.

Automotive "pump" gas isnt good because it contains alcohol. I run automotive racing fuel. It smells awesome when you burn it and it's half the cost of coleman fuel and no alcohol. I mix some WD-40 with the gas because I run steel liners with cast iron rings and the WD-40 keeps the ring from sticking to the cylinder wall when sitting on the shelf between shows.

awake said:
Bob, I hesitate to offer an opinion, since I only have the one build under my belt - but for what it is worth, I decided to go with Chuck Fellows' carburetor for my Webster build, and I've been very happy with it. I have no basis for comparison, so I don't know what might work better - but honestly, it is hard for me to imagine anything working much better. Compared to other carburetor plans, I would say Chuck's is commensurate with the beginner level of the Webster. The hardest part is drilling the teeny-tiny hole for the jet ... I will confess to making that part 3 times.
Click to expand...

I downloaded the plans for Chuck Fellows' carburetors from the download section; I saw two different carbs, with the major difference being the drawing called 371 had a flange on one end. I'll have to think about that. Compare and contrast to an RC Glow Engine as Webster talks about.
A

I used a Jan Ridders vapour tank/carburetor on my engine. The fuel was from the 2 stroke weed wacker which is 50:1. The only speed control is to change the mixture.

Bob, I found 3 different versions of Chuck's carb floating around on the web - all of them by Chuck himself, as best I could tell - but none of them included a flange! Obviously there are multiple versions out there ...

... including mine - the major difference between the versions that I found was the bore diameter - either .125" or .156 - and the size of the screws that form the jet and the throttle. 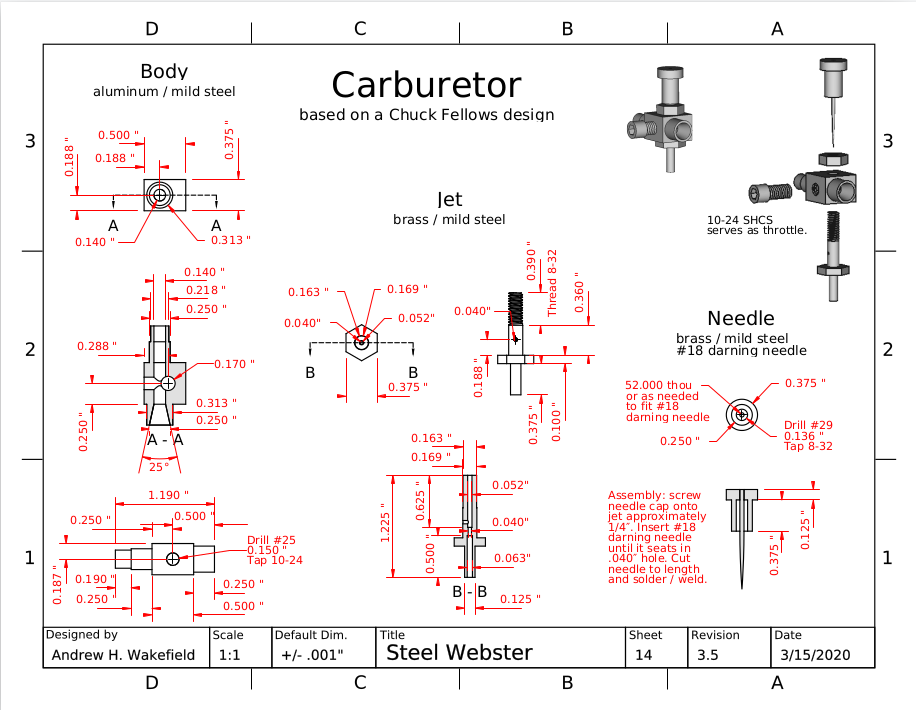 Notes: 1) The plan abve shows 10-24 for the throttle - I thought I would want the faster motion of a coarser thread - but when it came down to it I decided to use 10-32 instead, and as noted in a post above, I've felt like it has all the response I need or want. It seems pretty sensitive to both needle and throttle settings - very little motion gives large results. 2) Not shown in the plans are two springs, one on the needle and one on the throttle, intended to keep these from moving under vibration. The springs do seem to fulfill that intent, but they also lead to the need to allow for a tiny bit of "spring back" when making an adjustment.

Putting the carburetor aside "for now" I'm getting set for the connecting rod. I cut a blank that's a little tapered for this but has enough spare material on all sides to fit. 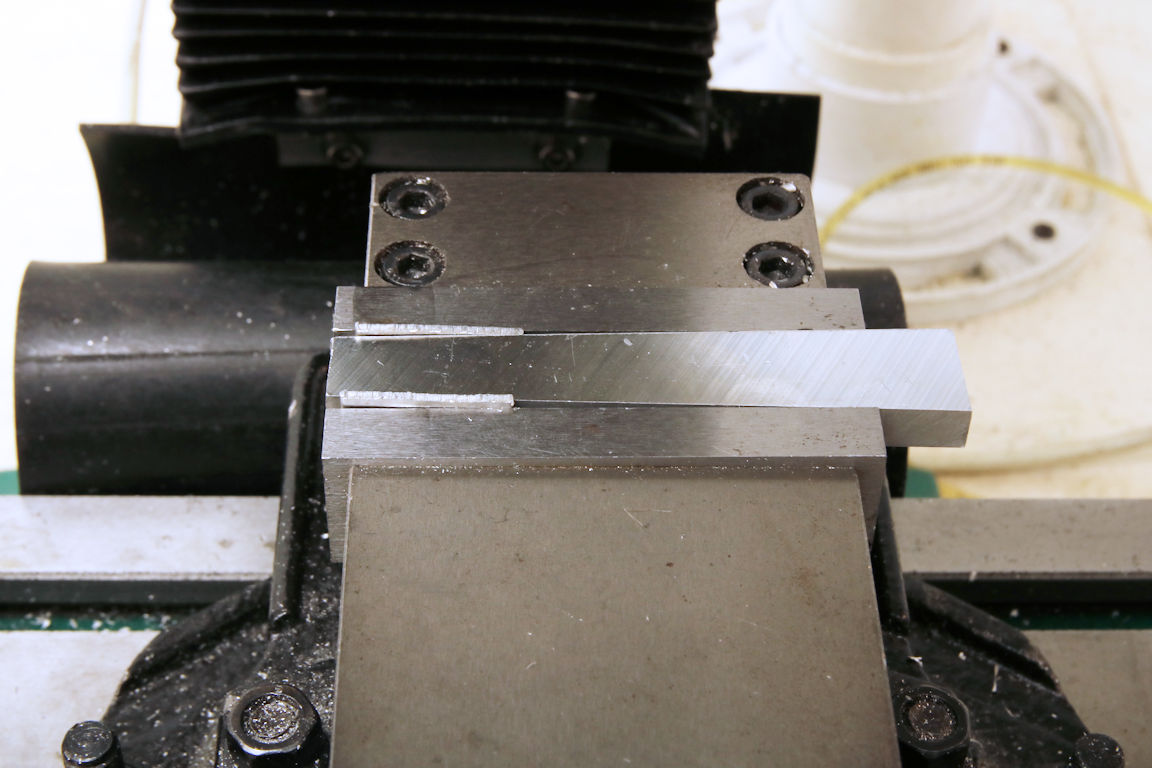 The left side of the vise's back jaw is X=0 and the front of the back jaw is Y=0. When I put a piece in the vise, it's easy to use my CNC as just DROs to go to the point where the two holes get drilled.

My plan is to drill a hole in the center of each bearing but not the final size, just big enough to clear a 10-32 screw. Then I'll use the two screws to mount this onto my shop made tooling plate. Then I'll cut the outlines under CNC.