Yet Another Webster Begins

In the very first post I put up on this build, I talk about the blank I picked up to for the flywheel. To save you the time, the short version is I came across a blank that was half the price of the cast iron or cold rolled steel the plans call for and thought I'd try it. The blank is D2 tool steel, which I'd never even heard of.

I started machining it this week while waiting on the ball bearings and a few other things I've ordered.

While facing it, I found it was very easily heat treated. A .005" cut turned the chips golden or amber colored. A .010" cut turned them cobalt blue and extremely brittle. Just touching them cracks them. So while it was slow going on my 1HP Seig lathe, I faced it and then cut it to diameter. Now it was time to part off the extra length and get the blank down to the proper size to finish.

This is where it got really involved. I started off with a parting tool that was 3/32 wide. I quickly realized that was too wide and didn't seem to be cutting well enough, so I switched to a 1/16 wide tool. That was doing better. Again, I realized that it was bogging down but if held a hacksaw in the cut and let the cutoff blade just trim off the shoulders of that cut, it went pretty quickly. That worked for about the first half inch of the 1-7/8" inch I had to cut.

Then I realized the hacksaw wasn't cutting. The teeth were worn away. I switched the blades and made some progress. Then I noticed the cutoff tool was losing its shape; instead of the Tee shaped cutting edge, it was wearing to a point. I turned it end for end and kept going.

Let me cut out more details, but say it probably took a good six hours of fighting to cut off the extra half inch thickness. Plus an hour running up to the two local hardware chains (True Value and Home Depot) looking for carbide tipped hacksaw blades. The eventual solution was a carbide tipped blade for my reciprocating saw. 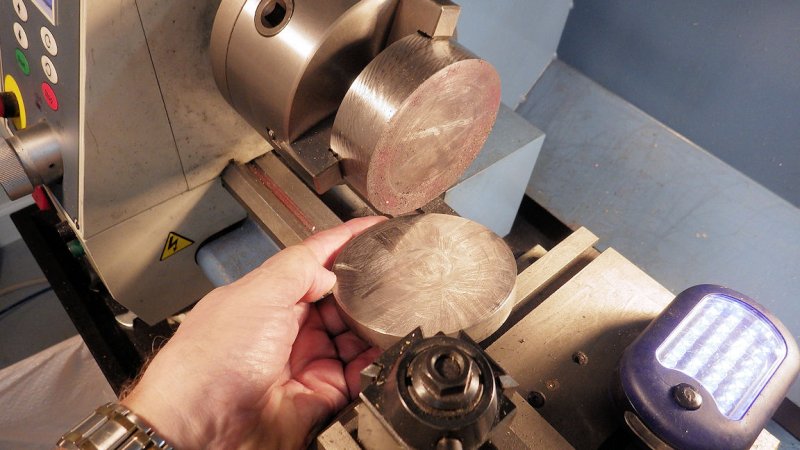 It's interesting material to work on. I suspect that forming the flywheel is going to continue to be an adventure. I probably would have been better off paying twice as much for a piece of cast iron. I'm still thinking of doing that.

Bob--1018 cold rolled steel, brass$$$, bronze$$$ or cast iron will all work well for flywheels. By the time you get the sides of that piece hogged out you will have cost as much in cutting tools as you would have spent for a more machineable steel.

I often use this flywheel on my engines .

Brian Rupnow said:
Bob--1018 cold rolled steel, brass$$$, bronze$$$ or cast iron will all work well for flywheels. By the time you get the sides of that piece hogged out you will have cost as much in cutting tools as you would have spent for a more machineable steel.
Click to expand...

I was thinking it behaves like some stainless I cut once (on my Sherline). It cold works while you're cutting it. I looked it up and it does contain chromium like stainless, but 12% and most stainless I've looked at is higher chromium.

I think if I add in the cost of the cutoff tool I broke off and the saw blades I bought, I've already spent more than what I saved buying this disk.

Hi, Minh Thanh. Thanks! Are those scrap pieces you had or found?

You know, Webster said his flywheel was made from a bar bell weight he bought at Walmart. That might be the cheapest way.

I think it's much cheaper than the price of a bar bell weight .

I'll have to look for that around town.

Bob--What is happening with this build? You haven't posted for a while.---Brian

Thanks for asking. I haven't spent a few hours in the shop in 10 days.

Last Thursday, we got hit by lightning. Either the house, my backyard oak tree or something very close, and I've been finding and fixing broken or blown out things since then. I still haven't gotten our tankless water heater running properly, but it has an emergency backup mode that gets us hot enough water to shower. It took out my air conditioner's thermostat, my internet cable modem, my WiFi router, and really just a lot of stuff scattered around the house. The air conditioner isn't quite "life or death" but in August, it's pretty close to that level, and we called the repair guys first. If anyone has been through this, you know the pattern of damage is that there is no pattern, it appears to jump all over, blowing some things and not touching others.

The last thing I did was decide to put the tool steel flywheel aside and bought a disk of 1018. I turned it to size and then stared facing it down to be a flywheel. I made one facing cut so far, .025 out of the .125 I need to take off. I was going to post an update and then the lightning happened, so let me put this here. 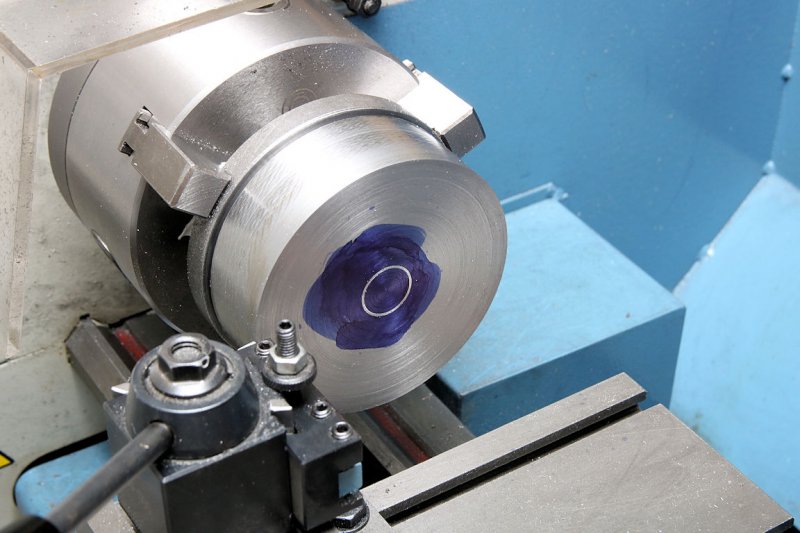 I'm hoping to get caught up enough that I can spend more time in the shop. So far, it has only cost about $750 out of pocket - which isn't even my homeowner's insurance deductible.

I had one of those old gigantic satellite dishes when I lived in Hillsdale. It got struck by lightning, which took out everything from the satellite dish to the television. It was covered by insurance, but when the lightning struck we were all in the TV room watching something and it damn near scared us all to death.

Strange I finally get around to posting the flywheel almost exactly a month to the day since the last post.

I have one more operation to do on the lathe, to bore it on axis for the 0.500" hole. The print says to bore 0.188 deep but my gear's hub is taller than that, so I need to understand how this goes together. That is, should I bore it to the depth of my gear or make it like the print? If I do the first, the gear is closer to the flywheel, and vice versa. 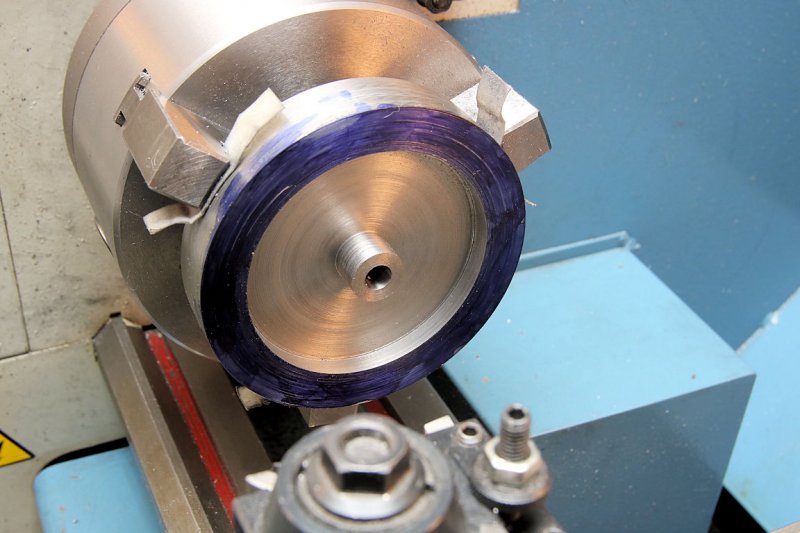 I still spend a lot of time working on recovering from the lightning strike. Hurricane Dorian came close and several days were taken up by the storm. Putting up and then removing the shutters and so on. Thankfully, it passed well offshore after destroying the Bahamas. We got just over 1" of rain and winds to something like 56, which adds up to nothing.

If you look at sheet #5 of 21 and #9 of 21 on the downloaded internet plans, you will see a picture and a detail of the flywheel and the gear hub which fits into the counterbore in the end of the flywheel hub. If you made the flywheel as per the detail on sheet #5 of 21, the hub should extend 3/16" beyond the side of the flywheel and be .625" diameter. You are being asked to put a hole in the end of the hub 1/2" diameter x .188" deep. This counterbored hole will receive the hub of the gear. If you already have the gear, then try and bore the 1/2" diameter hole about 0.0005" undersize so the gear hub will be a press fit into the hole. If you aren't comfortable working to that small a tolerance, then make the hole a true 0.500" diameter and use Loctite when you attach the gear.

My flywheel is within "a couple" of thousandths of the those numbers - .625 diameter hub that's 0.188 beyond the rim of the flywheel on both sides. It's currently just through-reamed to 0.313 (5/16). The half inch bore is the last operation before I move it to my rotary table.

What was confusing me was my gears. I ordered the parts on the drawing from Stock Drive Products. I've had them for months. I had always thought we used the gears as bought, but when I compared them to the sheet 9 drawings, they didn't match. I thought I pushed the hub of that small, 24 tooth gear into the 0.500 by 0.188 hole I bore, and noticed it was too long. It's not just too long, it's too big in diameter. That hub on my gear is 0.655, larger than the .625 flywheel hub I thought it pressed into. Look at this clip from sheet 9. 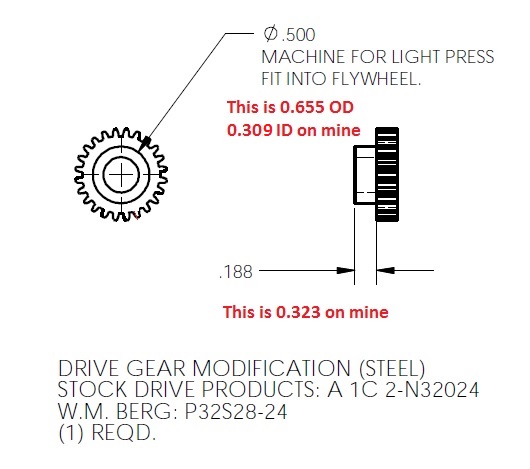 Tonight, I went back to SDP and found that the part numbers I ordered match the drawing. I downloaded the .stp files, measured the drawing and that matches my parts. Since this drawing page says "machine for light press into flywheel," it must mean I machine the gear to these dimensions. The other gear gets machined as well.

Use an appropriate size shaft, Attach the gear to it with a grub screw (set screw). Set it up in your lathe and turn the hub to the correct diameter and length. (Make sure the grub screw is short enough that it doesn't get hit by the cutting tool.)

Brian Rupnow said:
Use an appropriate size shaft, Attach the gear to it with a grub screw (set screw). Set it up in your lathe and turn the hub to the correct diameter and length. (Make sure the grub screw is short enough that it doesn't get hit by the cutting tool.)
Click to expand...

Roger that. I should be able to handle that. I have a handful of extra set screws.

"First things first" is I'm going to finish that bore and finish the flywheel.

That's another one of those tasks that takes about 5 times longer to set up than to do.

Should be able to get 'er done tomorrow. The parts for my next lightning fix won't be in for a few days.

Minus Dykem and plus a few holes. 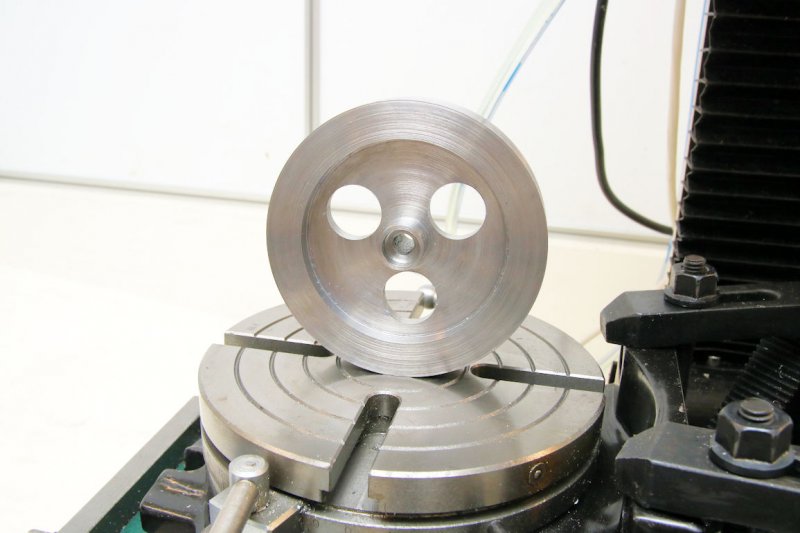