Yesterday I had a small aluminium piece about 1" in diameter, like a small cylinder head, and I needed to clean up and lightly polish the end after parting. The whole part was only about 3/4" in length so it was barely sticking out of the chuck at all.

I successfully took a light facing cut and proceeded to begin sanding it with some wet and dry at about 600 RPM (the speed the lathe was set to for the facing operation). I was cautious of the chuck jaws and tried to make sure I was using only light pressure and staying to the bottom of the piece.

It turns out I wasn't cautious enough and I'm guessing I strayed above the centreline of the part, which generates different forces on the wet and dry and requires different counterforces from the operator. I didn't have time to realise my mistake before the part grabbed the paper and threw my pointer finger into the 4 jaw chuck. The end of my finger jammed nicely between two of the jaws and in 1/20th of a second had twisted 180 degrees around the chuck, taking my hand/wrist to their maximum twist angle as well, then luckily ejected it into my chest, still attached to rest of me, although a little sore from it's adventure.

The ending was pure luck and could just as easily have ended with me only being able to count to nine. I know it was my fault, and I know exactly what I did wrong (nearly everything in this case) but I thought I'd write it up as a warning for others to listen closely to that little voice in your head that says "Don't do it, it's dangerous, you're being stupid". I got away with it this time but it scared the heck out of me...

I have a collection of "chicken sticks" I have a chicken stick for pushing wood through the table saw and I have chicken sticks with double back tape that hold the sandpaper when sanding on the lathe.

Glade to hear you didn't lose any meat.

Oh my ... glad you came out (mostly) all right in the end and thank you for reminding all of us of consequences when we don't listen to the voice in our head. That voice is amazingly aware of what we're up to and very could at predicting the outcome ... if we'd only listen AND do something about it.

... and here I'm the guy that didn't react quickly enough to my own inside voice. Found myself doing "the count" on an OR table a couple days before Christmas; surgery to screw-nail a broken wrist together. (slip and fall on some ice)

I wish you a speedy recovery without issue from the adventure.
Charlie

Cogsy--I'm glad you can still count to 10. I had a similar incident earlier this week while polishing the intake runners for my new engine.-Didn't hurt me, but sure as Heck woke me up!!!---Brian
Last edited: Jan 19, 2016
C

Glad you escaped without serious injury.
I recal watching the film The Machinist put the willies up me. The potential for serious accidents is always there and theres no guarantee against human error , best have a few emergency stop switches scattered around just in case.

Close call with a skill saw, laps in judgement 9 stitches. Glad to hear your ok! 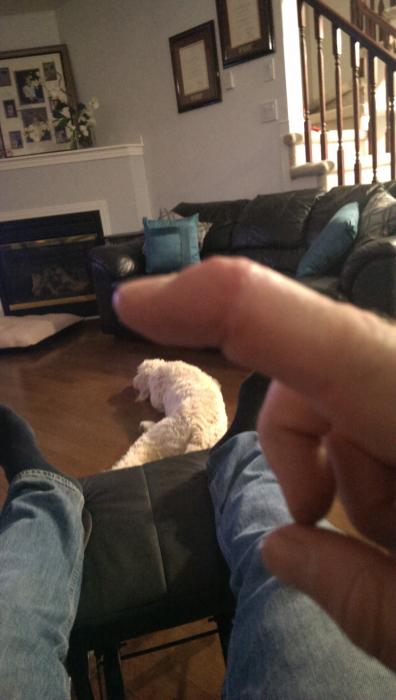 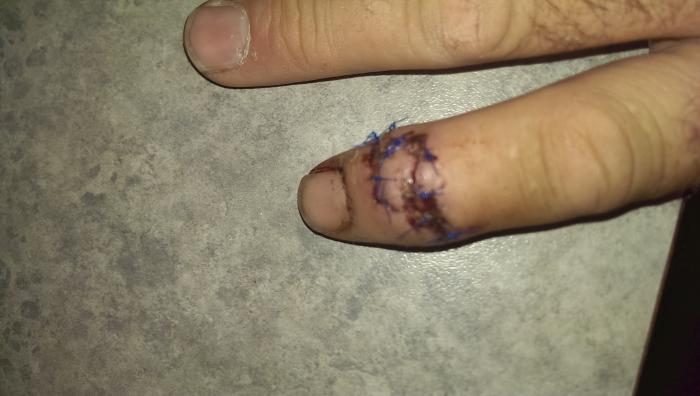 It's not just machine tools. Three years ago this month, I slammed the workshop door on my right-hand middle finger. The door weighs 500lbs. The finger nail will never grow right again...
B

After fifteen years. I cut tendon in my left index finger.

Lol, we have matching fingers, pretty sure the tendon was cut on mine although the doctor said it wasn't. Now when I point at something I get made fun of lol
B

Plastic surgery and rehab. Rehab was worse than the cut. My finger serves as a goo barometer now.
V

I was always taught never to put your finger anywhere you wouldn't put your todger!

Here’s one. I have been a machinist for 40 years. And this is a first. I dropped my vernier and as I have always done before put my foot out so it would not hit the floor. Well it stabbed me. I have never seen this much blood. So 5 hrs in the emergency room and 2 stitches later. And I am back in the shop. Good old electrical tape. 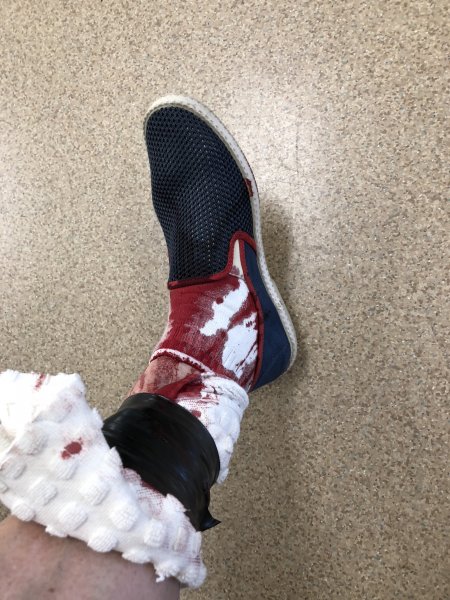 I can sympathise with you as I 'catch' stuff with my feet automatically as well. The worst I have done was when I was working as a furniture removalist and something dropped out of a heavy box I was lifting to put on top of the furniture stack in the truck. I put my foot out and caught the unseen escaping object right at floor level after an 8+ foot fall - a 16lb bowling ball (and I was wearing sneakers). After that day I always wore steel caps to work, once I could return to work that is...

Yes, and my story. I was using a fly cutter to surface an item. I shut off the mill and before it stopped, I reached for the item and didn’t see the cutting edge still moving. Went too close and got my right index finger whacked. It was the first time in my life where I thought, “Do I still have a finger?”. I do. From that moment on I learned, when ever I turn off a machine, I wait till it stops moving!
M

I have a collection of "chicken sticks" I have a chicken stick for pushing wood through the table saw and I have chicken sticks with double back tape that hold the sandpaper when sanding on the lathe.

Glade to hear you didn't lose any meat.

A hint on the "chicken sticks", drill holes in them so they will break at predetermined places, saving you and your meathooks in the process!

what I do with small part's like this is I drill a very shallow hole on a piece of wood the diameter of the part & drop the part in the shallow hole ,the sides of the hole will keep the part from moving around while I clean up the part
O

Cogsy said:
I can sympathise with you as I 'catch' stuff with my feet automatically as well. The worst I have done was when I was working as a furniture removalist and something dropped out of a heavy box I was lifting to put on top of the furniture stack in the truck. I put my foot out and caught the unseen escaping object right at floor level after an 8+ foot fall - a 16lb bowling ball (and I was wearing sneakers). After that day I always wore steel caps to work, once I could return to work that is...
Click to expand...

I well remember, in my secondary school days (some 60-odd years ago) our science teacher turning up one day with his wrist heavily bandaged. The story was that he had been helping his wife by washing up ster an evening meal. He was putting a carving knife in the cutlery drainer when it fell out and he instantly reacted to catch it - resulting in a major cut to his wrist. His moral to the story - "Don't volunteer to do the washing up". I reckon everyone in that class remembered the incident for many years.
J

'do I still have a finger' I remember one of those moments.. I had a puller exerting around 20t of force trying to remove a press fitted plate from a big centrifuge. When it didn't move Inhad the bright idea of sticking my fingers between a part which wasn't going tobmove and the part which should've moved. At that moment the plate flew forward, I screamed and couldn't feel any of my fingers anymore. I was lucky, the part just about cleared my hand and my fingers were just number. Struggled to ride the bike home though, it was my clutch hand. A couple mm less room and I would've Los the lot.
T

I agree that you were very lucky!

I've never forgotten my HS freshman machine shop instructor's safety rules: no long sleeves, no loose clothing, i.e. neckties, no jewelry or watches, and never put any body parts you don't want to risk losing anywhere near a rotating spindle - and that was more than 50 years ago, before we had all the safety interlocks, chuck guards, etc.

I sympathize with you people. 40 years ago I dropped a marine engine exhaust valve on my right hand index finger. I was a fourth class marine engineer grinding in an exhaust valve foe our Sulzer main engine. While applying grinding compound to the valve it slipped off the board I was using to hold it open. Weighing over 50 pounds it came down hard on the finger. It has a permanent twist to it ever since. I can't bend it at the joint closest to the nail (first joint?). Have gotten used to it now.
You must log in or register to reply here.
Share:
Facebook Twitter Reddit Pinterest Tumblr WhatsApp Email Link