Well, that wasn't too horribly painful. New tank of argon for the tig welder, $60, New tank of acetylene--$50, New hoses and fittings for oxy-acetylene rig $45, new acetylene regulator--$125, Hazardous material charge $10 and $35 tax. Grand total of $306.59. I'm back in business again, and I did get the silver solder to flow on that joint I was working on yesterday. Some of that material was 3/16" thick, so it took a lot of heat to get things to flow.

And---TA-DA---We have a throttle return spring and bracket added.

i like it. the knurled tip that you are pulling to "give it more gas" is that an adjuster screw to for lack of better words adjust the idle speed? or is it just knurled to give you something to grab hold of to pull it?

It is just knurled to look pretty and give me something to pull on. There are adjustments for fast or slow idle on the carburetors.

Message here for Steve Hucks--Look at my spark-plug boots. Both sparkplugs are 1/4" thread. The boot on the left works fine. The boot on the right is shorting out right thru the boot material to the nearest cooling fin. It's like a miniature lightning storm when the engine is running. Do you sell spark-plug leads and boots like the one on the left?---Brian 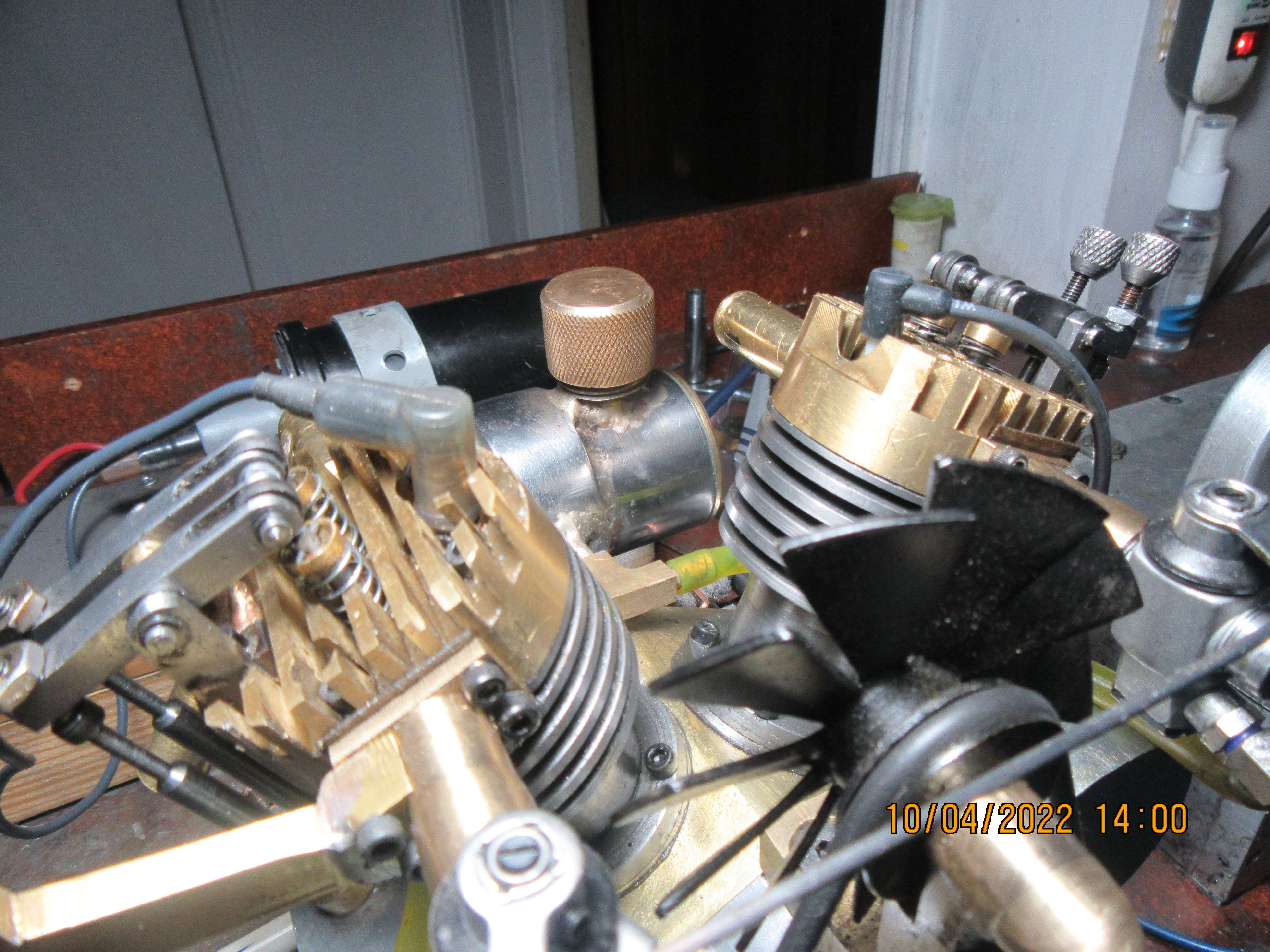 And now, it's time to go all scientific. The engine runs, but it doesn't run the way I like it to. The left hand cylinder runs like a champ, the right hand cylinder runs some of the time. Some of the time, it doesn't run. and when it doesn't run, it puts so much drag on the left hand cylinder that it stalls out under the load of carrying the non firing cylinder. Generally I use a degree wheel to set the valve timing, and lay the sparkplug out on the cylinder head so I can manually crank the engine over and watch to see when the spark occurs relative to the piston position. Somehow, that doesn't seem to be working for the right hand cylinder.---So, tomorrow I will once again get my degree wheel out and set the valve timing on the right hand cylinder. (The engine has a camshaft for each cylinder bank). Then I will pull the cylinder head off and put a dial indicator on the piston so I can set the spark timing up to occur exactly when the piston is at top dead center. The right cylinder has good compression, and the engine has "loosened up" considerably from running. I have tried a couple of different sparkplugs in that cylinder, and it makes no difference. Other folks have had better results with this style of engine, so I don't think that the problem has anything to do with the engine design.
V

Why not just run the right cylinder on it's own. Leave the plug out on the left cylinder or just hold the exhaust valve open on the left. This would make it easier to ID the cause of the problem. Is the cam timing identical with the left side?
M

A bit of a long-shot, but would it be worth trying swapping the camshafts ?

All good suggestions guys. I will let you know what happens.---Brian

Sorry Brian that one looks like an s/s boot from cncengines.com. the only thing I can offer is a longer plug. I have standard length, 1/8, 1/4, and 3/8 extended length.

Also I don't know if the auto parts stores in your part of the world has them but you can make a thicker boot using vacuum fittings. 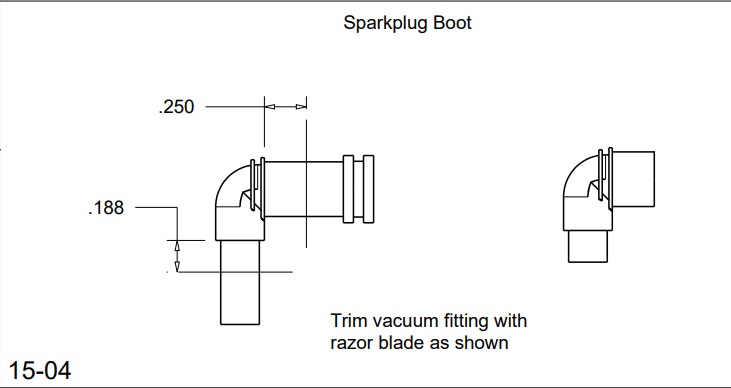 Is there any chance that one of your cams is 180 degrees off? When the first cylinder fires. the next cylinder should be starting exhaust, not compression.
R

Brian, couldn't find what spark plugs you are using. Let me know and I can send you another cap like you are using on the left cylinder.

Roy--I don't know who made these plugs. I may have bought them from you. They have a 1/4"-32 thread and an electrode like an automobile sparkplug. The overall length including electrode is 0.987", and measured from the porcelain end the porcelain (including the brass button on top) is 0.463" long. The porcelain is 0.178" diameter. (It may not be porcelain, but it is white). I would like to buy a dozen of the boots, with a dozen 14" long wire leads attached. The leads measure 0.100" diameter. I have a different email since I last dealt with you, contact me with a price in American dollars at [email protected] ---Brian
You must log in or register to reply here.