On 24-9-2006 I commenced work to build the Triple Expansion Reciprocating Engine of the reheater type, described in the attached note and illustrated with photographs. I finished the project after almost 5 years on the 23-05-2011, with a total of 4,258 hours of work.


This Marine steam engine model illustrates the evolution of the marine engine from the days of the side lever paddle engine onwards. The latest model I have constructed is the one shown in the photos, which represents the latest development of the triple expansion reciprocating engine as exemplified in an engine build by George Clark & North Eastern Marine Engineering Co. 1938 Ltd- South docks Sunderland Wallsend-on- Tiny. I believe it was first installed in a sea-going ship in 1937.

This engine is of the reheater type with balanced poppet valves for inlet and exhaust on HP., and for the IP. Cylinder a balanced flat slide valve.

This engine has cylinder diameters of: HP 28 "- IP47.5" and LP. was a massive 80" with a stroke of 54", and operated at 200 psi-fed with steam from four oil fired scotch fire tube boilers. This type of marine engine as been fitted to the  WWII Liberty ships and the SS. Maihare 1 owned by the long established Liverpool ship owners T. & J. Brocklebank. At the photos of this model, at the left is the output end with turning gear and air pump. At rear the reversing mechanism can be seen at far right.
This model although complete in essential working detail, it is not proposed to run this model under steam or compressed air, owing to the difficulty in keeping it clean. It is rotated at a slow speed from an electric motor in the base of the glass case table, with a suitable reduction gearbox.


And it has been produced with modest tools equipment built here at my home. 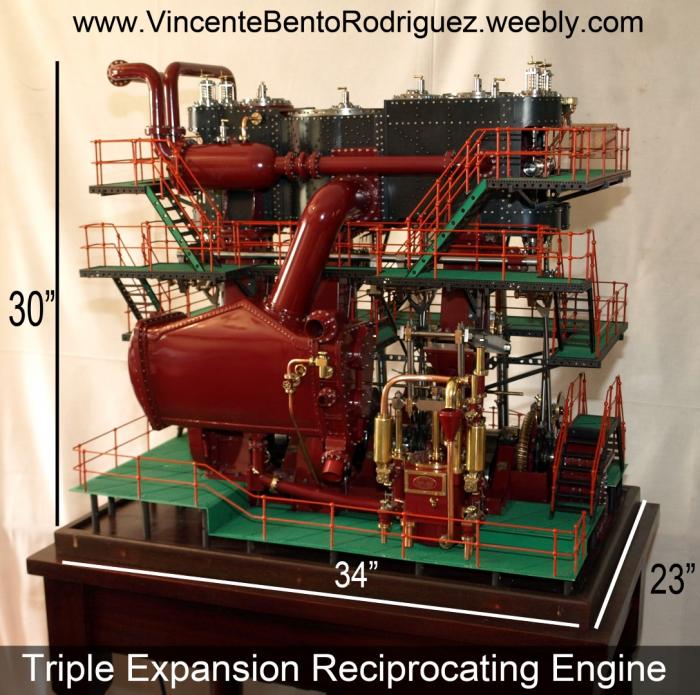 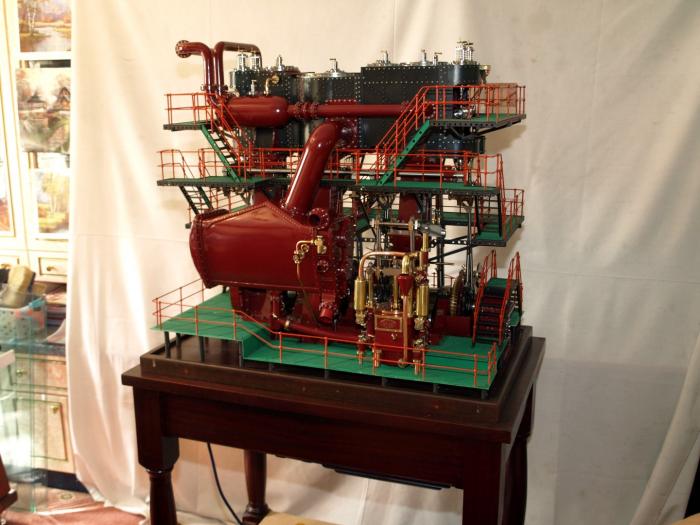 Here is a video of my machine working and a few photos of it being built.

I'd like to sell the model so can anyone point me in the right direction of where I could possibly sell it? If any more info is needed please feel free to ask Thanks for any advice 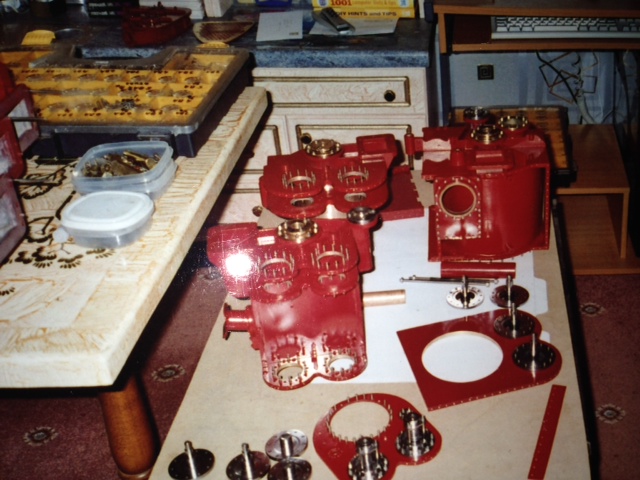 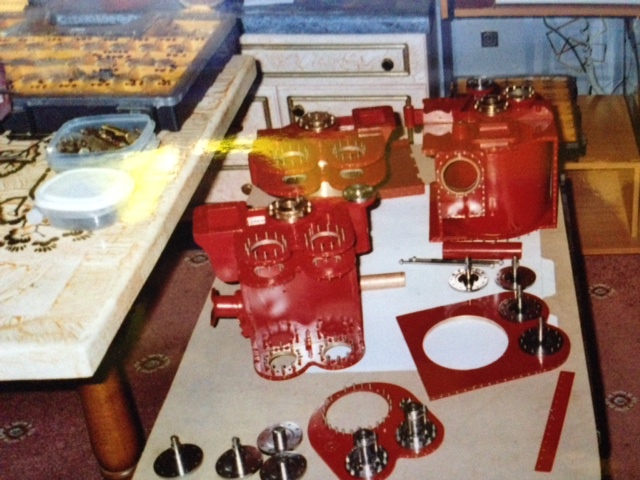 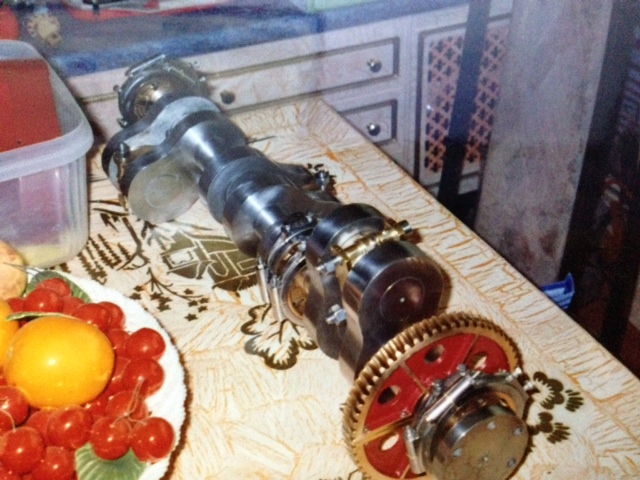 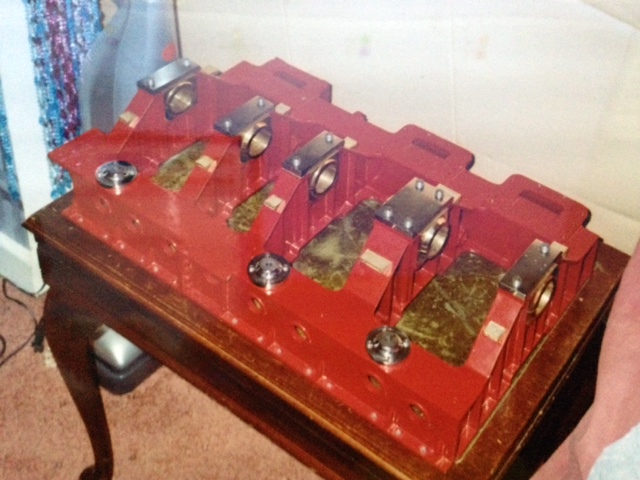 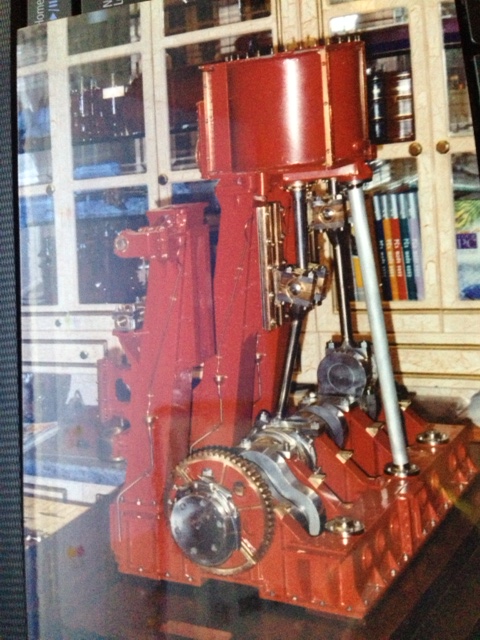 After competing such a masterpiece of model engineering I'm a little at a loss as to why you would like to sell it so soon. I would think that you would be so proud of it that you would want to keep and show others the work that you have done.
Just my opinion.
gbritnell

Yes I wondered that,I wouldn't sell it for the world
Don
V

I'm 73 years old, my health has taken a turn for the worst and I'm not expecting to see 75. There are few things I'd like to do and places I'd like to see over the next 18 month and some exra pennies will help me achieve this. Would a museum be interested in this? anyone know of any museums I could approach please? Thanks, Vincent
B

You could sell the plans!!!!
P

Vincent,
An amazing engine build and very much like those large and very intricate Marine engines built by Cmdr. Barker that peatoluster mentioned on the MEM forum in your engine post on that site. I've only seen Barkers engines in old copies of the Model Engineer magazine, and those rather poor B&W pictures just aren't that good.

I am very sorry to hear of your health problems. One suggestion, very high quality models of ships, ships engines, etc were once more than common for large ship building and ship owning companies to display at there corporate offices. Possibly contacting as many of them as you can research and find might get you one that would be willing to pay you what that engine is obviously worth. The older the company is then the better it would be, since if it's an old enough company, they might have operated engines very much like yours at one time.

It would take quite a bit of time to organize and then sell your drawings and pictures of this very fine engine. But I very much hope you can do something like that. It would be a real shame to see all your hard design work developing those drawing to just disappear.

Agree with everyone else, it'd be a shame to see your beautiful engine lost to time. It should be preserved in some place that others can see your outstanding craftsmanship !!

The Sherline Internet Craftsmanship Museum would be a great place for your engine.

Well, I've tried to contact nearly every marine engineering company in the uk and lots of museums with no luck of selling my engine so I've listed it on ebay. Can I ask as many people as possible to spread/share the info of my model on ebay.
Many thanks to everyone who posted info and help in this thread, Vincent

VincentBento said:
I'm 73 years old, my health has taken a turn for the worst and I'm not expecting to see 75. There are few things I'd like to do and places I'd like to see over the next 18 month and some exra pennies will help me achieve this. Would a museum be interested in this? anyone know of any museums I could approach please? Thanks, Vincent
Click to expand...

I'm sorry to hear of your health problems. You are a craftsman that is a beautiful piece of art you have made and you should be proud of it. Thank you for allowing us to see you creation.

Vincent,
Very sorry to hear you weren't able to sell it that way. The shipping would of course be a fairly expensive problem, but Christie's the very famous auction house in the U.K. have sold a large amount of very valuable model engines in the past. At one time there were regular notices in the model Engineer magazines of engine actions. I wish I could be more helpful though.

Yeah, its going to cost but I don't think there is any other way. I contacted christies and received the following reply

Thank you for your message. Because Christie's sells art from the secondary market only, we are not able to consign work from individual artists or their representatives.

We regret that we cannot be of assistance at this time and thank you for your interest in Christie's. "

Same engine on recommissioned Liberty ship I was on when in the Navy.
Quite a sight to see the real engine run.
D

That is one masterpiece of miniature engineering.

I am following its progress on eBay. I understand your health problems, but are you really that strapped for cash that you would be prepared to sell your pride and joy for £500? With the greatest respect, that would be an insult to your craftsmanship.

The biggest problem to selling it on eBay is its size and weight. Transporting it may pose problems. Not many model collectors would have the space to display it effectively. With no bids so far there is little probability that there will be a bidding war to drive the price up. Indeed, there is every possibility that there will be one opportunist who will throw in a minimum bid at the last minute. That would be devastating, after putting so much effort into building it - a travesty. Have you thought about at least putting a reserve price on the model? If there was just one bid, you could possibly negotiate a final higher price which would possibly be lower than the reserve after the auction ends, but more than the base price? You would have the opportunity to decline the bid.

I don't think museums in the UK would buy your model, but may well accept it as a donation. Your name would then be forever linked to your model rather than it just going into obscurity. Have you considered the Maritime Museum in Greenwich?

Whatever you decide, the best of luck in disposing of it. I also hope you manage to accomplish some of your goals in the near future.

Vincent,
Sorry my Christie's idea didn't come up with something for you. But there wording in the response makes no real logical sense to me. Again I wish I could think of something to help.

pete said:
Vincent,
Sorry my Christie's idea didn't come up with something for you. But there wording in the response makes no real logical sense to me. Again I wish I could think of something to help.

My interpretation is that Christie's sells only second hand merchandise. Who would of thought.