This is going to be something a bit different. Most of you will have a fairly good knowledge of how a hit and miss engine runs. On a hit and miss engine, the governor disables the exhaust valve when the pre-set rpm is surpassed, holding the exhaust valve open and letting the engine coast until the engine slows down, at which point the governor allows the exhaust valve to close and the engine will once more be able to build compression and fire. However, there is a different way of governing an engines speed for engines which are not "hit and miss" types. In this type of governing, the governor opens and closes the butterfly valve in the carburetor to adjust the engine speed. In a perfect world, you "dial in" the speed at which you want the engine to run. If the engine speed slows beyond that point, a linkage from the governor opens the butterfly valve in the carburetor and admits more air/fuel mix to bring the engine back up to the "dialed in" rpm setting. If the engine rpm exceeds the "dialed in" speed setting, the governor closes the butterfly valve, thus starving the engine for fuel until it slows down to the dialed in rpm. I have a twin cylinder opposed engine that I built a few years ago, which has a manually controlled butterfly valve in the carburetor. I also have a governor which was salvaged from the very first "hit and miss" engine which I designed and built. (The engine ran, but was horribly unbalanced). Over the course of the next few weeks, I am going to try and "marry" the two bits of technology to end up with a "throttle controlled" engine. Follow along. It should be interesting.---Brian

Since my twin cylinder engine is a few years old now, and has ran a lot, the first thing to do is to run a few diagnostic checks. The attached drawing and explanation will give a pretty good way to check the valves and rings on each cylinder.

Clever. Why did not I think of that? A false spark plug to connect the compressor.

So, now I have something to screw into the sparkplug hole and do my valve and ring testing. Now it's out into the blizzard to get my good wife some cold medicine from the drug store. 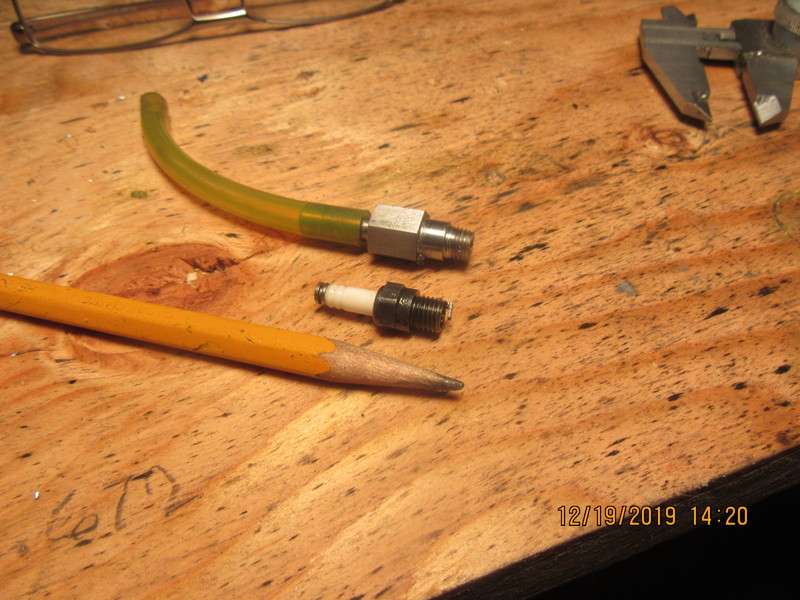 Testing the left side cylinder at 40 psi shows no leakage of either valve and no leakage at the piston. Now I will move over and test the other cylinder. 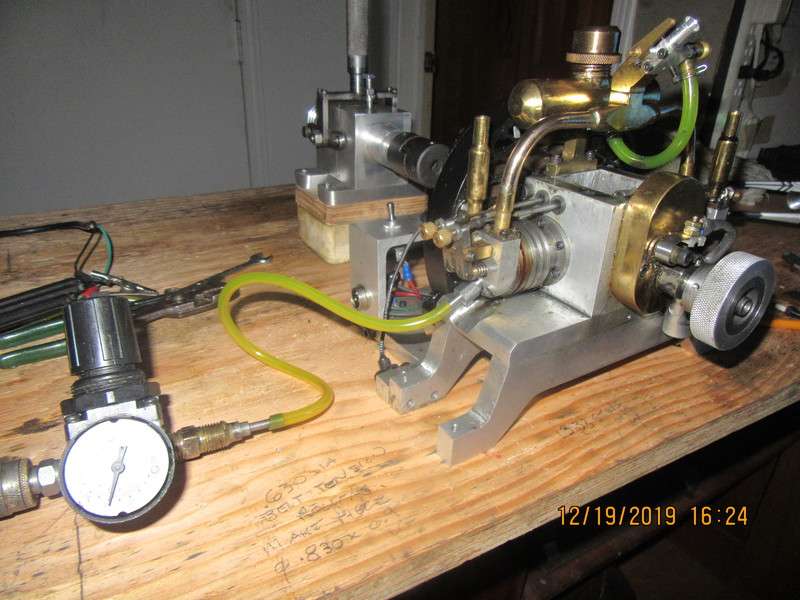 After checking the right side cylinder and discovering no leaking valves or rings, I went ahead and started the engine. It needs a bit of run time to clear itself out, but appears to be working okay. Tomorrow I will test the rpm range with my laser tachometer before starting any modifications to make it a governor throttled engine.

As with all things, the layout and development of something totally new may seem to look a bit "goofy". However, goofiness aside, the components all have to be modified and set up so it is physically possible to make and assemble them. I don't want to make any permanent changes to the twin cylinder engine, but realize that the governor may go thru some dramatic changes. At this stage of things, I have unbolted the fuel tank and set it aside, and sussed out an o-ring drive for the governor. From here I will move on to the linkage necessary to interface with the carburetor. I'm off with my grandson this afternoon to see the latest Starwars picture. 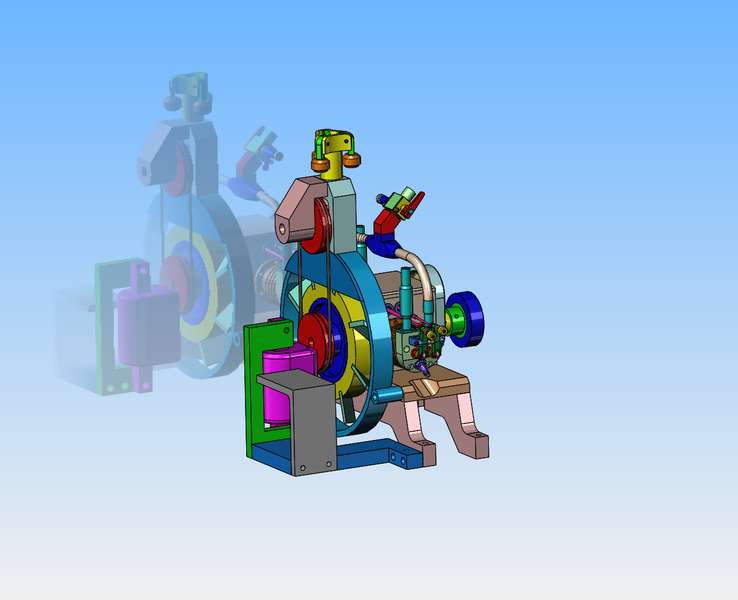 Well, here it is in principle at any rate. The "at rest" position of the carburetor throttle is normally fully open. As centrifugal force makes the governor balls swing out away from the stem-post, the center red rod moves downwards. This causes the blue assembly to tilt about the center of the hub (which is attached to the governor body with a shoulder bolt, not shown). This rotates the vertical governor arm, which is attached to the carburetor throttle with a link, and will bring the engine down to idle speed when the balls are fully extended form centrifugal force. So---Any load imposed on the engine will make it slow down. This means that the governor arms will move in towards the center of the stem-post as centrifugal force becomes less, swing the vertical arm, and feed the engine more gas to counteract the load and bring the engine back up to speed.The threaded handle with the spring below it can be adjusted up or down to put more or less pressure on the blue linkage to counteract the centrifugal force, which determines at what rpm the governor engages. There is more to this, but this is the basic concept to get your head around. 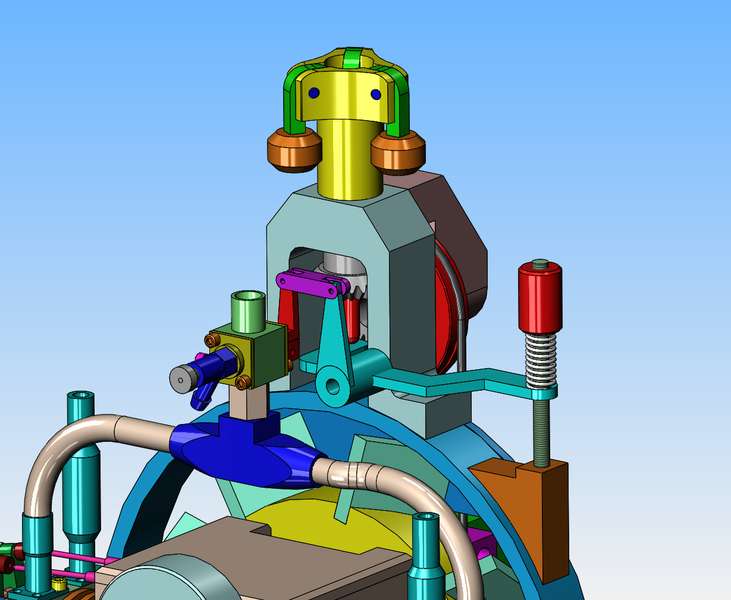 I remember you using a similar arrangement on one of your hit and miss engines a while ago to enable you to better set the governed performance. You may wish to do the same here.

There is a subtle bit of magic around that mechanical link between the governor arm and the throttle arm. It has to be a solid link in order to work and make the carburetor throttle arm move in concert with the governor arm.---But---when the engine is at rest and not running, the default setting of the governor is such that the carb throttle is wide open. These small engines are not fond of starting with the throttle held wide open. Therefore--That solid link must also be capable of being over-ridden so that when the engine is at rest and not running, the throttle arm can be held in the "idle" position so that the engine can be easily started. As I said, it is a subtle bit of magic. That solid link actually has to have a spring incorporated into it's design so that even though the governor is in the "wide open throttle" position, the over-ride can hold the throttle arm in the "idle" position. I will be addressing that issue and will post the updated solution when I get the design finished. 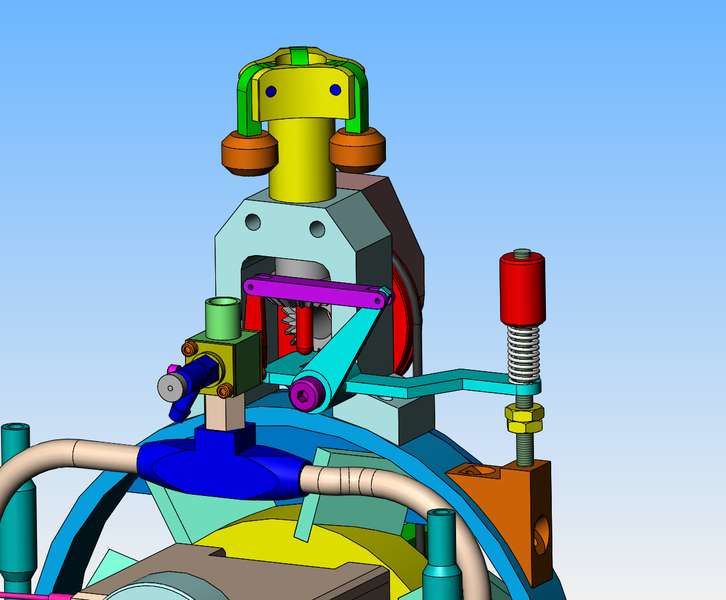 Well, I never said it was going to be easy--- 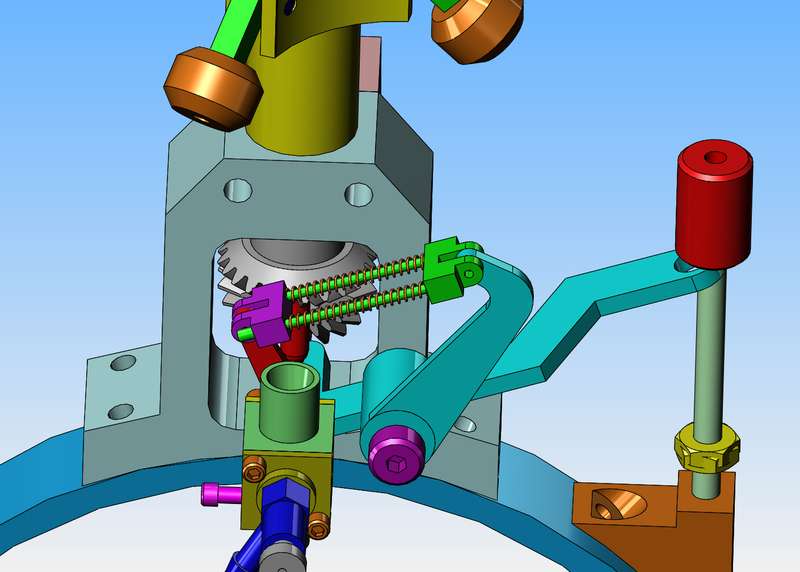 Well Sir!!!--This governor controlled throttled engine isn't for sissies. I've rejigged things about four times now, trying to come up with a workable plan. A great thank you to George Britnell for giving advise on this. I can build practically anything, but it is nice if you have some certainty that whatever you build is going to work. I've been trying to comprehend what George is telling me, and scouring the internet looking for information on Briggs and Stratton engine mechanical governors. What you see here doesn't show the carburetor, only the throttle lever. One exhaust stack has disappeared, but only because it was going to interfere with my linkage. I am going to have to make a different shaped exhaust for this side of the engine.

tornitore45 said:
Clever. Why did not I think of that? A false spark plug to connect the compressor.
Click to expand...

In the mechanic field, it's been used for decades. It's called a leak down tester

Since the arc is just a tad to big to turn on my lathe faceplate, I will cut it out oversize and then drill a chain of 1/4" holes thru as shown, then cut it out on the bandsaw, then use my vertical oscillating sander to clean up the stubs of material left between the holes.

This went much faster than I thought it would. Of course when you have a cad system that gives you all of the ordinate dimensions, it's just a matter of turning cranks and watching the dro numbers. Merry Christmas to all of you guys and girls that may be following this thread.---Brian 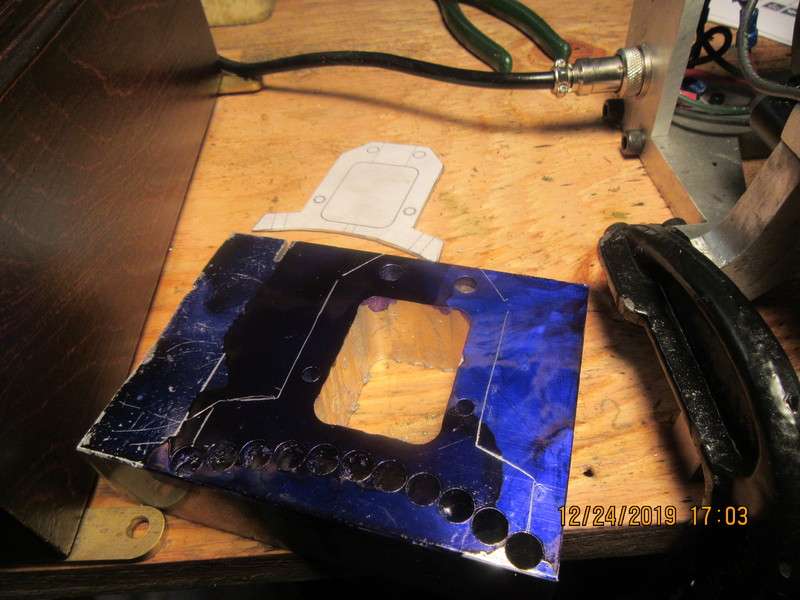 Well Dang!! I'm impressed. Christmas is being celebrated a day late here because of various sons and daughters "in law obligations". This gave me a chance to sneak down to my machine shop and build the main governor body. A bandsaw, milling machine, and oscillating cylinder sanding machine makes short work of something like this. The old guy with the white beard and red suit and bag full of presents will show up here tomorrow along with all of my kids, spouses and grandkids. 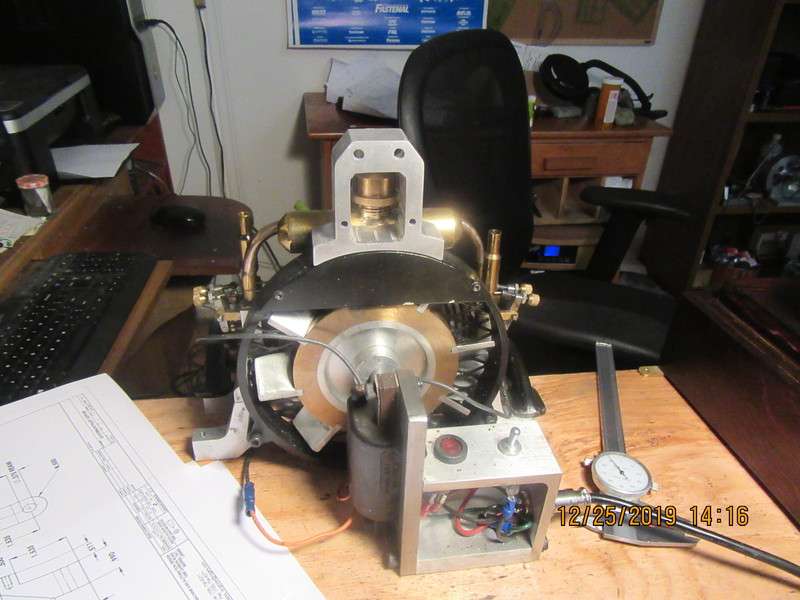 Moving forward things seem to be mounting the way I wanted them to. I am finished with the governor body main parts. Next up will be the linkage which connects things to the carburetor. 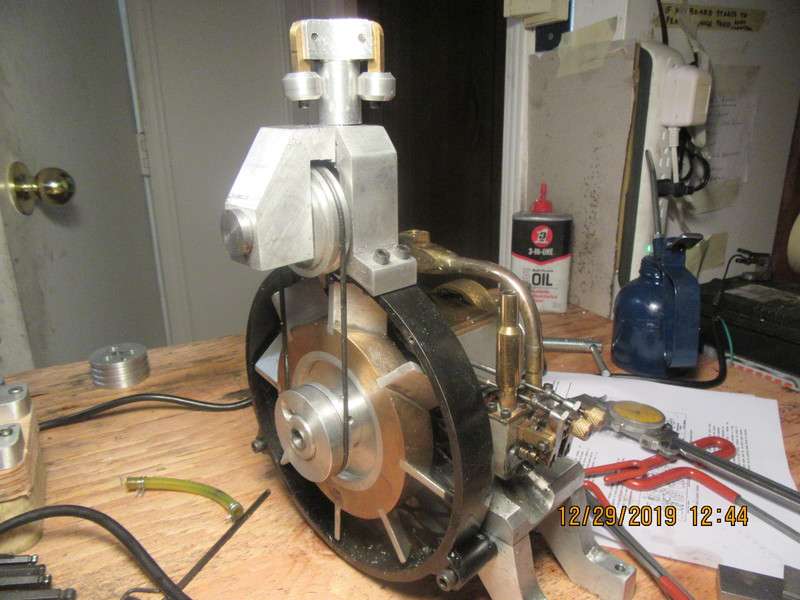 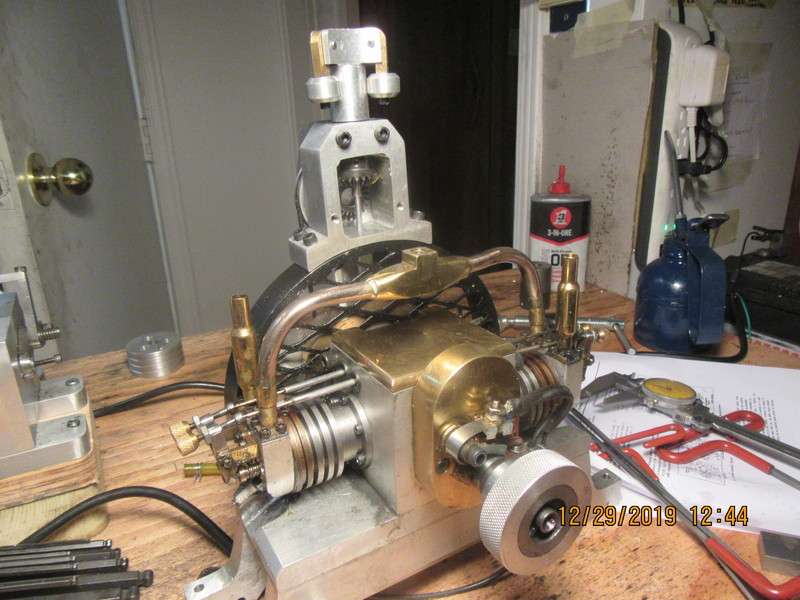 Today was governor linkage day. The brass lever is moved thru it's arc of travel by an internal rod that is acted upon by the governor weights. Yesterday when I mounted the governor body to the steel hoop around the flywheel/fan, I somehow got it as crooked as a dogs hind leg. So--Part of the day was used up dismounting it, lining it up correctly, and then drilling/tapping new mounting holes in the hoop.

I think it is cool looking.
I just hope the belt does not come off. Keep your hand on the kill switch.

If one wanted to protect against runaway in the event of a governor belt failure, a simple ignition switch could be arranged coupled to a belt tensioner, such that loss of belt tension would cut ignition.
2
You must log in or register to reply here.
Share:
Facebook Twitter Reddit Pinterest Tumblr WhatsApp Email Link