Tap holder from years ago.

Thirty to forty some odd years ago when I was doing some basic gunsmithing it became obvious that I could not afford the number of 6-48 taps that I was going through. Someone had posted pictures of this unit that looked to me as it would be of great benefit to me, and that proved to be so. I have not broken a 6-48 tap since building this unit. I made a couple of alterations to the original, one was adding some bronze bushings and the other was to use a small vise rather than the holding method as presented, which can be used but I have never had a need for anything more than the vise. It is quite heavy and very stable when locked down but I seldom need to do that. 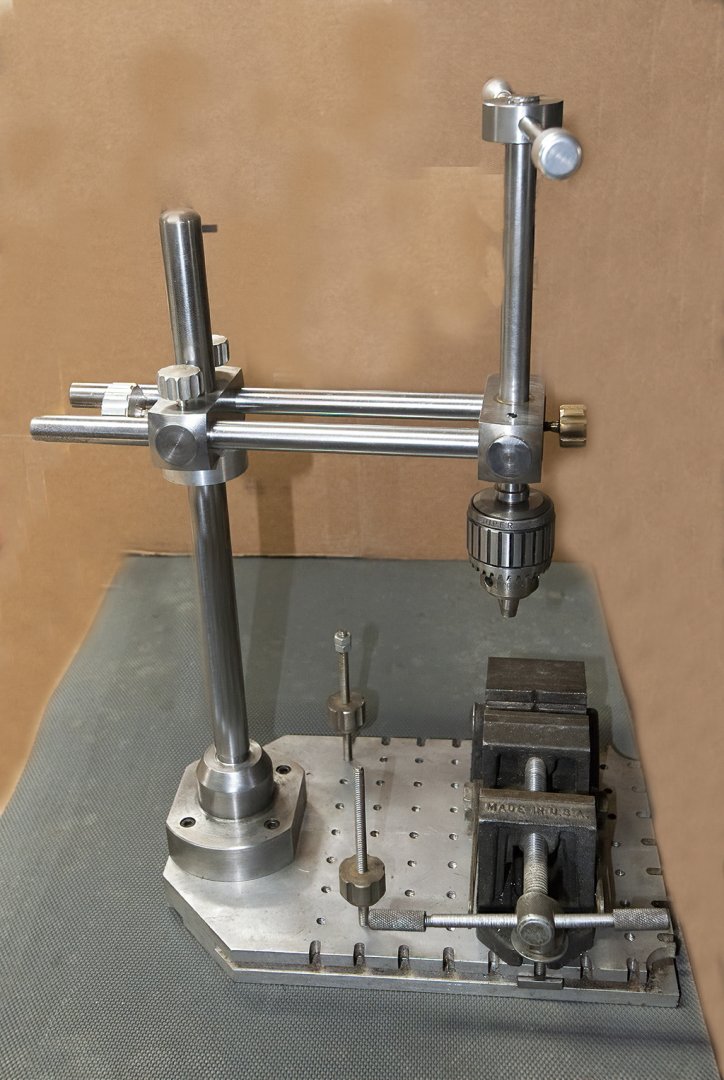 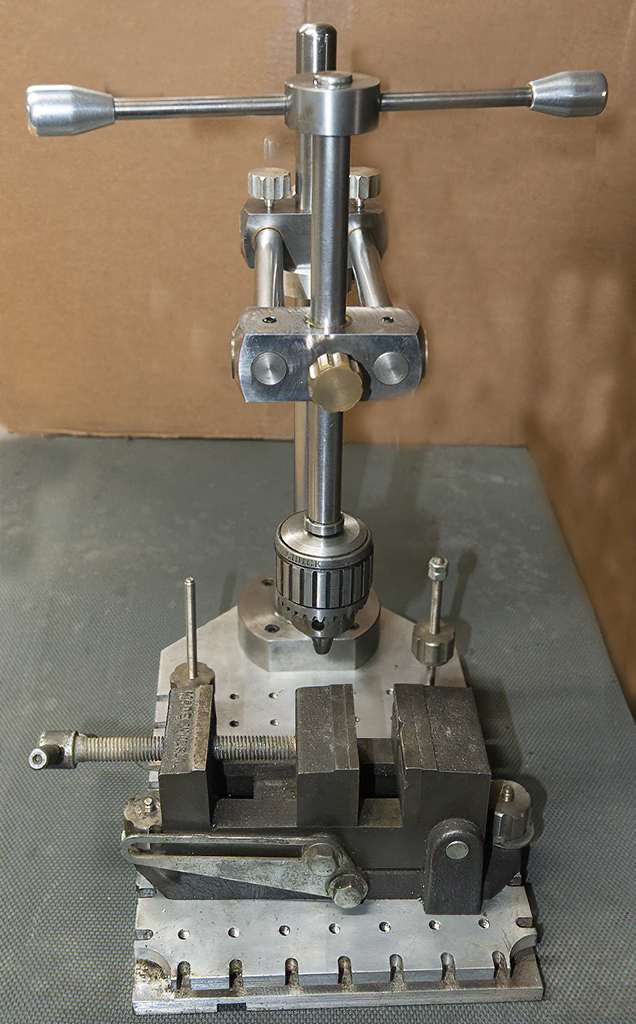 That's neat. I have a (very) small pillar drill under the bench somewhere that I had not found anything useful to do with - you've given me an idea!
T

MRA said:
That's neat. I have a (very) small pillar drill under the bench somewhere that I had not found anything useful to do with - you've given me an idea!
Click to expand...

It has been worth every bit of the effort to build. Good luck with your idea.

I bought a tapping stand several years ago and I use it frequently. It saves me from a lot of broken taps. I have modified it a little bit.

Nice build, I was gathering parts to make me one and by chance looked in the local news paper and had an add for an estate sale, picked up a factory one with a lot of machining tools and a Kennedy tool box, got it for $ 8.00 dollars because it was on Saturday and they want to get rid of all items, love yard sales, Joe
P

I got this one a few years back, works good with small taps.

Very useful but Jon( JCSteam) took a sneaky peep at mine which is a GHThomas Universal Pillar Tool.
He missed the set of staking and rivetting tools although the graduations were obvious( well through the rust. I never got around too fitting it up as a sensitive drilling machine- one never knows. I've the castings. What is interesting is that it is written up in GHT's book 'Workshop Techniques' but Jim Batchelor of Leeds went one further with it- and altered the base to fit on the boring table of his Myford Super7B thus making it it even more 'universal' and his 'would do horology. Gosh
Going backm My first one was made up of welded parts and not the catings from Hemingwaykits.
It was cheap, easily fabricated but another variation is THREE BMC A Series conrods from such things as scrap Morris/Austin engines around the 1000cc size. The conrods on the basic rods were clamped for b ' 'the small ends/wrist pins' and the big ends could take more solid pillars- for really hard rivetting.
In my case, of course , I have a Sieg C4 which has a milling attachment- seemingly no longer available in the UK- but like all of these tools , has a plethora of uses.
Clears throat a bit, and my dididing a graduating was done on a 'one hole' division plate.

Being a lazy person, I thought that an old drilling machine could be converted into a tapping head. I bought one I found on Gumtree for £10 and converted it which resulted in this item. 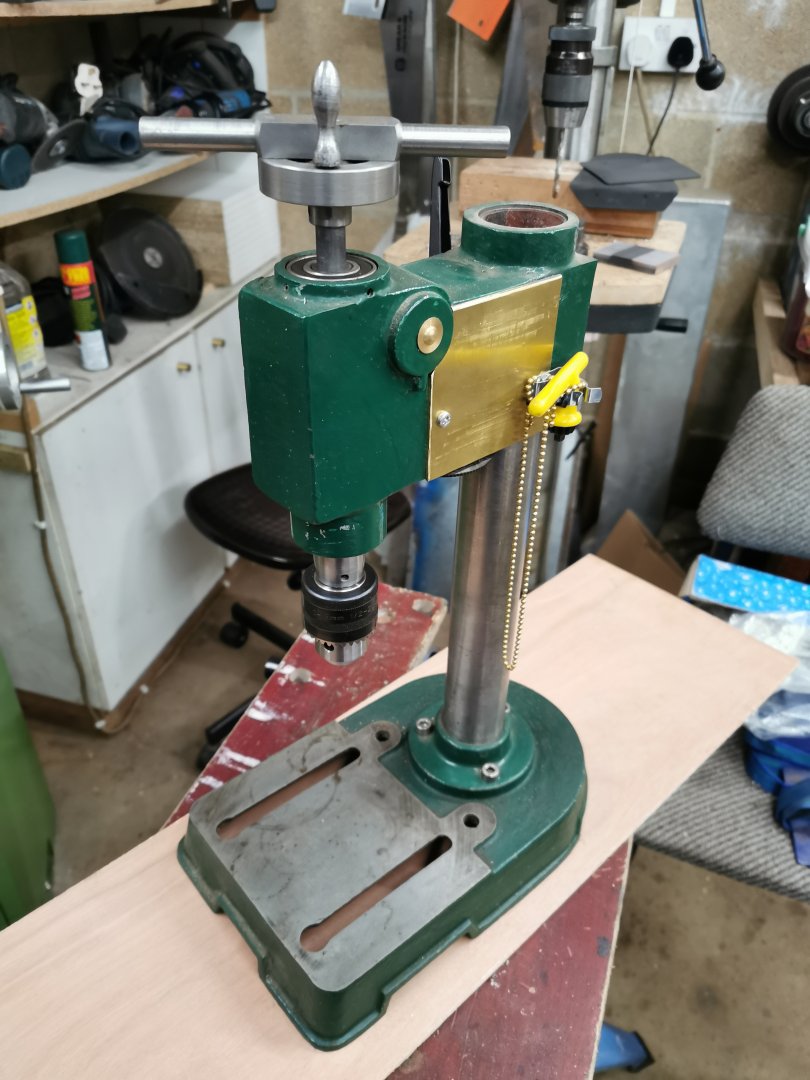 I am very pleased with it and of course, I have an electric motor and various bits and bobs for use in future projects. A word to the wise, if you choose to go down this route only buy an older Chinese made bench drill since the newer ones seem to have pressed steel tables and bases and are not as rigid as the older cast iron ones.

Good luck and thanks for looking

That is very nice, but for those people not inclined to build a similar fixture I am sharing my method.
My drill press is a small hobby Craftsman. I clamp the tap in the chuck, start it by hand and drive it in by pulling on the belt. For taps smaller than 1/4" the feel and sensitivity of pulling on the belt is just right, not much of an effort but enough to feel the tap safe progress. If the tap is large enough and the part is aluminum I may give a shot of motor power and back it out by pulling on the belt. Never broken a tap with this method. Of course is the part is already drilled on the mill or for larger sizes I use the mill.
You must log in or register to reply here.
Share:
Facebook Twitter Reddit Pinterest Tumblr WhatsApp Email Link