I have a steam engine casting kit I started to build in 1971. One of the castings wasn't machined very well so I ordered a new part from Stuart Models in England. Now the castings included with the kit that many years ago were beautiful clean castings. Today the new part came in the mail and I would be ashamed to send this part out the way it is. There is as much flashing on it as there is casting. Is this typical of the current day Stuart models? I have built quite a few models and have several in the queue to be built and none have castings that look this bad. 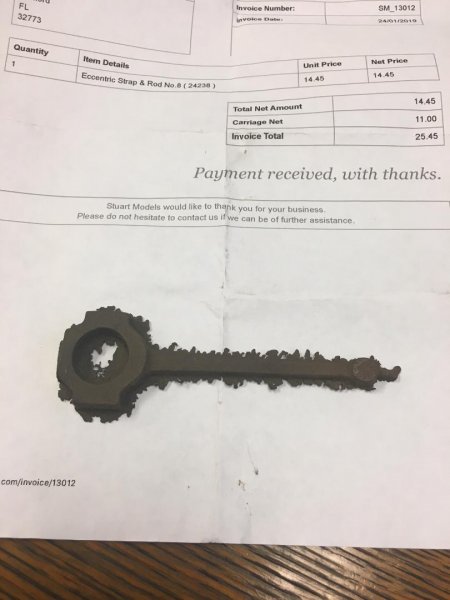 I have seen a lot worse castings than that. At least the main shape looks OK.
Think positively and say to yourself that the founders have wasted all that extra metal and you still only paid the normal price!

Just get a belt sander to the flashing and get as much off as possible before you get the file out.
Employing a bit of elbow grease does wonders for the constitution!

At least it saves people moaning about over fettling at the foundry that can cut into the part.

Cost wise I expect it is cheaper to waste the metal than pay someone to carfully fettle the flashing off.

Stuart used to produce some of the nicest castings imaginable. I understand that they have switched to another foundry??
D

The new owners of Stuart Models are the Bridport Foundry. They do their own castings.

Don't judge their products on the evidence of just one part. Let's hear from another purchaser of the latest castings for more information.

Bridport also used to cast some parts for Stuarts before they bought them.

They also bought all the old stock so may still be selling some of that, the No8 which that part is for is not one of their more popular designs so could well be old stock.
D

How is the machinability of that casting? Old ones were superb once you got thru the thin 'skin'.
J

I have purchased 6 kits from Stuart models in the past year. I got the bug really bad to build some steam engines,thanks to Mr.Pete and Tinker John!. Now I'm getting the Hit & Miss bug.

I have not had a casting look like the one that tabest55 posted about, not even close to that bad. There castings have been really nice looking casting. Of the 6 kits, 1 cylinder had a visual defect(attached picture) that would show when the engine was finished, 1 cylinder end cover had an internal hole that was uncovered while machining it. I emailed pictures to Andy at Stuart about both of the items. He immediately sent out replacements.

Tabest55, I would request another casting. In my opinion that should of never been sent out.

Doug11k, the machinability of Stuart casting are just like you described. Get through the 'skin' and its smooth sailing.

Hi
I bought the engine lathe casting kit and was delighted with it. Then I bought the new item, a planer, and it is a different story.
The drawings were hand drawn, basically sketches. Most to no scale at all. No one even checked the spelling, as there are numerous bad spellings. And words I still can't recognise, like "bearing Cab". I finally figured out that "Garage" meant "Carriage".
There is no assembly drawing. Only some very murky pictures on the drawings. Many of the parts called for as cast iron on the drawings were not provided.
Some dimensions were missing, with the part labeled Mild steel, no thickness given.
Altogether a vastly inferior kit to the old Stuart standard.
I would guess that they were bought by a "financial engineer", who hopes to get his money back quickly by moving schlock under the Stuart name. I have seen the same behavior before, when a guy bought "Stetson" shoes, and proceeded to make them out of cardboard.
Before buying anything, I would suggest buying the drawings and getting a list of the supplied castings.
One positive note, the castings were fully up to the highest standard.

Or make your own drawings and iron castings.
Some do make their own stuff, and one can't complain about quality if you cast it yourself.

Cast it yourself; make it better quality than can be purchased.
It can be done.
.
Last edited: Aug 2, 2021

This is disappointing to hear I thought of buying the planer and noticed they have changed to a more mordern looking machine. I prefer the old planer but at close to 500 dollars U.S. I had to hold off now ,Im not interested at all .
D

I recently purchased a kit from them, the drawings booklet says the cylinder is already machined and to make the piston to match the cylinder. But the cylinder was not supplied machined and there are no dimensions on the drawing. Its my first model so I have no experience to draw on and its a very basic engine so its pitched a beginners. Really disappointing experience.
J

None of the cylinders I have received have been already machined. Which model is it?
D

It's the Progress, I wouldn't mind about the machining I have the tools but no dimensions are provided for the cylinder. So I am going to have to guess.
J

Watch this youtube video on building the Progress. If I remember right he has the dimensions in the video.
J

Thanks that awesome
J

Progess was the only model I received without dimensions. But Mrpete22's video were great on teaching me some techniques. I also enjoy Mrpete22's sense of humor.
M

Stuart have excellent after sales service, send them your photograph and ask for a replacement. Their castings are generally very good as others have said and of course as with all castings it’s essential to get under the hard skin. I had a cover plate for an S50 which was very hard and I could not machine it. They provided a replacement casting after I contacted them.
You must log in or register to reply here.
Share:
Facebook Twitter Reddit Pinterest Tumblr WhatsApp Email Link