Sticky-Tools and Fixtures for the Mini Mill

Hi everybody,i assume a sticky thread means its there for quite a time,i am not familiar,but would like to suggest a thread for all innovations purely for the benchmill.Not major rebuilds/mods,or cad/cam conversions but simple tools and fixtures that newbies and others come up with to make life easier.Short description and a couple of photos with comments and further improvements
All my milling experience was limited and 50 yrs ago All i know is what i pick up from you guys and remember from my distant past.Remember nothing is too basic or simple

Seems everybody is rather shy so will make a start.
I described in an earlier thread how i made a simple RCT cutter
It was so successfull i use it all the time and decided i would make more as i need them.The one i made was good for facing but if i needed a square cornered rebate i had to finish off with an end mill.HSS will lose its edge very quickly on scale covered HRSteel.I needed one badly for my next job so with a bit of 16dia bar and an odd RCT i milled the recess,drilled and tapped for M2.5
and away we go. It cut a nice slot in alum about .628/.630 wide.So lets call it a 5/8" endmill
I needed it to make a start on a clamping set.I machined a 45o incline on 2 pieces of 16mm thk HRS and then cut a series of 2mmx2mm steps up the incline,the new endmill did each cut in 1 pass easily.Made 2 clamps and all done.The 2 blocks give a range of 0 to 60,(in 5 secs sounds like my car
Will continue to build up a collection of cutters and clamping set

Here are two contributions that have made using my mini mill easier and more productive. Both are very simple.

The first is a set up gauge to quickly position the vice after it has been removed from the table. The parallel and squared brass bar is wide enough for accurate alignment to the table using a square. I use it often.

The second is related to the mini mill as sharp cutters make the work easier. When sharpened they are almost as good new cutters so you can get a lot of life by just sharpening the ends. A 3000 rpm motor with cup wheel and a cutter holder that runs along a fence is all that you need. As you can see it doesn't need to be pretty. Once you sharpen all of your dull cutters the grinder sits in the corner of the shop so no need to spend a lot on making it fancy. 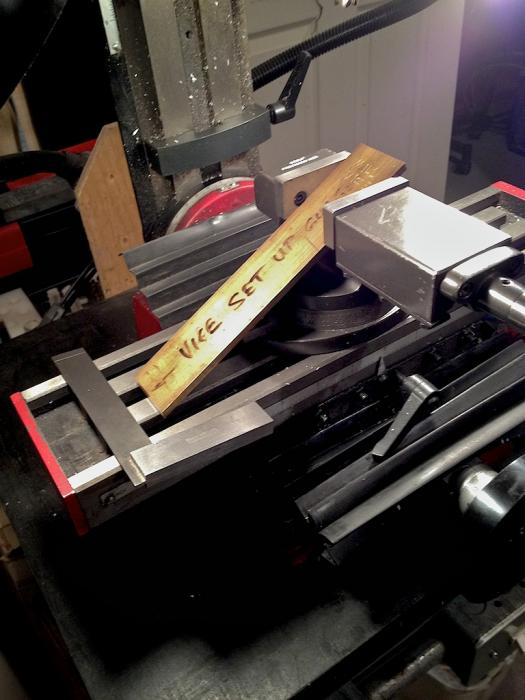 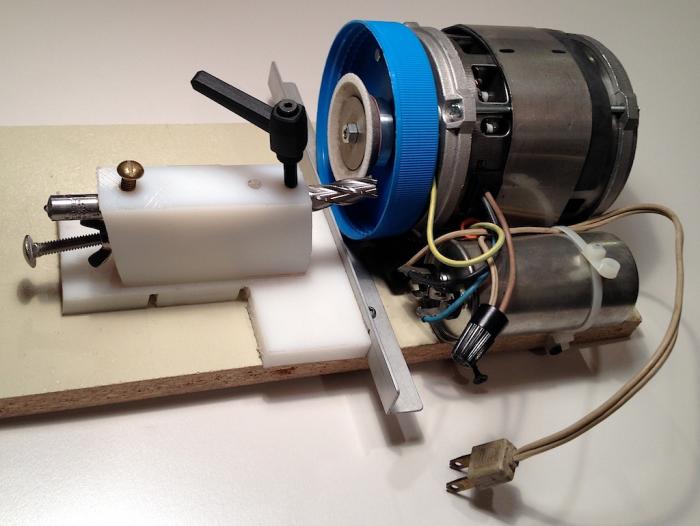 Hi, wheres the pictures of the end mill grinder setup.I am desperately
looking for ideas for simple tool and cutter grinding. PLEASE

forget my last post,i now see the photo but can you elaborate with more details
Sketchs/dims etc Regards barry

Hi not a fixture but a quick way of fitting DRO on the mini mill. Does anyone have an idea for fitting stops to the table. The blued slab is the start of a sub table which will be threaded with 6--8mm for for fixtures to bolt straight on. 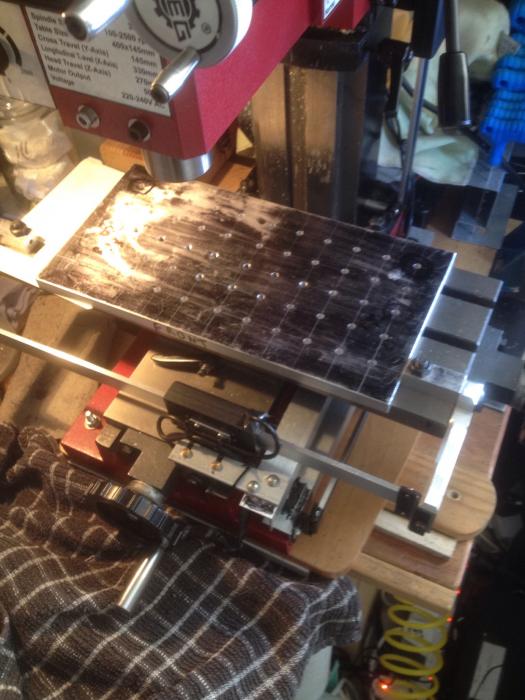 Baz
This end mill grinder thing comes up and up. Basically, it can follow making up a set of crude collets From SQUARE or rectangular stock with holes drilled in to cover your dimensions of your end mills, slot drills whatever. Being square, it saves the worry about indexing, rotary tables and such that many do not possess. Once you have ONE lip in position, the other or the remaining three automatically are in line.
Basically, you need a double ended grinder with two rests. They can be wood so long as it is smooth.
Both are set at a position where the end mills will be dead on centre with the grinder spindle. The angles are 5 and 15 degrees. It means that the grinding follows doing the primary and secondary cutting edges of your mills. In practice, most mills etc are dulled and only a slight even lick on all edges will get things right.
The foregoing - despite its simplicity- is what one of my tool holders does on my Kennet.- at a vast cost and then time and effort to make it.

Moving on- a bit. This principle is why I have little time for belt sanders which I know you like. With a grooved/slotted bit of square bar and the odd grub screw, you can do lathe tools as well.

Following the same bit of metal with a hole in it, putting longer rods in on a mini mill with grub screws or wing nuts is one way of adding stops. True, you can put a clock gauge on, you can make turrets which rotate or even play with tilted dividing heads, collets and such wonders but a bit of square and a hole and grub screw will do most things.

For the record. Two old fellows saw all this simplicity and how it would be lost. We set off to get it on the net- using articles which had appeared variously in magazines like Model Engineer. Other old and often dead engineers had left them as their contribution to our hobby. And then we ran into 'copy right' issues.
I scrapped my stuff and assumed that Jim Early in the USA had done likewise. Jim is no longer with us and then an e-mail arrived with the sad news. It also said 'we have a lot of the articles which were not destroyed'.

Perhaps it may explain a lot of things. Certainly, I am not going to 'do' photographs- even if I had a digital camera.

You'll have to with the 'words'- sorry!
D

My cutter grinder was a prototype and since then the idea of a square block to hold the end mill is better. I like using Delrin or HMWPlastic for holders as they slide nicely against a fence so making square block holders would be a good way to go.

My prototype did the job so it remains a useful tool for me. In fact, I tend to resharpen the same cutter over and over leaving my infinite collection for the next machinist to inherit.

The only features of my cutter holder that are unique are the diamond wheel dresser on the opposite end and the adjustable screw with locking wing nut to increment the cutter to the wheel.

Take what you like from the design and create your own. It's an evolutionary process and the best will survive.
D

One more idea for the sticky file.... If you are buying a small precision vice get two. Having two identical vices gives many more options for holding long work pieces on a mini mill.

Thank you for your info JDP will try to play about
Thanks also to Norman.Although his advise can be drawn out and a bit complicated,i did get the gist of it and will give it a go.As i understand you
i will make say a 16mm sq block drilled each end say 10 and 12mm.For 2 sizes of endmills.The same will be locked in position wit a grub screw with the teeth aligned with the face of the block.By then orientating said block the teeth are all automatically aligned.It then only needs a way to correctly angle the block to the cutter.Correct??
In answer to your last comment ,yes i like a linishing machine BUT NOT FOR GRINDING ENDMILLS..I have just used my 9" disc to chamfer and radius
the clamps for the clamping kit.Removes large amounts of matl very quickly/accurately and with great finish.Saves a lot of grunt.Every tool
invented by man has its place,and for a model engineer its great.I dont understand your aversion to them. Regards Barry
G

Thanks Baz- for getting the message. As for grit, it's a historical thing when I grew up with people who got silicosis. Happily, I'm not to bad as I kept away from such risks as far as I could.

Back to nice easily made blocks with holes in them? If you were to examine designs for lots of grinders, this is the way tooling for them was drafted. Nothing fancy but it works. Now, I have a belt sander - which I bought- for the ability to use abrasive wheels. However, if one uses belts they will remove lots of metal roughing out but I used a diamond wheel to simply touch the worn teeth. I use a black waterproof felt marker to judge when the thing is sharp. Again, I use a dental mirror to examine the progress.

I'm a simple soul and use simple tools-usually. Possibly living on a desert island - well, it is really for 2 or 3 months a year makes me think this way. Every field is bordered with stones, one house dates to pre-history and there are taulas and talyiots galore. These old guys succeeded and threw stones at each other and invented ballistics.

Hi Norm,just made a 16mm sq holder double end for 10 and 12 dia.Principle looks good but its new to me.Nice and simple.Next to extend the 2 small rests
to form a larger more useable table on the 2 wheel
grinder and sort out a jig/fixture etc.Will plot progress
G

Great news. Wishing you success. However, the bad news! Flushed with your success, now make one with a bit bigger square stuff. Drill a bigger hole, and put a drilled sleeve in. You can then graduate the sleeve- and do round tools. D Bits, and round lathe tools and if you put a couple of collars on so that will rotate, you can do punches and screwdrivers and ---things. All that you have done is bored a hole or two and tapped for grub screws- and look on what is an achievement which will continue.

'This Happy Breed' as the Bard said

Yes i had thought of one block and multiple sleeves so just did one for the 10 and 12mm which are in need of a touchup to see how it works out
Also have a redundant collet set which i thought might mount in a sq collet block etc etc Will keeep posted
You must log in or register to reply here.
Share:
Facebook Twitter Reddit Pinterest Tumblr WhatsApp Email Link