You can cut fast and loose with gear centrelines - although I frown on the practice, split the error pro-rata to the tooth count and you should be O.K.

Perhaps mill the pinion (small) gear first and measure the centre distance as you go when making the spur - until you achieve the desired centre distance - or measure over rollers etc. etc. - have fun !

Make your gears to the correct size. If you mess with the blank diameters it screws up how many teeth fit on that pitch circle. If, after you make the gears there is interference, then just kiss the tips of the teeth with a file. 0.004" is the thickness of a piece of printer paper. You won't have to take off very much.---Brian

I have found that there are many errors that contribute to gears not fitting including crankshaft runout and even locating a gear with a grubscrew that the easy solution is to slot the mounting hole for the cam gear. of course that depends on your engine configuration. 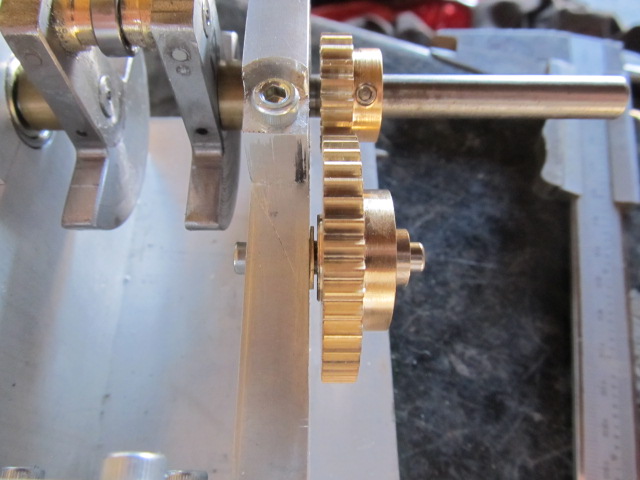 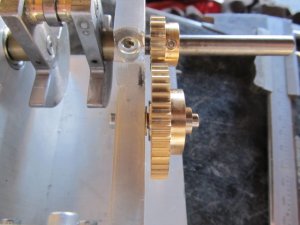 You should be OK, The tooth forms will be a bit off.
Commercial gears are slightly smaller than normal FYI
You can also make a dummy shaft block that is adjustable to your desired spacing and run in ( Lap) the gears. They will be real smooth then
Rich
D

Since you are only off a few thou how about boring a slightly larger hole in the correct location and making a new shaft that fits the over size hole and the gear?
C

Pondering this, at first I thought that Ken's solution of reducing the pcd of both gears proportionately would be the right way to go.

Then I realised that, assuming you are using standard gear cutters, this would mean that both gears would have slightly thinned teeth, which would result in slight excess play (lash) because your cutters are still making normal sized tooth spaces.

So I thought it might be better to make the smaller gear to standard, and reduce the PCD of the larger wheel only. You would then be cutting a standard wheel gap to fit a standard pinion tooth. But then the wheel tooth is still too thin for the pinion gap. There is also the consideration that cutting the pinion small would increase any undercut, but at 39T that should not be problem anyway.

I don't think the resulting tooth thinning of 0.0003" is going to matter all that much. It is enough to make the difference between a fit that runs nicely and one that doesn't want to, so making standard gears and just truncating the tips will not help - it is the flanks that determine the fit, not the tips.

For something closer to perfection, reduce the ODs and nominal PCDs, but cut both sets of teeth slightly shallow to compensate for the thinning. I think I could work out how to calculate by how much.

The late, great, Keith Duckworth would say words to the effect that most problems aren't so simple when examined properly.
C

I agree with Richard and Charles it would be un noticeable for the purpose. on the other hand Danallen has a pretty good idea
M

You can adress this issue with some slight profile shift. you turn the raw gear to the right diameter for a standard gear and when milling the gears go deeper or less deep to adjust the axes distance. This is common praxis in real world gearboxes (for example motorcyle, etc.). The teeth for sure will get wider or smaler, but thats no problem.

As Charles points out - there will be errors - there always is - as involute cutters are supplied in tooth number ranges - which is obviously a compromise.
To be truly correct each tooth count requires a unique cutter.
You can overcome the "tooth narrowing" problem by using the next highest tooth count cutter in your series.
Although in your case the error is so small as not to bother and at 39 & 78 tooth you are probably in the middle of the #6 & #7 cutter ranges in any case ?
Get your head around what you are trying to accomplish (understand gears) and you should be fine.
I always generate my gears in Autocad - even when using off the shelf cutters - so I can "see" where the errors will be, how I'm going to deal with it and to generate over wire dimensions from whatever rods I have to hand - without resorting to cumbersome calculations that presume you will have the correct diameter rods to hand. 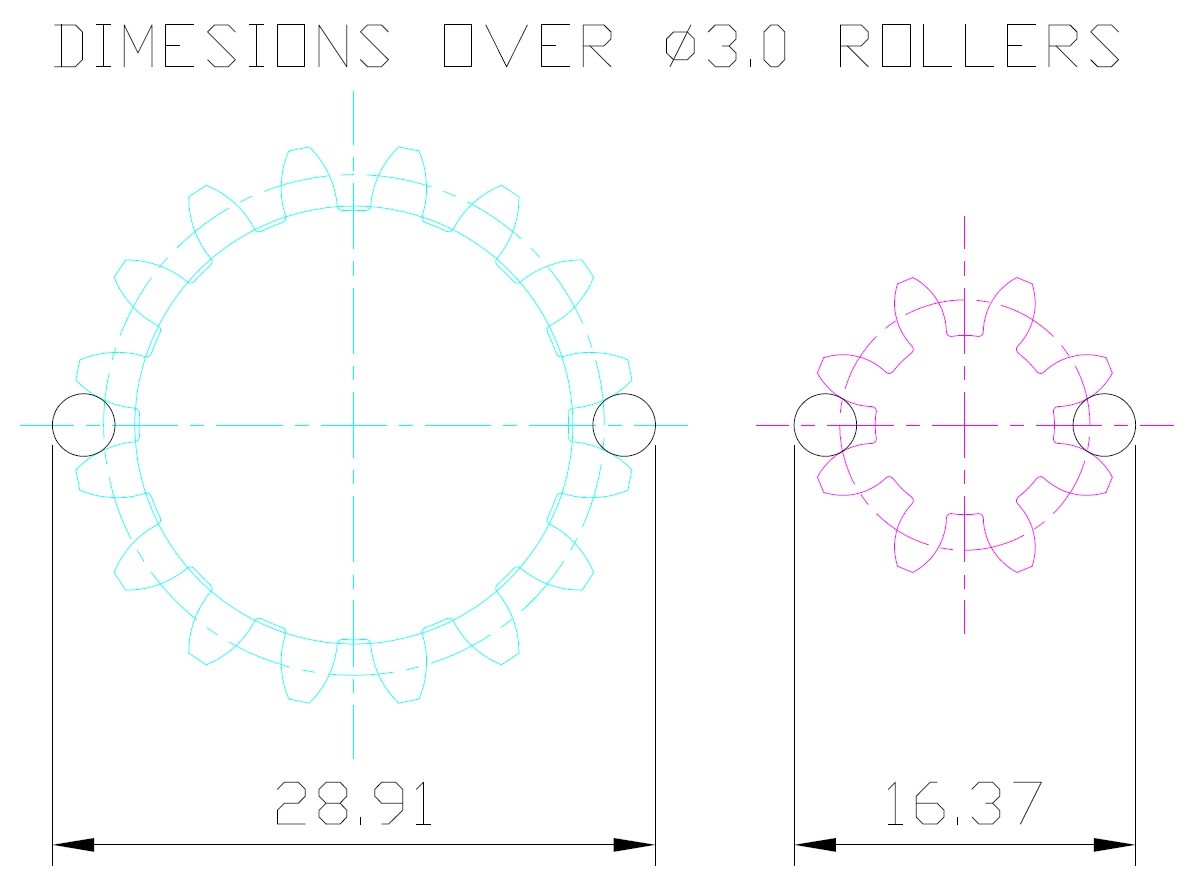 Making a dummy shaft and/or run in rig as suggested above are also good ideas.
Regards, Ken
Last edited: Oct 28, 2020

Steven
You could increase the size of the already drilled hole and fit a plug using retaining compound, then drill the hole at the correct spacing, this would allow you to cut the gears to the correct depth.
You don't say which engine but if the gears are driving a camshaft running through the block repositioning the shaft could cause other problems down the line.

Getting the exact fitting gear set or backlash I call it has been a major problem for me in the past. Just a few thousands of an inch can make all the difference in final fit and my building skills are not always up to par. I have a current build thread going in the "A Work in Progress" section of this site named "Building a Flat Twin" that shows how I overcame this problem. The cam gear is supported by round bearing blocks with their centers bored 0.010 off center to allow for adjustment up and down to get that perfect fit. Rotating the blocks together maintains a level cam shaft and once the desired fit is found the bearing blocks are bolted in place. Evidently this won't work in many applications but some form of this solution can be a golden.

Follow Brian Rupnow advice.
If the gear bind or are too tight you can always reduce the diameter just as much as you need. Gear have an allowance: the dedendum is bigger than the addendum so your difference may just disappear into the allowance.
T

The goal is to duplicate that shaper. You can create a multi tooth rack gear cutter that will generate a involute as accurately as you want by the number of cuts. and and Gear cutting with a rack form multi-tooth cutter He added a camera to get a magnified view to increase accuracy. and To finish the gear and get an absolutely perfect involute gear you can then use the approach to make a gear with a tap. Need to cut another tool of us a acme thread tap but that may also set the size of the gear to a none standard. Have not done the math to check it out. IF you do not have a divider head the is a solution. Very basic but better description of principle. Steve Bedair's 9x20 Lathe Site To cut a spur gear the worm or blank needs to be angled so that the cut is at the correct angle. Also this can be done better on a mill. shown cutting an acme thread on a lathe. Hobbing gear with tap - how?
Last edited: Oct 26, 2020
6

The term "You're overthinking it" comes to mind. Steven, your solution is completely reasonable. Reduce the gears to mesh properly and you will never know the difference. Yes, the tooth form will be slightly narrower but this application won't put much stress Remember, on lathes for instance the mesh is adjusted by moving one or the other of the gears. You don't always achieve the "proper" center to center distance but they work. Sometimes they are noisier than other when you set them up but they work fine anyway. Give it a try. Rich
C

There is overthinking and there is not thinking at all. There is indeed a clearance between root and crest provided by the dedendum being greater than the addendum. So if the gears are binding, how on earth is reducing the OD supposed to improve matters? There is already a clearance there. Any binding will be on the flanks. The OP wanted gears to run at a slightly reduced centre distance. One way to do that is to cut the gears slightly small. Making standard gears and turning or filing a bit off the tops of the teeth isn't.

Speaking from experience, having made many gear sets---If the center to center distance is a bit less than it should be, the tip of the teeth on one gear will interfere with the root depth between the teeth on the other gear. Filing a bit off the outside diameter of each gear does solve the interference problem. Charles is right, the teeth won't mesh in a textbook parabolic manner.--However, nobody will know this except you. It really doesn't seem to matter to these small model engines.

While reading Ken I's gear cutting pdf, I saw "radius measuring attachment for calipers". Where can one find this attachment? I have a 6" Brown & Sharpe (Tesa) caliper.
Grasshopper
R

davidyat said:
While reading Ken I's gear cutting pdf, I saw "radius measuring attachment for calipers". Where can one find this attachment? I have a 6" Brown & Sharpe (Tesa) caliper.
Grasshopper
Click to expand...

I posted the plans under downloads - It's my own design after I couldn't find anything appropriate.

It is for measuring large radii and has nothing to do with measuring gears (like the caliper suggested by Richard) - I frequently have to reverse engineer bottle profiles in order to handle them robotically - the bottle manufactures are more secretive than the KGB and never hand out their drawings - so I have to measure them. Stupid to be sure - but then there's now't queerer than folk ! 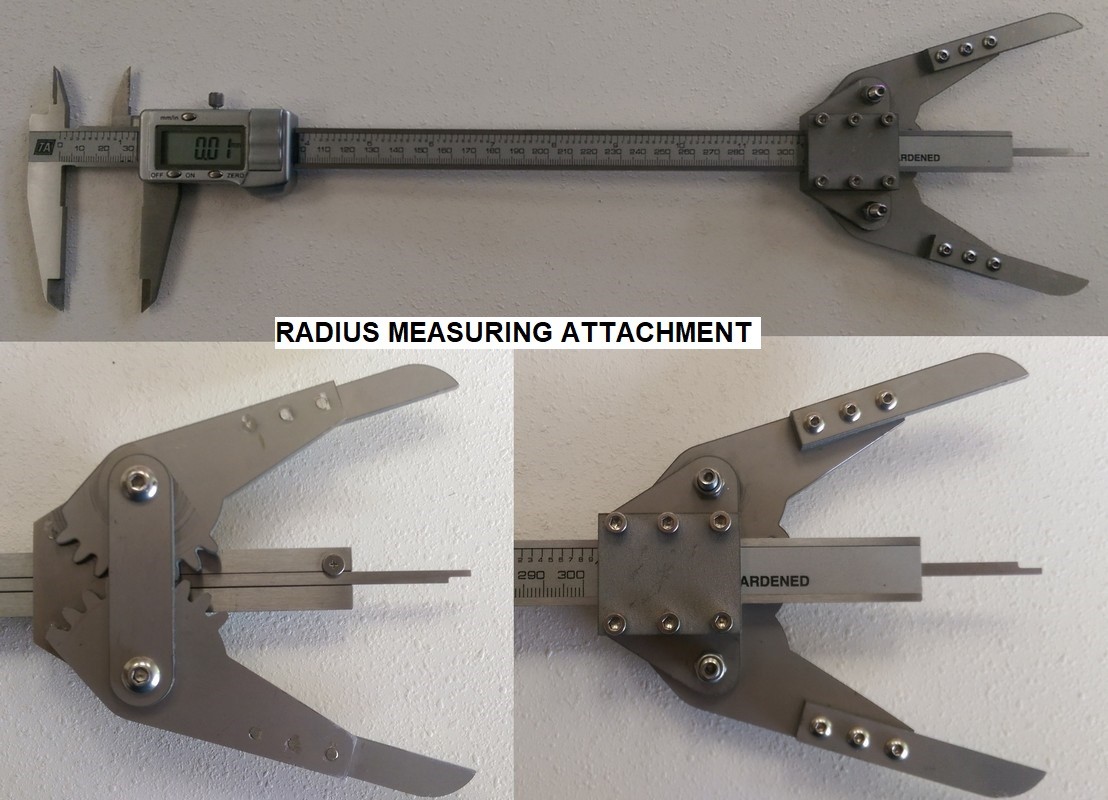 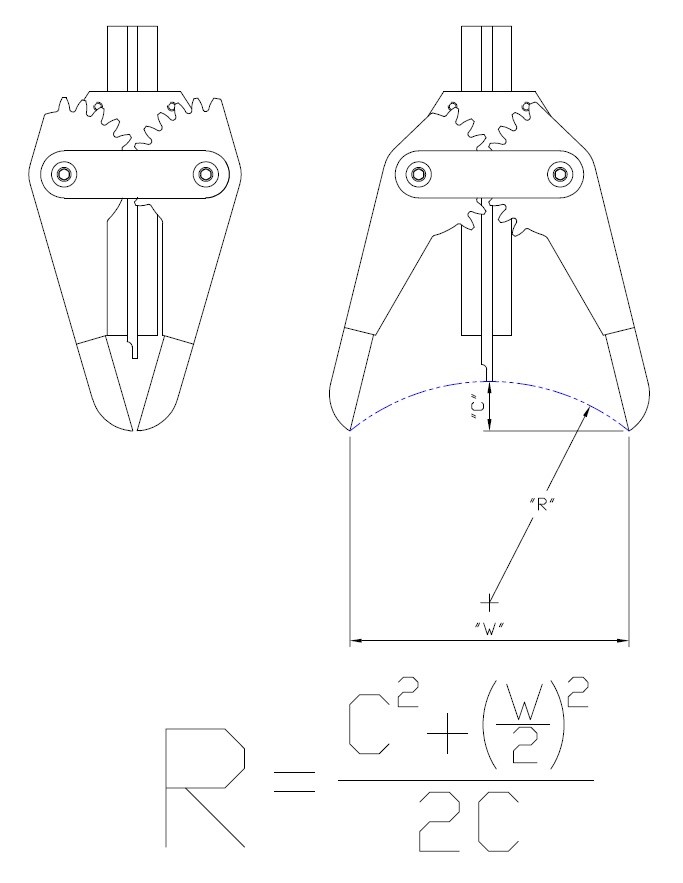 I only mentioned it because the M2 gears - which synchronise the arms - were waterjet cut.