Hello all. Been lurking around and was looking at what people are using as far as lathes go. It got me wondering.. how do the old heavy 10s stand up against these newer small machines? I see a lot of the newer lathes look OK for Chinese made but it's just pics I'm looking at.
Last edited: Mar 7, 2019
S

Which terrible people are you talking about and what is an old heavy 10??

Google the Chinese lathes you are interested in and read about them. I think there are quite a large number of posts from people whom do upgrades on these machines to improve on there shortcomings. To be honest I generally prefer a machine with a good name and some history behind it such as a Myford, Lorch, Star lathes etc. Although most of these manufacturers are now defunct spares are generally easy to obtain.

OMG sorry for that post. I never meant to say terrible people. Auto spell on phones suck. Now I need to remember what I was trying to type and fix it lol
A heavy 10 is a small 10 inch swing lathe South Bend made back in the 40s and 50s. Maybe later models as well? They are well known in the United States. Curious if any hobbyist on this form are using them and how they stack up against other lathes.
Last edited: Mar 7, 2019
S

No problem, I was only joking. I did some research on the Southbend lathes you talk about. They look well made, to be honest if I had one of those I wouldn't be wanting to swap it out in a hurry if it was in good condition.

{Curious if any hobbyist on this form are using them and how they stack up against other lathes.}
I have a South Bend heavy 10 inch lathe..If you can find one buy it if you can they are getting pricey and only
going up in price {I am in the USA} so lots of information about South Bend here...
A

The Southbend is probably better if you can get a good one. I have the British made Boxford "A" which is a copy of the Southbend . These are very common in the UK as they were supplied to high school metal work shops by the thousand .
Most have now been passed on to the model engineering market.
Although up to 60 years old , most of these lathes have had very little use and can be obtained for a lot less than a new Asian made machine.
I will be controversial and say that a Boxford "A" is superior to a Myford ML7 being a much more rigid , has a roller bearing headstock and V way bed.
These older lathes can be refurbished if necessary without spending a lot of money .
Dan.
G

Yep I have one already. It's in great working order as of now. I can't help but to just look at it and smile. Such a neat piece. Would love to fully restore it some day just to do it. I work with cnc machines at my job. mainly lathes and vtls. Decided that this is the only thing I really know so here I am. With a Bridgeport mill and a south Bend lathe in my garage. Now is time to learn more and work on some cool projects. That's what lead me too this forum.
D

Unless you find a Southbend lathe covered in Cosmoline and stored in a military warehouse, it will have lots of wear and require restoration. My 9 inch Southbend was sloppy near the chuck and it required compensation for wear to create precision work. It didn't have a quick change gear box so cutting threads was a set up exercise. I didn't consider it very powerful so small cuts were best. The flat belt drive was a safety feature if a cutter crashed.

These machines are over 70 years old and still work but if you want tighter control a new machine will always be better, in my opinion.

A friend has a restored Southbend lathe in his CNC machine shop that he uses to correct out of spec parts from the main production line. They do have value.
S

The South Bend “Heavy” 10 lathe (officially the 10-L) is a substantial lathe built on traditional South Bend design – triple V-ways, plain bearing spindle, and flat belt drive. The bed is much wider than the 9/10K lathes. These lathes were produced right up to the end of South Bend production. The lathes built in the 1970s and newer had replaceable inserts spindle bearings, making headstock refurbishing much easier. The spindle bore was more than sufficient for internal 5C collets. A D1-3 spindle nose was the norm in the later years.

The plain bearing spindle restricts the RPM to 1300 or lower, so it is not a high-speed machine. The plain bearing and flat belt do impart smoothness to the rotation, so vibration markings on the work surface from gears or roller bearings are eliminated. They are capable of taking substantial depth of cuts.

A significant number of these lathes were put into high school shops. While these machines may have been subject to abuse by novice users, it is unlikely they have received much wear. I would prefer the “Heavy” 10 over any of the imported machines of similar size.

I have a South Bend Heavy 10 with the Quick change gearbox. I've had 51 year relationship with it. I trained on this very lathe in 1968 -1971 in High school and bought it from the school in 1973 when they were getting new machines. Came with every thing, stand, motor, 4 jaw, 3 jaw, taper attachment, all for the scrap price of $100. Tried to buy them all but they would only let me have one. It's a 1941 or 1942 and still holds any tolerance I care to hold. I've made a lot of engines on it. The only thing I replaced was the forward - reverse switch. After years of use in the fwd direction the hold latch was worn. I just crossed the wires in the switch ( the reverse direction is almost never used) and back in business. I wouldn't be afraid of an old machine, remember "All new machines are made on old machines."

Many years ago I was in a shop that made the steam trains for Disney land and Disney world. They had a a large lathe that was made in 1890. They used it for turning 24" driver wheels. I asked the operator what kind of tolerance he was holding with it. He proudly said" .0005". Can't ask for much more.

Besides old machines have a lot of parts and tooling available at decent prices!

For equal 'capacity' machines, take the thousands you would spend on a cheapie and rebuild the SB to new. Ground, fitted, etc....

And you'd have a machine that will last longer than any two of the cheapies.

And be rebuildable to new again.

Yeah, always go for the old iron and when the numbers check go in a hurry!

Thanks for the input. I'm reassured I've made a good choice in machines
Here's a pic of her. only one in my phone and dirty from being used. Still in need of a good 4 jaw and a collet set.

That pic of the South bend looks to be a very nice machine, even has the taper attachment. If you have the milling attachment, you will find it to be very useful as well.
G

No milling attachment unfortunately but I do have a Bridgeport so I'm good there.
S

DJP said:
Unless you find a Southbend lathe covered in Cosmoline and stored in a military warehouse, it will have lots of wear and require restoration......
Click to expand...

My heavy 10 is quite old but lightly used and easily holds tolerances of less than 0.001 over a couple of feet. The biggest negative of the lathe is that it is in such good shape that it is unlikely I would find a larger used lathe in better shape.
S

That is a very nice looking SB

DJP's "Unless you find a Southbend lathe covered in Cosmoline and stored in a military warehouse, it will have lots of wear and require restoration." is not quite correct. My 13" South Bend (originally shipped in 1958) has a tag from my old college (I may have used it long ago). I bought it from a car guy's estate. Came with plenty of tooling (that's a 3/4" drill chuck in the tail stock). The bed ways are flame hardened with no apparent wear. The capabilities of this lathe are far ahead of the typical small China import (1600 pounds of real lathe vs a couple of hundred). These can be had for around $1000 if you look around for a while. As mentioned, a lot of them have been in school service, so show evidence of the occasional crash but little real wear. Of course, takes up more room than the bench tops... 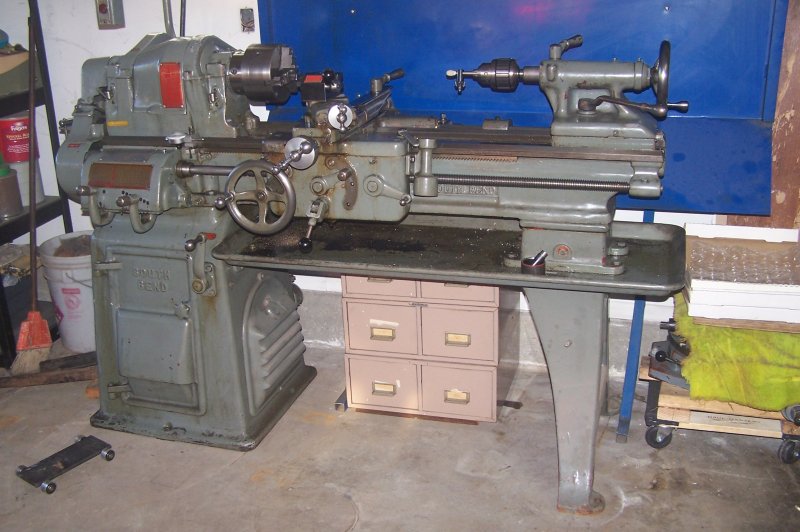 My SB was 75 years old and a simple test of almost locking the carriage near the chuck then cranking the carriage away for the chuck showed that there was a lot of wear. A buddy still uses one in his business for small jobs but it required a full rebuild so my only experience is that after 75 years they are well worn. The 'Cosmoline' comment was to make this point. Mine was not used in a school that I know of and it was a bench top 9 inch model so maybe less robust.

I still have a fondness for that machine even though it has been replaced by a Myford S7. The fondness comes from familiarity. The first lathe that you get is always the best one and I am a fan of older machines because they suit me (old guy with an old shop).

My SB 9 also consumed a lot of oil at the main bearings and I didn't spare the lube to keep it going for another 75 years.

If you have to pay to fully rebuild a lathe I expect that buying a new one is in the same ball park for cost. Taiwanese machines have been proven so that's where I would source a new lathe but as mentioned I bought a Myford instead.

I also have a SB 9" and an Enco 12" (Taiwan, belt driven). On paper the larger Enco should be much more capable than the SB 9", but the Enco has several serious design flaws that need to be contended with that make the SB 9" much more fun to run. (Both have quick change gear boxes, and comparable tooling, so it's an oranges to oranges comparison.) A SB 9" Model C (or any other lathe) with change gears is a PITA to run and I'd look for something else if I was considering a purchase.
D

Yes, my SB 9 was very basic including a box full of gears for thread cutting. The replacement Myford S7 has some opposite controls like the carriage engagement lever for the main screw is on the left side. It is taking a while to get used to these little differences. I don't consider it a design issue. It's just different.
2
You must log in or register to reply here.
Share:
Facebook Twitter Reddit Pinterest Tumblr WhatsApp Email Link