Hi, I have hesitated a for a few days on posting this as I feel that compared to a few of the gorgeous cam grinding machines/ jigs that guys here have built mine looks rather shoddy and quite inaccurate. That said it has produced some satisfactory results for me and the best cams I have produced so far. So Hopefully it might help others or even inspire them to have a go at building something similar.
This was built in around six hours and totally from scrap metal. There was no real maths involved which might appeal to some people, just getting the parts to sit square and roughly on centre line of your bench grinder. I can’t comment on any errors this design might introduce into your cam design but I could produce a couple of different cam versions to try in my engine that worked well.

I worked out that I could have the master cam on the same shaft as the blank and that I would have to make an odd shaped master cam to produce the miniature cam that I needed. I couldn’t quite picture what it would look like so I filed up a rough miniature cam and put it on my machine with a pencil offset by 15mm mounted the the other end of the rotating shaft. I then held up a price of card and turned the spindle that drew the picture of the master cam design, one size of circle then an offset circle protruding from the first circle. It was then that it became clear in my head what the master cams needed to look to look like. The main diameter of the master cam produces the base circle then the protruding circle produces the duration and lift. The base circle on the master cam could be any size but the relationship between that and the protruding circles radius is what seemed to change the duration whilst the amount of protrusion is what altered the lift on the cam. I’m sure the relationship between these two circles and the amount of protrusion could be explored in much greater detail but I have made my cams and they work well.
I bolted my two disks together so that the second disk protruded from the bigger disk by 2.5mm and had a protrusion duration of 120 degrees. This meant that the cam lobe produced would be 2.5mm high with a duration of 120 degrees. In the engine this resulted in a fair bit les than 240 degrees of duration on the crank as my valve train is quite inefficient. The next master cam I designed allowed for the loss of duration by making the second disk bolted on the master cam slightly bigger to give a longer duration.

I hope you can understand the way I got this to work. Hopefully these pictures will help clear things up a little. I’ll answer any questions the best I can.

Thank you for reading, Sam. 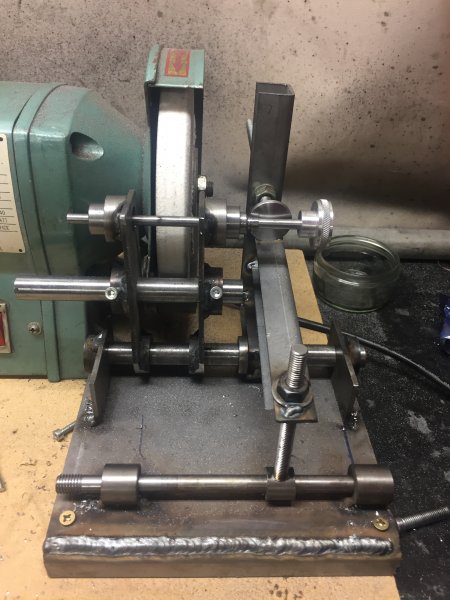 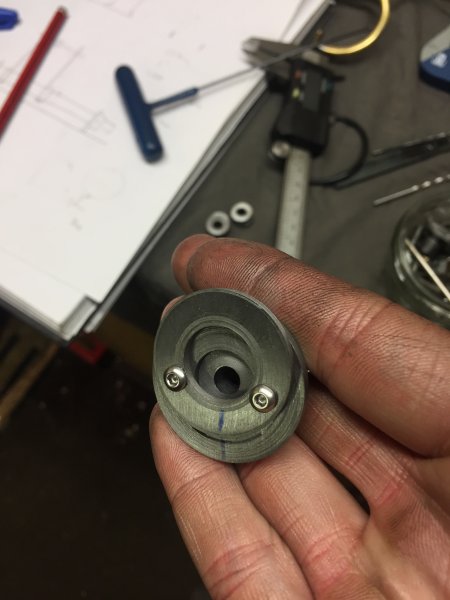 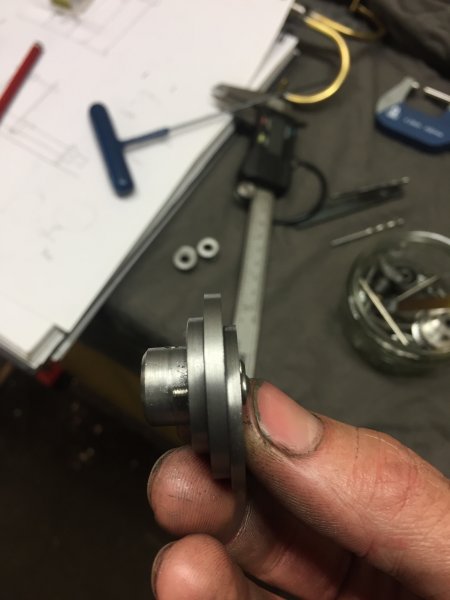 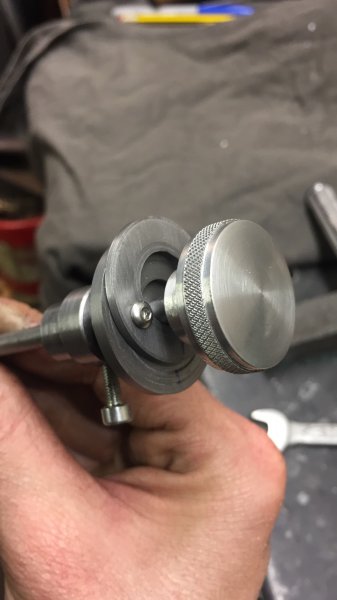 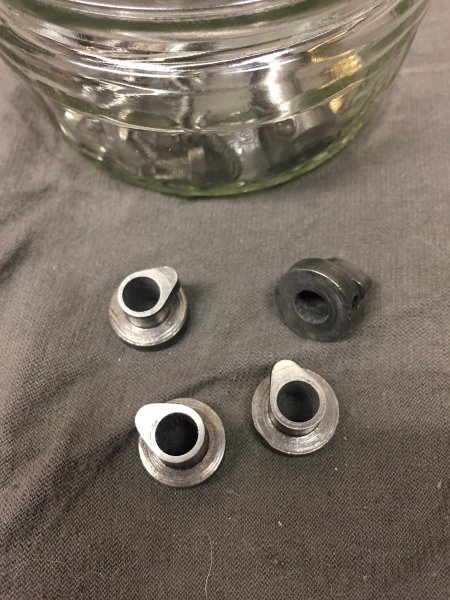 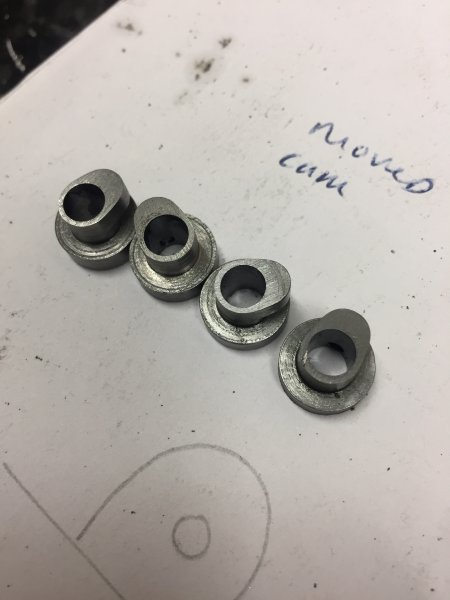 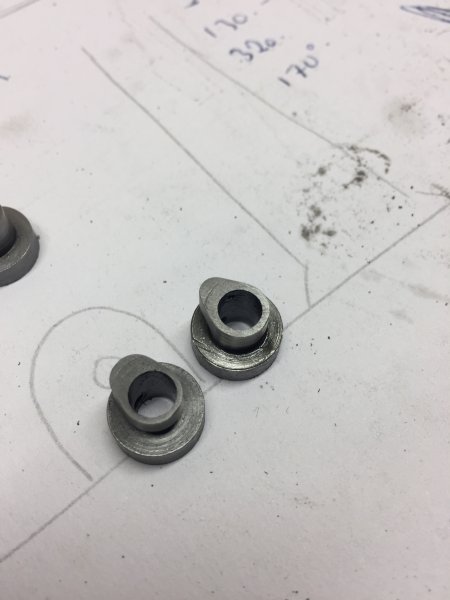 Nothing to be ashamed of there !
I find a lot of designs for cam grinders are overly complicated and yours appears to be brilliantly simple and it works !
I like it !
Any chance of a few photos side on showing the rocking mechanism ?

Hi thanks for your reply . Here is a video link that might explain slightly better than I can with words.

cooksservices said:
Hi thanks for your reply . Here is a video link that might explain slightly better than I can with words.

Am i correct in thinking that the in feed is via the threaded rod and nut at the front ?

Yes that’s correct, there is also adjustment on the master cam rest to allow for different master cam sizes. As my stone seems quite soft I cut the bulk of waste off the cam with a hacksaw first to minimise the wear. Then they are case hardened cleaned up and set in place on the shaft using the grub screw. I’m sure a one piece cam shaft could be made with this design by adding a degree wheel and pointer on the shaft and master cam as the rocking art can be moved across around three inches.

cooksservices said:
Yes that’s correct, there is also adjustment on the master cam rest to allow for different master cam sizes. As my stone seems quite soft I cut the bulk of waste off the cam with a hacksaw first to minimise the wear. Then they are case hardened cleaned up and set in place on the shaft using the grub screw. I’m sure a one piece cam shaft could be made with this design by adding a degree wheel and pointer on the shaft and master cam as the rocking art can be moved across around three inches.
Click to expand...

Being able to grind one piece cam would be a bonus !
I will have a look at your other videos on your channel later today !

Thanks for posting this interesting design. It also seems to work very well in your engines.
I read your post carefully a couple of times but I still can not quite understand how to make the master-cam.
Therefore, I have a few questions...

1) How do you decide what diameter shall the off-set disk have? I get that the cam lift is determined
by the amount of offset, but how do you control the opening angle, since the two are bolted together using two screws and therefore not adjustable.
Where the two discs meet there is always a non-tangential blend. I suppose this is taken care of by the large flat disk that you rotate it against.
But I can imagine that the opening and closing starts somewhere where this blend occurs.

2) How do you control the cam-nose radius? I see from the photos that you have produced both narrow and wide nose cams.

Thank you for your time.

Hi Thank you for your interest.
It is the size of the off set disk in relation the the base circle disk that determine the nose radius. If it’s a bigger offset disk the the nose radius will be bigger and a smaller disk the radius will be smaller. I really only worked it out by trial and error. I made a cam and installed it in my engine then measured the duration that it produced. Then I made another size of off set disk and did the same experiment.

With regards to the non-tangential blend I didn’t give it too much thought. I think for a model engine that doesn’t really need to make any real power and won’t see prolonged runs it’s not so important. That being said all of my cams still seem to produce a nice smooth opening and closing action.

I’m sure that with some more experimentation some different cam shapes could be made. I had considered the possibility of off setting the disk to one side slightly as well is upwards to give a quicker opening action and a softer valve closing action.

The cams I had produced so far all seem to work well so I have just stuck with them.

If there is anything else I can help clear up please ask away. I will help the best I can.

Thanks. I really like your simple approach. The results speak for themself. I'll have a shot at it myself.
cheers, Branislav

Please keep me updated with your progress I’d love to see another interpretation of it. I’m sure many improvements could be made but I had no idea if this would really work so it was built very quickly to prove the concept.

As it turned out is has produced some good cams but I do think it could be built better.

If I can help you with anything else don’t hesitate to ask.
W

I see nothing here that should have stopped you from posting! If anything it shows that there is always room for innovation and simple is often good. By the way thanks for the video also.