I’m trying to locate a set of drawings for a breach loading yacht signal cannon.

Any help anyone can give me any in locating a set would be greatly appreciated.

I remember once seeing one with a swinging breach, a lanyard operated firing pin, and working “shell” ejector.

The builder made his own “shells” from brass stock that had lip at the bottom like a shot shell and a hole in the Center to accommodate a primer.

Made of brass it used black powder held in by a paper wad in each “shell”. The total charge was maybe a teaspoon or two of powder. The bore was about three quarters of an inch.

I am interested in the breach and shell ejector design more than anything else.

Careful with a cannon that big Jennifer. I fired a 1 inch cannon in my front yard and blew out all the windows on two sides of the house and one side of the garage. No wonder I got the thing for free, so did the next guy.

I would think that the Royal Yorkshire Yacht Club in Bridlington would have the 'real ' thing.

What has to be recalled is that most sailing clubs on the North East Coast have 'Frostbite' races and I guess that the RYYC has an event between Christmas and the New Year.

thanks for the heads up and the huge smile on my face,

It is a gift to a friend who had one stolen from her sailboat. It was fired at sunset when she would lower her yacht ensign while in foreign ports.

Kind of a silly ceremony to mark the beginning of the evenings imbibment;-)

Thanks I think I’ll go knock on their door and see what they know, I believe they are open on Saturday late afternoon.
F

I think there was a build for a breach loading Winchester signal cannon on the practical machinist forum a few years back.
G

I'm Norman by the way. Frazer is the guy up at British West Hartlepool where they hung a monkey dressed in a French cabin boy's uniform it couldn't speak English and they thought it was a spy. It will be denied

And Jenny, I'm supposed to be going to Flamborough Head. Another salty tale!

Norm. I actually raced Sabots. An eight foot class dingy at the Newport Beach Yacht Club back in the late 70’s

Some days when stuff is not going right in my machine shop I feel like taking a dive off Flamborough Head!

Thanks Wob I’ll check it out
G

Sabot Class? what a lovely little 'kipper box'! I bought the children( then) an International Optomist dinghy which is another lovely thing.
Being utterly hopeless at English sports like cricket, football and rugby, loved 'wet' sports.
Clears throat and admits that the scar and skin graft on my left palm was from boatbuilding. There is still a sailboard ex my now grown up son which he left in the rafters of my garage and quite a few photographs of me white water canoeing and 'somewhere' a sailing instructors certificate. All of which, I confess being half blind at almost 90 are only fading memories now.

I used to have a 5/8 bore cannon/ Used 150 grains of powder by volume. That is considerable more that a teaspoon. A teaspoon should be manageable without blowing out windows.

It’s all about the pressure wave created. If you set the thing off on the wide open bow of a boat there is not much to break.

On the other hand if you fired it off in an enclosed alley way where the wave of pressure can be funnelled in one direction or another or perhaps bounce off a surface or two, windows ... and ear drums.... will break.

I still have not found a good detailed drawing of a breech assembly and shell ejector.

That patent drawing is close though.

The owner of a shop that specialises in them sent me this link, http://landandseacollection.com/id271.html if you drill down into the images, some of them have good views of the breaches of the various cannons.
G

New construction! Is this all actually legal in the UK?

Good question, I’ve just written a local gunsmith about it. I know they are legal to own.
N

Their is a build log on here somewhere that detailed a breech loading .22 build. If I remember correctly it was a deck cannon from a ww2 era warship. I also believe the drawings were from popular mechanics drawings originally , and with the age and so forth , the poster did all the drawings in cad. It's a very nice design and build that could easily be turned to look like a traditional signal cannon. Here's a screenshot for one of them to get an idea.

I do have to agree one inch is a whole lotta bang. I experienced a neighbor that built a .50 caliber , and without knowing after he lit it, I thought my dad knocked everything off the garage walls at once.

Funny I was looking at a similar gun for the breach design.

The signal cannon it will be replacing had a much more traditional profile, with a wooden carriage and old naval cannon shape.

.22 is a tad small. It will be replacing one that chambered a 10 gauge shot shell, and made the appropriate report.

The vessel it will be sitting on is s 55’ Choy Lee ketch. She has very traditional lines with a center cockpit, clipper bow, and poop deck. A modern naval gun would appear out of place on her. 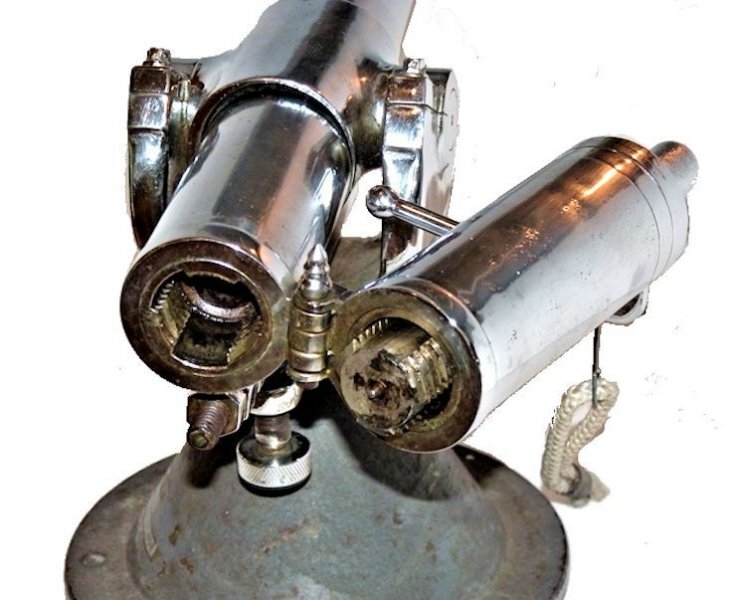 I would not make the breach near as long however.

The gun it is replacing had a horizontally split breach where the top half hinged open, and the lower half that contained the shell ejector was part of the whole signal cannon. It always scared me a little as it locked shut with a very small latching mechanism. The beefy quarter turn square thread arrangement seems stronger.

Of course firing blanks means the pressures on the breach and barrel will not be nearly as high as if it were firing a projectile. I think a gas tight seal would be more important than s super strong one.
G

This is what I received from a commercial gun smith regarding legality of a black powder signal cannon:

** ***
My legal teams interpretation is thus. If its capable of firing a lethal projectile then its licensed. The fact is that if you where to do such a thing it probably would destroy the cannon would not come into it. So it comes under section one signal apparatus.
*****

So I imagine if I made it in a way that it could not fire s projectile if be ok to make one. I’m thinking a small taper in the barrel that would not allow a projectile to pass thru from the breach would do the trick.
2
You must log in or register to reply here.
Share:
Facebook Twitter Reddit Pinterest Tumblr WhatsApp Email Link