Refurbishing the chassis of a model Bowman 300 steam locomotive.

When visiting a garden railway show earlier this year (2018), I bought a model steam locomotive chassis for £30. The seller said that it was made by Bowman and indeed it was, a Model 300 which in 1928 cost 18/6p (84/85p). The purchase consisted of a complete running chassis, footplate and burner; the means of holding the burner to the foot plate was missing. It wasn’t in too bad a condition most of the paint was missing and it was dirty with a bit of rust.


The first photograph is from Bowman’s 1930 catalogue where the price has increased to 21/-, a Guinea or one pound one shilling; our old monetary system was wonderful, everyone’s mental arithmetic has gone down hill since we went metric! It is just as well that there was no ‘Trade Description Act’ in place in 1930. The model is described as an 0-4-0 well it does have 4 wheels but if you want to be pedantic it is an 2-2-0 as only the rear axle is driven. Some of the claims in the text are also a bit optimistic; however, Bowman models were simple, inexpensive, robust if a bit variable regarding their manufacturing quality. The designs were for the most part was good which perhaps allowed them to work when somewhat out of manufacturing tolerances. (P001) 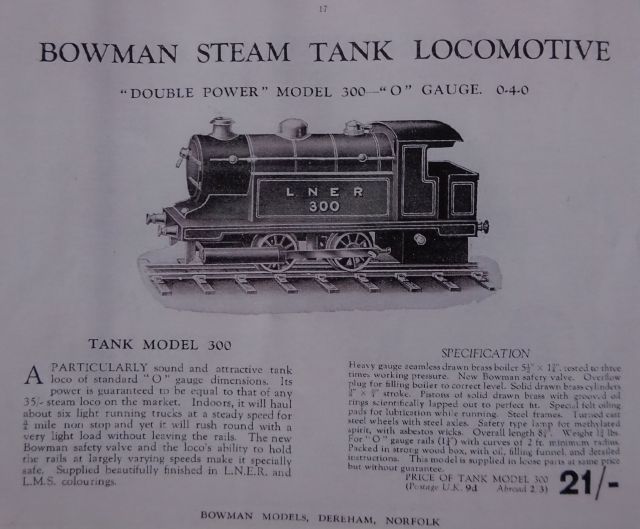 All of the Bowman designs of locomotives a very basic: only single acting cylinders are used which drive one axle only, there is no regulator the speed being controlled either by capping the burner tubes or varying the load, cylinder lubrication is by a felt pad mounted behind the piston. The chassis as bought dirty with the burner unattached. (P002).

Close up of the cylinders and leading axle. (P003). 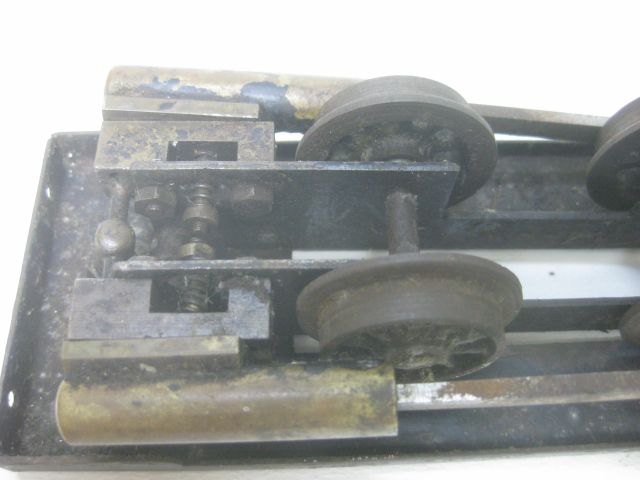 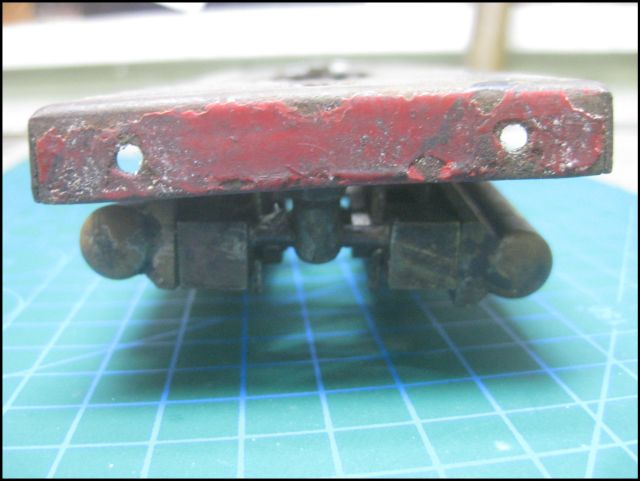 Not being a collector and just wishing to run the model on either my portable layout or garden railway something would have to be done about the wheels. Though nominally the Bowman and my track are the same coarse scale gauge ‘0’ when the Bowman was made the points used had no check rails and the track was considerably higher than in use today. In consequence the back to back measurements of the wheel sets wasn’t important and the height of the wheel flanges impressive which helped the model stay on track at speed going around two-foot radius curves. My track requires a back to back measurement of 28 mm so it looks like the wheels will need new axles as well as re-profiling. (P005). 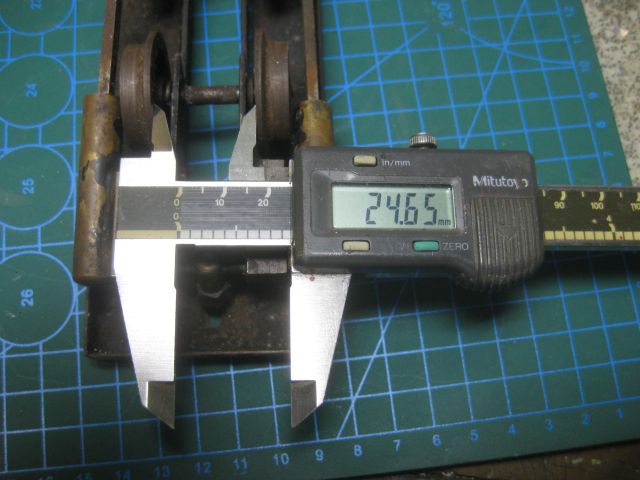 The chassis was checked running on air before taking it apart. It did run, albeit a little roughly at 15 psi. (P006). 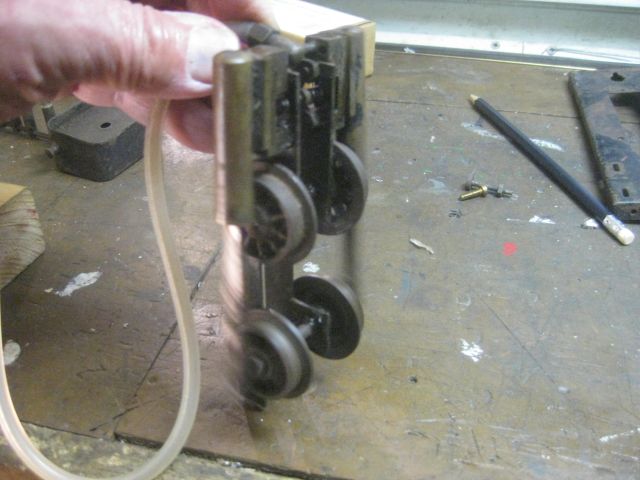 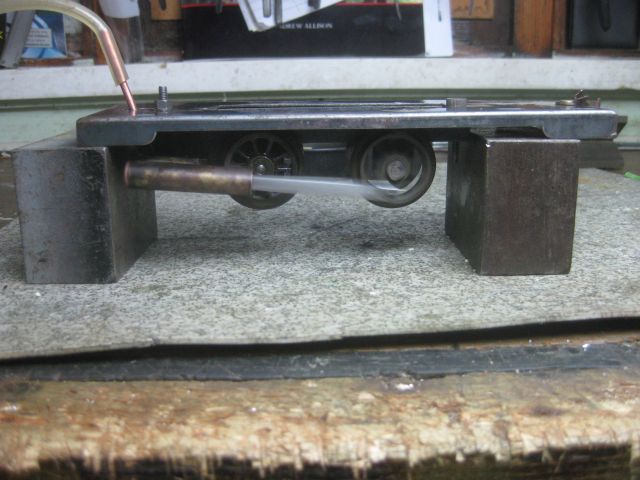 A means of securing the burner to the footplate was made and the chassis was run on air at a steam toy exhibition. (P008). 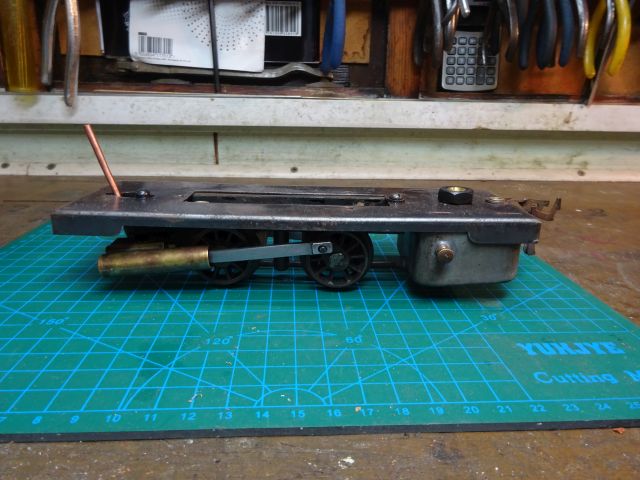 The next few months was taken up in finishing my garden railway. It was only a couple of days ago that looking to fill in time before going to our son’s place for Christmas was any further work done to the chassis. The footplate and burner were removed from the chassis. (P009 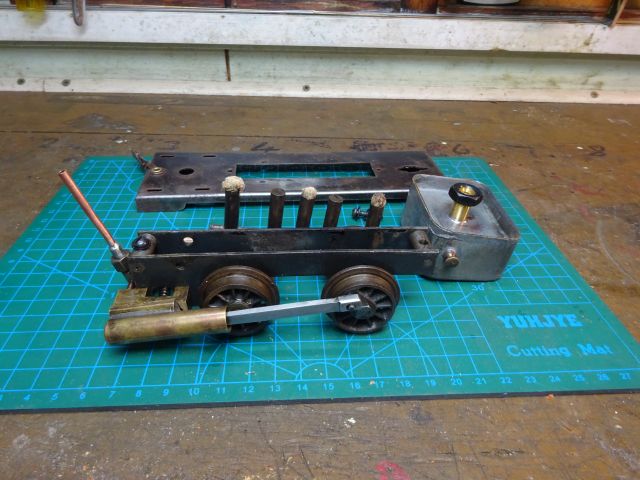 When the chassis was taken apart it was found that the leading wheels were screwed onto their axle and the driving axle wheels had a register that set the crank pins at 180 degrees to one another the wheels being held in place with nuts. There were no exhaust pipes the steam exiting the cylinders between the frames, the frames themselves were rivetted to their spacers. There was a lot of end play between the wheels and the frames some of which was taken up with some circles of bent iron wire spacers which might have been original, if original one had been replaced by a split washer. (P010). 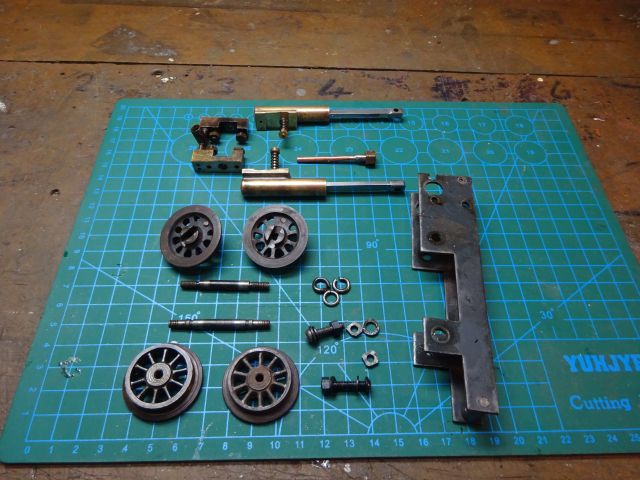 Out of photograph space so I will continue in another post.

After examining the wheels and axles and doing some sums it looked possible that by just lowering the height of the wheels flange and then turning the back of it, it might increase the back to back wheel dimension enough so that new axles would not be needed. This luckily turned out to be the case, a turned leading axle wheel with an original wheel. (P011). 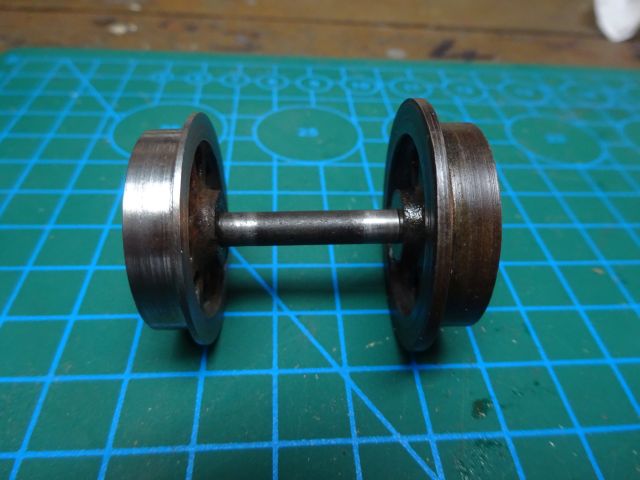 As there were the remains of green paint on the wheels before cleaning it had been the L.N.E.R. version of the model. (P012).

There was a bit of an issue with one of the driving wheels; it was cracked! As the crank pin was still tight nothing was done about this. (P013). 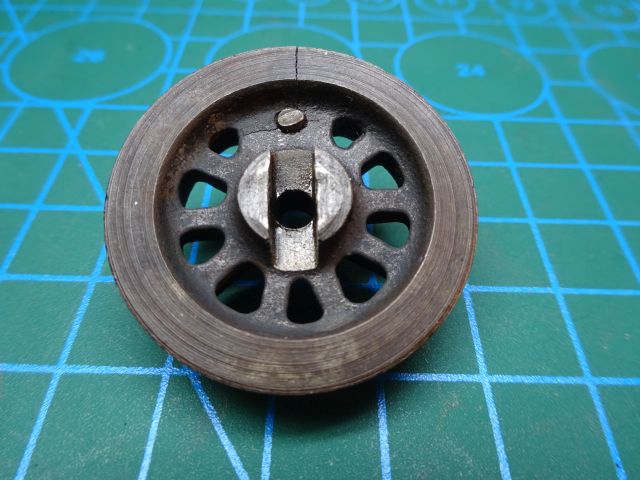 I now had a pair of wheels and axles that would run on my track and I used a R/C electric model locomotive to pull and push the chassis through the points on my garden railway to check it cleared everything. (P014). 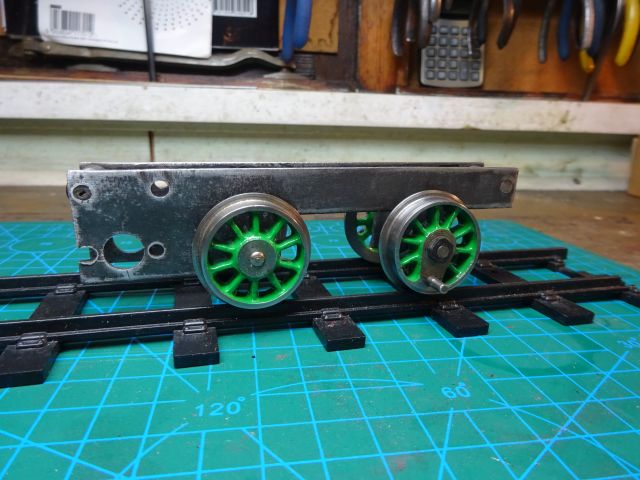 There was a bit of a twisted in the chassis which needed addressing! (P015). 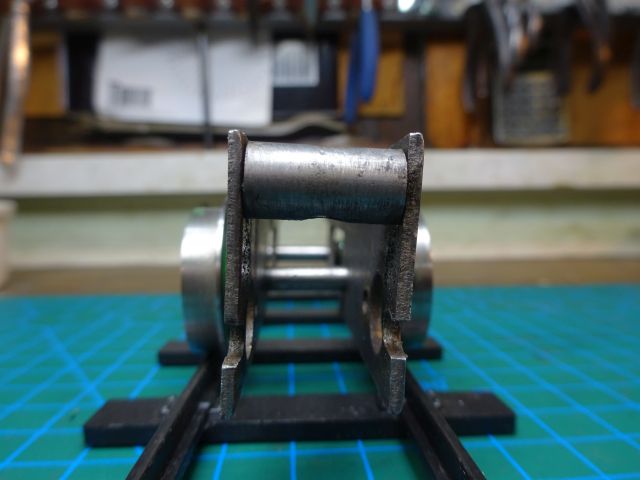 When the frame spacers were removed from the frames it was found that all the holes lined up except for those of the spacers! (P016). 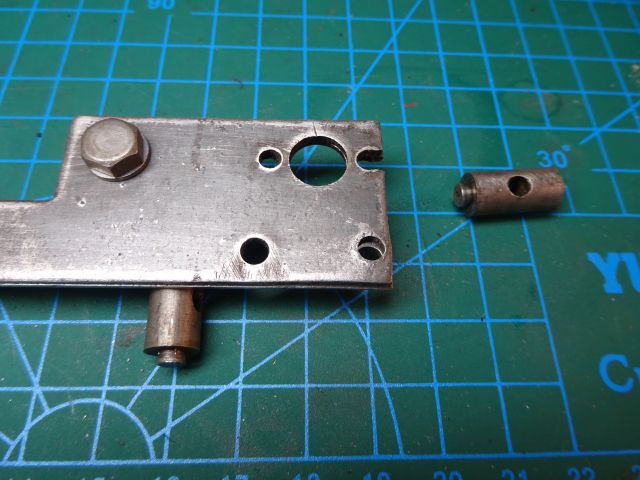 So first the frame spacers were drilled and tapped for screws. (P017). 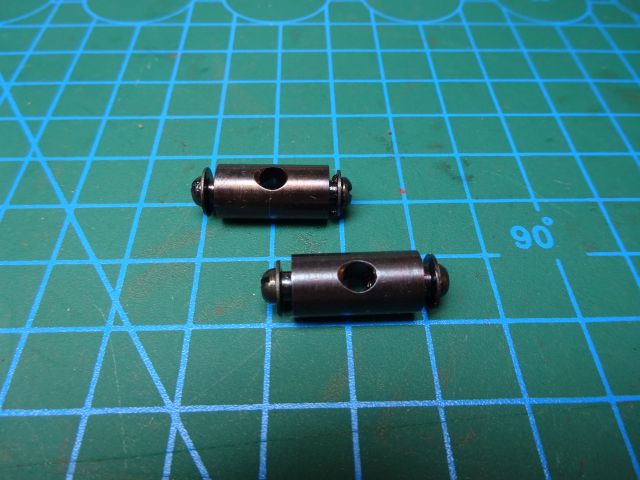 The spacer holes in the frames were plugged and re-drilled, at the same time shouldered bushes were fitted for the axles. (P018). 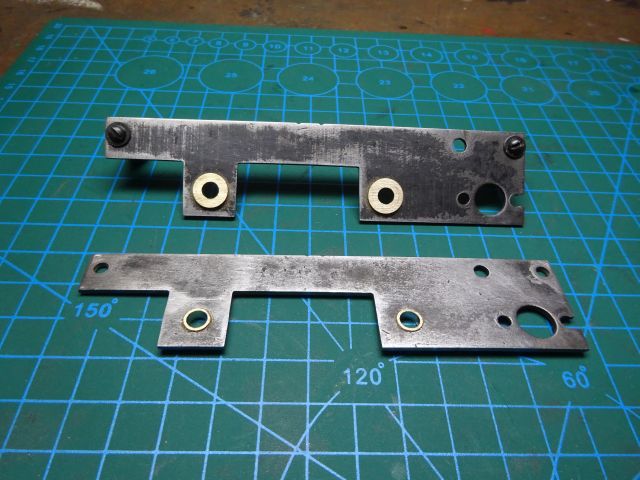 The squared frames and their wheels and axles re-united (P019). 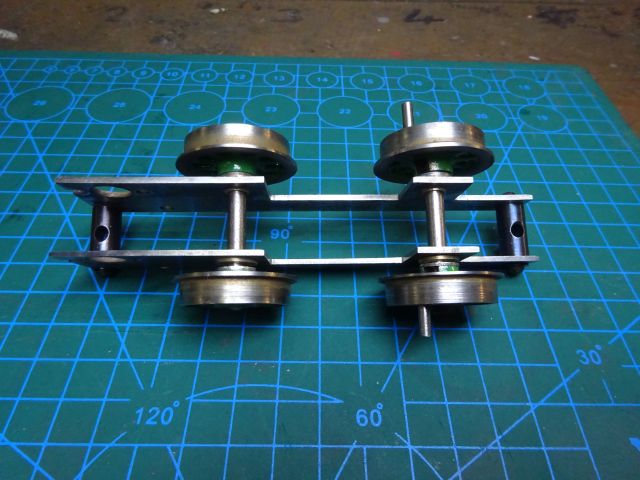 The chassis and its footplate with burner await painting and the replacement of its cylinders which hopefully will happen in the New Year when it will also have to be decided whether to try and copy the original boiler and body or design and make another. Anybody have a boiler and body for a Bowman 300 they wish to part with? (P020). 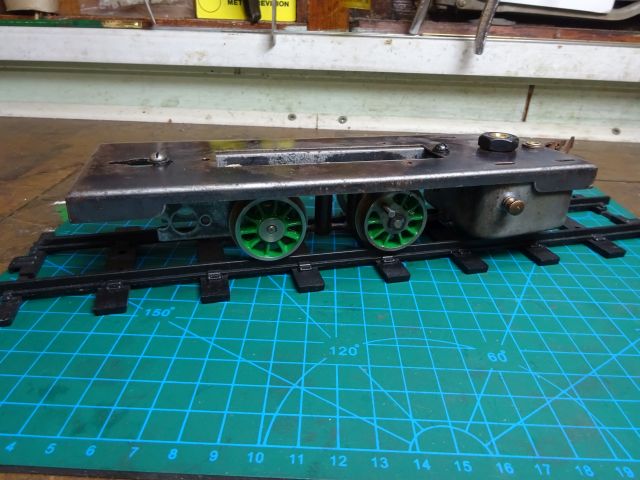 Have a great Christmas everyone and a very healthy New Year!

Tony,
A delightful bit of nostalgia for me. There were lots of Gauge O accounts in Model Engineer.
My lookalike was a second hand Hornby clockwork as a Christmas box and it was later sold as I had 'outgrown' it and it went to a younger lad as there were no such things for sale in the last War.

I can vaguely recall Triang, Hornby, Meccano and 'Juneero' and was it 'Trix'?

Until balsa and rubber became unobtainable, I made KeelBuild kits from Charlie Lutman's Dad in the Model Shop, Newcastle. I had a bit more money left over from growing and selling spinach but most went on my education. There was Woolworth's and for 6 pence in old money it was possible to buy a little hand drill and a baby soldering iron which was heated in the coal fire and held t near a cheek to see if it was hot enough.

As Bob Hope used to say. 'Thanks for the Memory'.

Another interesting posting. Thank you Tony. I also found it a little nostalgic, though my first "Steam engine" was an old Mamod, my mother was afraid we would electrocute ourselves with an electric train set! I wonder if she considered the dangers of steam and fire.

A bit of a video of progress so far. I will now have to decide if I copy a Bowman 300 boiler and body or design one myself.

The model is finished except for paint; a video of the work done is at: